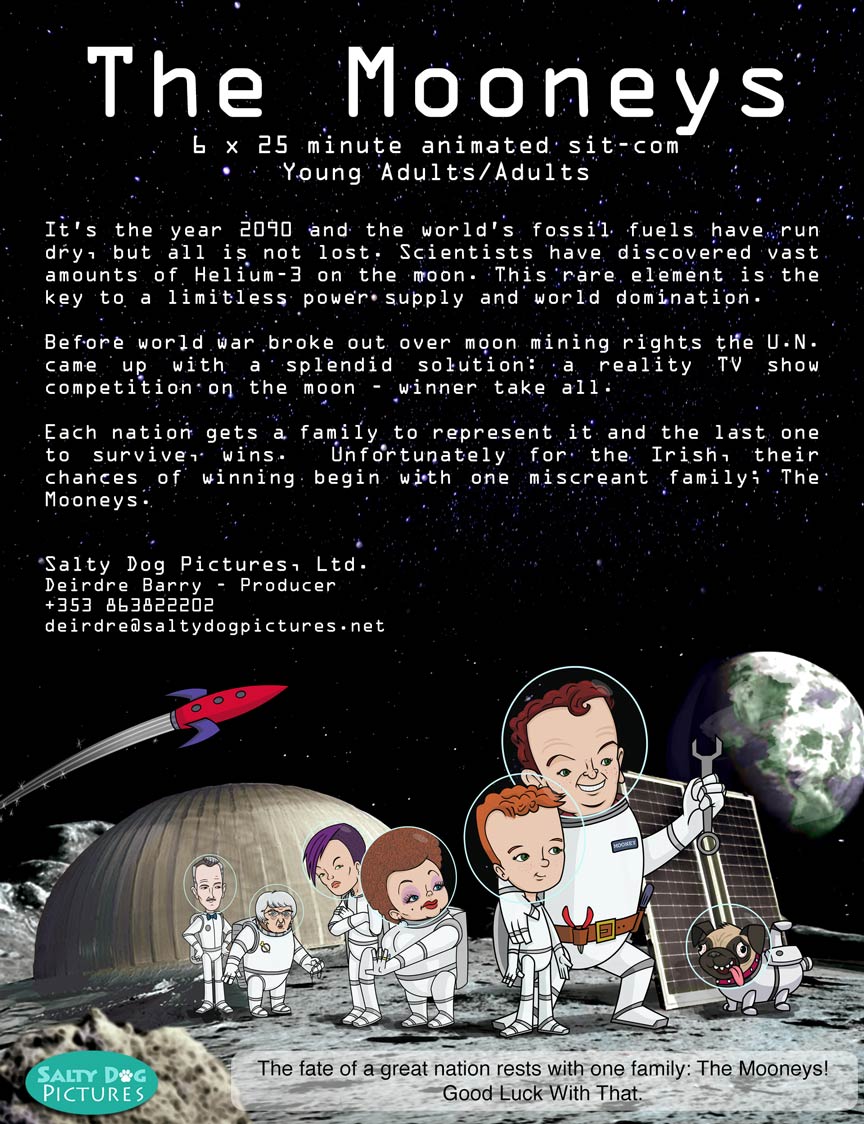 It’s the year 2090 and the world’s fossil fuels have run dry. The earth is plagued by war, mass migrations, and the lack of a good prime time animated series, but all is not lost. Scientists have discovered vast amounts of Helium-3 on the Moon. This rare element is the key to a limitless power supply and world domination. Before World War III broke out, the UN came up with a solution: why not have a reality TV competition? In order to win, each country gets to have one family represent it. They must live on the moon for 24 months without: 1. Breaking the rules, 2. Quitting, 3. Going insane, and/or 4. Getting killed. Few families will last 24 months. Unfortunately for Ireland, their chances of winning begin with one miscreant family: The Mooneys.

The Mooneys is an animation of a unique story on the Moon with a great sense of humor, making you giggle, directed by Clifford Parrott. We could hear from the director after their presentation at Cartoon Forum 2016. We are happy to share his words with you.

Coming from People I Grew Up With

Animationweek (AW): Could you please let us know where the initial idea of the story come from?

Clifford Parrott (CP): The thing with The Mooneys is that it pretty much came from my past, my family, my neighbors, friends, and other people that we had in the neighborhood that I grew up with. I grew up in Boston, Massachusetts, and there are a lot of Irish over there, a lot of Italians, a lot of everybody. I think that is what creative people do; when they create, they create from things that they understand and from their experiences. That is where The Mooneys came from, so it is from my time growing up in Boston.

AW: I would like to ask you about the main character. How did you develop the unique character?

CP: I knew you had to have it based on a family because it was just something that made sense. I didn’t want to do it on spies like Archer. That kind of covered that genre already. And then I started figuring out that the people that made me laugh the most were the people that I grew up with. The Moonies are based on pretty much people I knew. So I said to myself, “I’ll create this as a family with the last name of Mooney and they live on the moon.” It began as a bit of a joke and built up from there.

AW: In your animation, there are some funny characters from the world. How did you design them?

CP: The humor comes from the different interests up there on the moon, because there is a lot at stake. People want different things and everyone’s vying for power. National stereotypes are really funny because we see see other nations from our own national perspective. You’d see somebody from say… Mexico a certain way. The first thing that comes to mind is a Sombrero and tacos. Stereotypes are a sort of shorthand that audiences get instantly because they’re based on real traits and they can be very funny if you play them right. Shows like The Simpsons, Family Guy and Archer take advantage of national stereotypes. They take these characteristics that each nation has, they play off of them one another and have good fun with it. 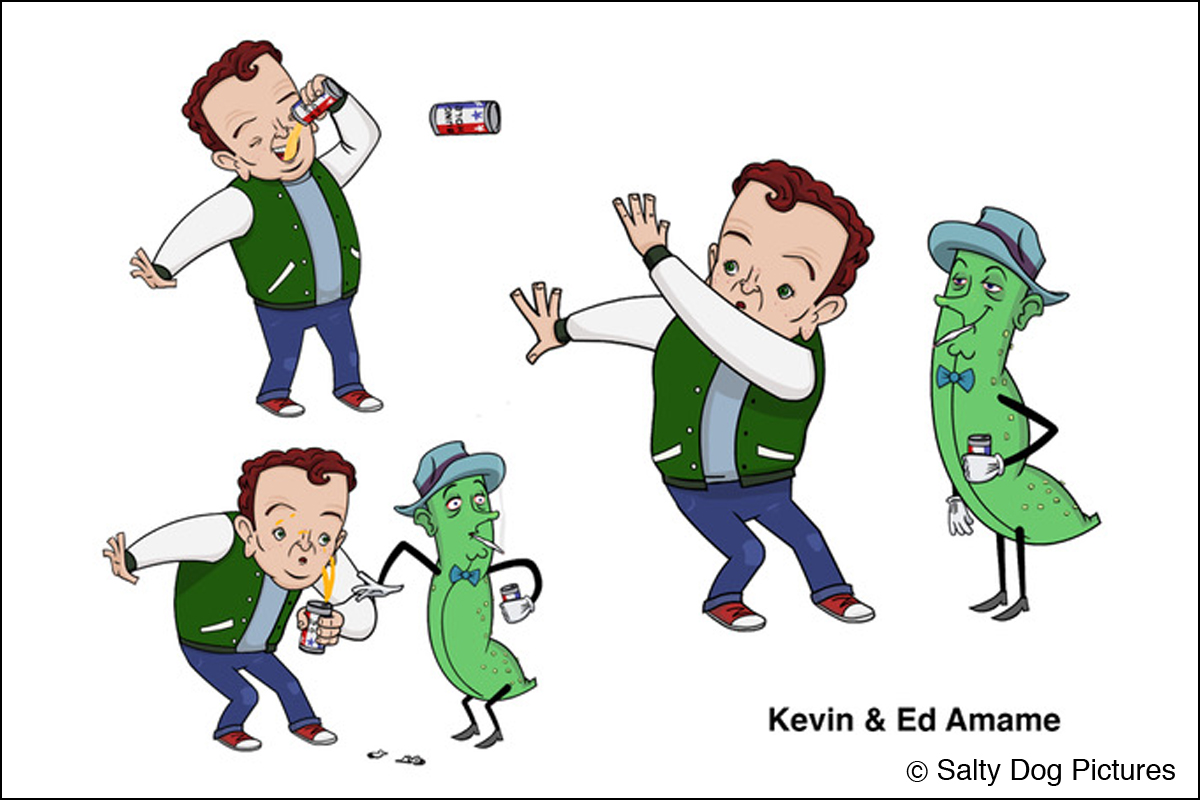 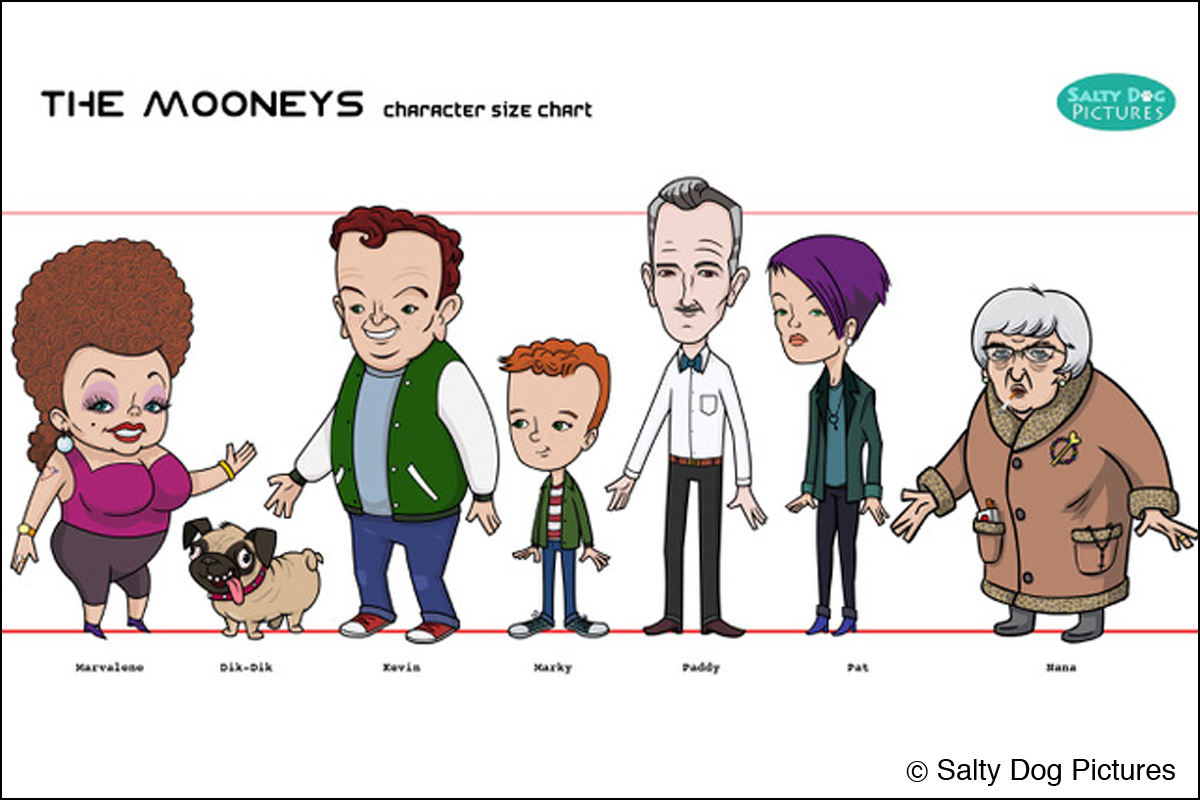 AW: Where did your sense of humor come from?

CP: Tough to analyze it because doing so would probably destroy the humour. I don’t know I’ve just always thought certain things are funny. I think a lot of it was from watching Tex Avery’s cartoons. I grew up on Bugs Bunny, Daffy Duck, that type of thing. I really enjoyed those types of cartoons. Bob Clampett is another one of my favorite animation directors. If you want to see some amazing, wacky and far-out stuff, I recommend watching a Bob Clampett. Chuck Jones too. Mad Magazine was another influence. I used to read those mags a lot – loved Don Martin.

AW: What kind of message do you want to convey to the audience through your stories?

CP: There’s not much of a message per se, more of “watch and be entertained”. I wouldn’t preach anything. I wouldn’t even try to. (Laughs)

AW: What kind of support are you looking for?

CP: Well like I say, we are fortunate that we’re living in Europe and not the United States, where there is no support at all. We have created shows and financed our own projects in Ireland, Our next step is to get a broadcaster. We are in discussions right now with RTE2, which is really good, and would like to do something with BBC, Comedy Central or even Adult Swim.