Each night, when the Joan Miró’s museum closes its doors and all the visitors go home, three little paint drops come alive inside the paintings and go adventuring through the amazing world hidden in the museum. The Mironins travel in and out of the paintings, exploring the endless possibilities of the images and making new friends with whom they go on frenetic and surreal adventures. During their escapades, the Mironins’ creativity will be put to the test and they’ll have to wriggle out of trouble using their imagination and working as a team so as to protect the fascinating world of color in which they live, just in time for the arrival of new visitors, as if none of it had ever happened. 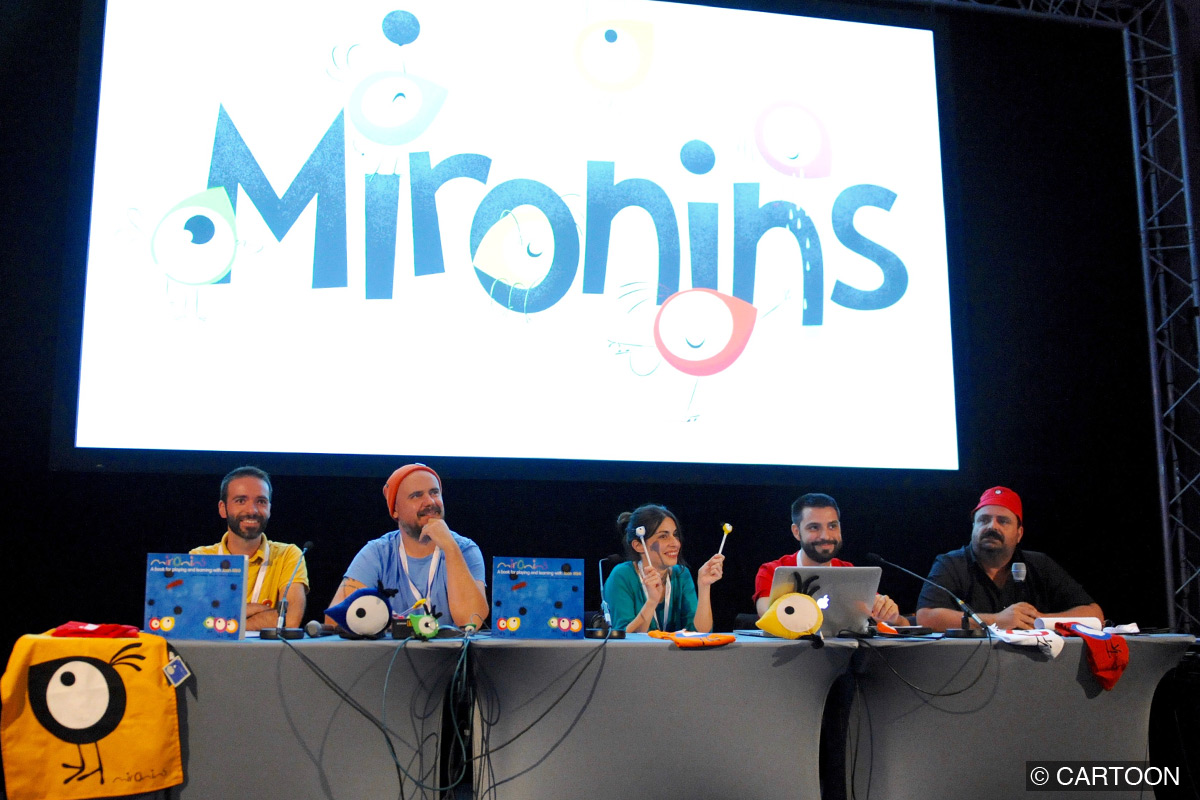 Mironins is an animation project based on a successful activity book for children titled Mironins. A book for playing and learning with Joan Miró. We had the opportunity to hear the story behind the project from directors Mikel Mas Bilbao and Celia Rico Clavellino, and co-producer Iván Agenjo during Cartoon Forum 2016. We are happy to share this interview with you.

Animationweek (AW): The story of the animation is based on a children’s book, isn’t it?

Celia Rico Clavellino (CC): Yes, the characters were born in a children’s book. It’s an activity book. One of the producers used to work in a museum, and his workmates decided to make the activity book because they realized that there wasn’t a good book that explained the arts to children, and so the book was successful.

Mikel Mas Bilbao (MB): They created those characters, Mironins, in the book.

AW: Could you please tell us the attractive features of the story and characters?

CC: When you go to a museum, you just see the painting. You cannot touch and interact with them. What we are proposing through this project is that art is alive. You can go inside of the living art world. I think that, for me, the most attractive feature is this concept of experience. It’s about enjoying diving into the world of the painting, not just see it or take a picture of it in a museum.

AW: Can we meet new characters and stories in the animation series that are not from the original book?

IA: In the animation series, we have the three main characters from the book, called the Mironins. In addition to the Mironins, there are a lot of other characters that live in the different paintings.

AW: How are you developing the new characters and stories for the animation series?

IA: Wuji House is rapidly creating the whole universe of the series, and they are drawing the new characters based on existing pictures. We have a team of illustrators who work on that.

CC: This project is about imagination and our creativity. When you see a painting, you can think about a lot of ideas, because the interpretation of a painting is open and free. So we are trying to make all these characters give children opportunities to imagine and push their creativity.

IA: The main purpose of the project is to give an approach for art, for kids. We aim to make kids understand that art can be funny, and there are a lot of things that you can do with art in that sense. That’s why all the paintings in the series become alive. Children will see how the characters move and act and use their imagination to go further – not only seeing a painting, but going further in the experience.

AW: The stories of the Mironins happen only during nighttime, doesn’t it?

IA: Yes. The Mironins are supposed to be a secret, so nobody knows that they exist, except for children. In order to be consistent with that idea, we cannot allow the Mironins to appear while there is people in the museum, so we decided that all the adventures could be from the time the museum closes its door until the time it opens.

AW: What kind of support are you looking for at the moment?

IA: Mainly international broadcasters who want to join the project, and also distributors and licensees for merchandising.

(Mikel told us that Televisión Española, the biggest and government owned broadcaster in Spain, has decided to participate in the project after Cartoon Forum 2016)

AW: If everything goes well, when we can watch Mironins?

MB: If everything goes well, we should be finished by Christmas in 2018, which is roughly two years from now.