“It is the use of [wood] that is fundamental in resembling a part of the intended objects we want to create, rather than simply copying the shape of the objects.”

Please let us know the reason why many characters are made of wood, and wood being frequently utilized in the design and materials of sets in your films.

YASHIRO Takeshi: Simply because I love wooden items. Wood has various visual characteristics which over a long time of use gives it additional charm, so that I think it is the use of the material that is fundamental in resembling a part of the intended objects we want to create, rather than simply copying the shape of the objects.

When making sets, we utilize the qualities of wood to show everyone the appeal of a wooden house. The reason why we use wood for our characters is the same. Human skin is regarded as the motif here, but we use the attractive characteristics that wood innately has, such as how they get decayed, scratched, or shaved, to enhance the personalities of the characters. In my opinion, works having these many symbolic analogies can be very expressive for representational art.

Wooden puppets play a very important part in my work, such as the leading and supporting characters. As the puppet’s faces have simple shapes and movements, it is difficult to imitate human faces. However, the textures of wood have a lot of depth that is common to the feeling of depth in human skin that is required for creating visually rich work.

For example, in live action movies where an older actor performs, the profoundness of that actor’s life would often lead to profoundness in the work itself. In stop-motion animation, puppets are created from scratch, so it’s easy to obtain a youthful, fresh and beautiful attractiveness. However, it is generally difficult for puppets to reflect how they have spent their “real lives” outside the work into the roles they are acting, whereas real human actors can do it naturally. Therefore, by using the natural character that the wood has obtained over the years, I’d like to give the characters in my work the depth that a seasoned actor can reflect into their work. 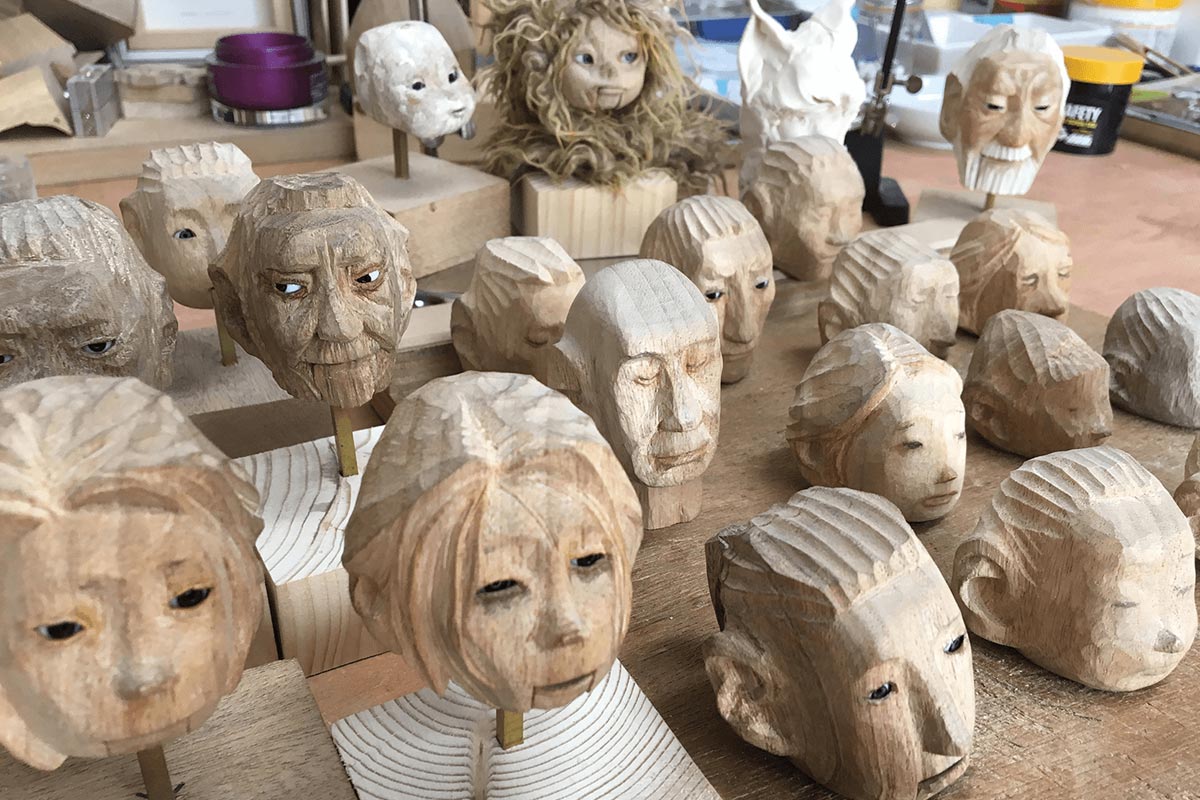 Please let us know about selecting the wood as a material.

YASHIRO Takeshi: I haven’t yet created as many wooden characters as the average wood carver would have, but my criteria in choosing wood have changed in just over 7 to 8 years of my experience in creating works. For example, in the most recent work, GON, THE LITTLE FOX, everything is made from the wood of camphor trees because they can be cut and sharpened easily. Even using the same kind of camphor trees, there are features such as the deep redness and the density or roughness of the grainy texture being unique to each tree, and I make use of these characteristics in producing work. In Moon of a Sleepless Night, chestnut trees were used to make the male characters, and walnut trees with dense, grainy textures were used to create the female and child characters. Chestnut trees have coarser, grainier textures than camphor trees. They are crackly, and their grainy textures are thick and coarse.

Do you change the film’s direction after you take a look at the completed puppets or sets?

YASHIRO Takeshi: I do it to a great degree. In the case of work that I write a script for, after outlining the story and sharing it with my staff, I consider “what kind of actor would be assigned to play this role?” while creating one or two heads of the main character puppets as the first step. So when the main actors are somewhat decided, we can further imagine the scenario and then see what the story would look like. From there, we draw a storyboard and make decisions on the detailed staging.