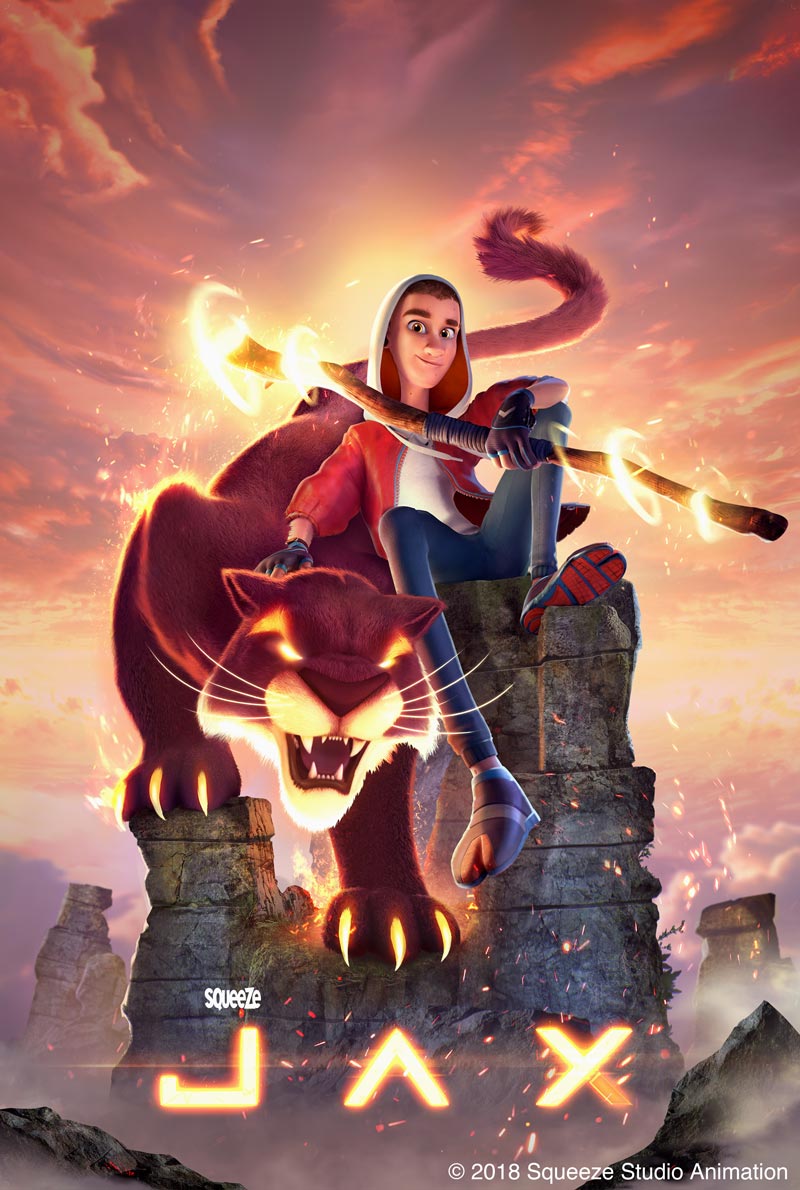 Magic doesn’t exist. Everyone knows that it disappeared more than a thousand years ago on the day Merlin, the greatest sorcerer ever, vanished. Yet above the highest treetops, away from prying eyes, an extraordinary conflict is unfurling. And the result of this battle may just change the world forever.

Squeeze Studio Animation,one of the Canadian studios I’m turning attention to, entered the stage of Cartoon Forum 2018 with an exciting fantasy adventure story animation, JAX, which won the Cartoon Connection Canada Awards 2017. The dynamic action of the main character in the teaser and the magnificent story setting that they explained in their pitch raised my expectation for JAX, so I interviewed Patrick Beaulieu, Co-founder and Creative Director of Squeeze Studio, to hear more about the project.

Patrick Beaulieu: The initial idea of ​​this project came from the desire to create a world filled with magic, where the characters could feel and interact with the energy in the environment around them. Through not only humor but also mystery, adventure, and emotion, we wanted to satisfy our inner youth, who loves action and comedy. Our goal was to create a wide universe that would serve as a pretext for epic action scenes, especially where it would be possible to see a league of heroes evolve through a rich and multi-level narrative arc. The idea of ​​height and climbing has quickly positioned itself as one of the strong elements of this universe, allowing us to develop a very distinctive visual signature. Adding the closeness to nature and the relationship with animals, by continuing to evolve the initial idea, we gradually found the heart of the project by connecting all the elements.

HN: We see very dynamic action in a fascinating visual fantasy world in the first trailer. When making those visual designs and actions, what did you put a great deal of effort into?

Patrick Beaulieu: We wanted the first trailer to showcase a very powerful action scene that would transport the audience into the JAX universe. A character-driven sequence where we could see our hero climb a huge tree or tower racing at full speed while fighting against enemy forces. In this piece, we had the desire to focus on Jax, his relationship with his cougar and his ability to climb. In a unique environment, we played with the camera angles, the strong silhouette of the tree and the beauty of the surreal clouds, to emphasize the heights, slowly revealing a fantastic new world.

We put a lot of effort also into Jax’s distinct and unique way of moving and climbing. We wanted something dynamic, fluid and gorgeous. We gave him the ability to climb the towers at maximum speed, pushing all boundaries that exist.

Our team worked hard on this sequence and we are very proud to present this very unique and distinctive visual signature.

HN: It is a very long continuous liner story of 26 x 22′. What things do you take care of in making the story?

Patrick Beaulieu: Always start with strong pillars or foundations. Digging into the characters and into the backstory, prior to starting work on the storyline, was something very important for us. My partner Denis (Squeeze’s co-founder) and I spent a lot of mornings and late evenings discussing every single detail that would define our characters and universe. We wanted to create something unique, fresh and smart.

We wanted to give depth to the characters so that their actions and motivations serve the needs of the story as well as its evolution. Since Jax is our hero and central to our series, other characters must care about him and be interested or involved in his journey. Jax has to face the limits he has imposed on himself and the heart of his quest rests on his will and his deep desire to evolve. That’s why we bring several other characters who will either guide and help Jax overcome his fears, or try to influence him negatively. This amalgam of friendship and confrontation will allow Jax to make his own choices and become the hero he will become.

Without being pure fantasy, JAX has roots that are a thousand years old, drawing on the most fascinating medieval legends. We love stories that have depth and we firmly believe such stories aren’t just for adults. On top of action, humor and tons of twists, we also want to offer the future young JAX fans a story with substance, something that will arouse their curiosity.

HN: Are there any new challenges or difficulties you faced in telling the story so far?

Patrick Beaulieu: I have to say that the story has gradually grown by itself. The challenges and difficulties were more about motivating all of the elements and bringing 100% coherence in every decision we took. Our goal is to build a world with a strong storyline, where characters experience emotionally rich situations that will allow them to learn and grow throughout the season. Attaining this precision where everything fits perfectly is probably the biggest challenge.

The second challenge of a global narrative arc series is to keep the audience on the edge! Along with the adventures and intrigue we follow, we want each episode to gradually reveal the various facets of the characters’ personalities and their motivations, and to surprise the audience with unexpected reversals. To do so, we try to put ourselves into the shoes of the audience and create a series that will engage the viewers from the beginning to the end!

HN: If any, could you please let us know what part of the animation series do you especially recommend the audience to enjoy?

Patrick Beaulieu: JAX is a TV series full of depth where the characters enter into an engaging quest.  It brings numerous adventures that are as thrilling as they are surprising. Epic action scenes rub shoulders with passages that are full of humor and emotion. I have no choice but to answer that if you want to fully enjoy the series, you will have no choice but to watch it from beginning to end!

HN: I feel a strong affinity for the idea of the story with video game elements, such as the exciting quest in a fantasy world. Do you have any plans to develop a video game as a venture into cross media development?

Patrick Beaulieu: Although Squeeze is not a video game company, we want each of our original creations to become a global franchise, opening the door to all possibilities. Many members of Squeeze’s team come from the video game industry and are familiar with all the elements that create an exciting universe for gamers. Even if the world of JAX was not originally designed to be a game, I must admit that some central elements could be transposed easily: Two leagues, confronting each character, fighting with his own avatar and all sharing the same goal of climbing towers to conquer them using their unique powers … We cannot predict the future, but let’s just say that JAX offers all the necessary ingredients to create a fantastic game!