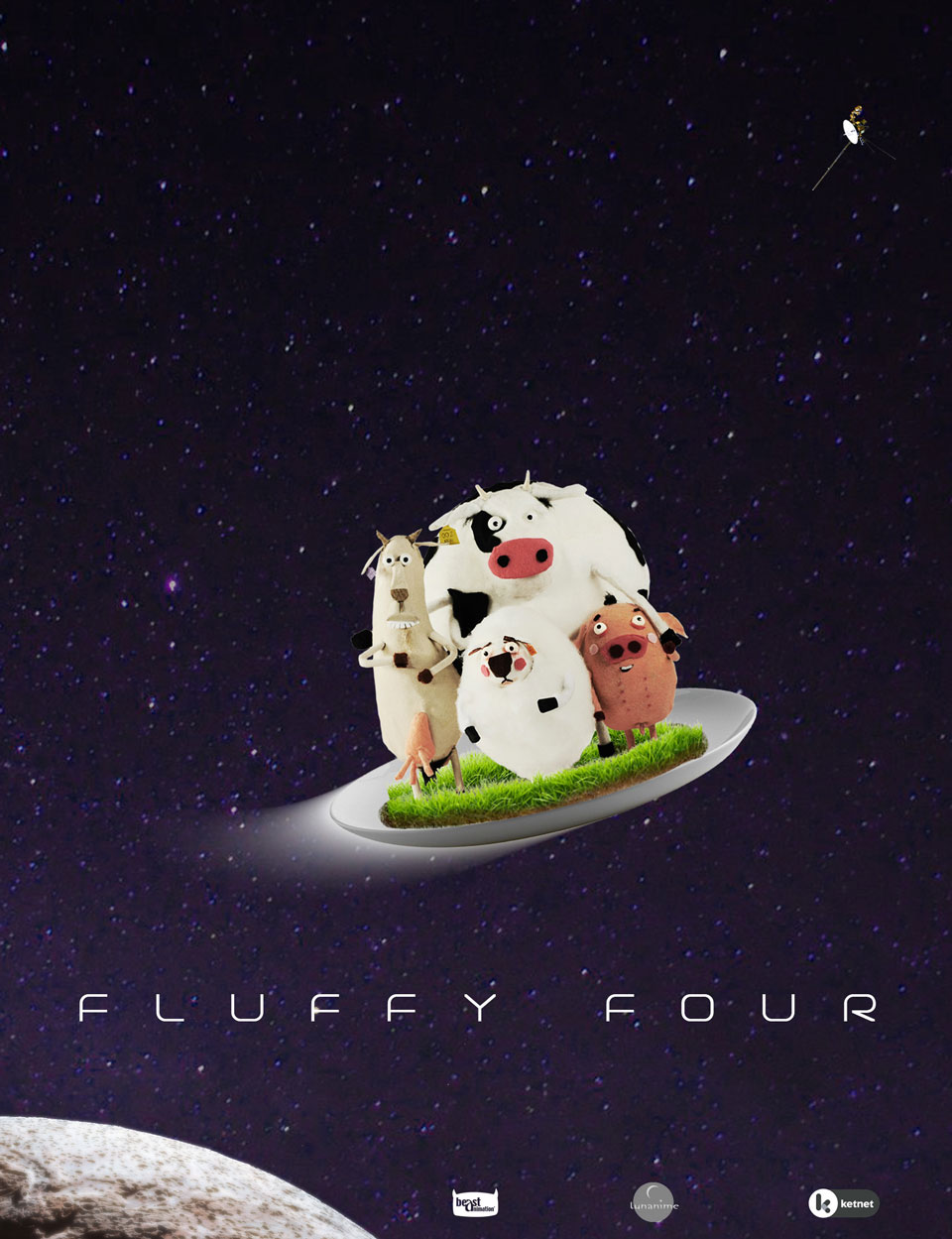 1977 – Voyager 1 & 2 are launched into space. To each spacecraft NASA attaches a golden record with images and sounds of Earth. A message from our planet to any possible extra-terrestrial life out there. Years later – in the barn of a small farm – a goat, a sheep, a pig and a cow are sitting in front of a computer and learn about the Golden Record Project. However, they’re shocked to discover that some of the most important sounds are missing. There’s no mooing of a cow, no bleating of a goat and no squealing of a pig! How’s this possible?! The Fluffy Four decide to build a spaceship and embark on a mission to boldly go where no farm animal has gone before and add their sounds to the records. 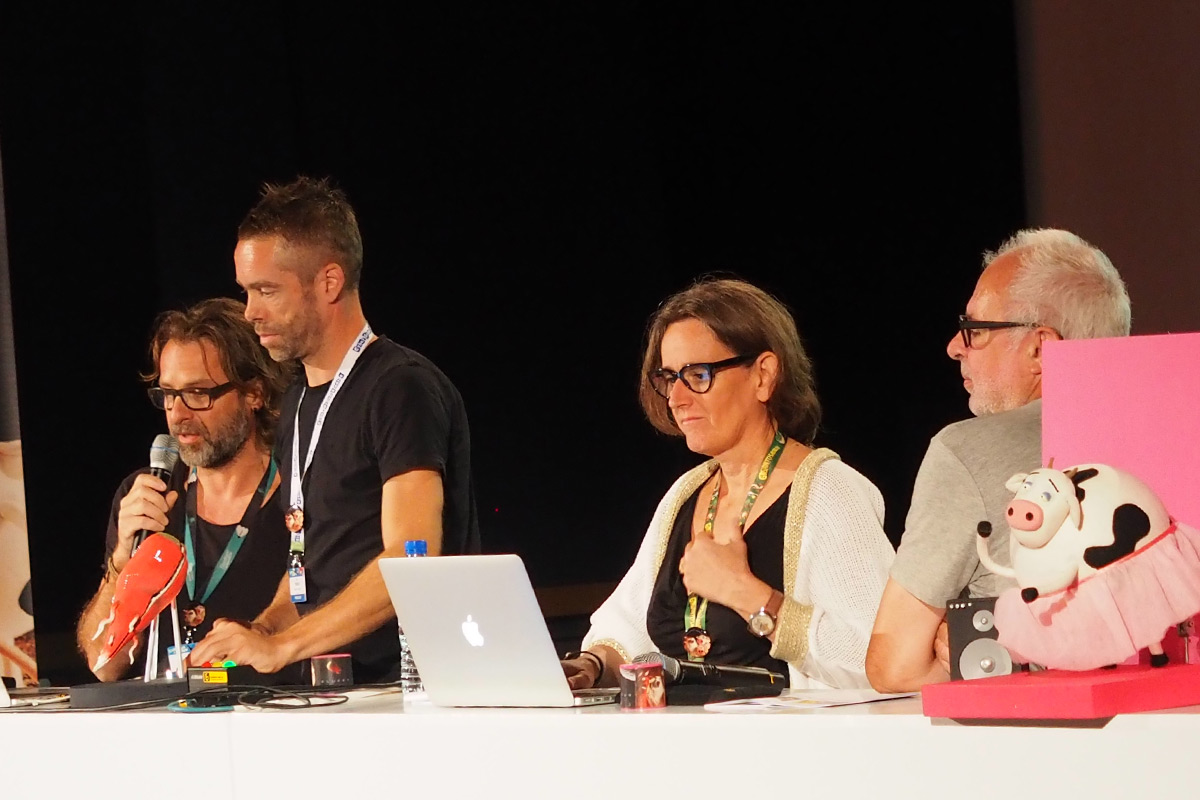 Fluffy Four is a stop motion animation series project with a good sense of humor, which was pitched at Cartoon Forum 2018. The story centers on four animals, a goat, a sheep, a pig and a cow, who go into space to add the sounds to their voices to the Voyager’s Golden Records, launched by NASA about 40 years ago.

We talked to Ben Tesseur and Steven De Beul from Beast Animation (a leading stop motion animation studio in Belgium) at Cartoon Forum 2018. They are the creators of the series, and are both the writers and directors. They share with us how this funny comedy project with a unique story setting has started and how it’s being developed.

Hideki Nagaishi: Where did the initial idea of the story come from?

Ben Tesseur: The main four characters have existed for a long time already, for about 8 years. We created those characters for a completely different project that was never released, but we did develop the four animals and one bad guy. So, when the old project did not go through, we decided to keep the design of the puppets because we really liked them. For years and years, they were in a box in our studio.

Last year, we started talking about creating something new with the same characters design, and as very often it goes, at least for the way we work, we started a stupid and silly conversation about the Voyagers and the Golden Record Project by NASA. Steven said “There are not only images, but also music on the records” and I thought it was music by the Beatles. So, we tried to imagine a Rolling Stones fan, discovering that only Beatles songs were recorded on the Golden Record. How would this fan react? That’s how it started. But after some research, we discovered that there was neither Beatles’ nor Rolling Stones’ music on it. There was Bach, traditional folk music and animal sounds, but no goat, no pig and no cow sounds. That is where our idea came from. We could imagine that our four animals build a space ship and go off after the Voyagers. It’s been already 41 years since they launched… 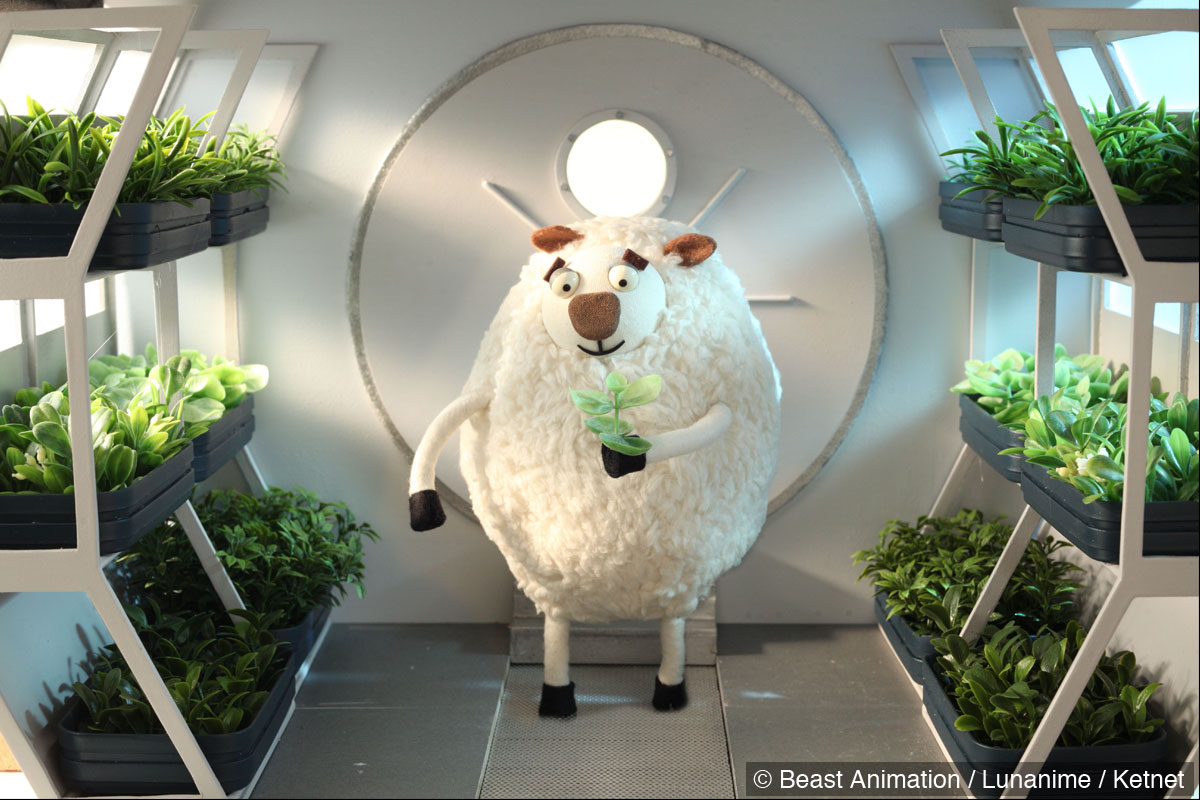 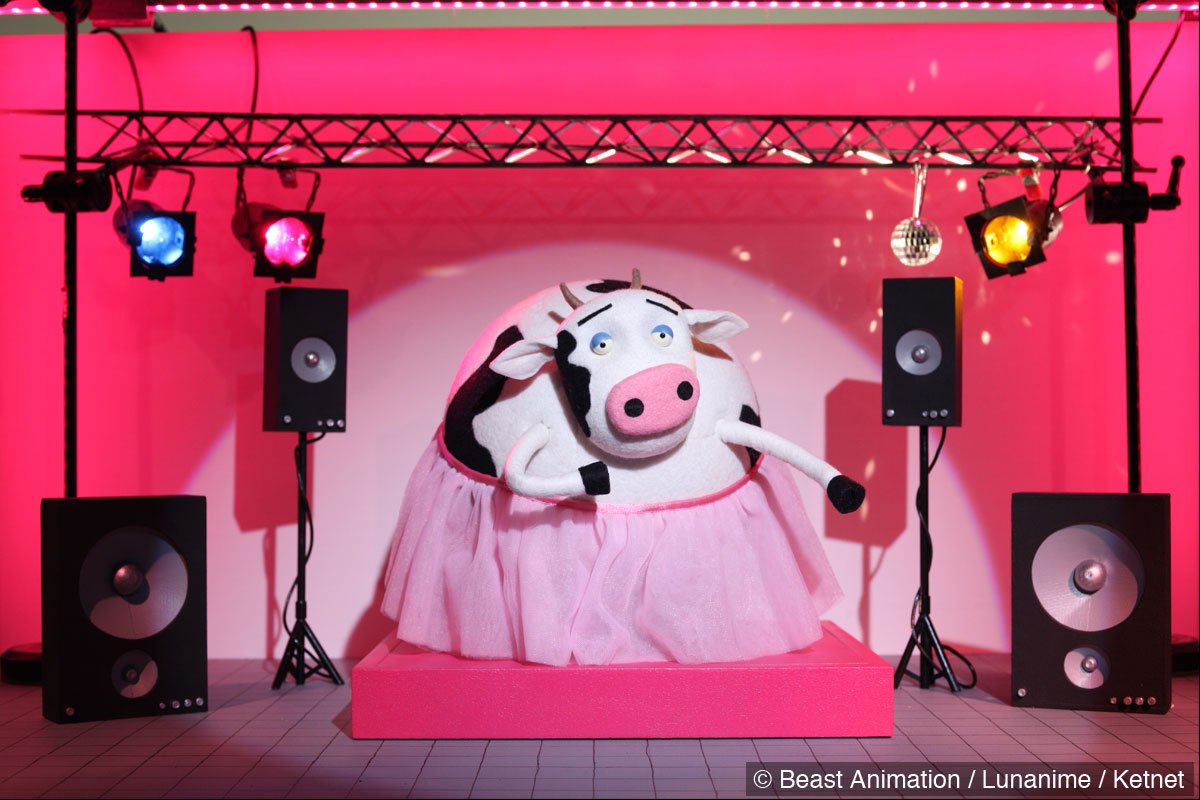 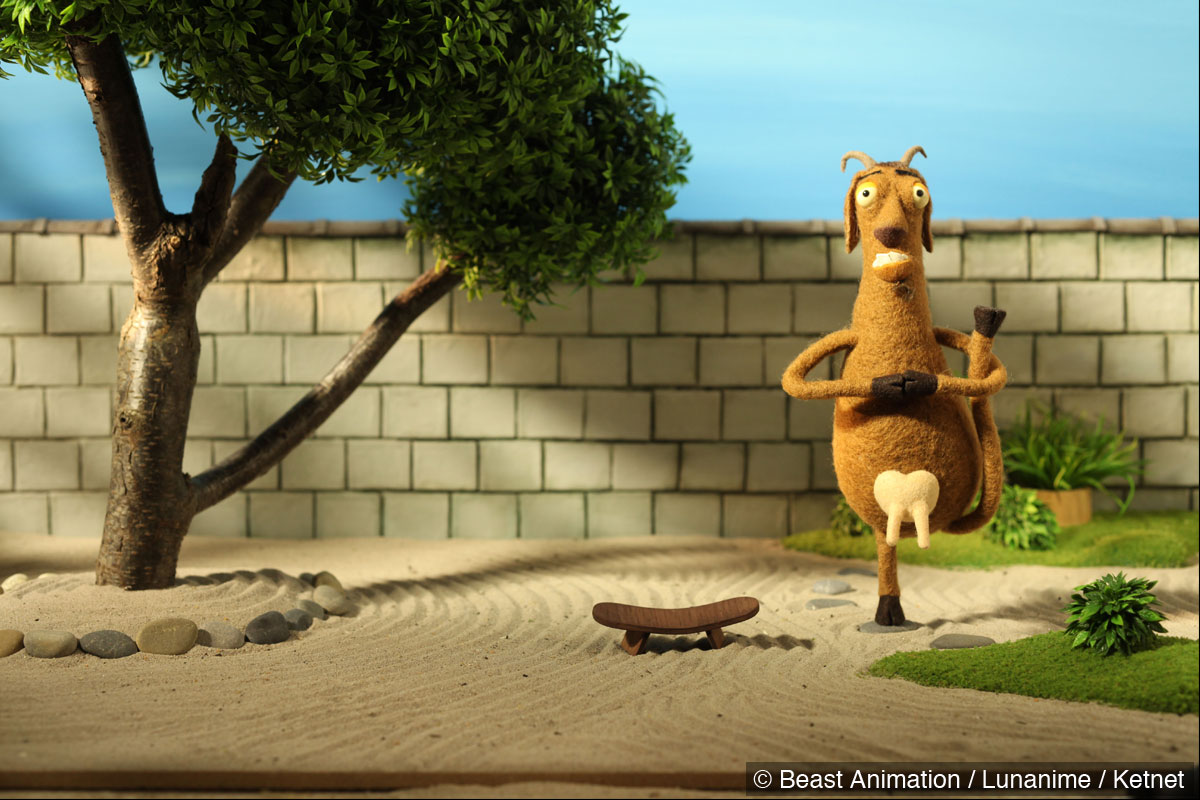 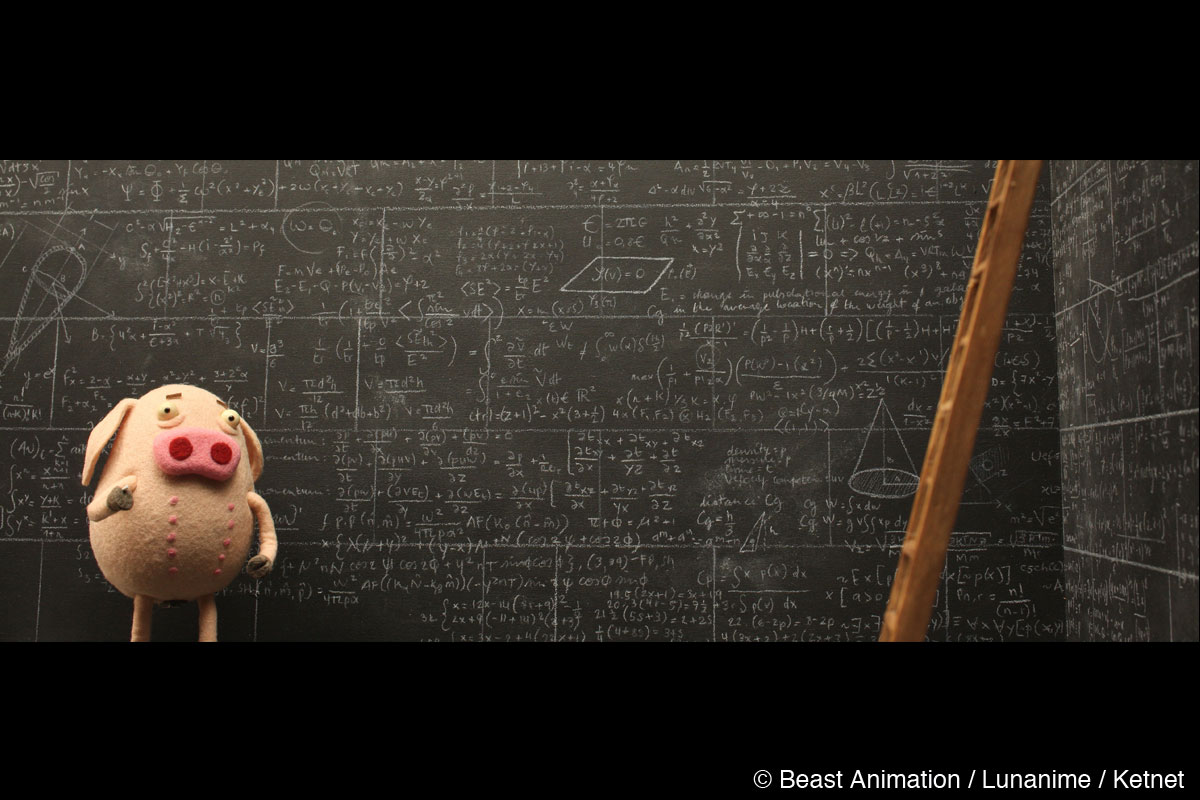 Hideki Nagaishi: You mentioned that there is humor and science during the presentation. Could you please let us know about the science in the story?

Steven De Beul: These four animals are traveling to space. They see different planets and they discover the universe. Maybe there is a way to trigger youngsters to go find out what the Voyagers were, what is interstellar space, what is the universe, how big is the universe, and what is our position as humans or animals in this complete universe. Those ideas, and a bit of science, are what we try to do with the animals themselves. One is the biologist, so he grows plants to eat in the spaceship, another one is a physicist, so she explores the possibilities of the solar energy engine,and so on.

Ben Tesseur: When we started developing the ideas more, we were thinking about what each animal should be doing on the spaceship. So, we said that one should be a mathematician and one should be an engineer. Then, we found out that if you go on NASA’s website, and look at the profiles they look for in astronauts, they are the same kind of profiles/specialties we gave our four characters who are sent into a space. That’s another link with science we really like.

Since we started working on the idea, we’re also following NASA’s Podcast and Instagram. It is really amazing what is going on. But for us, it’s also a very useful source for writing a comedy show. There are a lot of unexpected and sometimes silly things that happen when humans invent and discover things they don’t know. Then, we tried to use the stuff that happens in reality and rework it in the series, like the difficulties and effects of zero-gravity and what the lack of gravity in space does to bodies or liquids, for example. There is this one story of a NASA launch that has to be canceled at the last minute because woodpeckers took out the insulation material of a rocket. We really like these stories, it’s science and it’s humor. 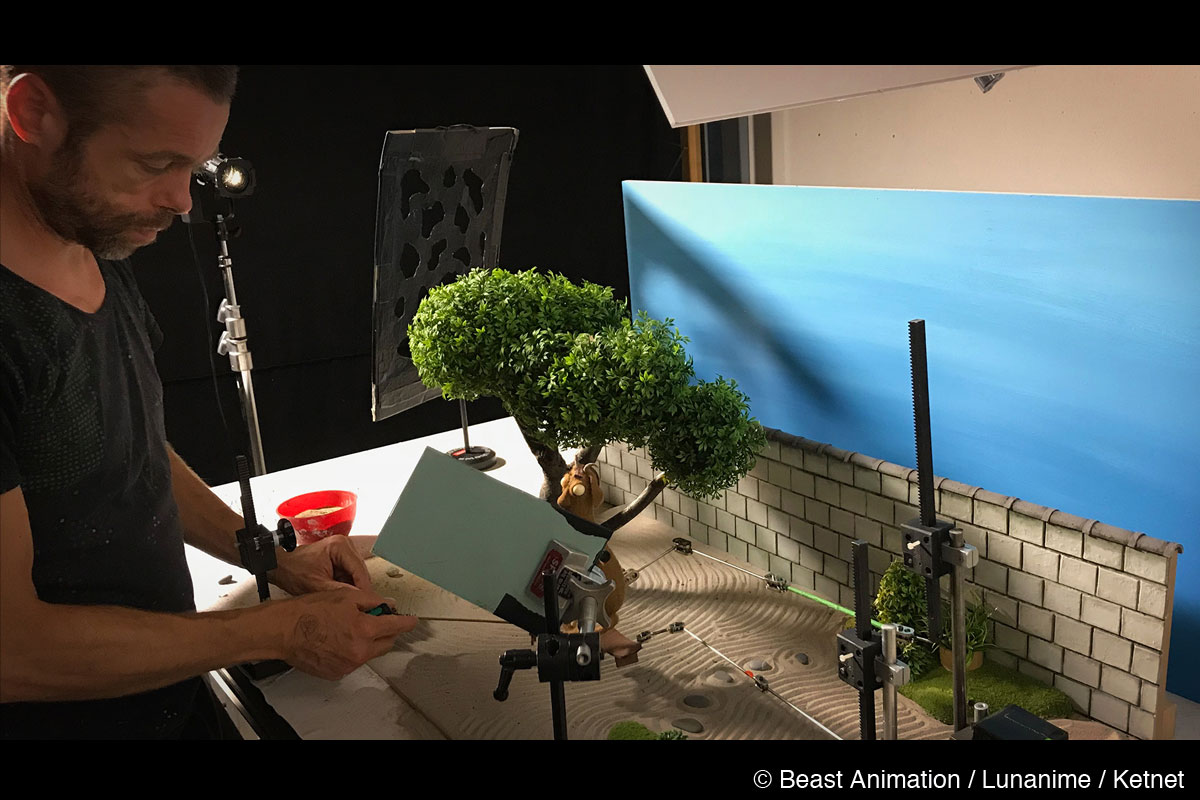 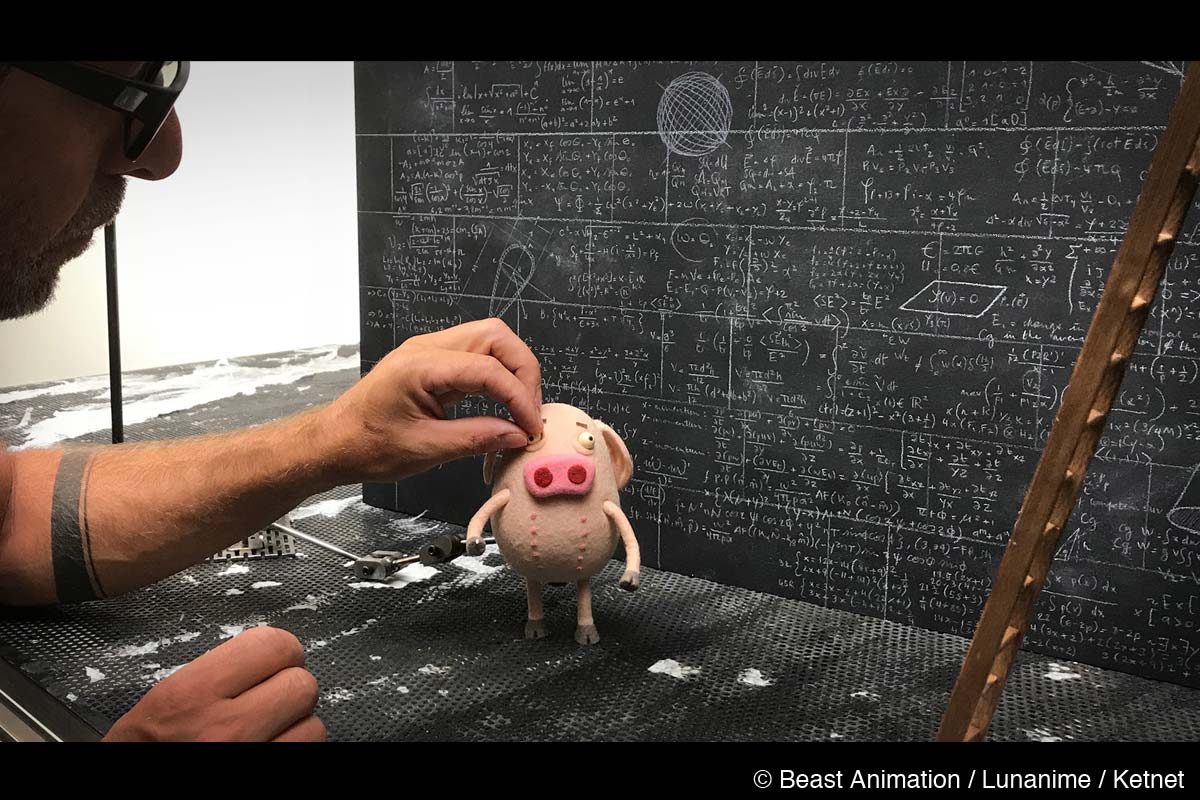 Hideki Nagaishi: The next question is about the humor. I want to know where your sense of humor comes from, such as from daily conversation, or discussions together to come up with a unique idea, and so on?

Ben Tesseur: The sense of humor will come from the connection between the four characters, so we developed for each one of them a serious role: what their official function is on-board. But also funny hobbies, where we think a part of the humor will come from. Also, sometimes we want to have external elements coming into the spaceship to create conflict. But most of the humor will come from conflicts and silly solutions to get out of these conflicts. Another element is the spaceship, which is really a huge enormous thing with a lot of corridors, rooms and halls inside, so there will be some quite unexpected places, like an indoor ski, which is not really normal for a spaceship to have!

Steven De Beul: Also, the animation will have to put an accent to its humor. We are going to develop an animation style that is very visual, maybe a bit slapstick, but very visual.

Ben Tesseur: So, we are working on Panique au Village [English title: A Town Called Panic by Panique! Production]. It’s a very hyperactive and funny style of animation. So actually, after this film we’ll do another series, which is a more mainstream animation. And for the Fluffy Four we’re going for a mix between both styles. Because we think it’s funny. And it’s also a quite fast way to animate.

Hideki Nagaishi: I see. Then who is the key person of the visual design?

Ben Tesseur: For the moment, we are still in the very early stage of development. So far, we came up with the concept, with the characters and the designs. But if we find some good partners to help us finance the development, we will meet more people to help us out for the design, script writing, etc. 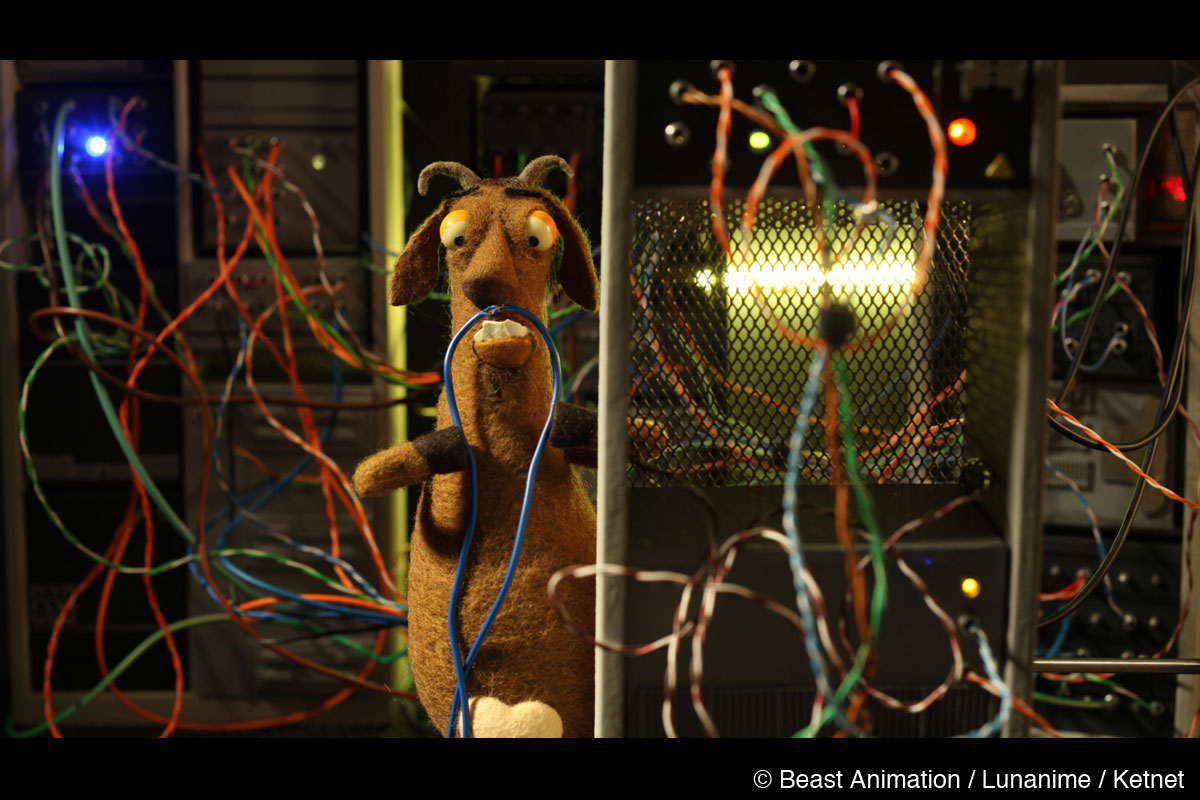 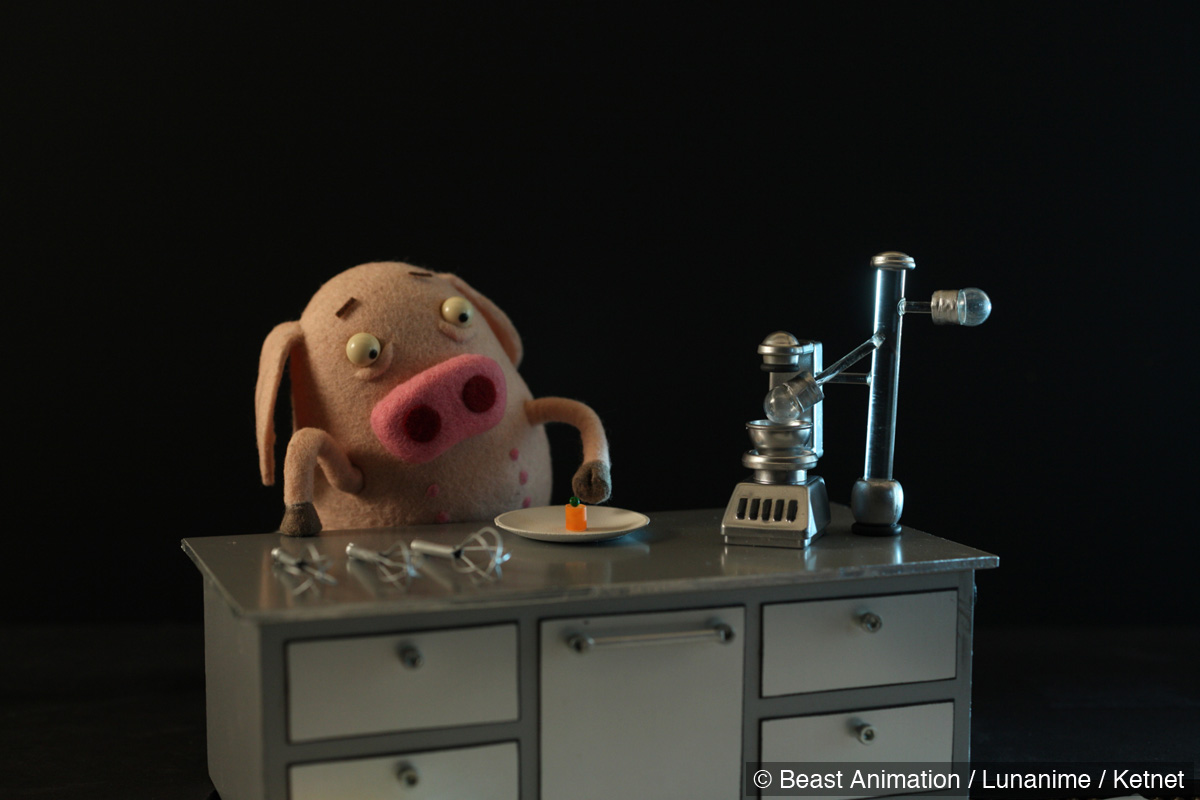 Ben Tesseur: I think our main goal is to entertain, to make them laugh, to make a funny humorous series. To have fun ourselves making it, and to correspond this to our young target audience. And in the best case, to trigger some of them to go and watch the stars, or look up on the Internet about the Voyagers, for example. Two of my children have exactly the age of our target audience, so I can really relate to their way of looking and experiencing our planet and the idea of the bigger universe we all live in. Since we started working on this, they are really interested in space and all the stuff that is going on.