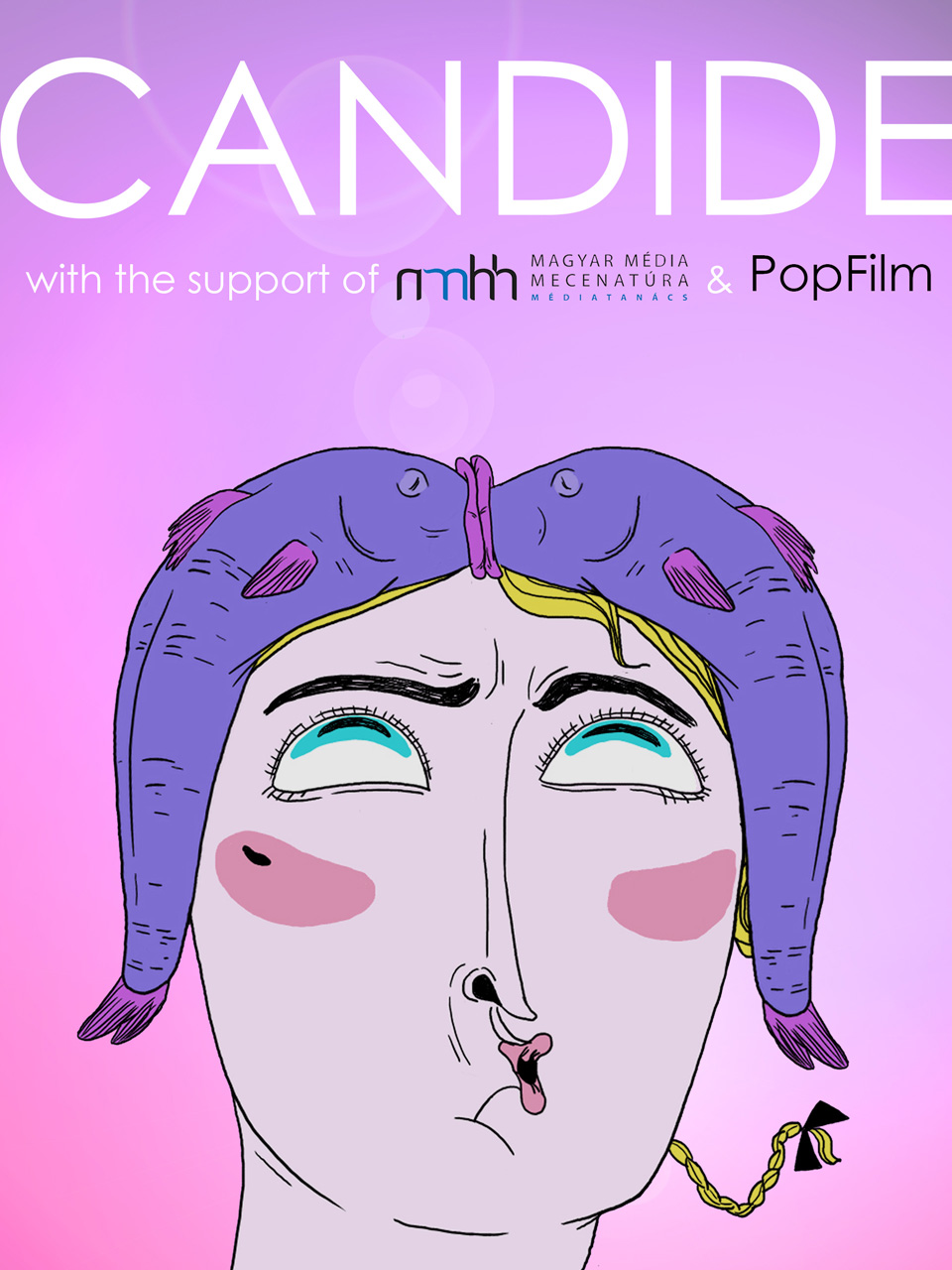 Candide is a series of absurd short stories, with the main characters appearing in ever-changing roles. Each episode is built around an up-to-date contemporary political/social/environmental issue with a satirical tone, just as Voltaire reflected on in his own times. The young Candide travels the world with an unshakeable optimism acquired from his arrogant master, Pangloss. Candide is desperately in love for the gender-aware femme fatale, Cunegonde, whom he chases throughout the story. The stories aim for a good balance of adventures and philosophical discussions. Zsuzsa Kreif’s graphic style – awarded and nominated worldwide – delivers witty, humorous, and unexpected visual solutions. 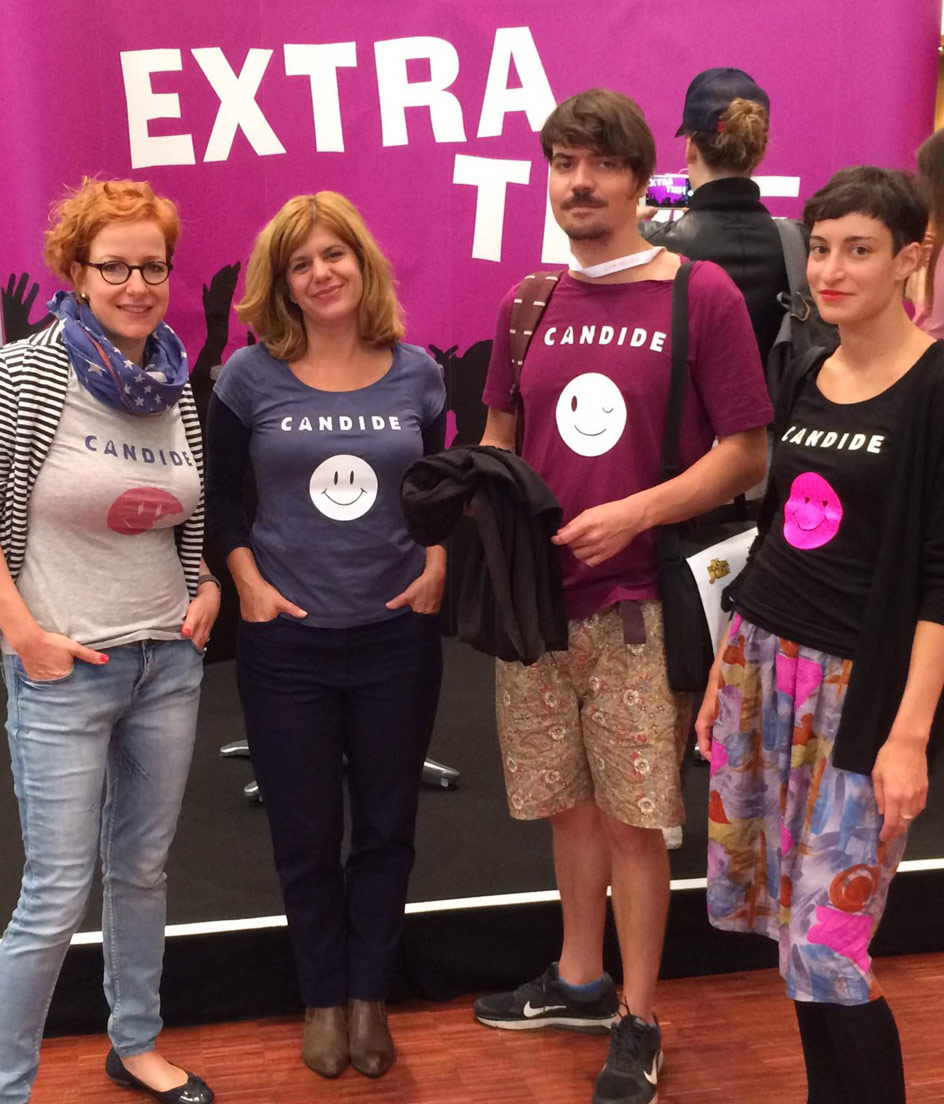 Candide is an adaptation of a French satire of the same name, written by Voltaire, first published in 1759. It is one of the most widely known, yet controversial publications due to its nature of political and intellectual hostility hidden in the story.

Now, Candide is reborn as an animation series by young talented artists, led by Réka Temple and Brigitta Iványi-Bitter, the producers, and Zsuzsa Kreif, the director. They moved from the original 18th century setting to modern times, and looked at the issues that surrounds us. The story contains critical thinking and a strong message that would relate to us all, and it will be delivered with a good sense of humor.

Candide is the main character who is an optimistic, young and innocent guy, and takes on a journey around the planet. In this 21st century version of Candide, Candide will travel to Silicon Valley, The Amazon jungle, Europe, The Middle East, North Korea, and even to space in order to face current issues. What the audience will find is the same characters in different situations. The familiar faces from the original story can be found as well, such as Pangloss, who preaches about the best possible world we live in, and Cunegonde, who is a feminine feminist, playing a more important role than in the original story.

The animation in development seems to be in a music video style, which is theatrical and pop, according to the presentation by the creative team at Cartoon Forum. The music, which accompanies the animation, is developed by the French composer Benjamin Efrati. His music enhances the contemporary feel of the story with his experimental digital music. Iványi-Bitter says that they believe that this style would give young adults, especially teenagers, motivations to continue watching.

Iványi-Bitter tells us that the project started with the intention to find a book that is widely known throughout the world. Candide is chosen as it has universal appeal and subject matter, and acknowledged well that people in the world would understand what Candide means. They also wanted to define the cultural heritage to work with.

The development of this project lasted for four years. Both the pilot and the first episode were selected for the Annecy Festival 2015, 2016. The style comes from the director Kreif. Iványi-Bitter says, “She is an extremely talented director and designer. Also, there are a group of friends who are developing as part of the crew. They’ve been discussing a lot about the tempo and speed of the film. In the beginning, it was very speedy. We tried to slow down a little bit and give more time to the viewer to understand what’s going on. On the other hand, this is like a music video for teenagers. We want them to have constant stimuli to watch. We have found this fragile balance between a music video style and an understandable story line.”

A good sense of humor is one of the characteristics of this animation series. Iványi-Bitter explains, “First of all, we wanted to have contemporary issues. We first examined what the important issues around us and the socio-economical problems in the contemporary world. Then, we started to develop around these issues with certain funny characters and situations. We are working with a group of scriptwriters. There are a different kind of input coming into the story. Therefore, it becomes very diverse.”

Message to the Audience

Iványi-Bitter tells, “This is not only for adults, but also for teenagers and young adults. We want to convey the message that we have to be very alert about our surroundings. We’ve got to be critical as well as preserve the sense of humor. We must also be positive and critical at the same time to watch out what is really going on around us.”

Candide is going to be ready for broadcasting in French and English by the end of 2017.