Summer by the sea on Quebec’s Atlantic coast. Joseph moves into a friend’s house. He convinces Emma, his ex-wife, to join him there. While the 1995 referendum campaign on Quebec’s independence is thriving, houses are burning, speeches are clashing as lovers find each other and fall in love again. Will they part once more?

In this film of poetry and compelling images, the intimate and the collective destinies resonate in the coastal village of VILLE NEUVE. Joseph will fall and later rise, for a fragile redemption in a Quebec, perhaps, at the dawn of its independence. 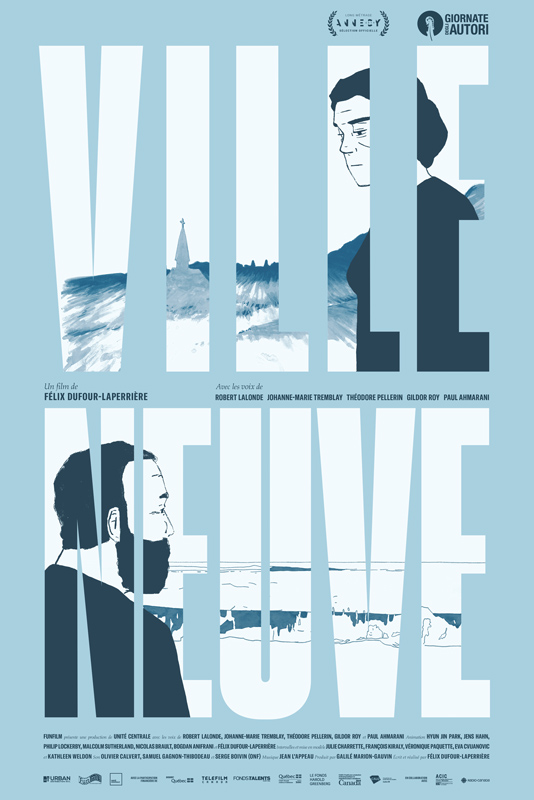 The Annecy International Animated Film Festival 2019 selected Ville Neuve, a hand drawn monochrome film, as one of the feature films in “Competition Contrechamp”. The film invites the audience to its calm and quiet universe where the audience can contemplate the internal struggles of Joseph through his relationship with his ex-wife and his son in Quebec, Canada, where they are caught up in the whirlwinds of a politically-divided country due to a referendum campaign on the independence of Quebec from Canada.

Animationweek heard the story behind the film from Félix Dufour-Laperrière, a Canadian film creator who brought the film to life with his comprehensive skill and creativity of filmmaking as the director, scriptwriter, storyboard artist and animator.

Hideki Nagaishi (HN): Where did the initial idea for this film come from?

Félix Dufour-Laperrière: I would say it comes from two things. Firstly, it comes from a short story from the American novelist Raymond Carver. The story is very short, about 4 pages and a half. I took the general setup, and the main forces that inhibits the two main characters come from the short story. It was set in the US, so I moved it back into Quebec, the French part of Canada. For me, the short story was the balance between a certain temptation of nihilism, and a posture of resistance and hope. Which are good illustrations, in my eyes, of the tension within the National aspirations of Quebec. I was touched by that. The story is simple, delicate and beautiful.

Secondly, after a couple of shorts in animation, I wanted to try playing with a longer form, whilst keeping a part of the cinematographic language that you can use in short forms, a freedom within the making itself. That’s why Ville Neuve was made on a very low budget, yet it was very free so we had total editorial liberty, and it was fun. Rather badly paid, but fun, and with a very hardworking team. A lot of the animators are actual directors in their own practice.

HN: What kind of experience or message do you want to deliver with this film to the audience?

Félix Dufour-Laperrière: Ville Neuve doesn’t try to build up a regime of exactness. It’s not necessarily about truth but about putting different forces in presence. I would say there’s two main settings. One is linked with the profound hope that not everything is set, not everything is written yet. Everywhere, there’s still a possibility for change, a possibility to write down something new. The other: I wanted to put in resonance the intimate, subjective desires and aspirations, and the collective ones. I think going back-and-forth they tell a lot about each other. So that’s maybe the main goal. I think some of the intimate and individual liberties are linked with collective ones, and vice-versa. 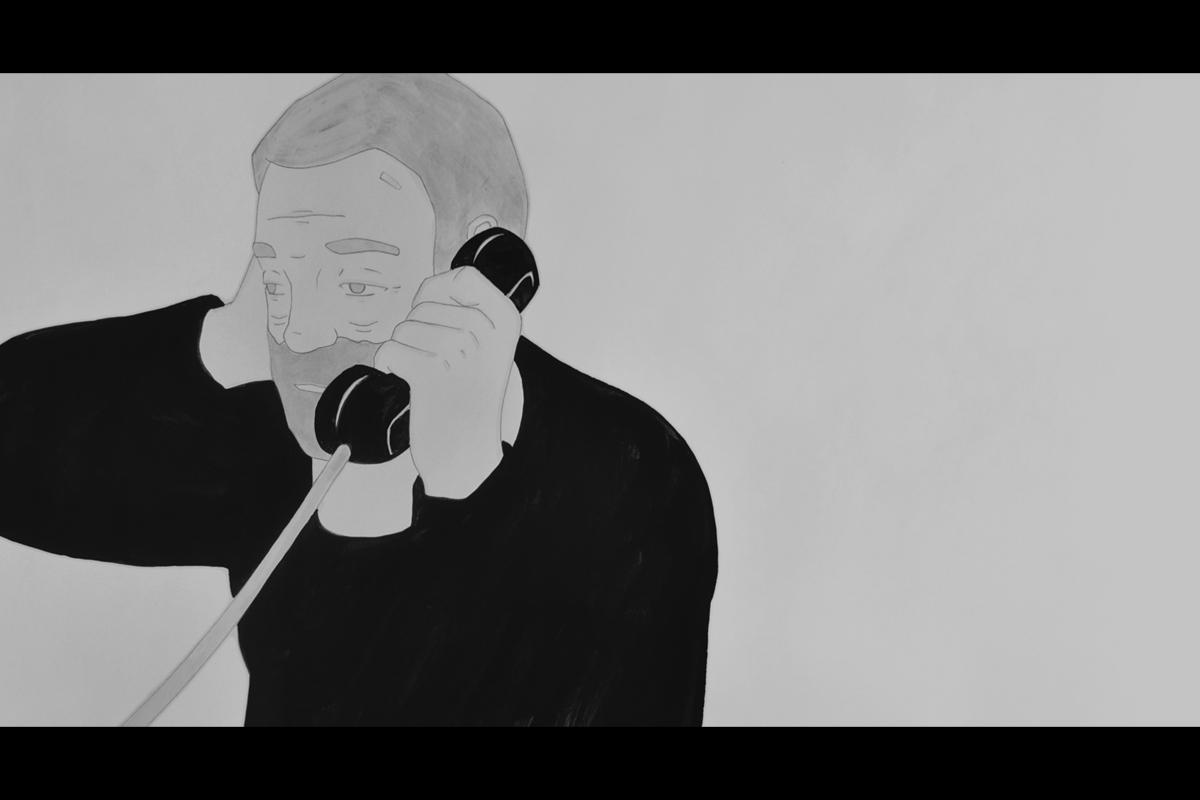 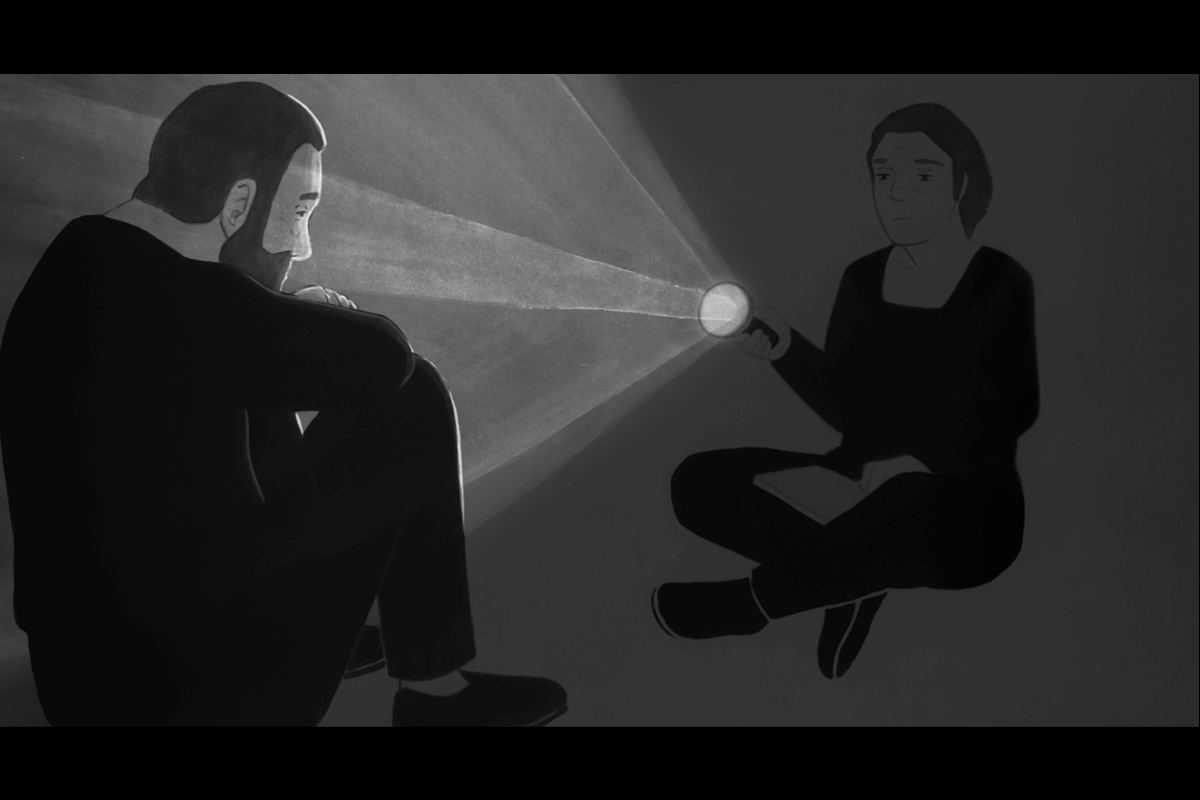 HN: Why did you choose a black and white animation format to tell the story?

Félix Dufour-Laperrière: It’s a paradox. We were working on a small budget, yet work on paper is rather expensive. But on the other hand, we could achieve pretty quickly a peculiar graphic look, a visual specificity for the film. So we’ve chosen to have an heavier process of making the animation, but the inking on paper is something that gave a graphic signature more frankly than having another device for producing the images. Also, if the black and white can be a relation to the past, to the archives, it’s mainly used because of the shades of gray that are mixed a lot in the films. It was more elegant to keep it in black and white, so the grays blend in a more satisfying way.

HN: Could you please let us know the process of designing and making the visuals of the universe of the film?

Félix Dufour-Laperrière: Basically, I didn’t want to make model sheets because I didn’t want to geometrically simplify and structure the drawings too much. I wanted to keep a certain liberty in the gestures and the recording of these drawing gestures. Basically, I took a year and a half to make the keyframes for the entire film, so between 1 and 10 drawings for each shot.

We started the production with a small team, and the entire film was already layout plus a bit of the main poses for each action, so it gave us a sense of cohesion for the characters. Each character was animated by only one person. I’m not a very good technician in animation and some people in my team are better animators than I am, technically stronger and more precise. For example, Hyun Jin Park is a very solid young animator, and I would give her my drawings of Emma, the ex-wife of the main character, and she would correct them. After a year, she was very good at drawing Emma.

Otherwise, some parts of the film were very planned, written, scripted and everything. In other parts we have some loose drawings, and then we assemble it afterwards. I know where every image came from, but they’re not all meant to be interpreted, especially the sequence where the woman is reading a passage of a book on the shore, and it’s black and there’s a lot of images. It’s not a regime of exactness, it’s not meant to be strictly interpreted. The images and the sentiments and ideas that are put in presence of each other.

HN: How were the characters and the story developed?

Félix Dufour-Laperrière: It was my first feature script, so I built it in an unusual way. Basically, I wrote the general setup. I wrote the monologues of each characters, in French we say recitatif, which is a poetic form. It is prose, but in a poetic context. Once I’ve written down the general context and the main monologues for each character, I’ve built the story around that. So it was pretty intuitive. And that gives a film that is not structured like a traditional three acts situation.

I thought of the structure of the script as being one of resonance, so things are in a wave. Sometimes, as in music, we need to keep the volume low, so the resonances are audible. It’s the same thing in the film, sometimes it’s a bit low-key. So, there is visual space and visual time to interpret and feel these resonances. That’s what I tried.

HN: It is a simple animation, in a good way, and it’s a quiet animation with kind music. It allow me to contemplate whilst watching your film. Is this what you aimed for?

Félix Dufour-Laperrière: That’s exactly what I wanted. Personally, as a viewer, I like to have space in a film. I like to have some space for myself, to digest the images, the storylines, and the ideas that are situated within the film. That’s a personal taste that I try to share.

I also like that the meaning, the interpretation, isn’t strict. I put in presence images and sound, and it’s not a matter of truth or exactness, it’s a matter of using the cinematic tools to explore some fields. I love films that are not necessarily totally open, but that assume the complexity of the world and cinema that isn’t that exact, closed and strictly rational.

HN: I thought that Joseph is admitting his weakness and recognizes the French language and French culture as his identity. He can’t change himself to improve his situation and wants to rely on Emma’s kindness. On the other hand, I felt the flexibility and strength in Emma for her to change. 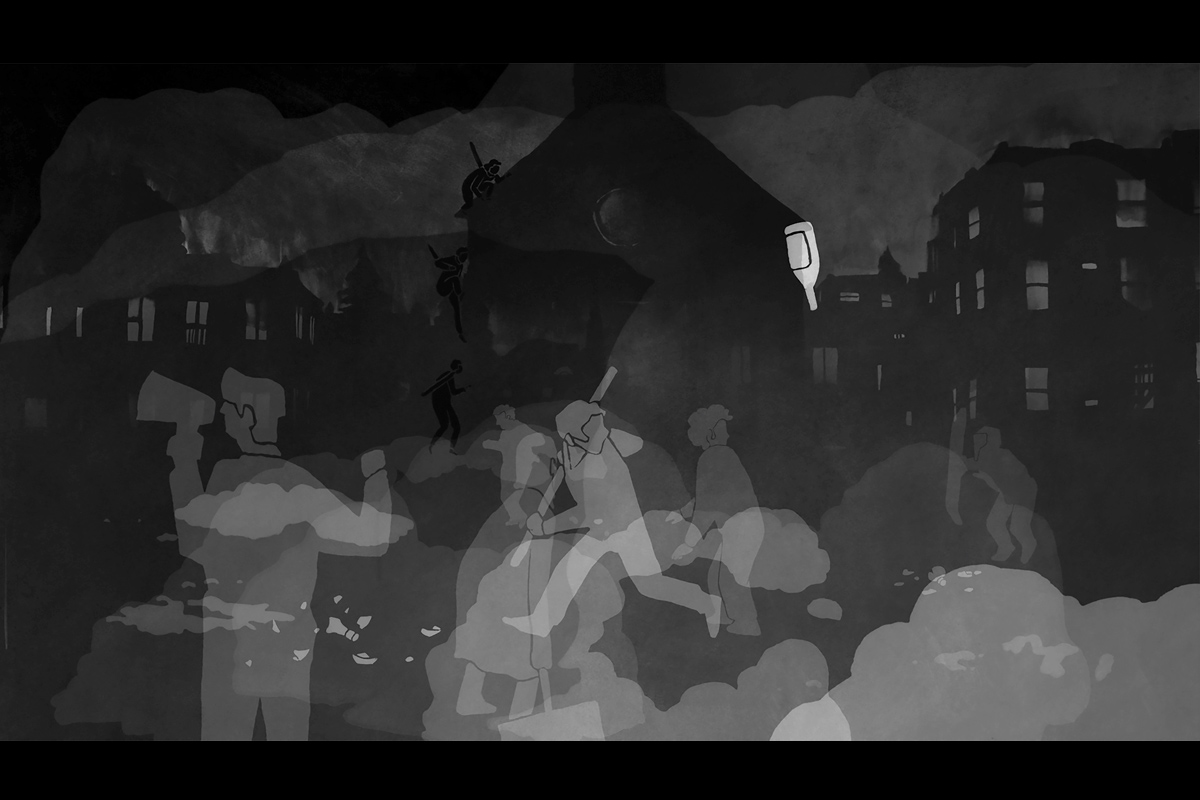 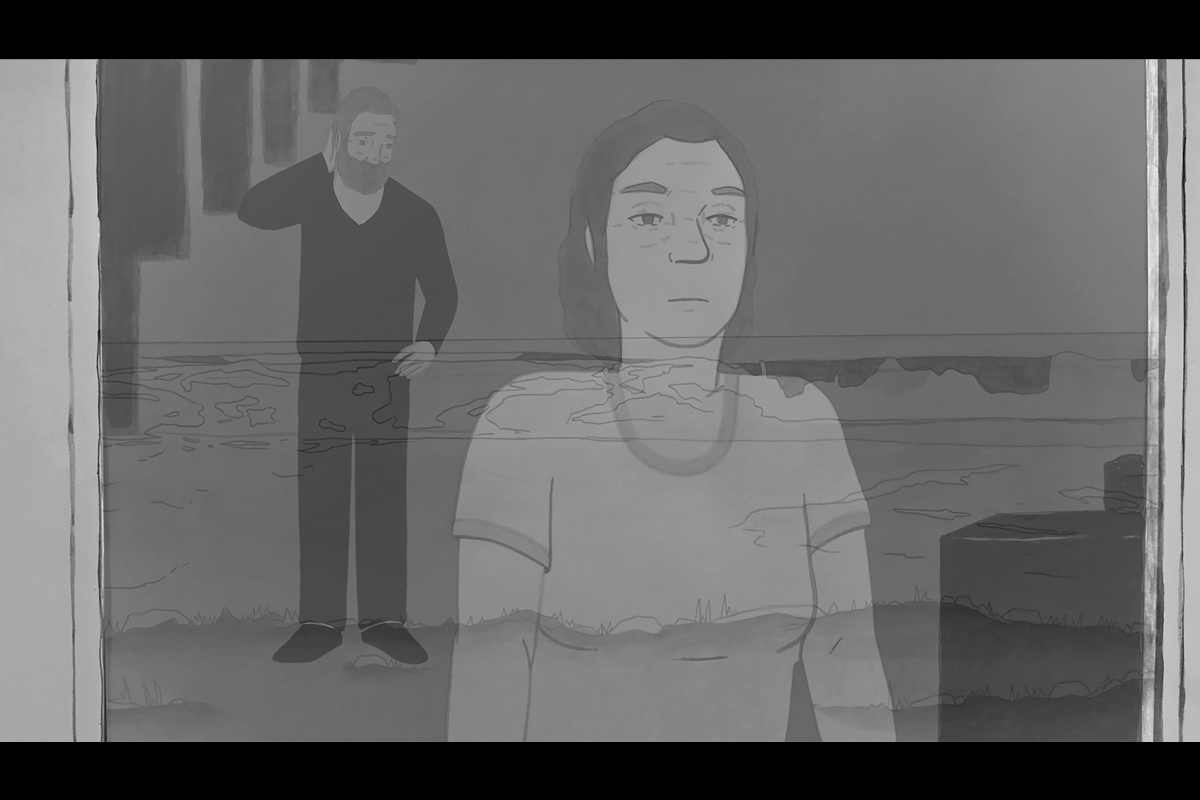 Félix Dufour-Laperrière: I think the two characters are completing one another. You’re right, Emma is the wiser of the two, yet she’s still hopeful and she’s looking forward, which is good. Joseph has a lot of problems. He’s looking more backward, it’s a sterile position to always look back. But for me, it’s a bit more complex because Joseph is also capable of producing anger, that is necessary to adjust for the future and to have a grasp on it. Emma is quiet, yet she doesn’t allow herself to be in anger, to use that anger about the state of the world, the state of Quebec. I think they complete each other, but Emma, in my eyes, is the wisest and certainly the positive part of that duality, yet Joseph is also lucid, in my eyes.

I share both of their positions. There’s a lucidity in Joseph, because things are going bad. But we cannot look back, we just have to look forward and try to grasp what’s coming in.

HN: The last scene is what you gave Joseph to find hope in his future, right?

Félix Dufour-Laperrière: It’s a bit of an open ending, but it’s a possibility to share a common hope, to share a common goal, to have common ideals. That’s why the referendum is won in the film, I wanted to finish in a positive note, because I didn’t want to also keep repeating the defeats.

The matter is, I’m an independentist, totally. But if Quebec is staying in Canada, I think we need to give meaning to that decision and to grasp our future. It’s not only a matter of constitution and independance, which I think would be a good thing. But it’s a matter of not taking everything for granted, and to grasp our political future. And it’s also a posture of resistance against the great capitalism that is blowing everything away. I do share the anger of Joseph. A certain pessimistic position about it, too. But I have kids, so I’m just looking brightly forward.