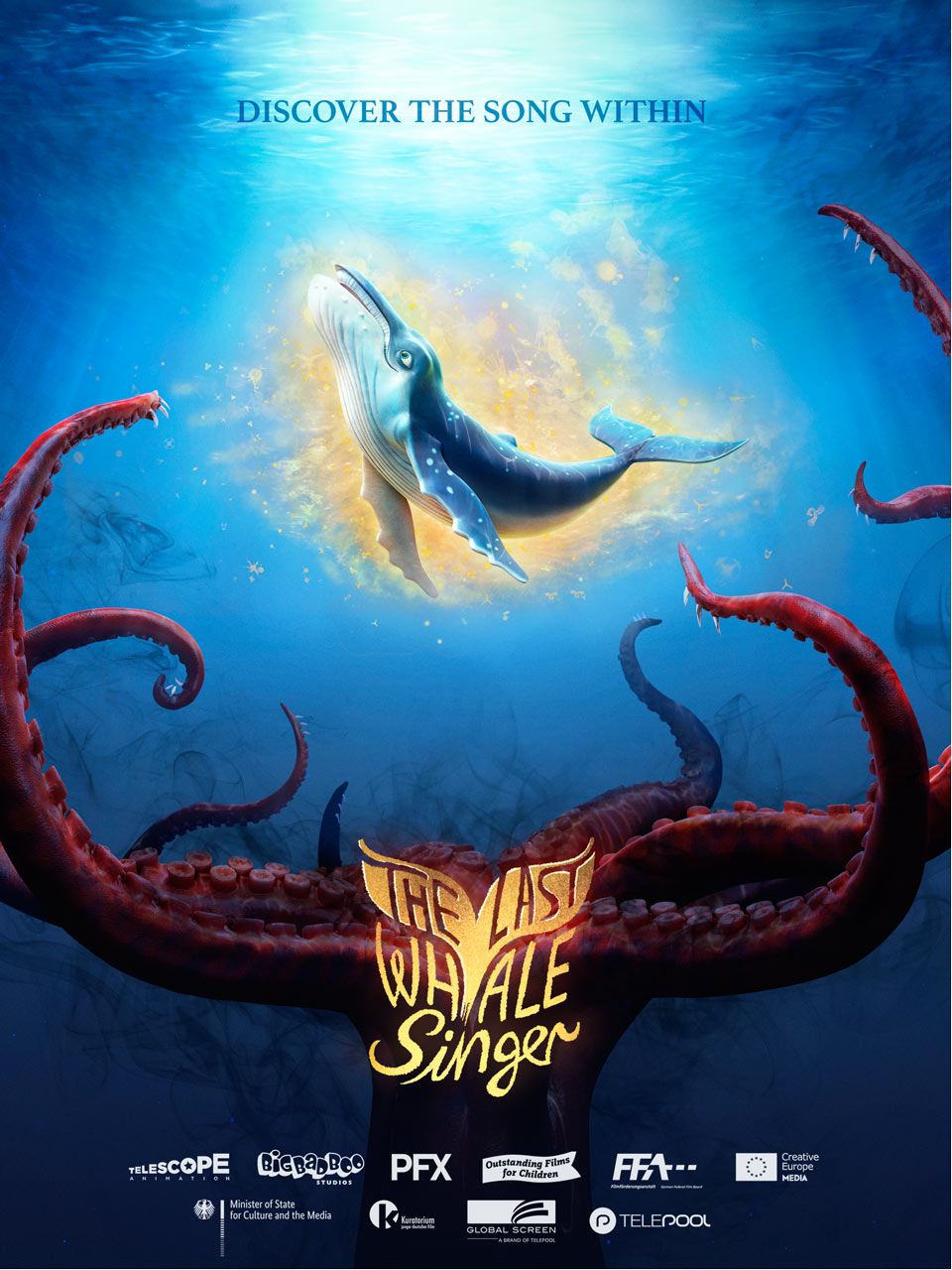 Humpback whale Vincent is the teenage son of the last Whale Singer whose mystical song was essential for the oceans’ survival. When the evil Leviathan breaks free from a thinning iceberg and threatens to destroy all life, Vincent is the only one who can stop it. But doubting his ability, he undertakes a dangerous journey to the deepest sea to resurrect his father. Aided by his friends, the loyal cleaner fish Percy, and Darya, a rambunctious orca girl, Vincent must learn to trust his inner voice to become a Whale Singer himself and save the oceans from destruction. 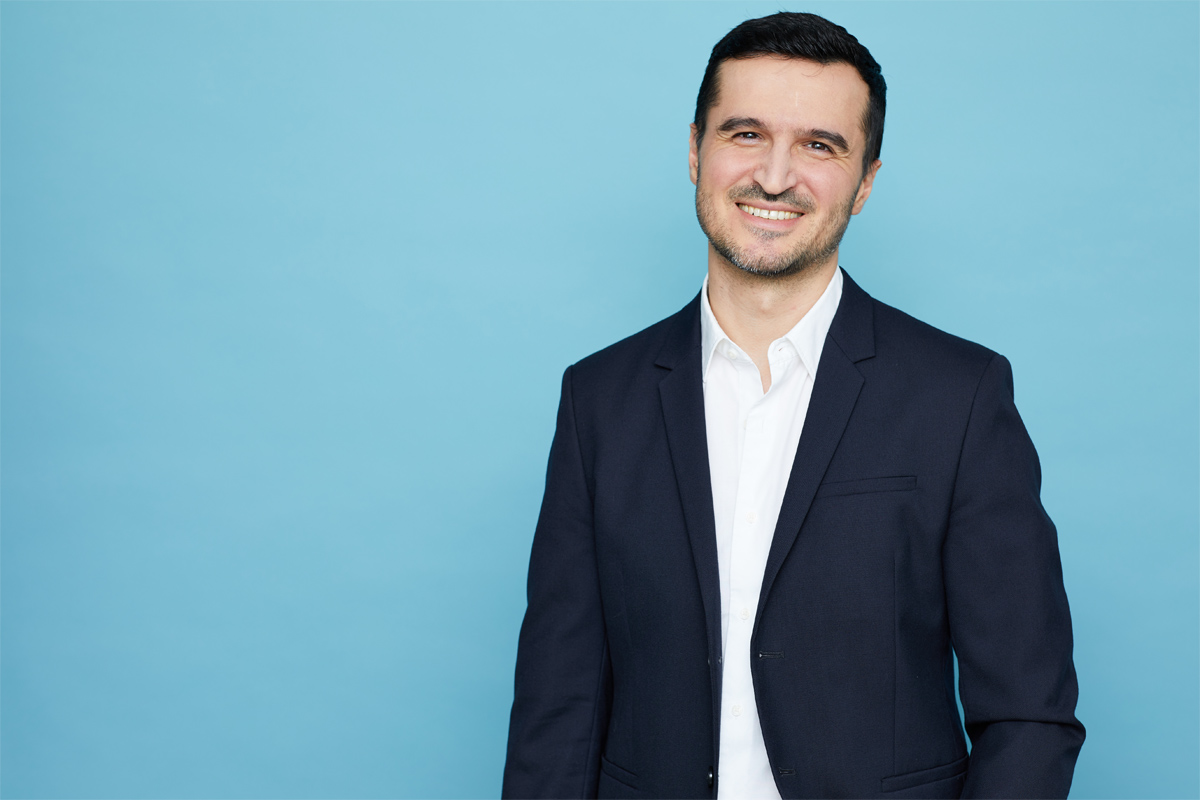 The Last Whale Singer, a new film project, marks the return of the author and co-director of A Stork’s Journey*(2017), Reza Memari. The film will be the debut title for his new production company Telescope Animation.

This time, the film invites you to the magical and magnificent world of the sea.

The Last Whale Singer, an original animated feature due for release in 2024, is the story of a young humpback whale’s epic adventure and is currently being created with Unreal Engine, an advanced, real-time 3D creation tool developed by Epic Games and it is one of the industry-standard game engines in the global games industry. Telescope Animation plans to expand the universe of The Last Whale Singer to a series, a video game and an XR experience, and is progressing those projects simultaneously by reaping the benefits of utilizing a cutting-edge digital visual creation platform.

Reza graciously shares the stories behind the anticipated projects with us.

*: You can read our interview with Memari on A Stork’s Journey here.

Hideki Nagaishi (HN): How did the project start, and where did the initial idea of the story come from?

Reza Memari: About 10 years ago, I was watching a documentary on humpback whales and their special song. As soon as I learned about this amazing ability, I knew that this should be a movie. From the very beginning, the story was about a rebellious humpback teenager who needed to find inner peace in order to discover his own magical song. This core idea is still very much intact, but it has evolved into an epic, moving story about confronting life and death against an unstoppable deep-sea monster.

HN: How did you develop the story from scratch?

Reza Memari: First, I read as much as I could about oceans and whales. I think that rigorous research is important before any project, especially when it involves animals. When I approach a script, I tend to write several treatment drafts until I can really figure out the main characters and what the premise and plot are. That’s when I write the first script draft, which usually doesn’t take me that long because most of the tough questions have already been answered in the treatment stage. From there, it’s about rewriting and refining, tuning the voices and humor, the emotional scenes vs. the funny scenes, etc.

HN: What kind of message or experience do you want to deliver to the audience through this film?

Reza Memari: The Last Whale Singer is about finding your own song, discovering your vocation and believing in yourself. But, it’s also about working together to save our world. More than ever we need to speak up, listen to each other and collaborate, if we, as a species, want to survive and… evolve. 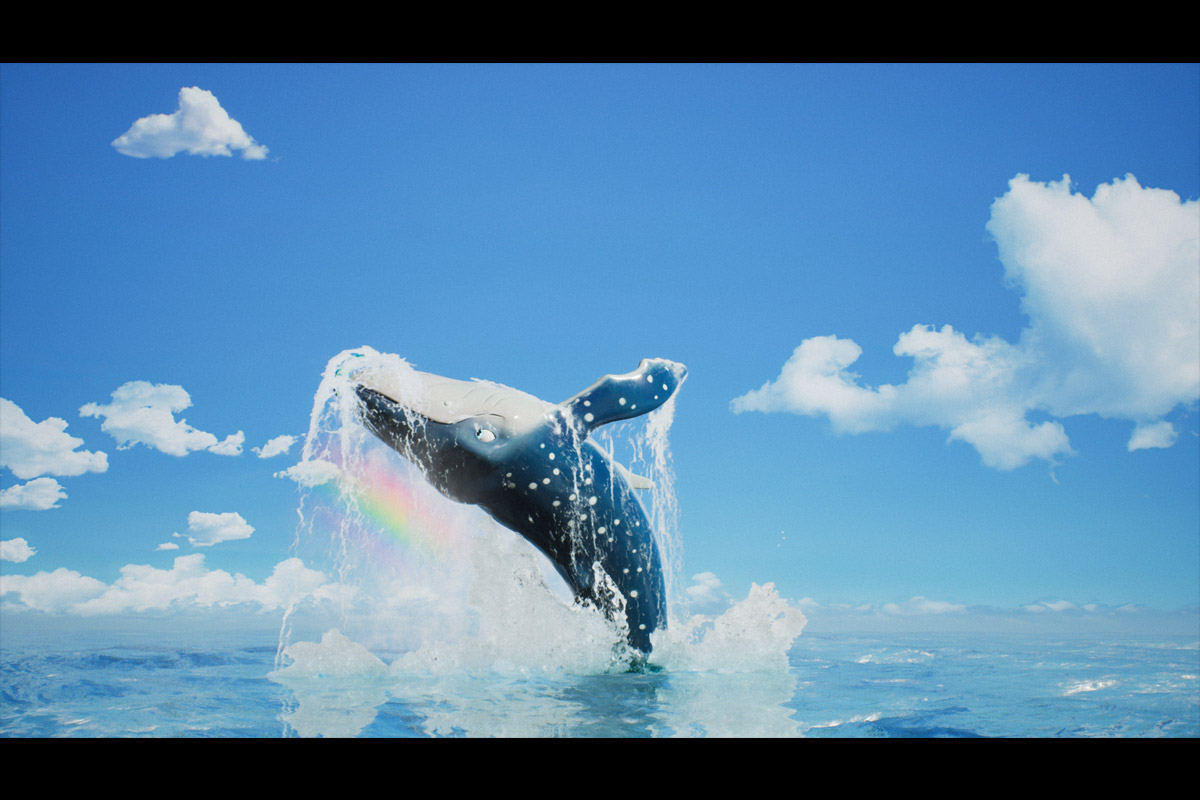 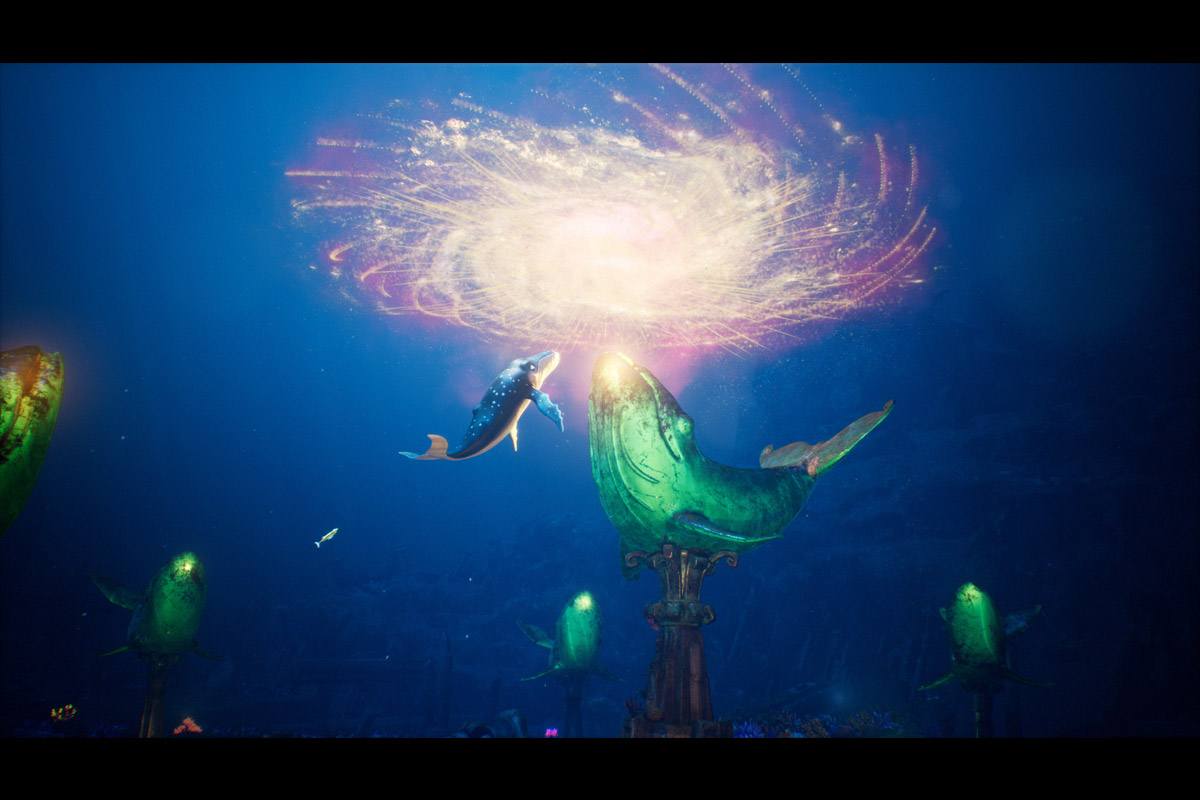 Reza Memari: From the start, I wanted to capture nature’s true beauty and magnificence, and the magic of these gentle giants of the sea. This meant that the character designs needed to be faithful to reality, while stylized enough to be expressive and emoting. The same goes for the underwater world: I wanted to let nature be nature in all its beauty and perfection. Our character designer, Uwe Heidschötter, and our concept artist, Tobi Trebeljahr, really worked hard to achieve stunning results for the teaser, and I can’t wait to show people what we’re going to do for the feature film.

Reza Memari: The film is all about whale songs, so the acoustic world plays a big role. Our hero won’t break into song like in a musical, but he will perform moving melodies that are so beautiful that even the water will start to glow. I am so lucky to work with Icelandic composer Daníel Bjarnason, who conjured up a gorgeous score for the teaser. Our excellent Canadian sound designer, Tyler Fitzmaurice, collaborated with Daniel to create these epic acoustic landscapes, and mixed real whale songs with a human singing voice and electric guitars. 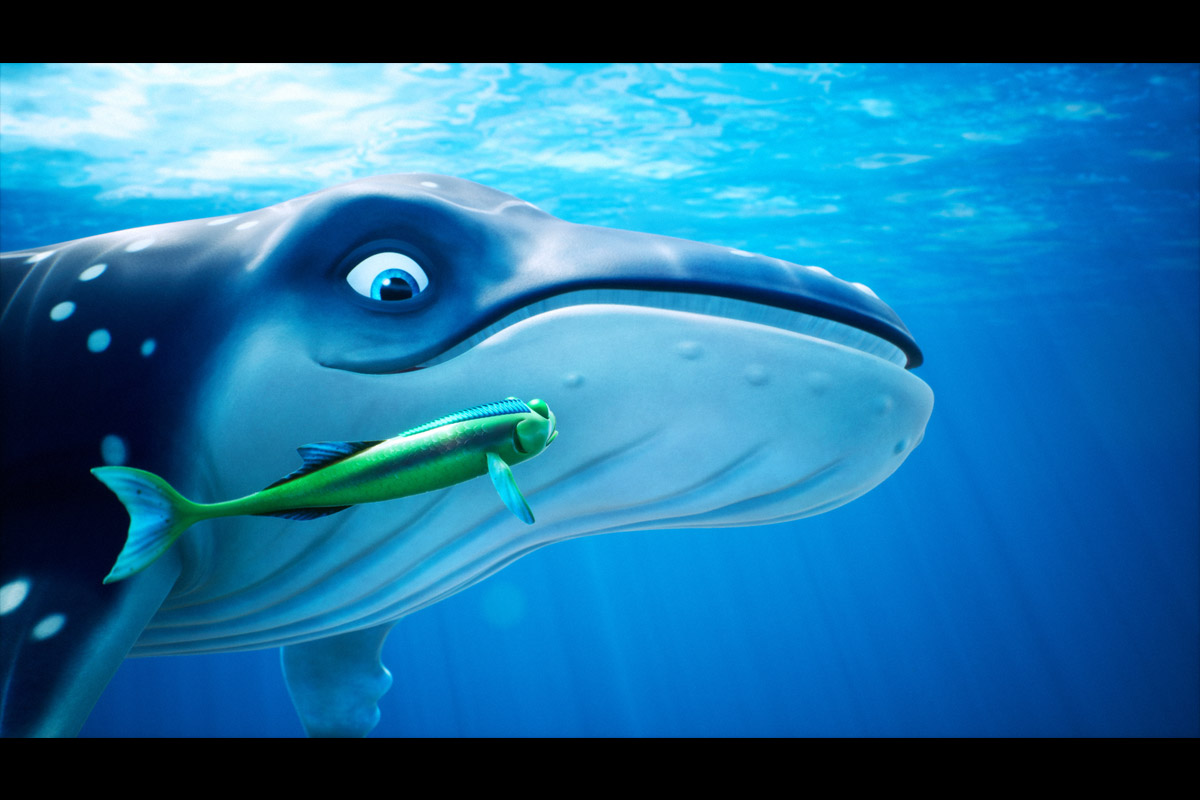 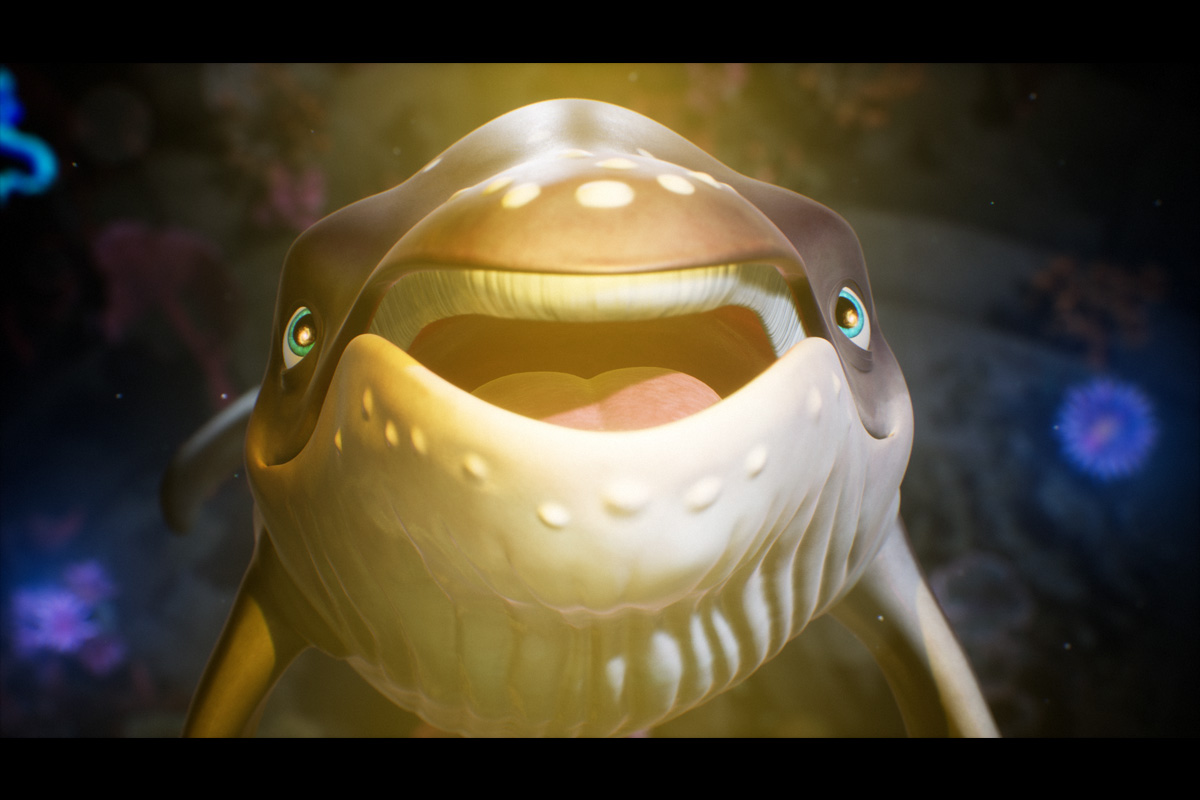 HN: What element of the film did you feel was difficult to develop so far and how did you deal with that?

Reza Memari: Nailing the design of our teenage hero Vincent was the hardest part. Real humpback whales are gorgeous and fascinating, but they are not the easiest characters to animate in terms of where the eyes are in relation to where the mouth is. Our character designer, Uwe Heidschötter, did a fantastic job, not only fleshing out the softness and insecurity in Vincent’s nature, but also making him appealing and lovable, even huggable. We’ll see what other challenges await us once we begin with the feature film production!

HN: Telescope Animation is managing an animation series and a video game in the same universe of the film and you are developing them with Unreal Engine. Could you please tell us how did these two projects start and why did you decide to use Unreal Engine to develop all of the projects in The Last Whale Singer?

Reza Memari: At Telescope Animation, we treat each IP as its own transmedia universe, in which the individual projects are the stars of that universe. The Last Whale Singer provides such a rich mythology and world, that it allows us to tell more than just one story. Therefore, we will release a video game before the film’s release that functions like a prequel to the film. Furthermore, we have begun the development of a series that will continue the storyline after the movie. Unreal Engine really enables us to use this innovative transmedia approach. Instead of creating assets and designs and using them just once, we are able to generate an asset pool that each of our projects can benefit from. Therefore, we save tremendous amounts of resources – even though the work flow and pipeline for such a complex undertaking is completely different than making “just one” film.