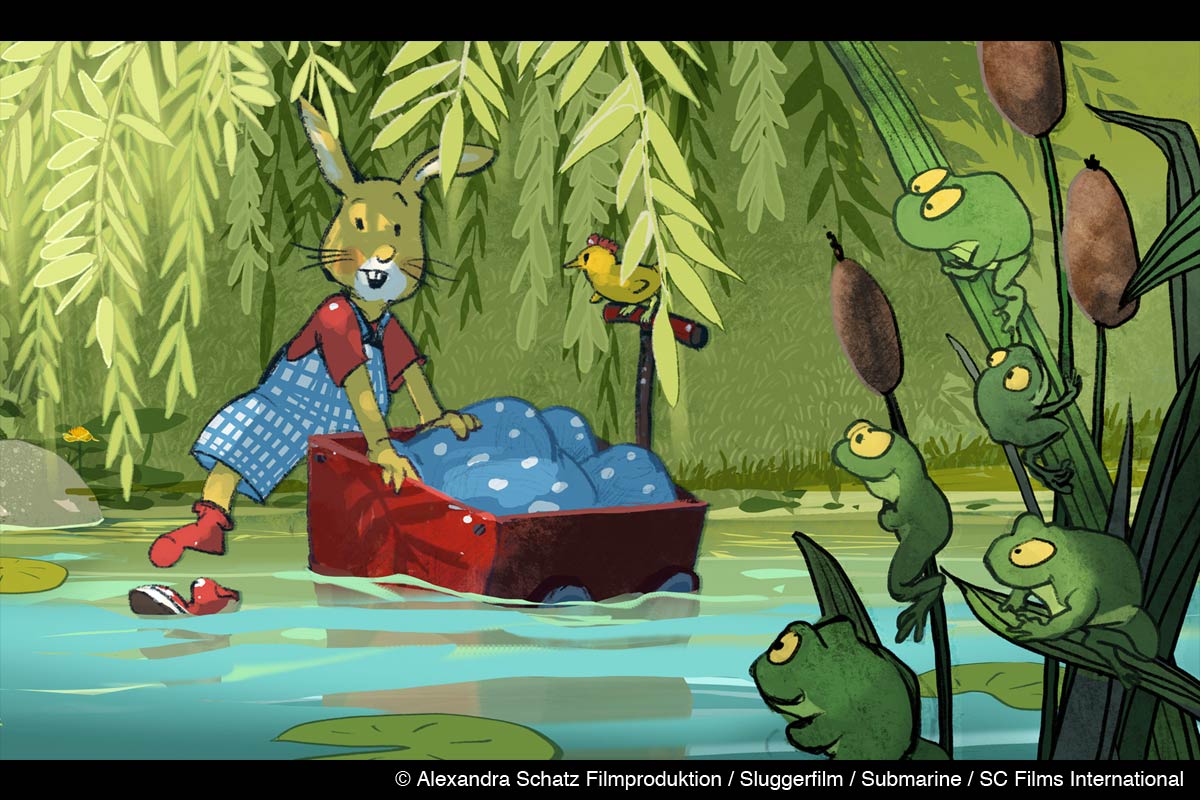 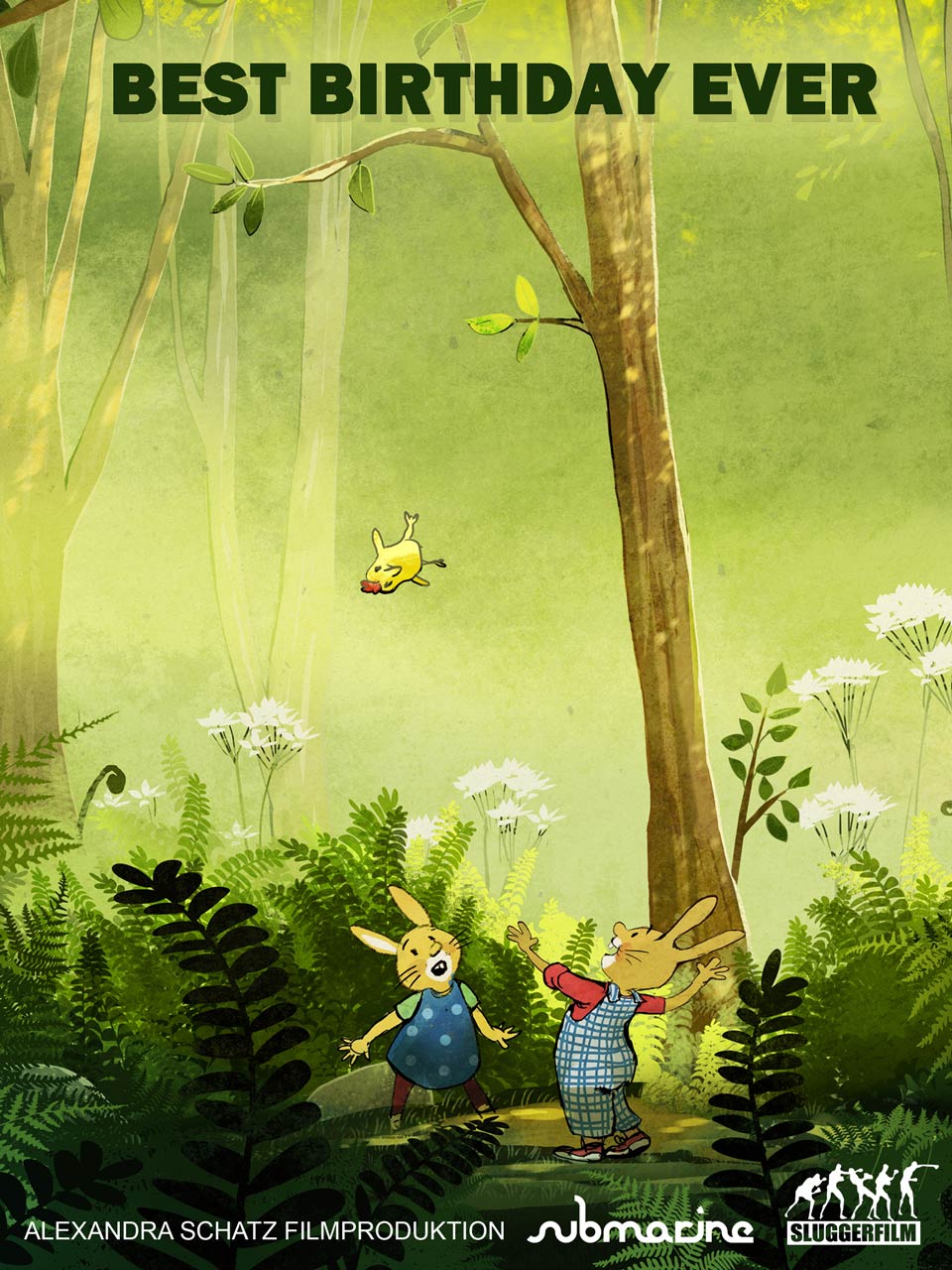 Karlchen (Little Charlie) is a four-year-old rabbit boy who lives together with his family. He was used to have his parents’ full attention until Klara was born. He tries to ignore her as best he can. After all, it’s his birthday tomorrow. He’s been promised a birthday picnic by the lake and has been looking forward to it for days. On his birthday morning, Klara falls ill and the parents have to take her to the doctor. The picnic is postponed and Karlchen is disappointed. He decides to move to Grandma Nickel’s house at the other end of the town. He would like to celebrate his birthday with Grandma. Unfortunately, he takes the wrong way. The adventure starts…

Best Birthday Ever is a charming animation film project with an appealing visual design that we came across at Cartoon Movie 2020. It is a film based on a famous German children’s book series Karlchen, written and illustrated by Rotraut Susanne Berner.

A coming-of-age story of a small rabbit “Little Charlie” who ends up having an accidental adventure in a forest, told with a comforting traditional style 2D animation.

Here are the stories behind the film project that we’ve heard from the producer Alexandra Schatz and the director Michael Ekblad.

Alexandra Schatz: We love to produce a 2D animation feature film for the youngest audience as their first visit to the cinemas.

We are also proud to have the chance to produce a film based on the characters and world from the well-known series of the Karlchen picture books by Rotraut Susanne Berner, and we hope to achieve as much international awareness for our film as the books already have. Over a million copies are sold around the world in fifteen countries.

After such a long and successful track record in publishing, we think it is the perfect time to bring Charlie to the big screen and have young children around the world enjoy the books and the feature film.

HN: How did the project start? And how did the current international co-production partners team up?

Alexandra Schatz: I have appreciated the sensibilities of storytelling for the youngest audience combined with the unique style of illustration by author and illustrator R.S. Berner for many years. Among some hundreds of her wonderful books, I was always very much attracted by the Karlchen books and decided to develop and produce a feature film based on these books.

My good experience in the many co-productions with the Swedish director Michael Ekblad (namely TV series, short films and the animation feature of the Molly Monster franchise) over the last fifteen years encouraged me to ask Michael to join the co-production team with his company Sluggerfilm based in Malmö, Sweden.

Janneke van de Kerkhof from a Dutch company Submarine was right away interested in joining the co-production team when I first pitched the project at Animation Production Day in Stuttgart.

So, we soon agreed to co-produce and have the production done at my studio in Hannover, Germany (development and post-production), Sluggerfilm’s studio in Malmö (pre-production and directing) and Submarine’s studio in Amsterdam, Netherlands (animation and layout).

HN: What kind of message or experience do you want to deliver to the audience through this film?

Michael Ekblad: It is a great adventure in itself to direct a good and exciting movie for younger children. It’s a story we try to tell from their own unique perspective. It is a story of disappointment, courage, acceptance, growing as an individual and understanding the needs of others.

HN: What aspect of the story from the original children’s book series attracted you the most?

Michael Ekblad: The book series is being narrated in a very charming and emotional way with the everyday life and little adventures of a four-year-old boy (drawn as a rabbit) living with his mum and dad, his baby sister Clara and the pets of the family, Chicken and Cookie. It is the world our audience of the same age can perfectly identify with, feels comfortable with, and will enjoy.

HN: How did you develop the story for the film with Aje Andrea Brücken?

Michael Ekblad: The treatment was written by the book author R.S. Berner and the producer Alexandra Schatz. The scriptwriter Aje Andrea Brücken developed the script based on the treatment in close cooperation with me as the director and the producers, as well as the co-production partner German broadcaster ZDF.

HN: Is the story based on the book series, or is it an original story for the film?

Michael Ekblad: The story is based on the characters and world of the book series, but the story for the film is an original idea.

Michael Ekblad: The world and the characters are drawn in an appealing and colorful way, which are adapting the designs of original books and developing it to a level which is also recognizable as the style of the books and at the same time attractive for the big screen. Especially when it comes to the design of the locations and backgrounds, we had to create a whole new world that does not exist in the books. We looked for a style that is truthful to the books and also brings a fresh and an appealing design for a preschool audience. And luckily, Rotraut loved it!

Michael Ekblad: We have asked the well known film composer Annette Focks to create the score in a way that the young audience feels is comfortable and does not get scared in the scene with a big thunderstorm and the scenes with the fox. The very young audience loves songs a lot and it will always help to bring a sense of relief and fun after an adventure, big or small. The songs will be composed by Udo Schöbel.