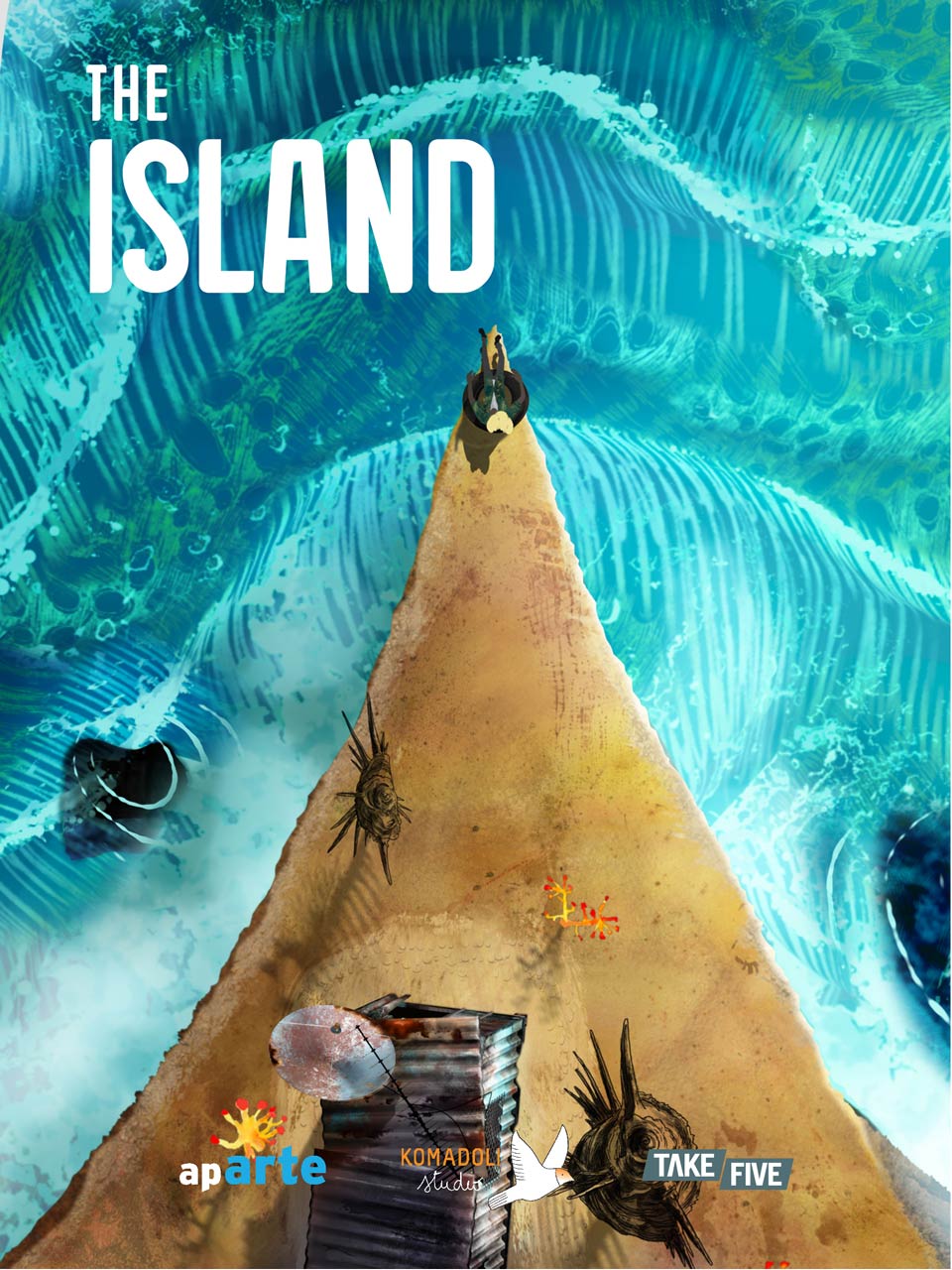 Robinson is a doctor and unlike Robinson Crusoe, his solitude is voluntary but his island in the Mediterranean Sea is invaded by migrants, NGOs, guards. Friday is a castaway, the only one from his boat to have survived when sailing from Africa to Italy. During his strolls on the island, Robinson confronts his own solitude by keeping a diary – that works like augmented reality – filled with extraordinary beings and events, which both fill and trouble his daily life. The island becomes a representation of our contemporary existence.

Anca Damian, the creator of the impressive and beautiful animated feature Marona’s Fantastic Tale, which has been circulating animation festivals throughout the world and getting many awards, pitched her new film project, The Island, at Cartoon Movie 2020.

The Island is a musical comedy film of a twist on the story of Robinson Crusoe, with a variety of unique visual elements as in Marona’s Fantastic Tale, which Anca achieved by using the unlimited potential of visual expression in animation. This film will deliver an opportunity to contemplate the two big global issues, ecological collapse and refugees, through a wonderful visual world.

Anca Damian: The Island is a very unique project. An animated musical that offers the audience through the setting laughter, poetry and adventure. A strong asset is in the reinterpretation of the story of Robinson Crusoe, updated to our times when we try to repair the colonist’s behavior but still we are limited by the rules and hypocrisy.

Everything happens while we live through the consequences of the ecological unbalance that we created on the planet, so in a way we contemplate the end of the world. It is a colorful, poetical and funny musical fable that can be seen as a mix of Little Prince, Robinson Crusoe and Monty Python.

HN: How did the project start? And where did the initial idea of the story come from?

Anca Damian: The project was inspired by the concert Ada Milea, Romanian singer, and Alexander Balanescu, Romanian violinist, did 10 years ago, that was based on the Gellu Naum’s play Insula (English: The Island), that was a reinterpretation of Daniel Defoe’s novel – Robinson Crusoe. This chain of reinterpretations would not have tempted me if I wouldn’t be interested in giving my vision on the present reality of ecological collapse and refugees issues.

The project offers a postmodern perspective on our contemporary world by combining elements from different arts: literature, theatre, music, visual arts, and even augmented reality.

HN: How did you develop the story from scratch?

Anca Damian: It was a very different process of work than I did previously up until now. I had the music before I had the script.

The songs were inspired by the surrealistic theater plays, and at the same time the story I wanted to tell was a different, another reinterpretation of the Robinson Crusoe story, in OUR reality so in the beginning, together with Augusto Zanovello, we went through the story trying to use the songs we had, in a different context. In fact, it was not possible to write the script as usual, as it is a musical. But in fact, it was a stage that should be burned because some ideas popped-up. We even went to Lampedusa (an Italian island where migrants arrive from Africa) to get inspired, and I also did profound research into the refugee’s issue, with the help of the journalist Cezar Dezfuli.

Only when I entered into the belly of the project, and I started to work on storyboard with Dan Panaitescu, I could work on the story, and after making a rough animatic I reunited the musicians to change the music and the text from their concert.

Additionally, this process was difficult as the musicians have played this concert since a decade ago now, and I had to convince them that the film is something else. It was also a moment when we added other 2 voices – so a quartet and 4 singers – when the reality of the new reinterpretation came to life.

Anca Damian: The visual design is following the concept of trying to reproduce a (sur)realistic environment, where the audience should feel immersed; the beauty of the colors is highly attractive but at the same time a kind of insinuating feeling of sickness. The colors of the sea (turquoise), of the clouds (pink) look like paradise but the chemical feeling is haunting.

In the concept, everything mankind does should have a realistic texture, because it never integrates in nature. I got a lot of inspiration from “Burning Man”, an annual event in the USA. As the space should be immersive, the sets are in 3D.

Anca Damian: I usually do the music with the composer before starting the animation. Here, I had the music before writing the script!

Of course, we recorded the new music with new songs and 4 voices, the Quartet – but still, we have to record the percussion and mix. What is also unique with this project is that I am working with a choreographer, Andrea Gavriliu, for the movements of the characters. It is a great joy and inspiration. As I said, in this project all the arts have found their place.