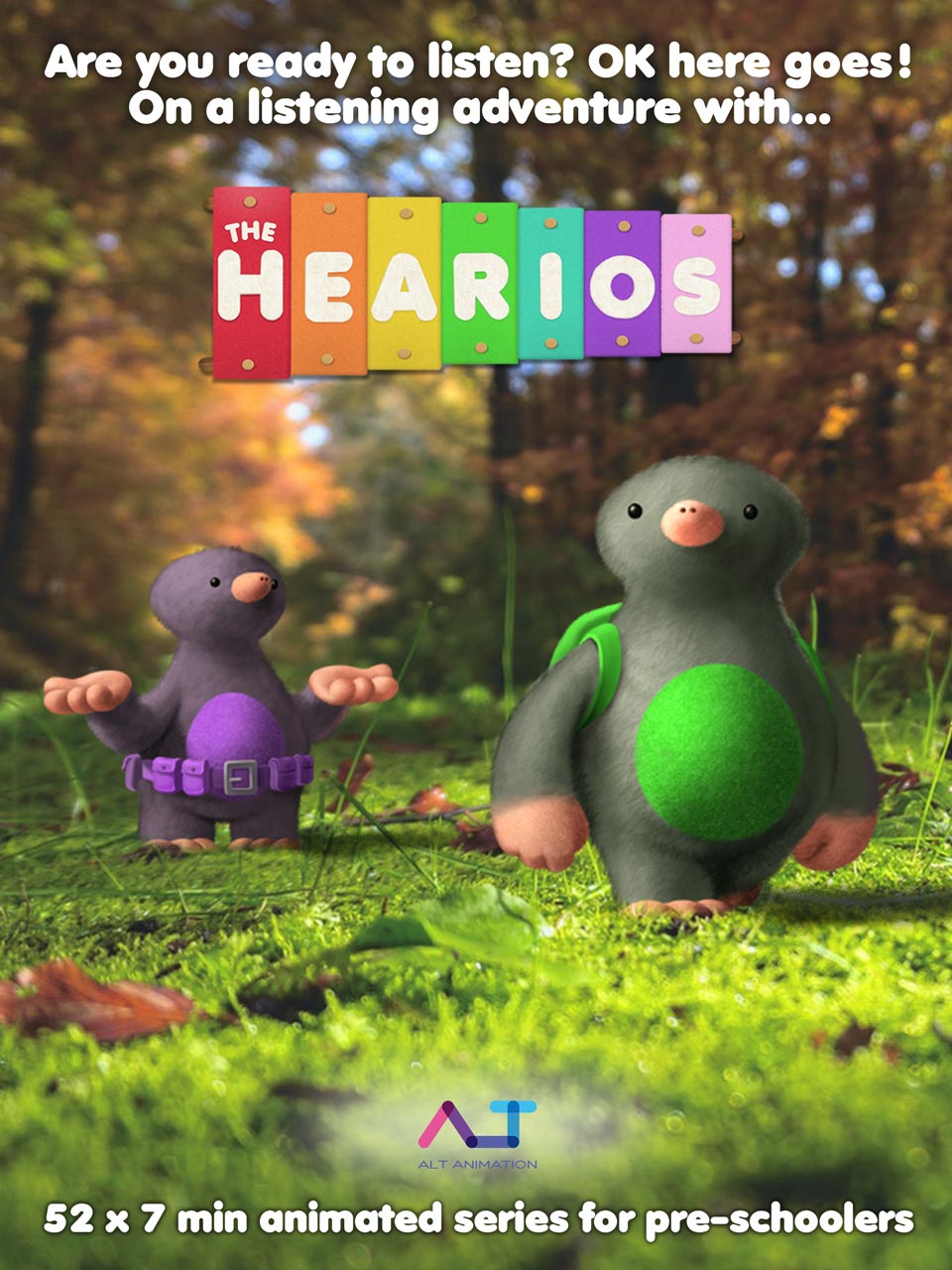 “The Hearios” is a 52×7’ stop-motion animation and live-action mixed media series aimed at a pre- school audience featuring a family of musical moles who are discovering the joy that can be unlocked through the art of active listening. The series follows the adventures of the Hearios who live deep underground in a quiet world where listening is not just a skill, it is a way of life. The moles go on listening adventures up above ground to find sounds from the mass of noise in our busy human world. Each episode is filled with lots of music, song, dance and fun, but it is the simple concept of teaching children the art of active listening that lies at the heart of the show.

At the first pitching session of Cartoon Forum 2019, we came across The Hearios, an interesting stop-motion/live action animation series project for pre-school aged children. It is the concept of cute moles, who represent the notes of the major scale, learning and enjoying the sounds of music, which can inspire the curiosity of their target audience and encourage the use of active listening of sounds around their daily lives. We interviewed Ann Bryant, the author of the story, after the pitch. She is the author of many children’s books and classroom music resources (You can find information about her work here). We are happy to share this interesting project with you through her words.

An episode entitled A Brush with Danger

Hideki Nagaishi (HN): Would you mind sharing the summary of the episode that you presented in your pitch?

Ann Bryant: First of all, there are all the characters, the moles, who live underground and are very short-sighted, so everything is about listening. There’s Do-Do, Ray-Ray, Me-Me, Fa-Fa, So-So, Lah-Lah, and Te-Te. Their tummies are each coloured according to the Western major scale. So, red for Do-Do, orange for Ray-Ray, Yellow for Me-Me, etc. Do-Do is the grandmaster: he’s teaching the young moles to listen.

The episode is called “A Brush with Danger”.

In this episode, the moles are all in the burrow and making a mess. Do-Do tells them to tidy up, and they start sweeping, but Me-Me, So-So and Lah-Lah start arguing about who is going to have the broom. The argument is all sung, each mole singing their individual note. This then starts to develop into a bit of a tune with the three notes arranged rhythmically.

Do-Do then says, “Okay, listen, I can hear a sound.” The moles can’t hear it because they’re not as good at listening as Do-Do as they’ve not mastered the art yet. But Do-Do can hear a sound above ground that he thinks would go really well with the melody that is developing. In each episode, he always describes the sound. In this episode, he says it’s a “swishy wishy” sound. So, off the moles go, exploring, and this is where they have their overground adventure. In this episode, in the park, they nearly get swung into by a swing, and when they stop to listen to the sound that the swing is making, they find it’s a squeaky sound. The narrator helps us along: “Is that the sound that Do-Do wanted? No, that’s a squeaky sound. Do-Do wanted a swishy sound.”

Next they have a contre-temps with the duck pond; “Is that the sound? No, that’s a ‘quacky’ sound.” Then, they find some children playing around in some leaves, and almost get trampled. “Is that the sound? Yes!” It’s a  “swishy-wishy” sound. The moles go racing back to the burrow to tell Do-Do. He’s delighted, but he’s not quite done with the listening game. He asks them to carry on clearing up and they’re not quite sure why. The narrator explains to the viewers that “He’s got something up his sleeve!”

And then they realize, as they’re singing and tidying up, that they’re making the swishing sound with the broom, which was always going to be Do-Do’s intention. Then the full song comes together with the swishing sound and the narrator joins in singing the lyrics, which rounds off the whole thing. The camera will then pan back up above ground.

There are countless sounds that we can use. I’ve actually written out 104 different sounds which can be found above ground that can be emulated quite simply with ordinary household items, so the viewing children can make the sounds too. And the settings are all very, very familiar for them as well. 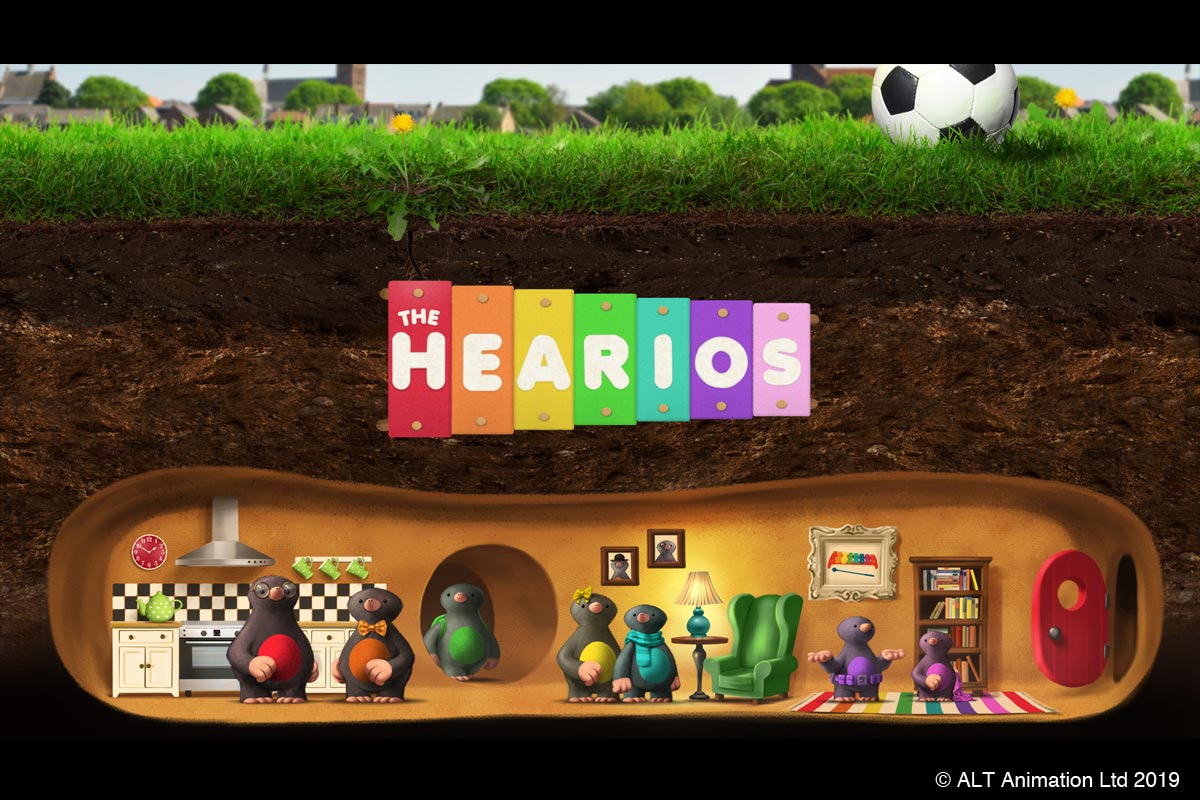 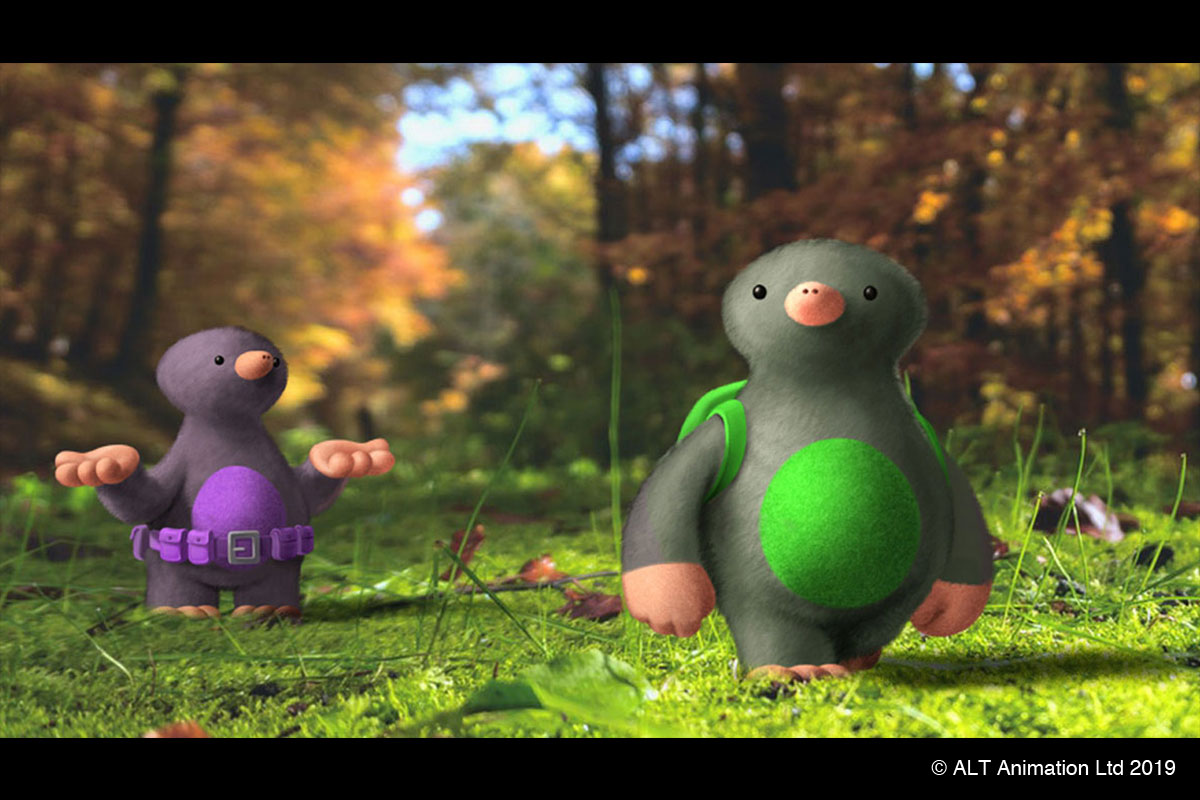 Career connections with the creation of The Hearios

HN: I also would like to hear about where the initial idea of the story come from, if possible.

Ann Bryant: It was directly connected to the fact that wherever I go, I’m aware that children are not listening properly.

I gave up teaching about 7 years ago, and I was only part-time teaching whilst writing music resources and children’s fiction, but I was really specializing in that young age group. During my last 5 years of teaching, I noticed a massive deterioration, year after year, in children who couldn’t focus and needed drawing in. In fact, we had a Special Needs department at school for children who needed help with reading, writing, help with any kind of learning, and I was quite close to the head of Special Needs for children aged 4-5, as a friend and also as a colleague.

Generally, over a number of years, it’s been the same: She would have 1 or 2 children referred to her in need of help by a teacher, but on the year after I left, she had 12 children referred, and she directly connected that with the fact that they weren’t getting their listening with me, which was very focused in music lessons, with lots of movement, story, drama, dance and singing. It turns out that I really got them listening and really drew their attention, so that they were, in a musical sense, anticipating, and ahead of the game. That absolutely translated into the classroom, clearly, because more of them needed that help.

When I started working with Andrea, Lee and Tim from ALT Animation, it was in connection with a small BBC project, for which I was the music consultant. We enjoyed working together and they asked me afterwards if I had any other ideas. I replied: “Yes, I’ve got this really strong feeling about a family of moles named after the notes of the western scale but primarily concerned with active listening.” So, that was how it started.

HN: You talked about your career, and I’m interested in that because it seems like it connects with your creativity that manifested in the characters, story and music of The Hearios. Could we hear a bit more on that?

Ann Bryant: I do presentations and workshops in primary schools, and international schools both in the UK and abroad, including the Philippines, India, Vietnam, Egypt, China, lots of places in Europe, New Zealand, etc. I always throw in a lot of drama and music because it’s my thing.

I went to Royal College of Music a while ago, and didn’t feel as though it was my place, it felt too narrow and classical. And even then, I did a lot of dance training, and I was keen on drama, I love to write poetry, plays and literature. I missed all those other aspects, but that kind of course didn’t exist when I was young. So, I managed to bring all those to my career later, especially ballet. Writing Ballerina Dreams was wonderfully fulfilling because I had to research it and so on.

HN: I think one of the attractive points of this series is the music that I heard during your presentation, which was good.

Ann Bryant: The musical aspect almost came by accident, and it became the icing on the cake. Although I start with making a melody, the whole point is the focusing on listening, getting that percussive element, which can be described in so many different ways, like swishing, thudding, popping, etc. And all those ways relate phonologically to words as well, so it’s very educational in that respect, but it’s subtle, hidden learning, almost learning by osmosis.

For example, Tim’s three-year-old has actually learnt which note makes which sound on his little coloured glockenspiel because he’s registered the colour of the moles’ tummies and heard what notes they sing. He knows, of example, that Me-Me is the yellow one, and so Me-Me’s notes on the glock is yellow. He’s learned how to do the ‘Everybody’s sweeping…’ tune very easily, by correlating those colours that he sees with what he sees and hears in the episode.

HN: How are you composing the music?

Ann Bryant: The starting point is always a little tune that comes into my head, so for example, one of the episodes is called “Let’s Pack Away”, so instead of it being Lah-Lah, So-So and Me-Me going out on the adventure, this time it’s Ray-Ray Me-Me and Fa-Fa. It’s just the simplest, catchiest little tune and the words that go with it, with everyday activities that are very familiar for the pre-school viewers.

HN: So essentially, the main music for this series come from you?

Ann Bryant: Yes, because I have that kind of dual career. Mark Gordon from Score Draw Music has created all the background score and the theme tune, but I create the song in every episode.

It’s lovely for me, because this really is the two sides of my career coming together. When I started writing, I logically started from music, because I went to music college then taught music. I threw in dance and drama and expanded it into something called “Dalcroze Eurhythmics.” That was the method I was taught myself, and I really believed in, but it became “Bryant Eurhythmics” after a while!

I started writing articles, songs, scripts for BBC Schools Radio, and then music resources for primary school teachers, but along the way, I just started writing stories as well, thinking “I’ll try to get something published but, I’m sure I won’t succeed.” And that’s when my writing career overtook the music career, and recently, over the last several years, I’ve been blending those careers, which is why this project is perfect for me because it’s a blend of what I love best: Story and music.