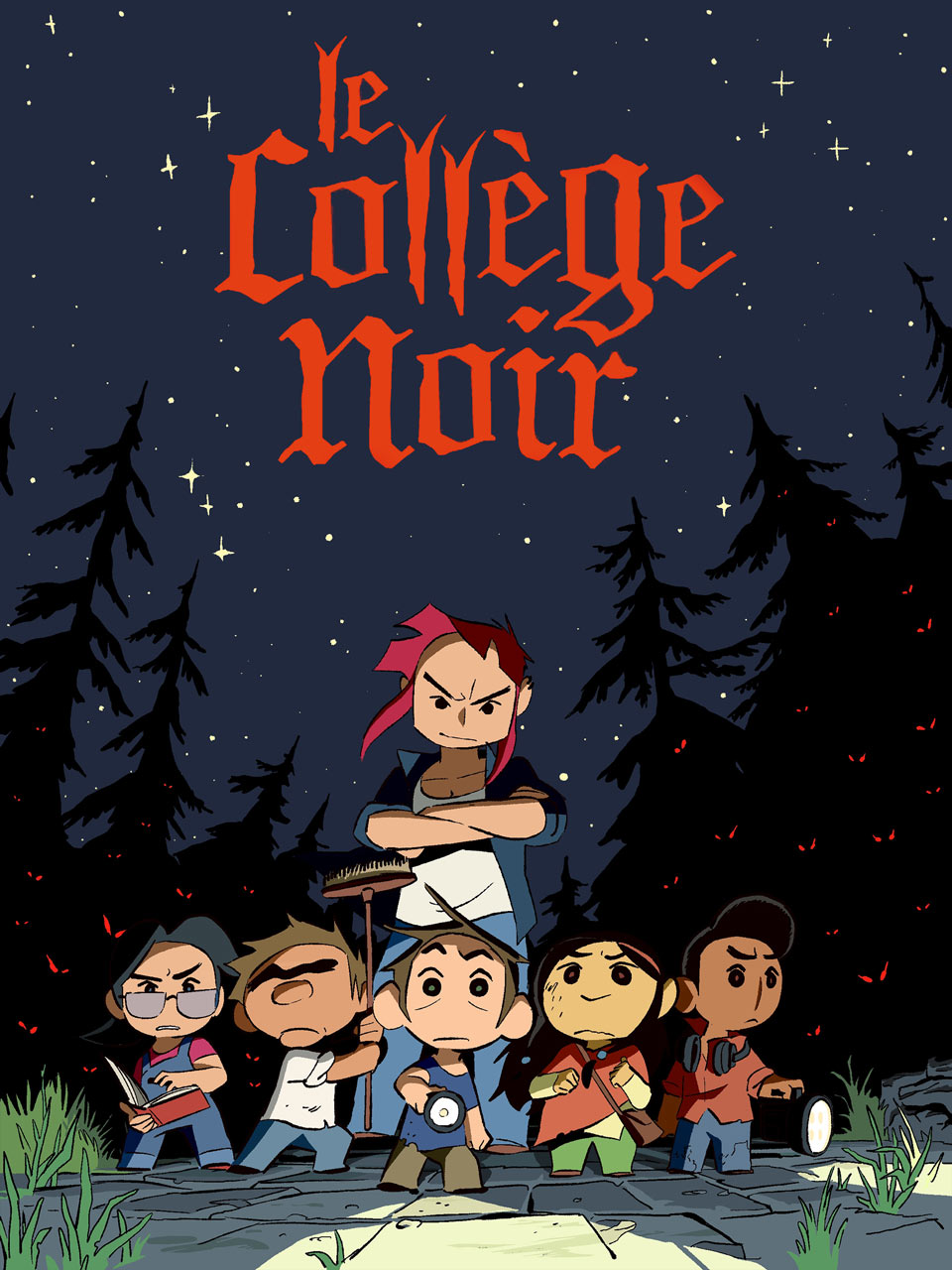 Looking back on his early teenage years spent at a boarding school, the author tells the tale of the many dark adventures, the torments inflicted by various demons and bogeymen that he and his friends suffered after a wicked witch had cast a spell on them. Isolated in the middle of the countryside, the school was built on the ruins of an ancient church. With a bored caretaker as sole ally, the kids will have to face terrifying encounters and overcome the most difficult situations which will challenge their courage and their friendship. 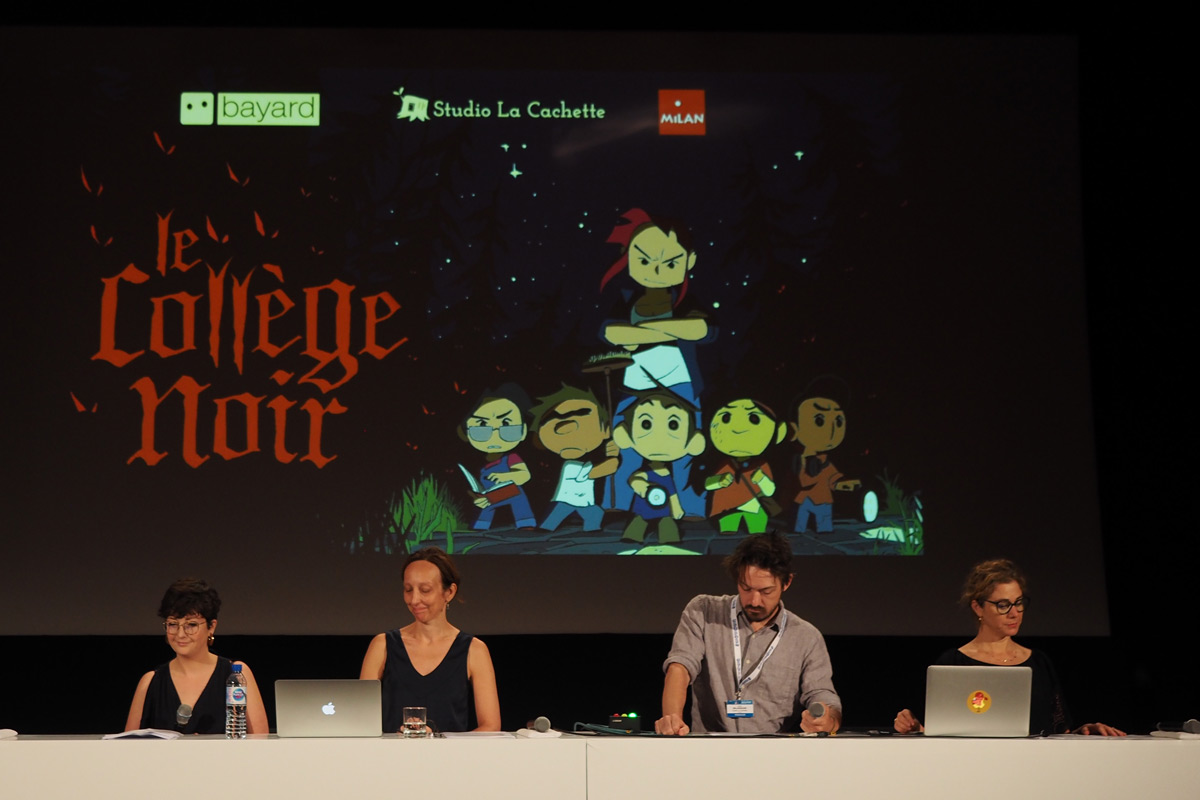 Le Collège Noir is a fantasy action-adventure animation series of a story with high school students, which is naturally an attractive project for teens. The pitch of the project during Cartoon Forum 2019 was so popular that the attendees outnumbered the chairs in the room.

We’ve heard from Ulysse Malassagne, the author and director, and Erika Forzy, the producer, on the story behind the project.

Hideki Nagaishi (HN): Could you please let our readers know about the story of the animation series, in brief?

Ulysse Malassagne: So, it’s a story of a group of high school students that are pretty much studying and spending their vacations in this a little school lost in the French countryside, which is basically a very rural place with a lot of myth and legends around. One day, they end up making a witch angry who then placed a curse on them and they are going to have to deal with all the creatures and dark monsters that will come for them after that. They are going to have to fight the dark forces around their school.

HN: The story you told me now is based on your original comic books. Where did the initial idea of the story come from?

Ulysse Malassagne: The comic books were originally published in a magazine, and the only thing the publisher asked me was to make a horror story for teenagers. During the same time, I was already thinking about making some comic books about my student years, since I actually was in a little school lost in the countryside. So I decided to mix both of them. It’s half reality, it’s something that truly happened to me and the characters are based on me and friends, but I’ve added a lot of fantastic and horror elements in it. 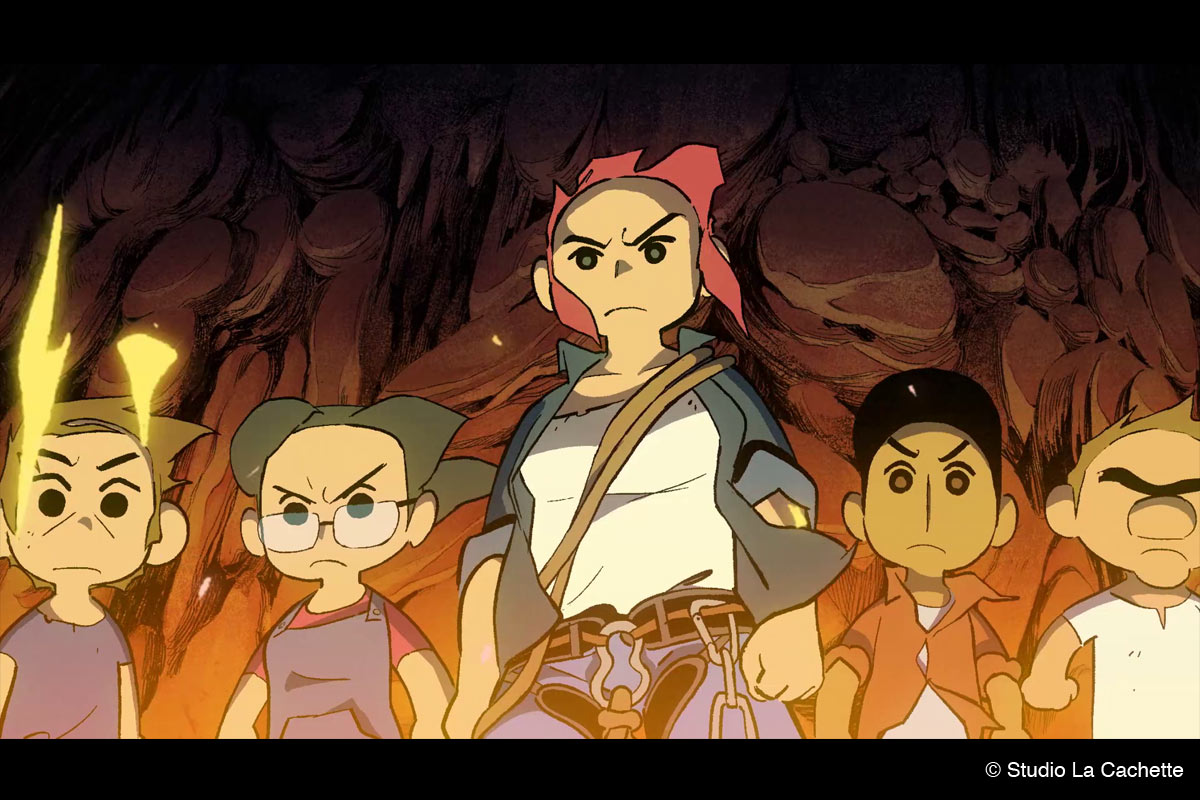 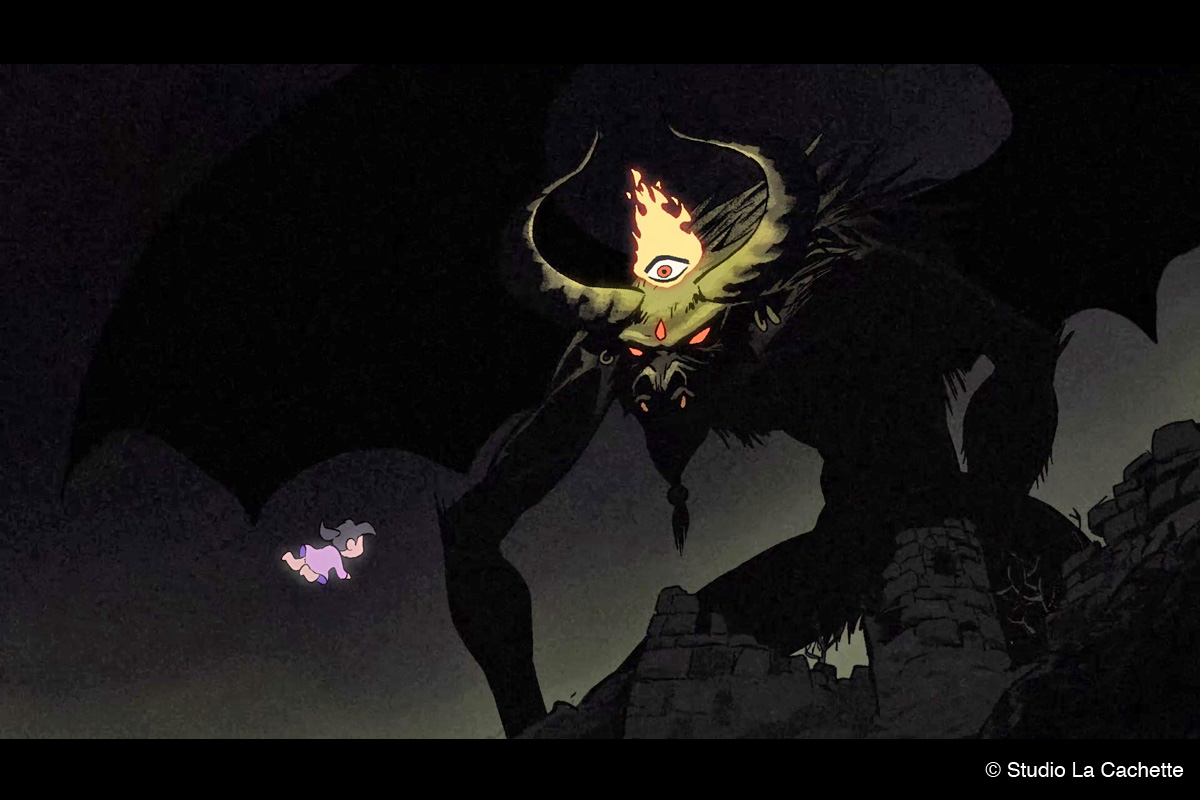 HN: Regarding the story of the animation series, what do you think are the attractive points for your target audience?

Ulysse Malassagne: I think it’s something that’s a bit missing now, which are animated series and films that plays with these elements of dark and horror for kids. You had a lot of things before in the 90s, such as Goosebumps, The Dark Crystal, Don Bluth’s movies, and there were some Japanese animation series that came to France that felt more mature and dark in tone, and teenagers, including I, loved that. Now, it is a little bit harder to find. I think that is the attractive element of this show, I wanted to give teenagers this kind of dark-tone, mature stories and universe.

Erika Forzy: The target audience we’re talking about is 11 to 15 years old, roughly, so young teenagers. They are fascinated by the dark side of life in general. There are a lot of things they are about to discover, and this is a metaphor of this. The creatures are a metaphor of what might come, like death and war, things that could happen to them in real life that are a part of adulthood. We, as adults, comprehend a lot of more and for them there are still some things they need to digest, so a good way of releasing their fears is having a story like that.

Ulysse Malassagne: The teenage years are really the moment where you start to ask yourself all those questions, all of those existential things, about “who I am” as a person, to get conscious of everything around you, death, and so on. I think it’s a good moment in life to actually have those kind of series and movies to help give you an idea of what’s going on.

Erika Forzy: It’s a coming-of-age story, because they’re able to work as a team, to also individually get stronger and react very quickly on how to solve the problem, and how to fight the demons.

Ulysse Malassagne: As we want to use to present all the dark elements, but it is still a very positive show. It’s not depressing, it is actually about how you overcome those frightening things by being with your friends, by helping each other, being stronger and having courage. It is about positive values. 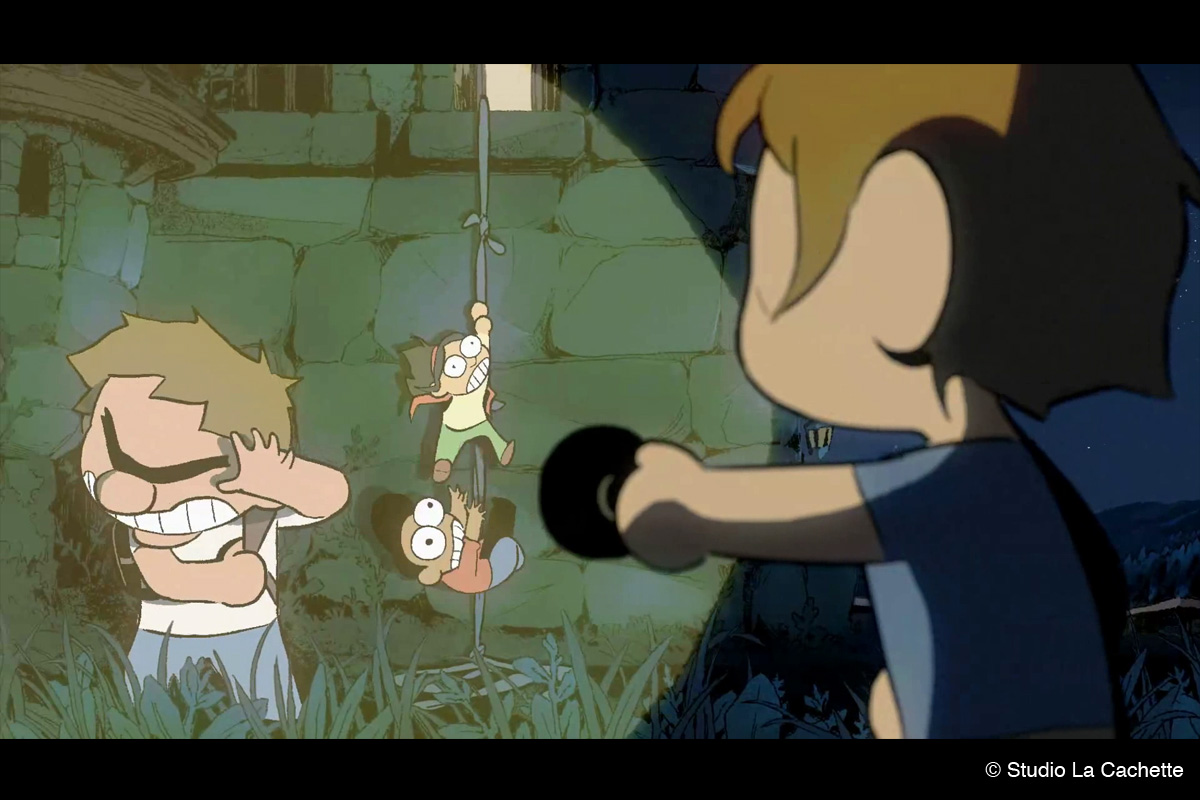 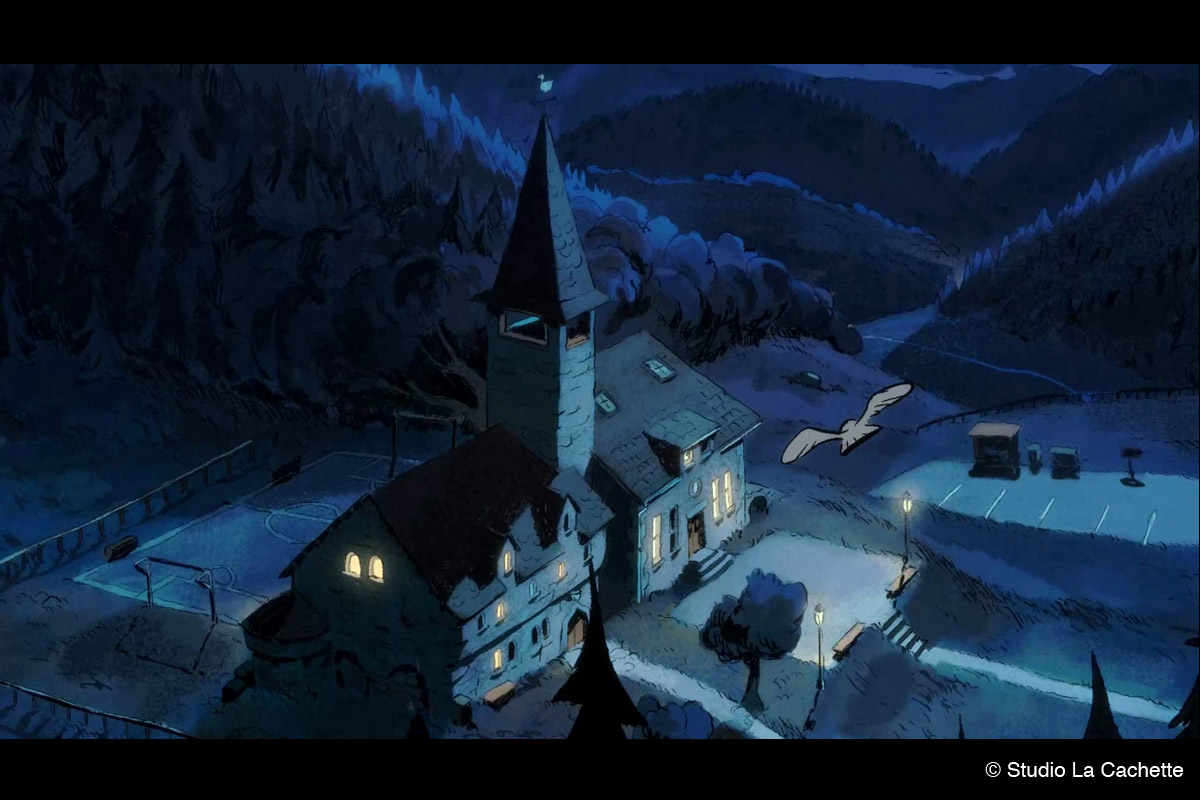 HN: In the original comic books, the visual design of monsters and other fantasy creatures has a realistic design. On the other hand, I feel the design of monsters in the animation series is simplified, the same style as the human characters. Anyway, I would like to hear the story on the visual design. What did you take care of in designing the visuals of characters, monsters and backgrounds for the animation series, so far?

Ulysse Malassagne: I think for the characters and monsters, a technical and practical concern is that we have to animate those characters, so we might have to simplify them a bit. The monsters are less realistic because it would be more complicated to animate them with all the details that work in the comic books.

So, part of the process of every comic book adaptation is to adapt the style to make it in animation. For the animation series, I think it is interesting to go maybe a bit deeper between comedy and dark horror, because I think the comic book had a bit more freedom to be just a bit more scary. For young viewers, it’s not going to be as impressive or impacting as seeing animation. Animation also include sounds and the atmosphere can be more impactful for young audience, so making characters a bit more cartoony, and the monsters also a bit more simple and cartoony, helps to play with this balance between showing some very serious horror stuff but still being okay for pre-teens and even children to watch.

HN: This is a fantasy adventure starring teenagers, correct? I personally would think that the audience might expect good and exciting action scenes. How are you taking care of the action scenes in this series?

Ulysse Malassagne: Action scenes are definitely going to be a big part of the show, also as a way to make things more exciting.

Erika Forzy: As an animator, Ulysse is a big fan of action, animation, slightly Japanese-influenced, etc. If you see some of the works he has done in the past, there are lots and lots of actions!

Ulysse Malassagne: The studio is very focused on adventure-driven stories, a lot of action and exciting moments, so the series would be continuing the identity of the studio.

HN: Being based on a comic, what things can you add when making action scenes?

Ulysse Malassagne: The movement will add a lot to the action scenes. When I do my comic books, I always get influenced by animation, anyway, so I almost see it as a movie myself.

HN: When you drew the original comic books, you were already visualizing the movements?