HN: The protagonist of the story is a boy in his fourth year of elementary school, but he is a very intellectual boy who can scientifically deduce as well as adults. Thus, I felt that this is a sci-fi/fantasy story that not only children but adults can enjoy. Did you pay attention to particular age groups such as primary school students or high school students as the target audiences while you were developing the film?

Hiroyasu Ishida: I think I intended to have the perspective from the adults who worked for this project from the beginning. Actually, I thought once that this film would be for young adults, because this is a difficult story.

However, I totally forgot about those things when film production started, and I just cared whether the film will be what genuinely makes me feel comfortable by watching it. I developed the film by imagining as if I was the first audience and asked myself over and over questions like, “Is this what I really wanted to do? Am I truly enjoying this creation? Does it make me laugh? And does this story touch my heart?” Then, I had additionally received opinions from the staff. So in the end, I didn’t consider about the age of the target audience whilst developing the film.

If I may digress from the main topic a bit: When I attended a business meeting to discuss the main theme song for this film, which was written, composed and sung by Hikaru Utada, I was asked by one of the producers at the meeting whether I had a particular age group in mind as the main target audience for the film. I answered, “I am making the film feverishly without any thought on target ages”, and then an experienced producer, who has been working with Ms. Utada for long time, said to me, “I think that is good. That is a better way. Utada’s creative activity is the same. I think it is better for creators to have that kind of creative stance.” His words impressed me.

HN: The film happened to attract both children and adults, despite not having target age groups in your consideration, as you said previously. Could you analyze what choices have you made in directing this film that could have led to such an outcome?

Hiroyasu Ishida: I think this film has both aspects of light and shadow. The animation Studio Colorido created before Penguin Highway are generally stories focusing on the bright side of human society, which is easy for children to understand. And I think that the market expects us to create that kind of animation. But what I thought from the beginning of the Penguin Highway film project is that I want to describe not only light, but shadow. I want to draw a strange, eerie, or scary feeling in this film.

When I remember my childhood, what left the biggest impression on me are experiences that are the combination of two completely opposite emotions, such as things that were fun and not fun, and things that were scary but also made me happy. Actually, one of the reasons why I was attracted to the original story of Penguin Highway is that the story portrays a dark part of childhood. So, I paid attention to the staging of the two extremes in the film, fun things and scary/sad things, for Aoyama.

When I make animation, I always thought that animation is what I need to uncover my true thoughts on something. This time, I naturally thought that I would like to depict both light and shadow in the film, which are the “fun things” and “scary/sad things”. I think it might’ve resulted in making this film have such a large audience.

For example, I think that probably children simply have fun with Aoyama and his classmates’ lively scenes, and adults maybe enjoy the science-fiction part of the story, such as the mysterious creature, “Jabberwock”, or an unknown world, which we call “The Sea”, as the “scary/sad things”. So, that is to say, I was not so conscious about the target audience while we were developing the film. 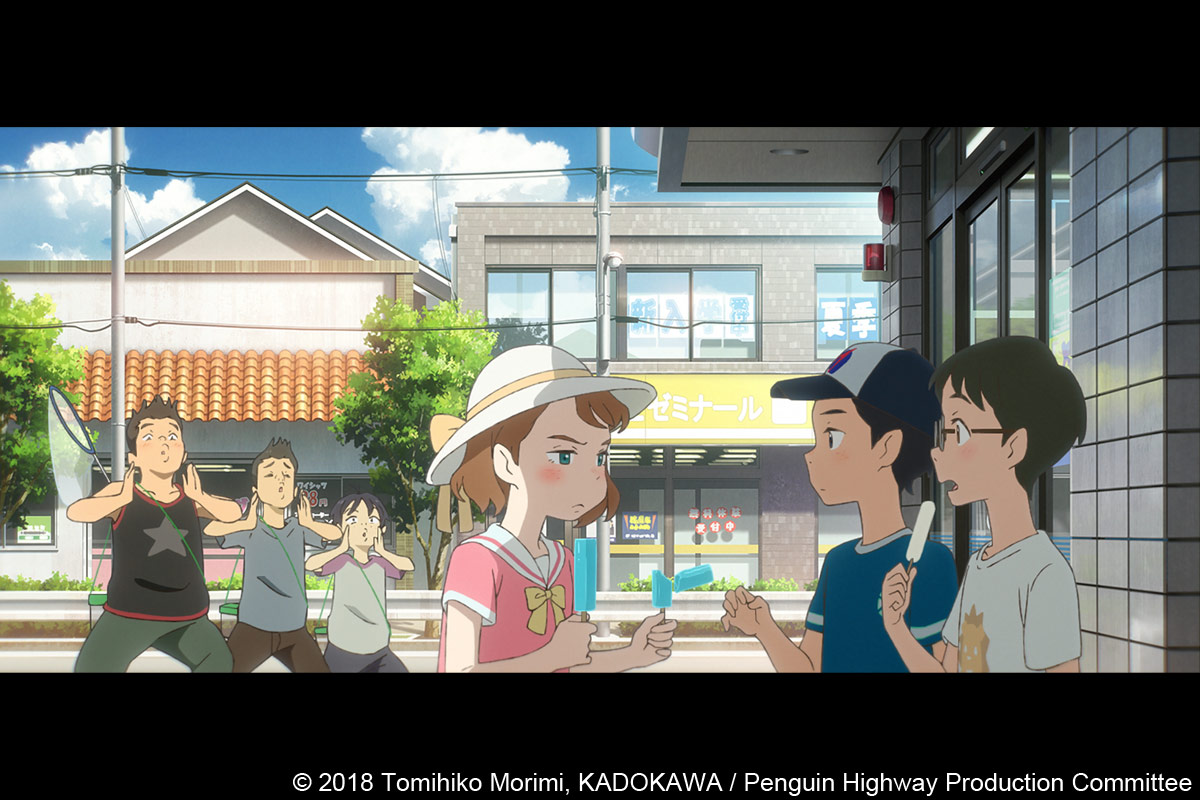 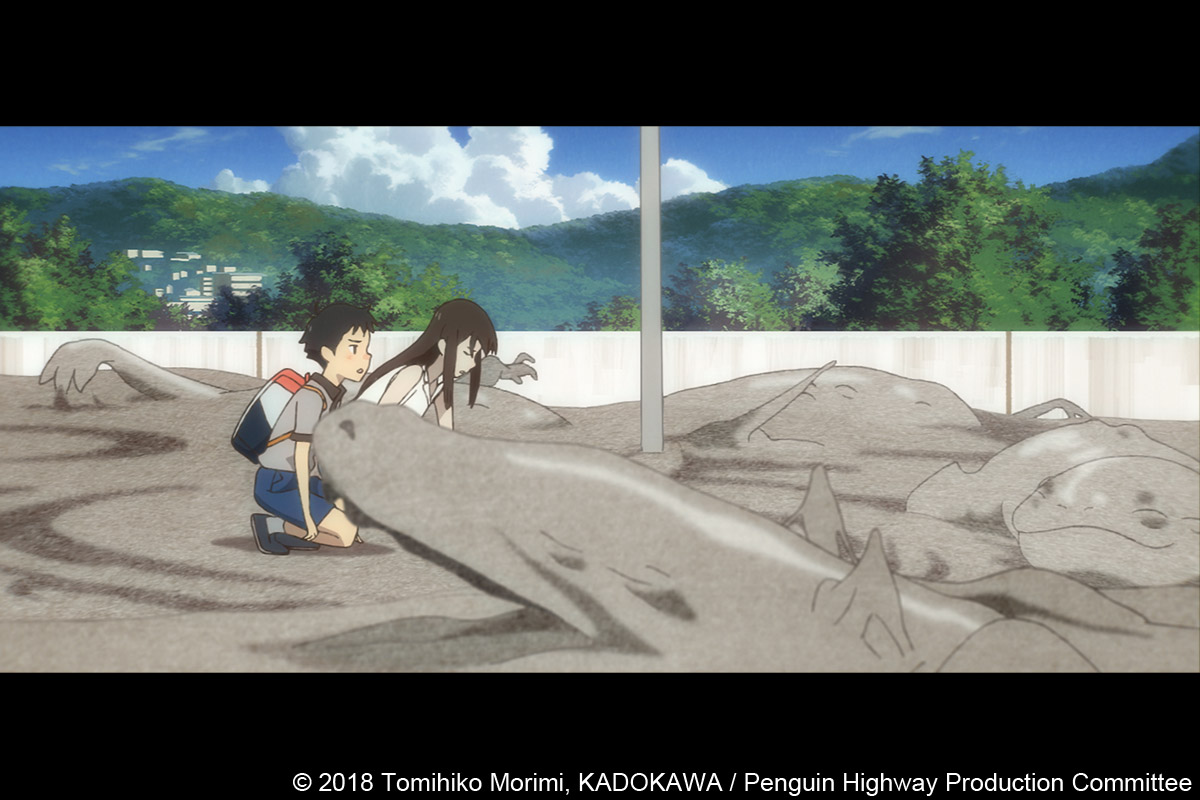 HN: There are some places with fantasy elements in this film, such as a forest, a grass field and a seaside town. The background art of the scenes in those places are really stunning and I felt like the main character and I were experiencing the same emotions, as he has new adventures in new world. I would like to hear the story behind the art direction in designing film’s universe.

Hiroyasu Ishida: Regarding the background art for the scenes of daily life, I intended to describe the feeling of reality as much as possible. For the scenes with fantasy elements at the seaside town, which is called “The World’s End” in the story, the grass field, and “The Sea”, I designed the sceneries and the universe by becoming more imaginative, because those are imaginary places.

Actually, there is no big difference between the final visual design of the grass field and my first design sketch for the grass field in my first project proposal. I designed it before I drew the storyboards. I carried out my original intentions for the universe.

Regarding the design of the forest in the film, it includes some my original creations. I drew some trees that look like white birch, which do not grow in the main island of Japan*6. When I took a trip to the Shiretoko Peninsula in Hokkaido*7, I saw the green there and thought:  “That’s nice!”

So, I brought the vegetation from the Shiretoko Peninsula into the forest in this film when I designed the scenery. I also recalled the cold dry wind that blows through the extensive Kushiro Marshland*8 in Hokkaido when I designed the grass field for the film.

Hiroyasu Ishida: I also put many of my own ideas into the design of the seaside town because I wanted to express a part of the story’s universe that would properly make the audience have feelings of strangeness or fear. It ended up creating a jump in the town’s description in Mr. Ueda’s script from Mr. Morimi’s original story.

What I wanted to express in the scene at the seaside town was that it is like a different world made by someone with a will that is not human, beyond human territory, and we feel the ring-like structure of the world, like the Ouroboros*9. It is kind-of an abstract concept.

I drew the scenery with the feeling that it is a world consisting of different rules compared to our real, human-inhabited world, and the world is barely recognizable as three-dimensional from the vantage point of our real world. Still, you can find several things in the seaside town that are from the town in the real world, where Aoyama lives. I thought a lot about the rules and balance of embedding those ideas into the seaside town when I designed the scenery.

*9: An ancient symbol depicting a snake eating its own tail.

Hiroyasu Ishida: I would like to say one more thing about the design of the seaside town: In the film, Aoyama goes through the town, along a river. I designed the river in the seaside town, which flows to a postbox at the center of the public square, to have a connection with the map Aoyama and Uchida made as a part of “Project Amazon” by researching about a river in the suburb they live in.