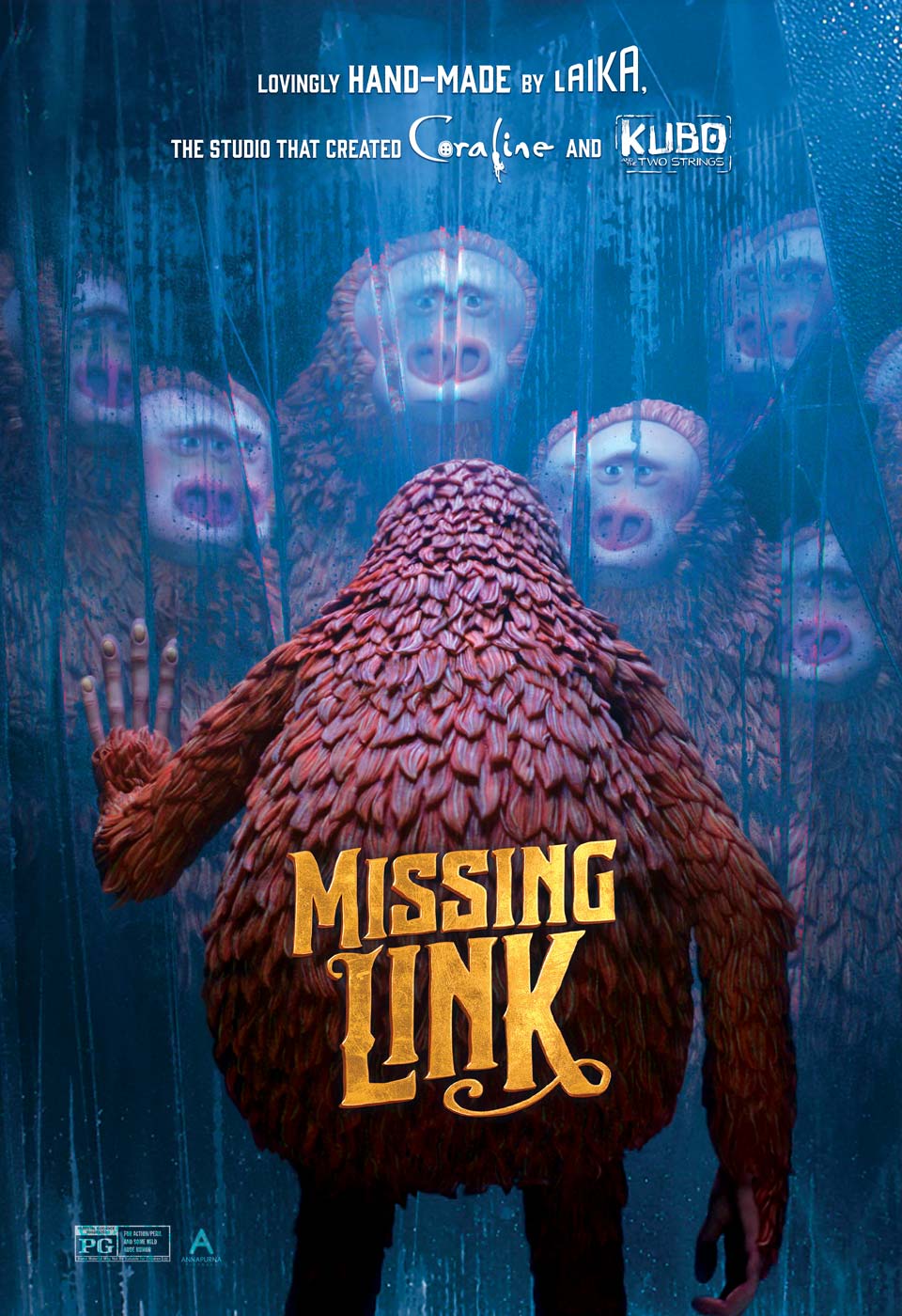 Synopsis
Funny and gentle Mr. Link, the very last of his species, yearns for companionship and a place where he belongs. To help find his rumored cousins in the fabled Valley of Shangri-La, he recruits Lionel Frost, the “world’s greatest” sleuth of myths and monsters. Together with courageous adventurer Adelina Fortnight, they embark on a hilarious globe-trotting journey to find Link’s far-flung family.

Missing Link is the latest featured film from LAIKA, a multi-award-winning Animation studio recognized as one of leading stop motion animation studios in the world. The film is expected to win many prestigious awards, including Annie Awards, Golden Globe Awards and more, not unlike LAIKA’s previous films.

Missing Link tells the adventurous and funny journey with a band of misfits: Sir Lionel Frost, an explorer and investigator on mythical creatures, Susan Link, a creature discovered by Lionel known to be the missing link, and Adelina, the widow of Lionel’s past partner with a no-nonsense attitude, with rich visuals only made possible by LAIKA’s stop motion technique.

We had an interview with Chris Butler, the director/writer of Missing Link, during his stay in London for the retrospective screening event of LAIKA’s film library, and heard the story behind of the creation of Missing Link in-depth. We are happy to be able to share his insightful words with you.

Animationweek (AW): How was the initial idea of the story for Missing Link developed?

Chris Butler: I feel like I get asked that a lot, and I feel like I change it subtly every time! Because the truth is, I started writing it more than 15 years ago and I’m not exactly sure when it first popped into existence, but I’ve got a few notebooks that I’ve had over the years, and there’s probably about 10 ideas in there. That’s all I’ve ever had! 10 ideas and I just keep going back to them, they evolve over time and sometimes I lose interest in one and go on to another and one of them was Missing Link.

The kernel of the idea was I always wanted to do kind of an animated Raiders of the Lost Ark (1981); so, it was like an Indiana Jones and I’ve always been a Sherlock Holmes nut, so I think the idea for this was Sherlock Holmes meets Indiana Jones meets Planes, Trains and Automobiles (1987). Originally here was a story that I had about Sir Lionel Frost, who’s the world’s first cryptozoologist, but Link wasn’t in it. I think Sir Lionel was chasing unicorns, weirdly enough. And I had a different idea, which was about a lonely Bigfoot, trying to find his family and I kind of smooshed the ideas together and that was Missing Link.

AW: So, when it came to writing the script, what did you particularly take care of in doing that, and what was your favourite part of the story to work on?

Chris Butler: I knew it was going to be a big adventure story. That was a departure for me in that I’d never really written action before. I’m very much a dialogue writer; I love dialogue. And I think sometimes people are a little critical of that in animation, they feel like animation should be ‘more show, don’t tell’, but I strongly believe that animation is just a medium and you should be able to tell any story in it. If you ask anyone what their favourite movie is, they will probably name a movie that’s got lots of dialogue in it because dialogue is human interaction. Communication. I think that’s what’s most interesting to me.

In the Western world, animation ebbs and flows, but it’s still seen as a kids’ medium, and I think there is this feeling like if characters are too verbose, it’ll go over kids heads or, you know, it’s like we’ve gone five minutes without a fart gag, someone needs to fall over immediately! And even though there’s plenty of fart gags and falling over in this movie, what I find most interesting is the dynamics of human interaction. I was really interested in having a leading character who was pretty unpleasant, egocentric, borderline sociopathic, and that was very much influenced by Sherlock Holmes, who I think is a hugely compelling literary creation, because he is so flawed; he is so unpredictable and unpleasant. He lacks social skills, so if you put him in any situation, it becomes an interesting situation and I wanted that same feeling with Sir Lionel, but it’s a balancing act because you don’t want to turn the audience off. And yes, there are going to be a lot of children watching this, so I don’t want them to be turned off by the main character, but of course I’m helped in this particular story because Link is so genuine and lovable that he is the yin to Sir Lionel’s yang. 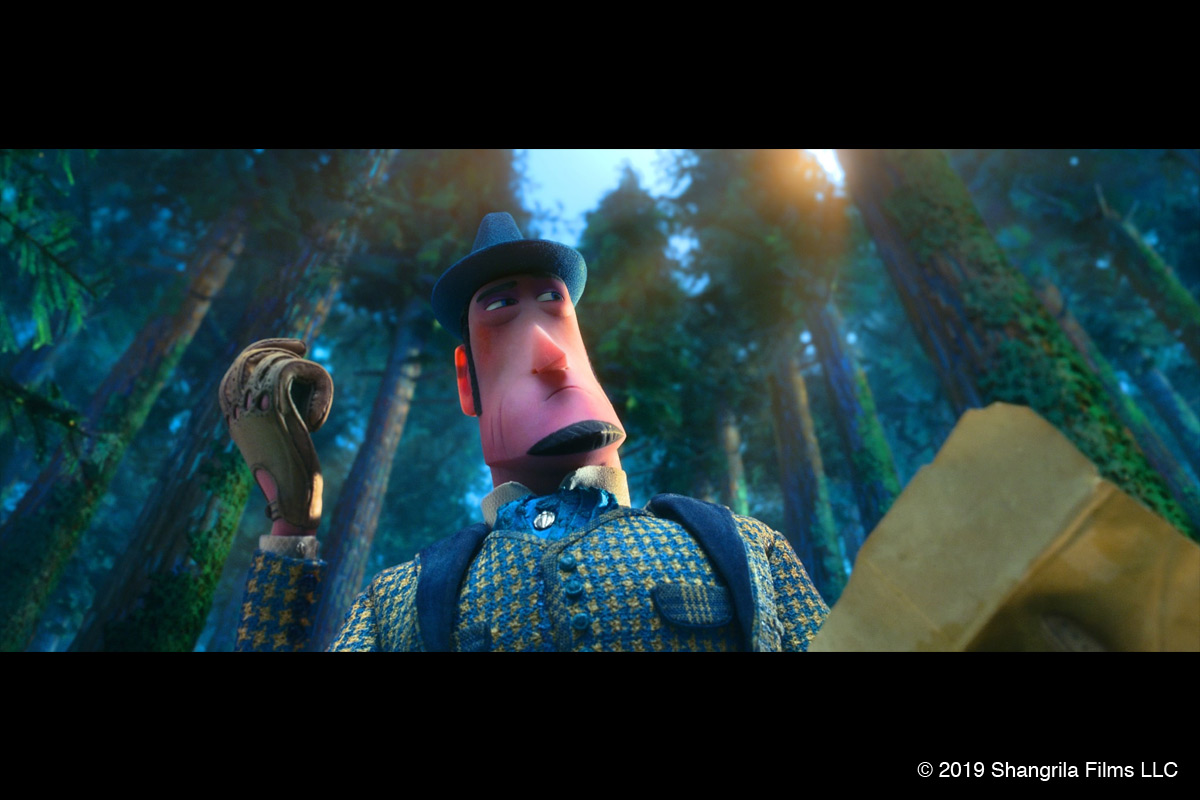 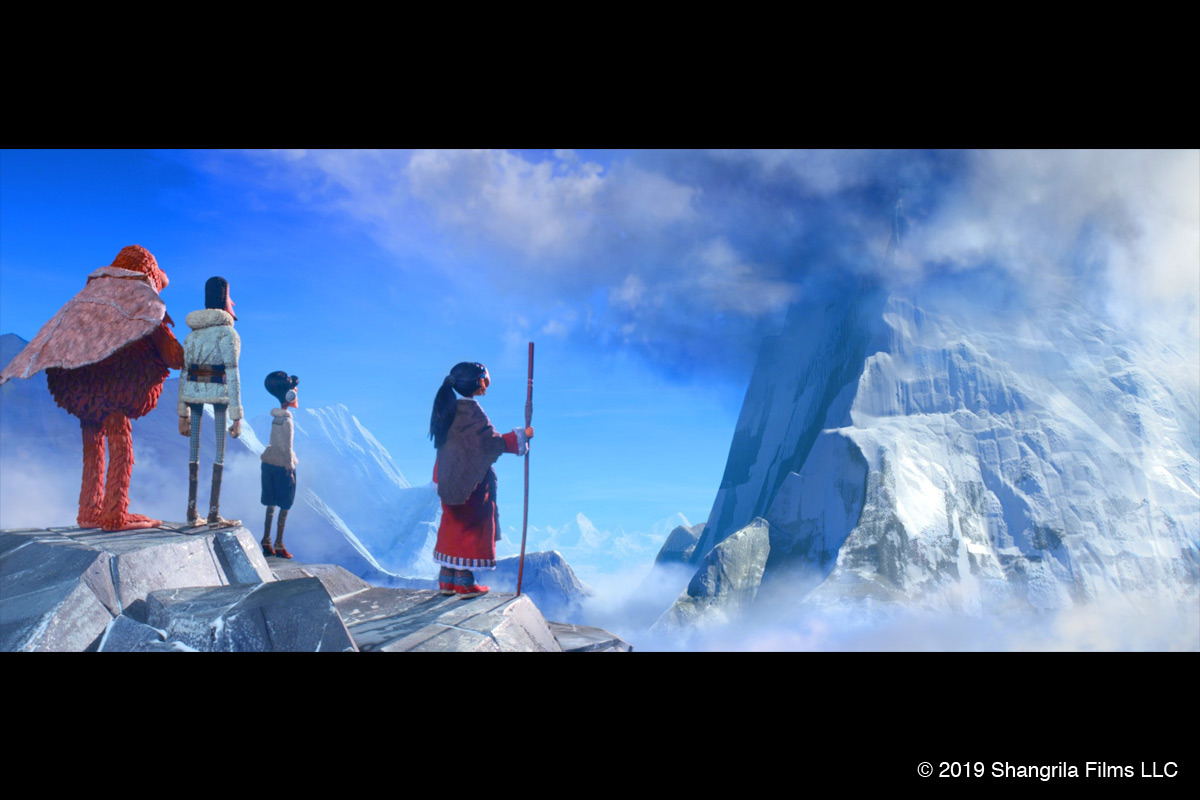 AW: Speaking of which, there’s a really lovely synergy between Lionel and Adelina and Link, but what difficulties did you face developing those three main characters and those relationships?

Chris Butler: Sir Lionel and Link developed pretty easily, I’ve got to say, because I think that was the core of the story…

AW: And Link as Susan – that was genius by the way…

Chris Butler: Thanks, that was important to me. Very important, because I talked about this being an action movie, but it was very important to always have something else to say, for family entertainment, to have a theme that has some kind of importance. I don’t want to be didactic and I don’t want to be preachy, but I do believe the best kids entertainment is the stuff that’s challenging and has got something to say. And for this, it was about identity and how your identity is chosen by you and not put upon you by other people. So that Susan joke, and even though it plays as a joke, that’s the meaning, that’s what I really wanted to get across.

I think the trickiest one out of all of them was Adelina because there’s a danger because it is really about these two guys, there’s a danger that if you bring a female character into that, that she might feel side-lined or she might feel like she’s just there to provide a feminine touch and I was loathe for that to happen. What I wanted was for Adelina to provide some hint of a backstory of Sir Lionel because they had a relationship and I thought that could potentially be a good dynamic, but it was also about all these characters going off on this adventure, but they’re looking in the wrong place. They’re all trying to fit into something that they don’t really need to fit into, and that was Adelina’s story too. Zoe Saldana was a great part of that.

We work with some pretty big names, some of them have done a lot of voice acting, some of them have never done it before, and it’s quite daunting, I think, because they’ve got the script, and a booth. That’s it, they don’t have props, they don’t have sets, they don’t have other actors most of the time to act against, so it’s just them on their own. And it’s a very pure form of acting. And I think once they get into it, they all enjoy it, and they’ll read lines in a way that I wasn’t expecting, and that’s when it becomes very exciting to me because it starts to take on a life of its own.