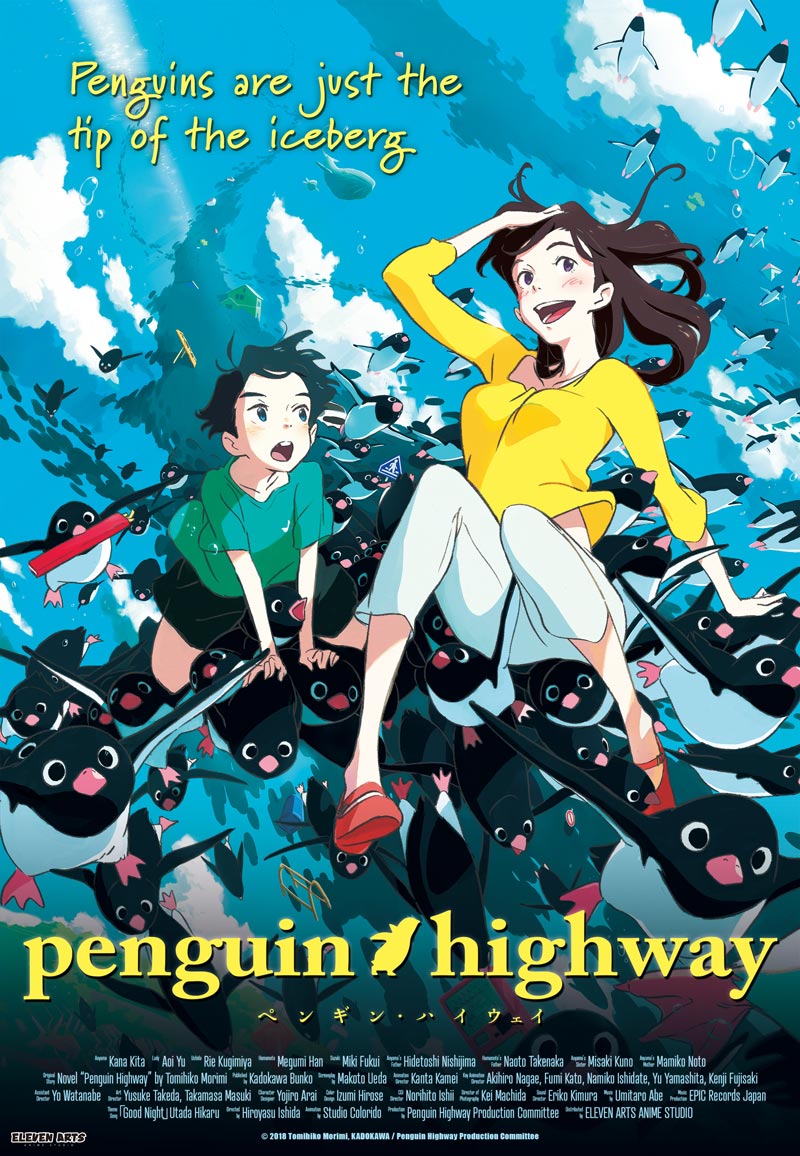 A boy in his fourth year of elementary school, named Aoyama, is learning more and more each day about the world around him, and taking notes of them. He is smart and studies every day, putting his effort, so that he thinks he will be a great man in the future. The most interesting thing for Aoyama at the moment is a young woman that he calls “Onee-san”*1, who works for a dental clinic that he goes to regularly. For him, she is a freewheeling adult who is very friendly, but mysterious in some ways. So, he is researching seriously about her as well.

One day, about a month before the summer holidays, suddenly many penguins appeared in a suburb he lives, which is a residential area far from the sea. While the people in town had been in panic, the penguins disappeared. Where on Earth did they come from, and where could they have gone? The boy, Aoyama, started to research about the “Penguin Highway” to solve the mystery, and then he saw that the can of cola “Onee-san” threw abruptly was transformed into a penguin. She declared with a smile to Aoyama, who was staring at her blankly, “Why don’t you solve this mystery? Can you do that?”

On the other hand, Aoyama and Uchida (a boy who is doing some research in the town with Aoyama as part of their extracurricular activities) are told from their classmate Hamamoto that there is a big, floating, transparent sphere in a grass field deep in a forest. Aoyama, Uchida and Hamamoto proceed with their research about the floating sphere, which they call “The Sea”, as well as their research on the mystery of the penguins, despite having their research disturbed by Suzuki, the boss of the kids of their class, and his followers. Then, before long, Aoyama starts to think that there might be some connection among “The Sea”, the penguins, and “Onee-san”.

Will he be able to solve the mysteries of “Onee-san”, the penguins, and “The Sea”?

*1: Japanese children frequently refer to a woman who is older than them as “Onee-san”, instead of calling her by her name. In the film, the name of the woman who works for the dental clinic is not uncovered and Aoyama calls her “Onee-san” throughout the film. 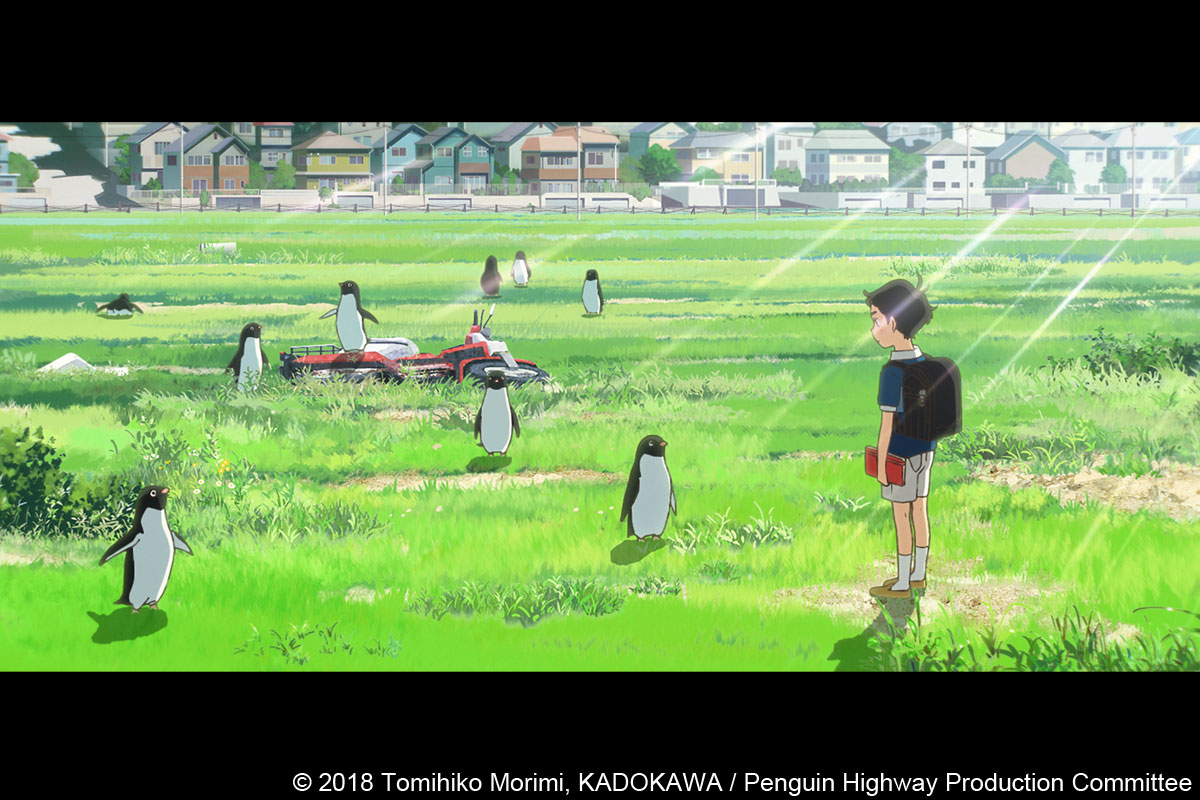 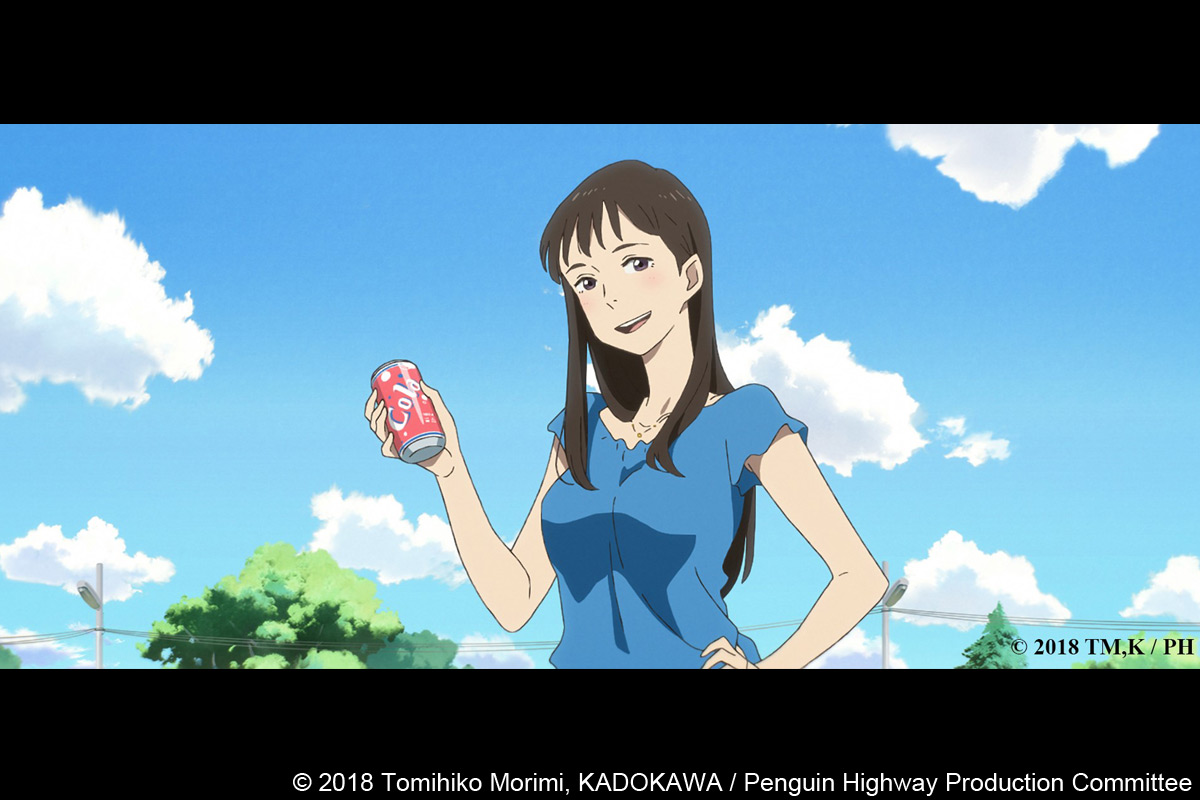 Penguin Highway is a Japanese animated feature film targeting an age range from children to adults, and is based on a novel of the same name written by Tomihiko Morimi, a popular novelist in Japan. The film was theatrically released in Japan on 17th August 2018. The film is planned for its North American theatrical release on 12th April 2019. Preparations for bringing the film to European cinemas are underway.

Some of Mr. Morimi’s novels have been adapted into animation*2, and among them Penguin Highway became the third title of his to receive an adaptation. The director of the film is Hiroyasu Ishida, an up-and-coming young director from Studio Colorido who was spotlighted in Japan for the first time when he made Fumiko’s Confession (2009) as his graduation work. Since then, he has been making animated shorts such as Sonny Boy & Dewdrop Girl (2013).

Studio Colorido, who developed the animation, is a rising young Japanese animation studio that is quickly gaining momentum.

This film project was presented at the Annecy International Animation Film Festival 2018 as one of the animation projects for the “Work in progress” sessions by Mr. Ishida, the director, and Yojiro Arai, the character designer and animation director. Ishida told us that he read more than 10 novels that interested him when he decided to make an animated feature based on an original story, and he selected Penguin Highway among them because he was attracted to the fact that it is a good sci-fi/fantasy story, and yet the story carefully describes the daily experiences and troubles in the ordinary daily life of the protagonist, a boy in his fourth year of elementary school. The author, Mr. Morimi, won the 31st Japan SF Grand Prize with the novel, Penguin Highway.

We could have a precious opportunity to hear from the director Hiroyasu Ishida about a variety of things on the film, in detail. We are happy to deliver his words to you.

Start of the Project

Hideki Nagaishi (HN):  Could you please let us know how you took part in the film project?

Then, we were able to produce our mid-length film Taifu no Noruda through Mr. Yamamoto as well in 2015. Yojiro Arai directed the film and I did the character design and animation direction for the film. Mr. Arai also works for Studio Colorido and he was responsible for the character design and animation direction of Penguin Highway.

After we completed the film Taifu no Noruda, Fuji TV gave me a broad suggestion: “Let’s do something together. If possible, could you please plan a full-length feature film?” That was the beginning of the Penguin Highway project.

I was very happy and honored when they kindly suggested a project plan for making an animated feature with me. On the other hand, I wondered if I could really manage directing a full-length feature film. Actually, I had thought about an alternative plan for a mid-length animation project, but when I encountered Penguin Highway, the original novel, I thought that it was a very good, attractive story, so I could prepare myself in assuming the role of director for a feature film, if I could make a film based on that story.

*3: Mr. Yamamoto established TWIN ENGINE Inc., an animation production company, in 2014 after leaving Fuji Television Network, Inc. Studio Colorido is one of the subsidiaries of TWIN ENGINE and he serves as chief executive of Studio Colorido as well.

HN:  What kind of process was there, from just after you decided in your mind to make a featured film based on Penguin Highway, to the film project getting off the ground?

Hiroyasu Ishida: Actually, it took quite a long time to get the permission from the author, Mr. Morimi, to make a film of the original novel.

At first, I was in deep thought with the original story and considered whether I would honestly be able to bring this original story properly into an animated feature film format.

After that, I prepared a proposal. I drew the visuals of the characters and the universe of the story, and storyboards which followed the story structure of the original novel. Then I showed the proposal to Mr. Morimi, but I couldn’t get the permission from him at that time.

Mr. Morimi was apprehensive about my design of Aoyama, the main character, in my proposal. I think Mr. Morimi probably couldn’t see how the dark or mysterious parts of the story would be depicted from this proposal, because many of my past works were positive and cheerful animations, and Penguin Highway is a story of both light and shadow. He was also worried about my age because I was quite young as a director for a feature film in the Japanese animation industry.

Aoyama was designed as a boy character who looked very gentle in my first proposal. Characters in my past works seemed to affect the design of Aoyama. So, I read up on the original novel again much more carefully and fully reconsidered Aoyama’s design. After that, I gave his design the atmosphere of a rigid child. I showed the second version of the proposal to Mr. Morimi, and he approved the proposal for film adaptation.

HN:  What kind of changes did you make to the design of Aoyama back then, specifically?

Hiroyasu Ishida: With Aoyama, I dug into the image of a clever boy and I shifted focus on behaviors, expressions and designs of a boy genius. Among all the changes I did to his design, I think the easiest to notice for you was the sharp eyes I gave him, which was within an inch of “Jitome”*4. Regarding the look of the main character for an animation project that I planned just before Penguin Highway has a gentle atmosphere and an image of a careless and boisterous child. My first version of Aoyama was similar in that design direction. I felt that the image of Aoyama changed to a more judicious boy in my second version of the proposal. I think Mr. Morimi understood the difference because the changes I made to Aoyama were quite clear.

*4: “Jitome” is a Japanese animation industry term for the shape of eyes that looks like it is always staring or glaring at something or someone. It is one of the major designs of eyes in Japanese animation, which is generally for characters who are mysterious, listless, and apathetic or looking down on other people.