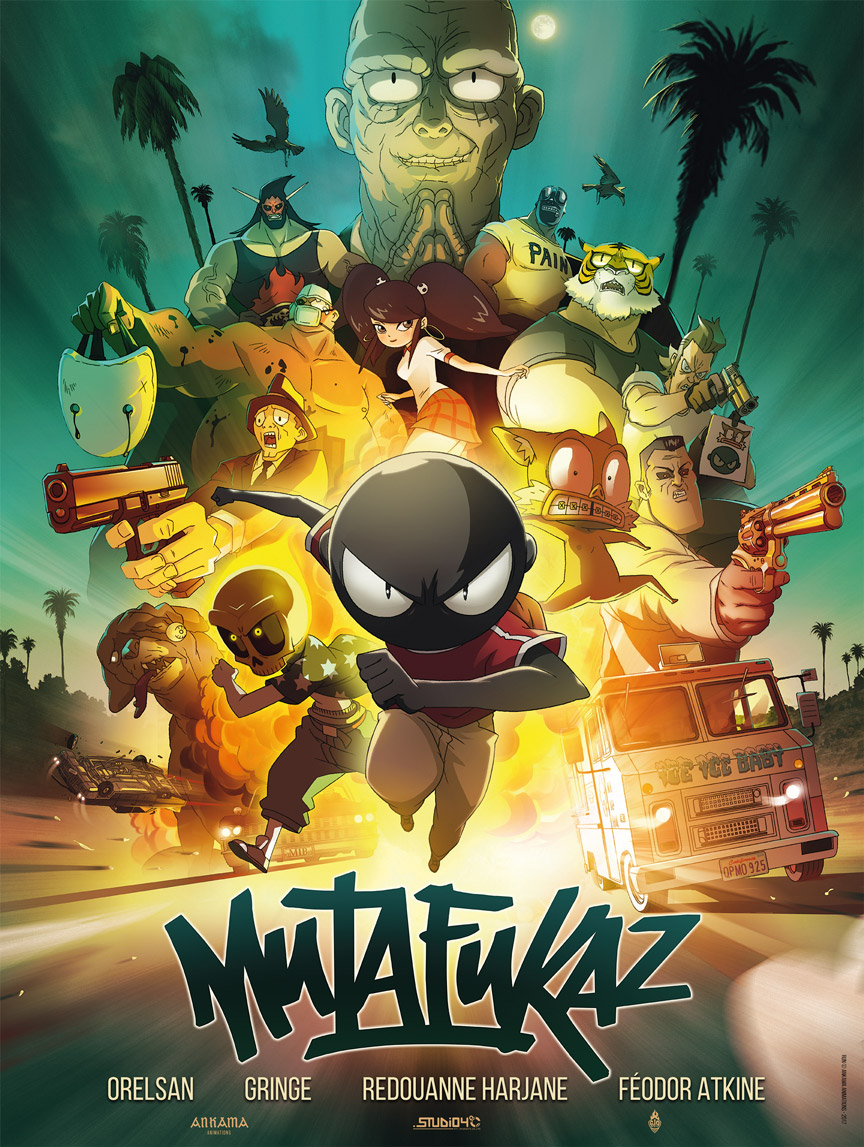 Angelino is just one of the thousands of deadbeats living in Dark Meat City, a ruthless megalopolis in sunny California. At day, he runs the streets of the city delivering pizzas; at night, he squats a seedy hotel room with his homie Vinz and an army of cockroaches that are now part of the family.

Following a scooter accident caused by the heavenly vision of Luna, a girl with jet-black hair, the young man starts experiencing violent headaches doubled with strange hallucinations. Hallucinations? Maybe not … Chased by men in black suits, Angelino has no doubts: he is a target. Why him? Following a terrifying manhunt, he is finally captured and learns the truth about his origins: he is half human and half Macho, a creature from the dark matter of the universe.

Will he join the ranks of those who secretly exploit the world’s resources … or choose another path?

Mutafukaz, an animated feature film based on a popular French comic series of the same name written by Guillaume Renard (also known as “RUN”), had its world premiere in Annecy, France on 13th June during the Annecy International Animated Film Festival 2017.

Mutafukaz is a film with a hard-core, high-adrenaline adventure for young adults and adults. Its good, tightly-plotted sci-fi story with its many dynamic action scenes encircles the unique universe enriched with the high-quality detailed background art.

Mutafukaz was co-produced by French company Ankama Animation and Japanese studio STUDIO4°C. Ankama is a French entertainment company consisting of Ankama Games, one of the leading game companies in France, which has very popular titles like Dofus and Wakfu, a comic publisher Ankama Éditions, and an animation studio Ankama Animations. STUDIO4°C is a prestigious Japanese animation studio which is well known globally for their high-quality feature films such as Mind Game (2004) and Tekkonkinkreet (2006).

We could have exclusive interviews with three key personnel of the film project, Anothony Roux, the producer, Guillaume “RUN” Renard, director, and Shojiro Nishimi, co-director. We are honored to deliver their special interviews in two parts. With this first part, we are happy to share the words of Anthony Roux, the producer of the film Mutafukaz and also one of the founders of Ankama. He talks about how the project started and teamed up with STUDIO4°C. 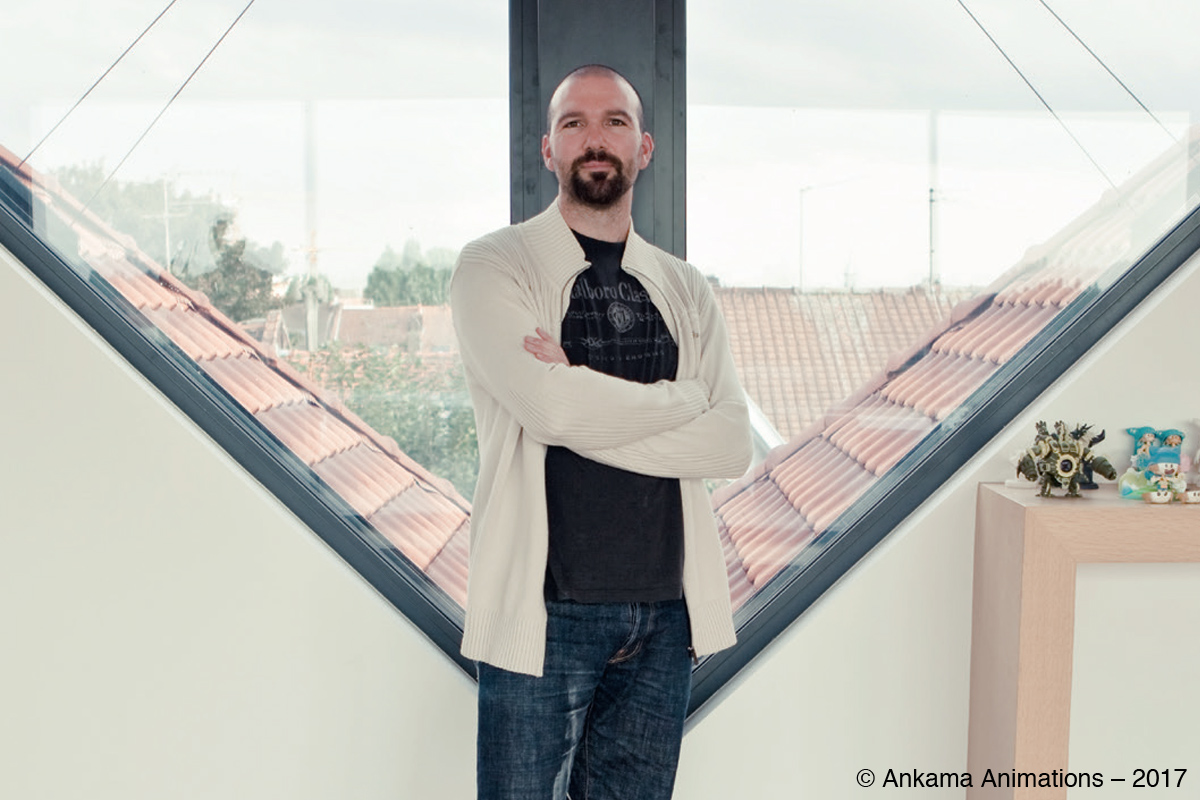 Animationweek (AW): How did this project start?

Anthony Roux (AR): We started thinking about the Mutafukaz film project around seven or eight years ago, but RUN has been developing this universe through the comic books for about fifteen years. Mutafukaz made an impression with its first paper publication, thanks to its groundbreaking graphics and highly “audiovisual” narration. It is one of the flagship universes of the company Ankama, and its qualities made it an ideal candidate to be turned into a full-length feature film. 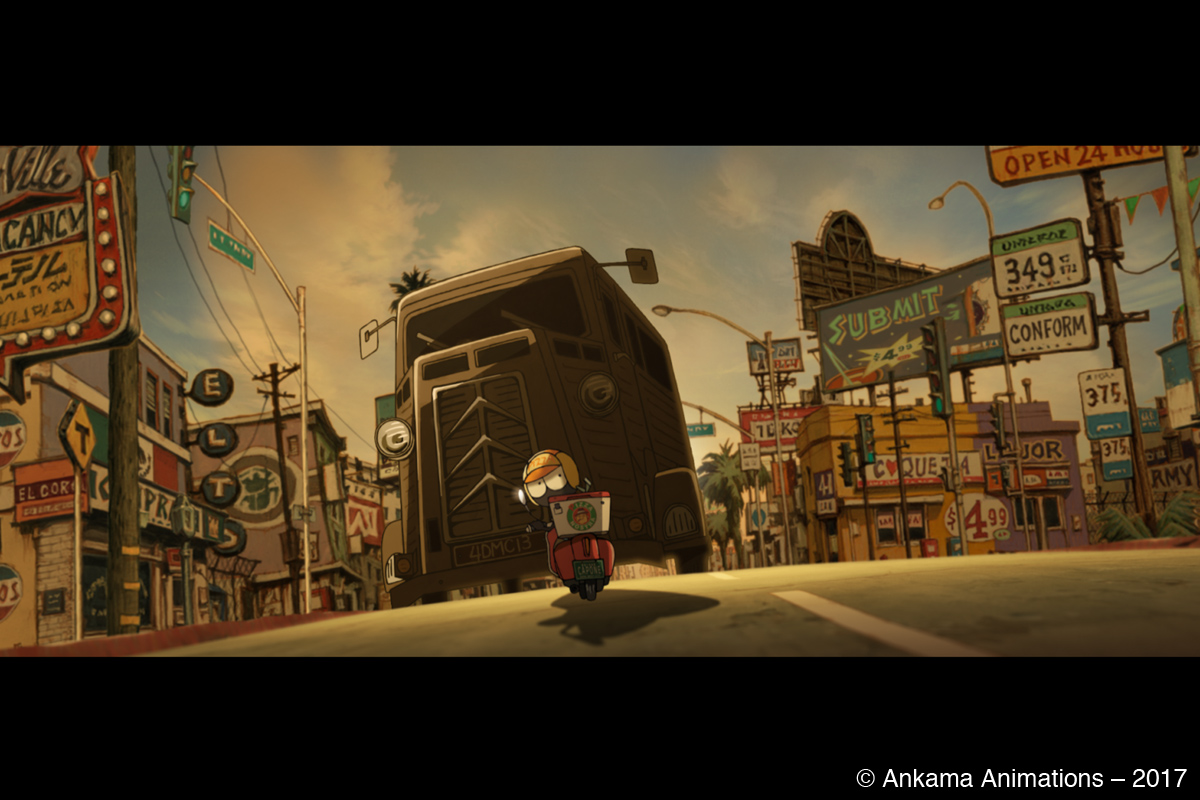 AW: Why and how did you decide to work with STUDIO4°C? What kind of benefits and strengths did you find through this collaboration?

AR: When we started discussing adapting Mutafukaz into a film with RUN, we instantly had STUDIO4°C in mind. In fact, we didn’t even have a plan B. I met Mrs. Tanaka*1 several times in order to present the project to her and, finally, it was the universe that convinced her artists. Being great fans of Mr. Nishimi*2 and Mr. Kimura*3, we absolutely wanted to work with them. Mrs. Tanaka made this possible, and now, we are especially proud of the work done by these two incredible artists.

*1 The founder and the president of STUDIO4°C, Eiko Tanaka.

*3 The artistic director (art board and background art direction) of Mutafukaz, Shinji Kimura.

AW: What is your favorite part of the film?

AR: Hmm… I like many scenes from the film, but one of them in particular makes me shiver. It’s the race on the motorway where Angelino gives it his all while driving an ice cream truck. The music, the rhythm, and all the little touches of humor hidden within the action make this sequence a unique experience; it’s worth watching the film, even if it’s just for this scene. 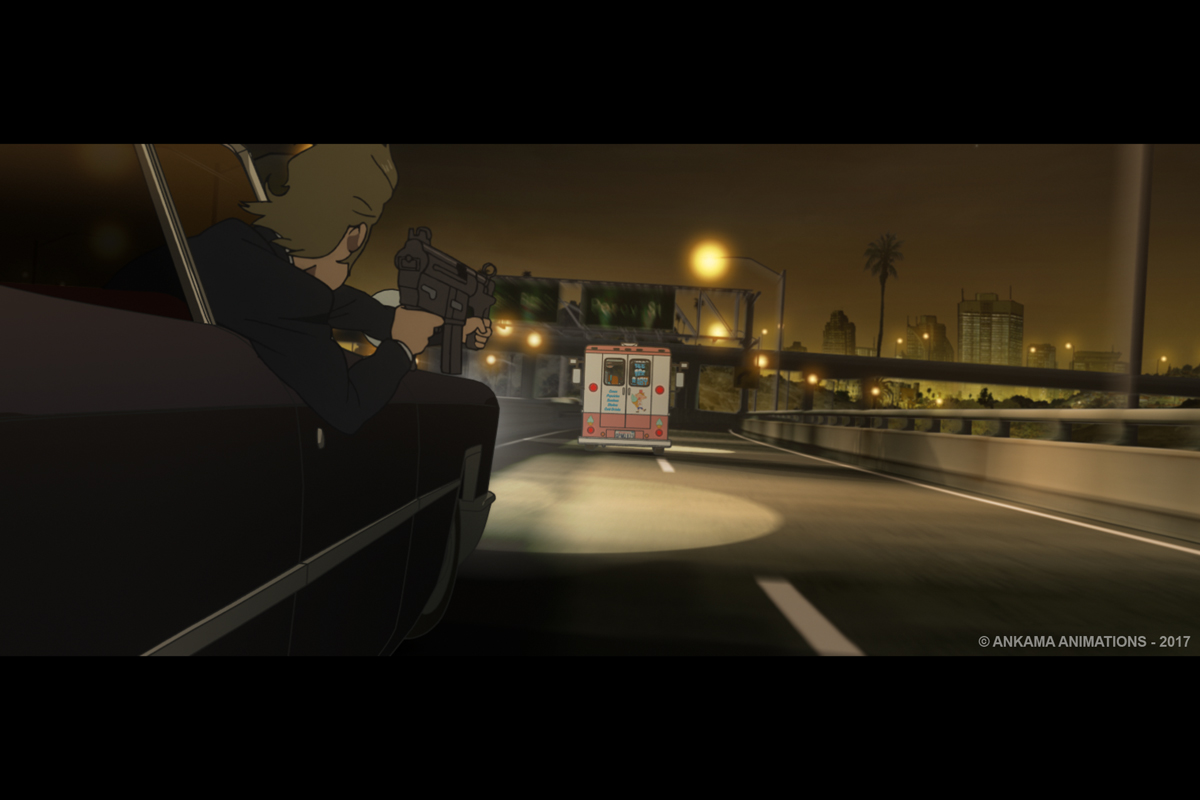