Minna and the dream builders 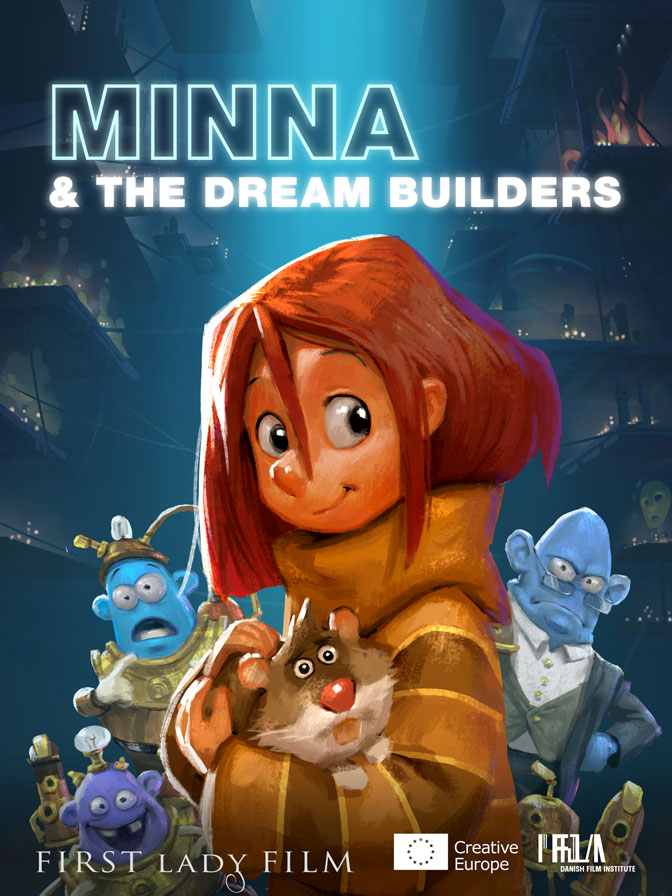 Minna’s life is turned upside down when her dad’s new fiancée, Helena, and her daughter Jenny move in. Her new stepsister, Jenny, turns out to be a mean terror and Minna is frustrated. She wants her gone! One night, Minna discovers a world behind her dreams, where dream builders create our dreams. Minna finds out that she can manipulate Jenny’s dreams. But interfering with the dreams has dire consequences, and Minna goes too far, so Jenny ends up in a coma. Everyone says it’s an accident, but Minna knows it’s her fault. Minna must enter the dream world one final time to face the living nightmare she has created, in order to save Jenny and her new family. Minna learns that the only way to make her dreams come true is to wake up. 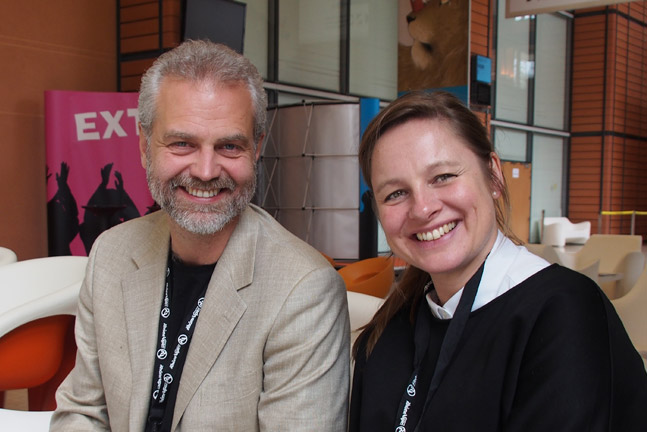 Minna and the Dream Builders is an original animated feature film that director Kim Hagen Jensen is developing with Nynne Selin Eidnes, a producer at First Lady Film in Denmark. It centres around a girl named Minna who discovers the dream builders behind the dreams. One day, Minna intervenes her stepsister’s dream, to pay her back for being mean to Minna, by controlling her dream, but goes so far that her stepsister slips into a coma. Minna has an adventure with the dream builders to save her stepsister and tries to unite her family again.

They held a workshop with the creators to work on a strong storyline for two weeks and they presented that it was effective at Cartoon Movie. We asked Kim Hagen Jensen, the director, and Nynne Selin Eidnes, the producer, about the workshop and the film in development.

Development of a storyline

Animationweek (AW): What did inspire you to come up with the initial idea of the story?

Kim Hagen Jensen (KJ): The idea for the whole story actually came from my experience. It was a strange dream experience to go behind the dream. I used this for the inspiration of the story.

AW: You mentioned that you organized a workshop. How was the workshop?

KJ: In the beginning, I worked very closely with several scriptwriters. I conveyed my ideas to discuss them but we couldn’t solve the story. The shifts between the different realities were difficult to get to work. After having worked on the scripts with two scriptwriters for a long time, I think it was over a year and a half, we hired a new third scriptwriter, but still something was not right. This is when we decided to hold a workshop to put together some artists, directors, and writers in a room for two weeks. We got a grant for the workshop.

We worked eight hours per day for two weeks just discussing about the story. We went through all the different problems and solved all of them, really! It was very difficult and hard but we got a clear idea of where we want to go with everything.

Originally it was a fantasy story about a dream universe. It now became a story about a girl and how she could use dreams to solve her problem. After this workshop, the scriptwriter could sit down and have the first draft in three weeks with almost no corrections. This is because all the work from the workshop made it clear for him. 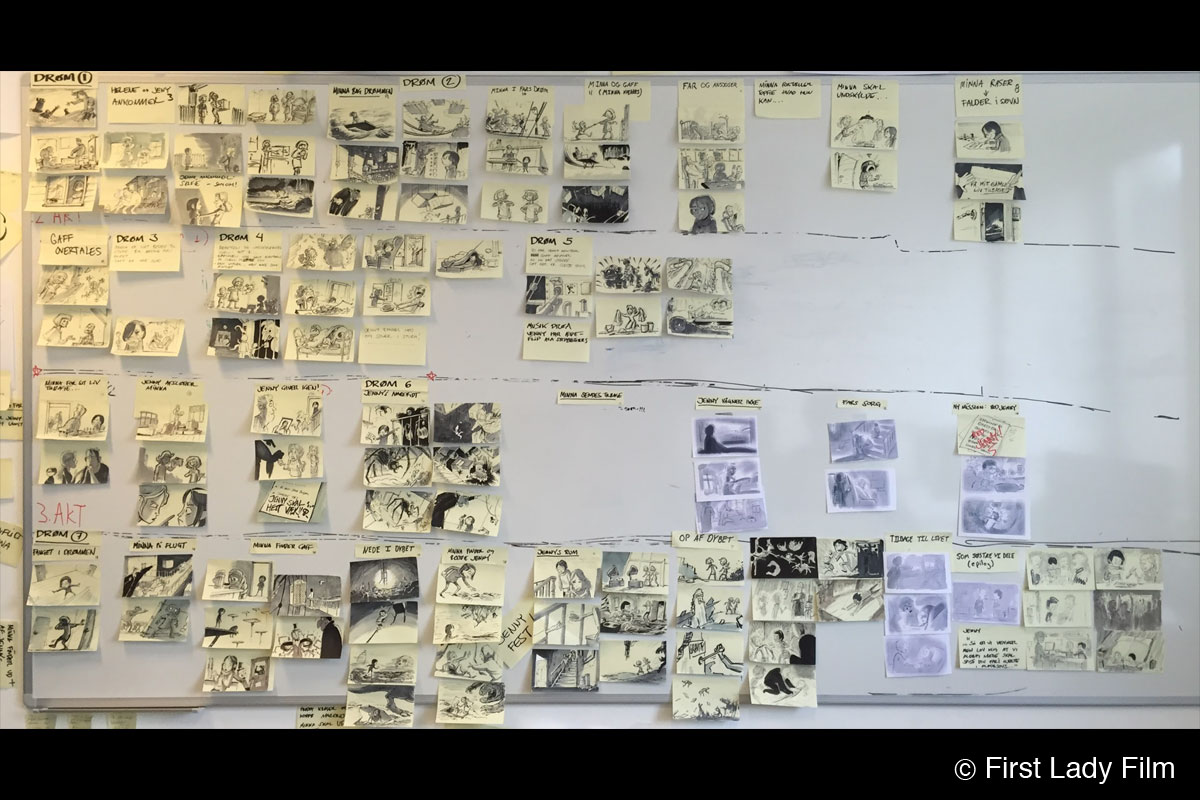 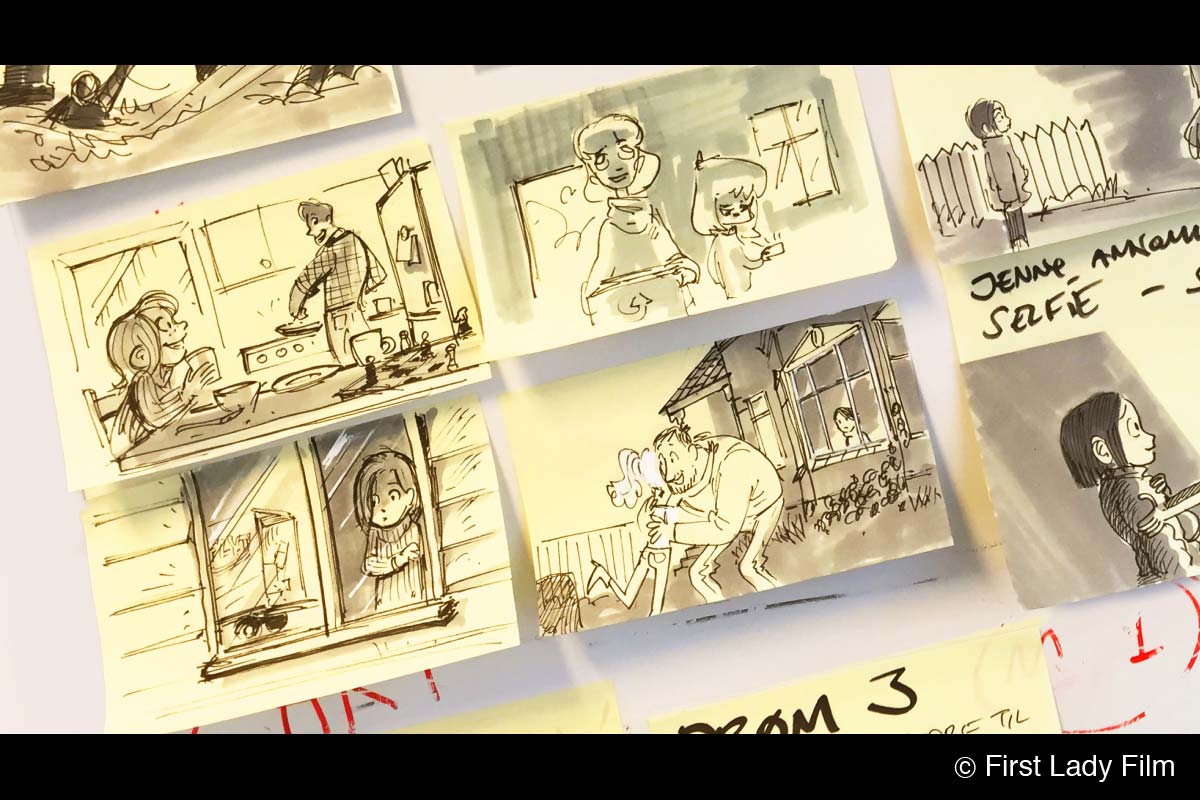 AW: Was it a different approach from the way you usually work?

Nynne Selin Eidnes (NE): Actually, I have been doing films before that and we used workshops and knew that it works. To tell you the truth, this is something we learned from Pixar. We watched all the documentaries and read books on how they do it. So we said that we wanted to try a similar style. Obviously they have much more money and can put people in a room for a year, but we could put people in a room only for two weeks. Anyway, it is a really good way to develop a story because we have a lot of good people in a room and you can immediately talk about it instead of one person sitting, writing, and thinking ‘Woah, how can I resolve this? How could solve that?’ People in a room were also animation directors who have done their own feature films and knew what sort of problems that could be involved. We also had storyboard artists who have done good concept art work for an animated film and they could also say what works and what doesn’t. I think it’s the only way to develop animation.

KJ: Before the workshop the story just did not work. I think we had fourteen different treatments. It wasn’t working at all. I was almost about to give up before the workshop. The workshop made all the difference. We used a lot of ideas that were in the previous drafts so all the work we did was not in vain, so to speak. In the workshop we took a lot of ideas and remodelled to make it all work together. It’s a very nice way. We recommend this way of working to everybody.

The process of visualization

AW: I suppose that dream is a difficult subject to animate, but you came up with great visuals. Did the workshop help or you have images in mind from the beginning?

KJ: Partly the workshop helped but I saw the dream in my head. It was not so difficult to visualise it.

NE: I think that dreams can be thought of like a theatre play being built every night. This idea seems to be right because when you dream you focus on one thing. For example, when you see a phone in your dream, the only thing you can see is the phone and you can’t see anything else. This is the same sort of visual effect that you see in a theatre. In a theatre, a phone could be represented as a huge phone. It’s the same way of exaggeration to think about when you visualise a dream. The idea of these kind of visuals is so clear from the beginning and we never change that. At least one point was very sure. 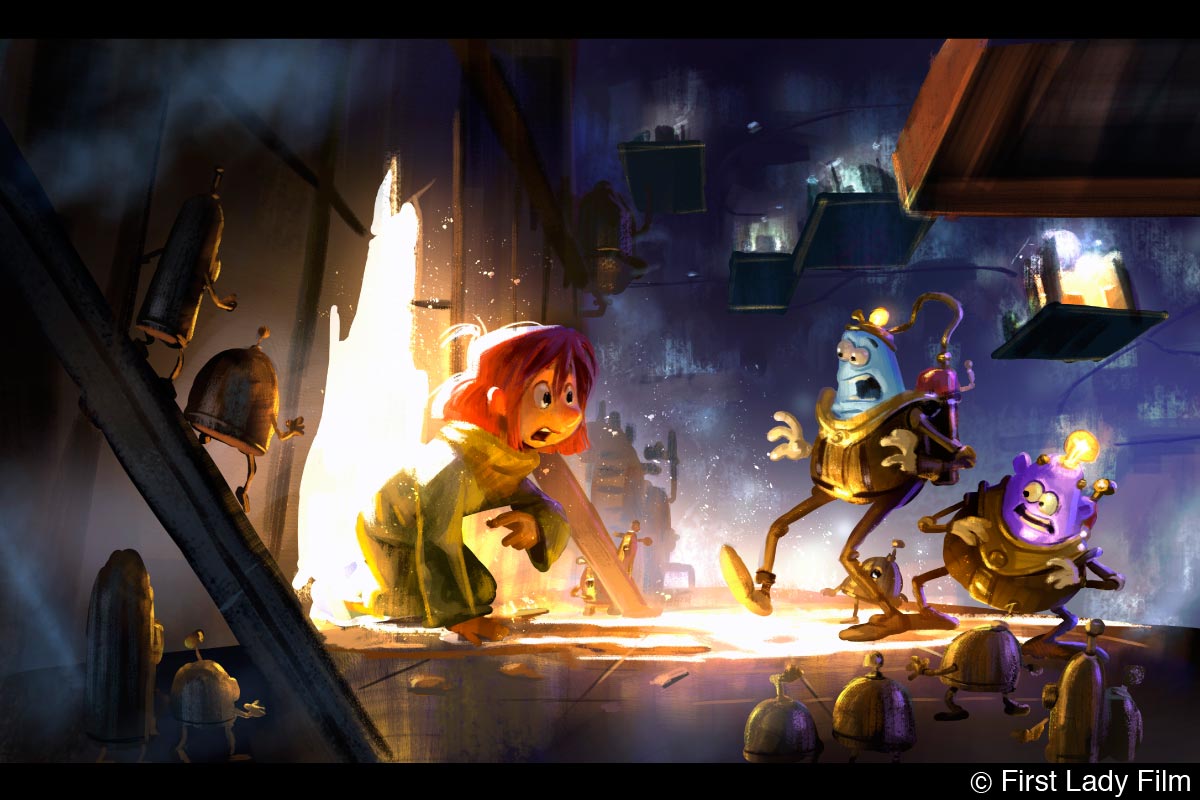 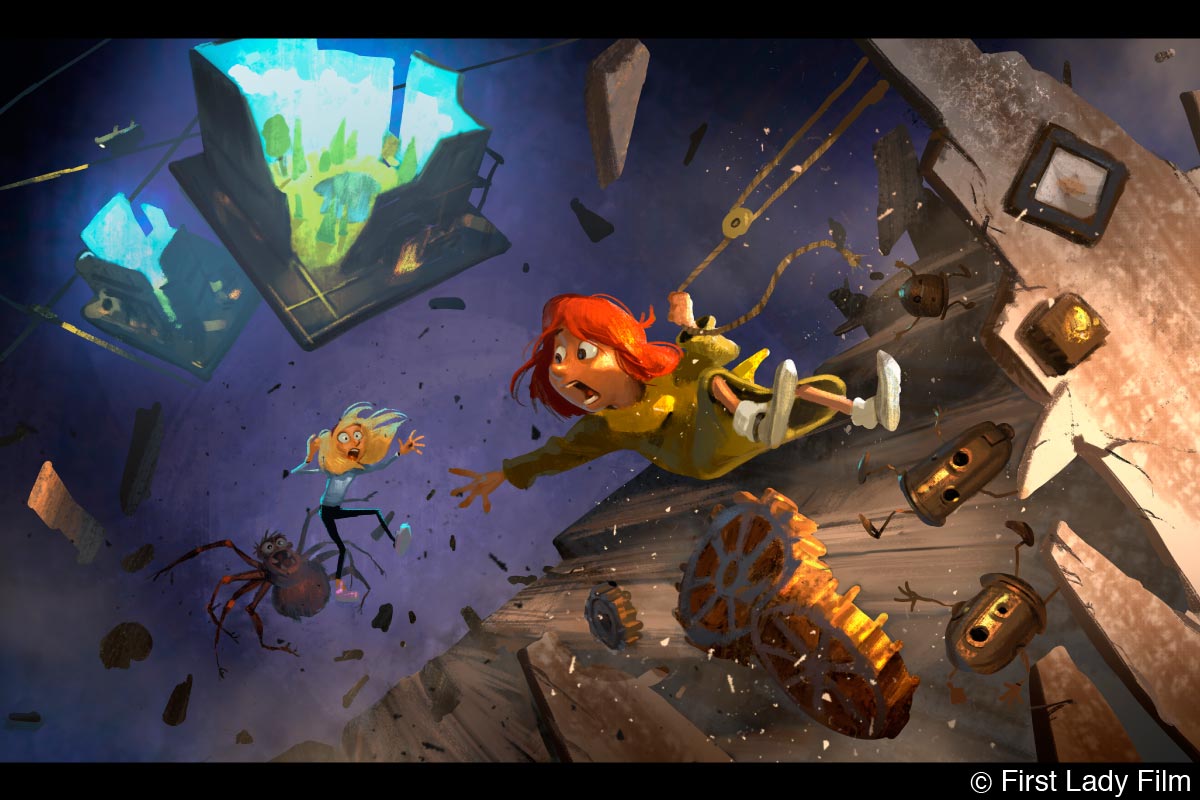 AW: How did you develop your visuals?

KJ: I had try-outs with a lot of different artists and am actually using a bit of each of what they have done. I’m an artist myself so I took the best part of each and mixed together the drawings. Then, we sent it to a really good concept artist who painted on top of my drawings. It is a mixture of ten people’s artwork in a way.

AW: I see. The visuals are really cute but very original and artistic. I wondered how you visualized them.

KJ: It took a lot of works. It has a lot of different artists’ try-outs for how to solve the visuals and the story. Slowly but surely we reached to the place where we are now. 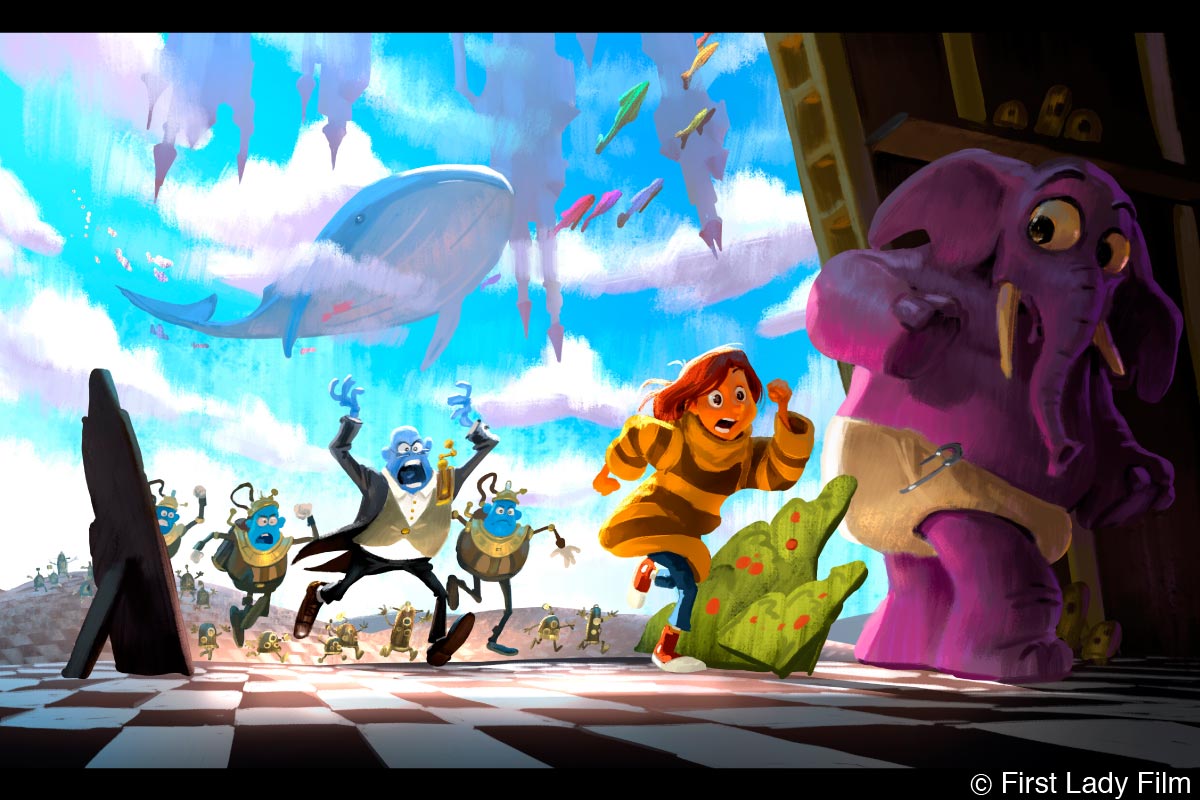 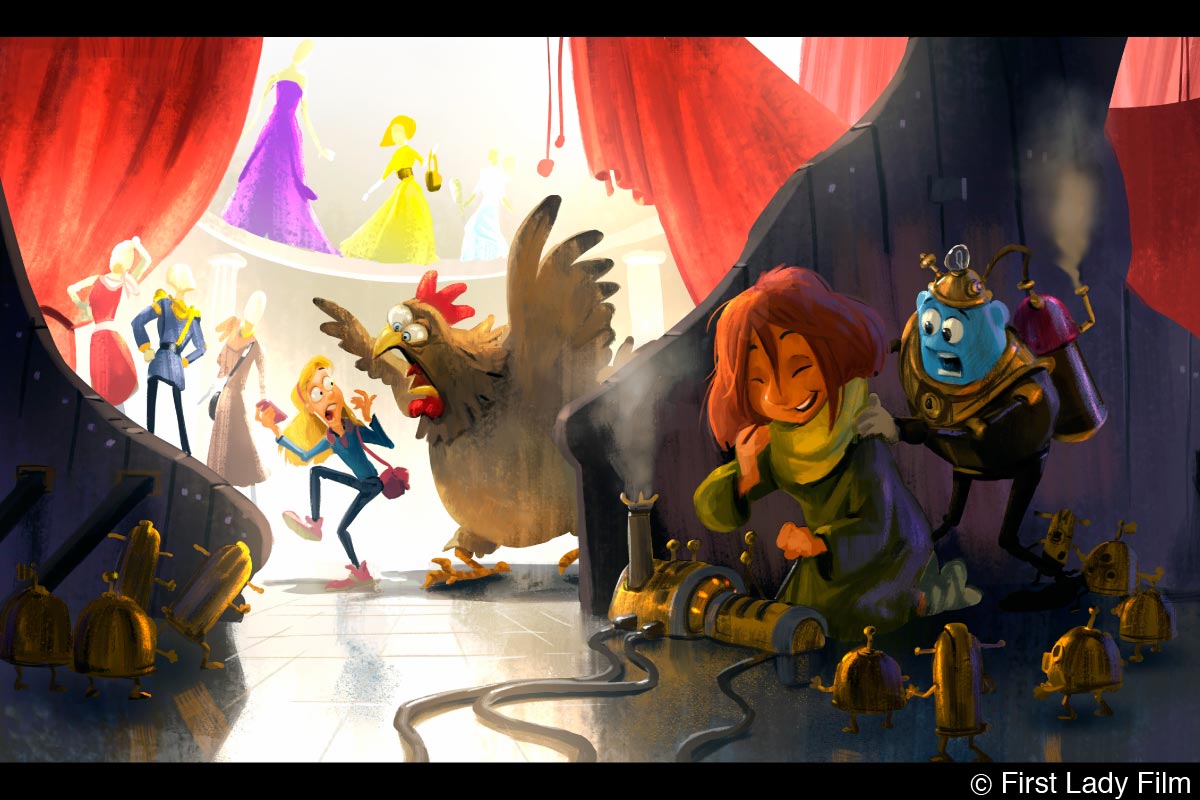 “Diving into the characters”

AW: How were you able to develop a story that every family member can relate to? Did you have families as a target audience from the beginning?

KJ: It came up in the workshop. We started asking more and more questions about characters. We started to think about what their lives were.

At the beginning, it was a girl in a school who is teasing Minna. Then, we thought what if she was her own sister. We worked for a while in the workshop with the idea that they were sisters. It was difficult to have them as real enemies because she still loves her sister in a way. The idea evolved from there to what if they are stepsisters, not real sisters.

Almost everybody in the room know someone who divorced. We spent two or three days talking about their experiences from children whom we knew and who try to manage their lives from a divorce. We just felt that we are talking about something strong and this is really interesting. The idea was developed in the workshop and did not have this idea before that. 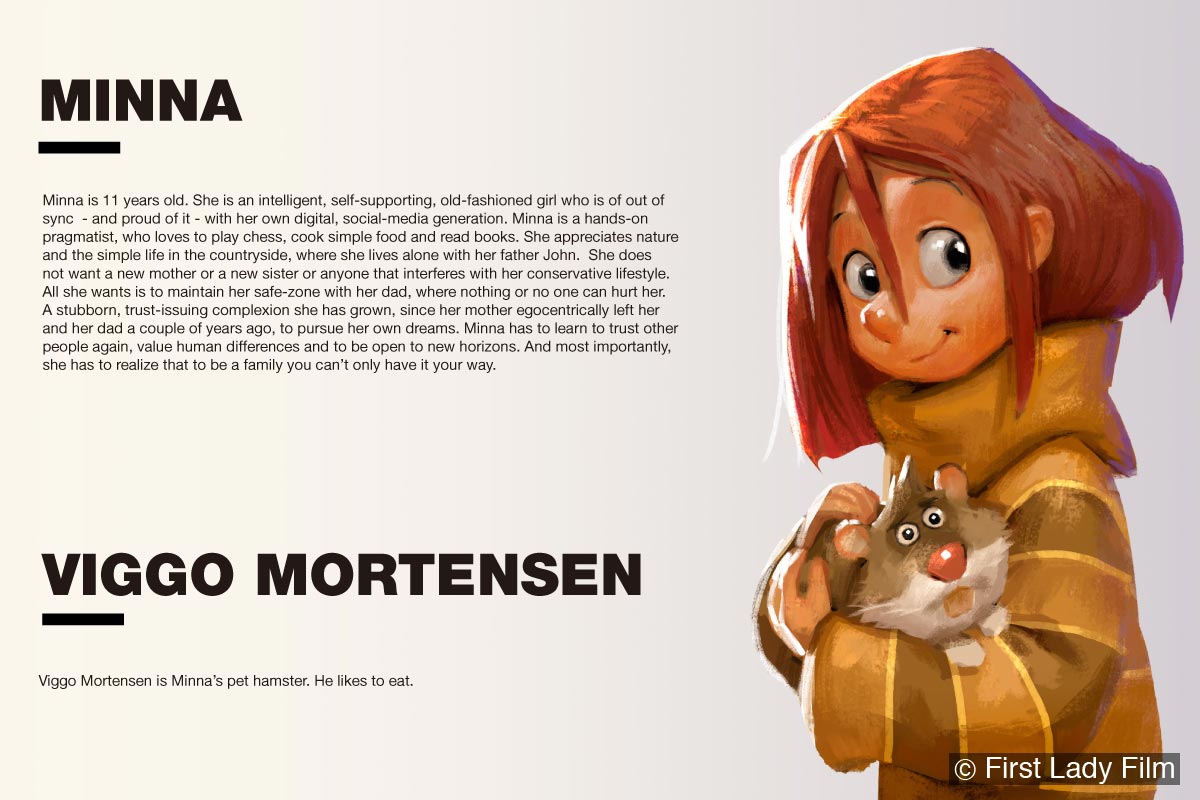 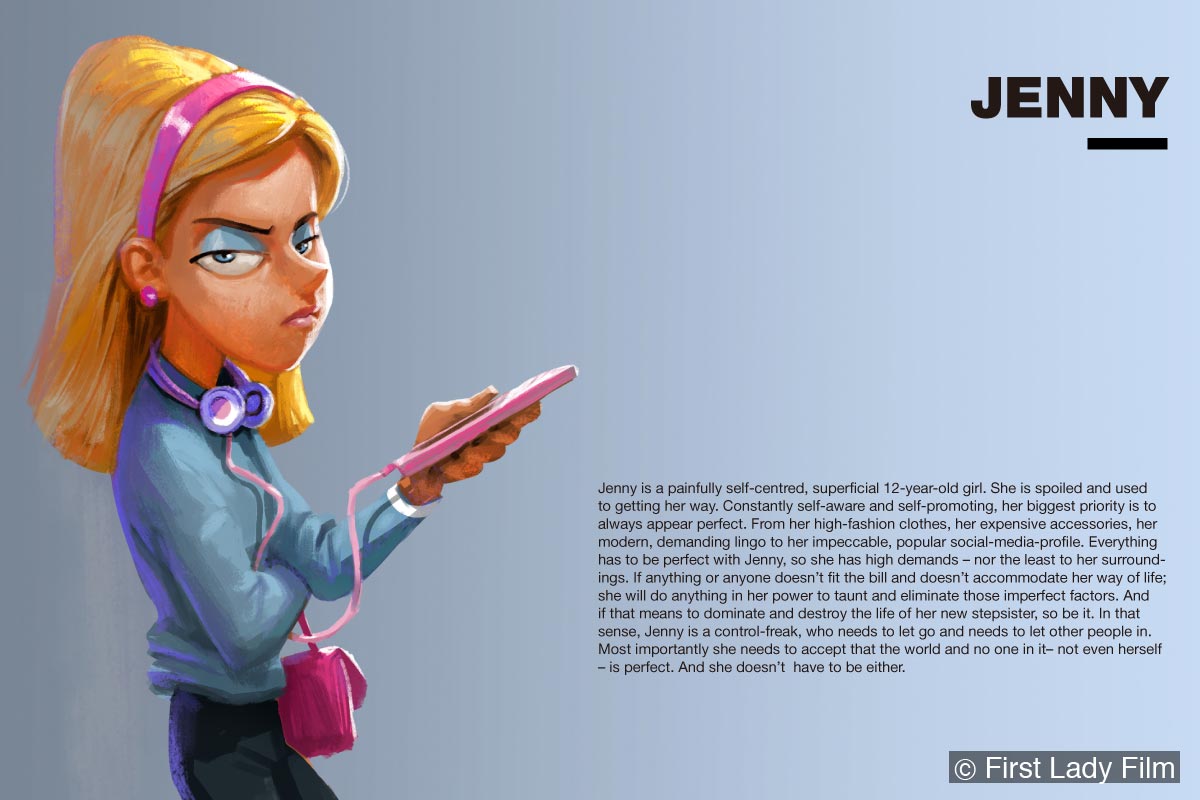 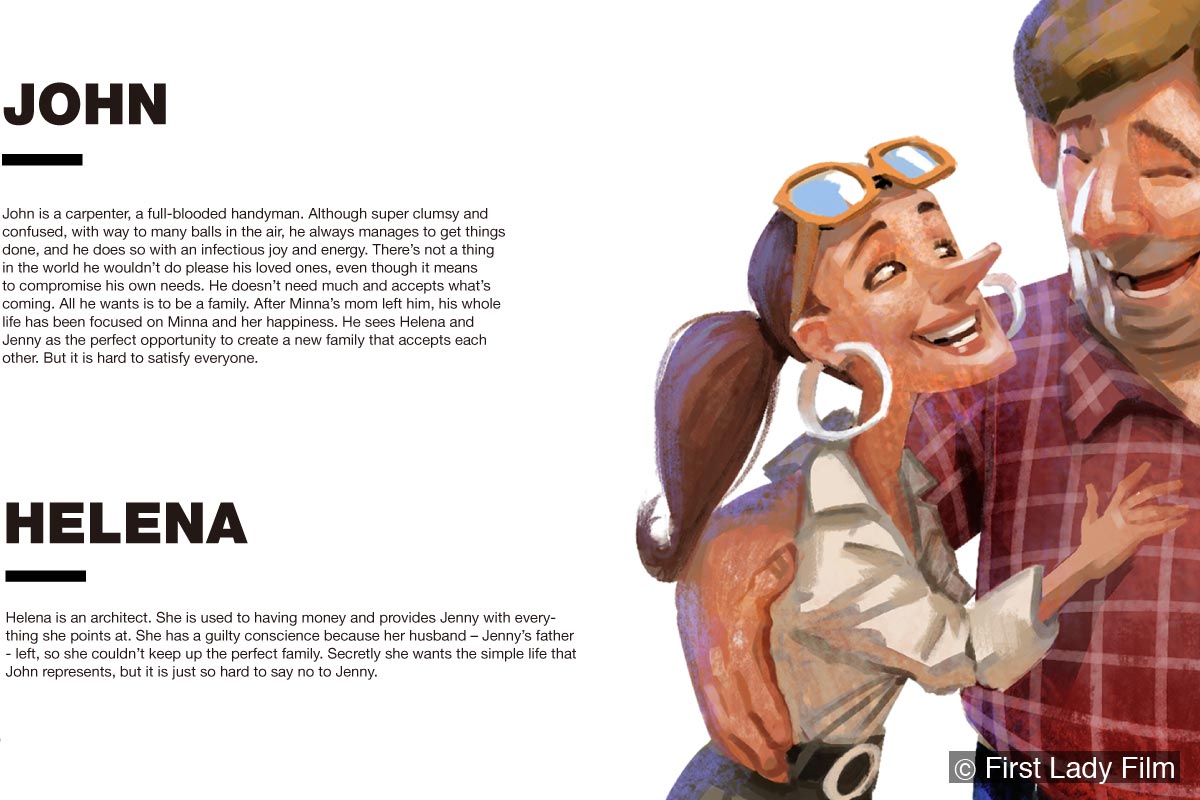 AW: It naturally appeared in the discussion.

KJ: The idea from the beginning was Minna. She had an enemy that she tried to win over in a bad way. Suddenly during the discussion, we realized that the best enemy must be your stepsister. It’s developed by diving into the characters. That’s all it was about. 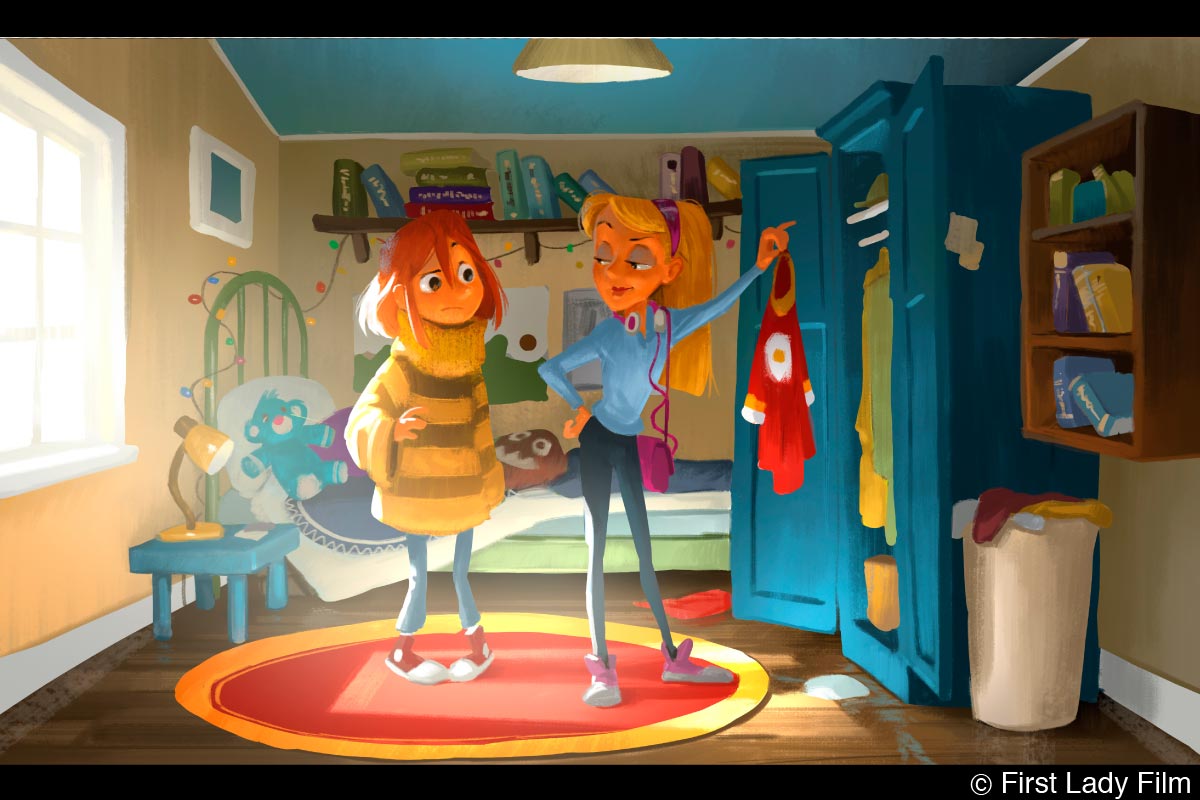 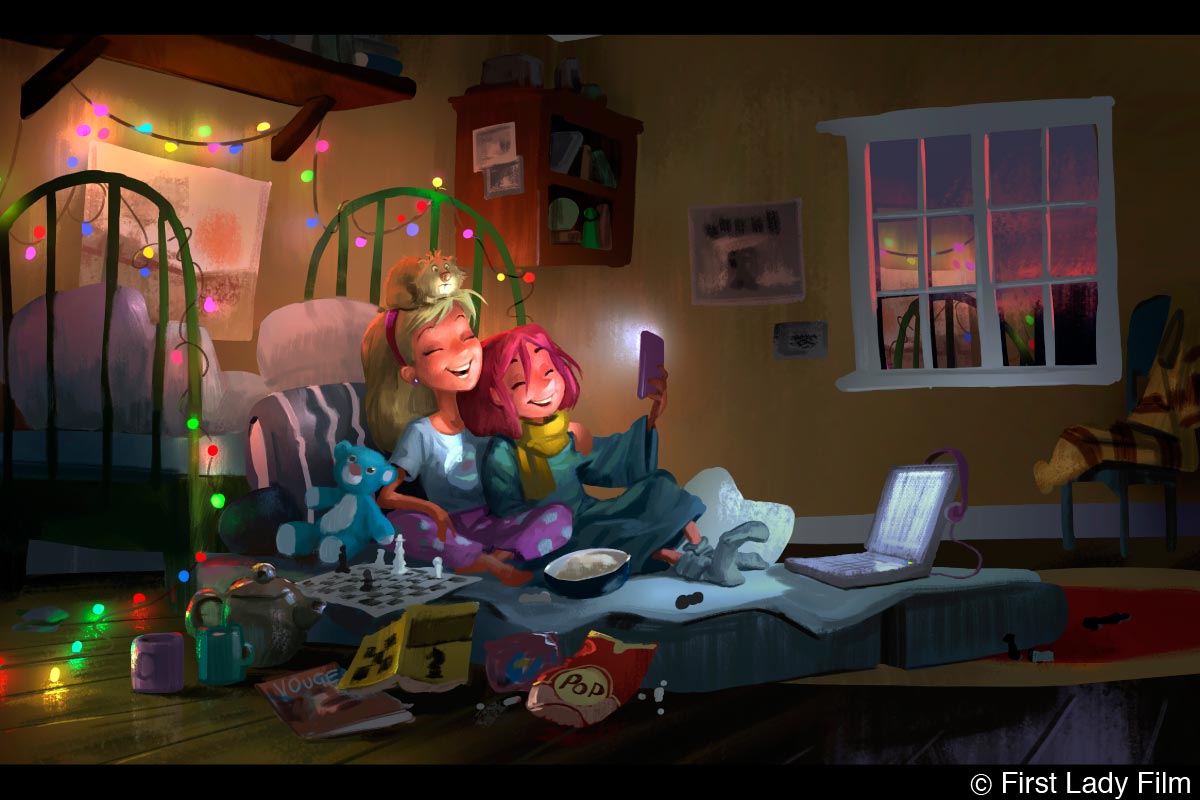 KJ: We realized that this is strong but at the same time we had to make some painful decisions. There are a lot of strange things happening in a dream world that was visually amazing and cool so it was really hard to take them out. But, we had to do it because the stepsister’s story needed room and the story was so strong. It was really strange to take a lot of strong visuals out of the story and replace it with strong things which are related to the characters. It was very challenging. I am a very visual person and it was very tough for me to take out epic and amazing images. Very tough.

AW: Especially if you saw it in your dream. It must be hard to take out.

KJ: Exactly. We realized that you can make a beautiful film but if you don’t have characters that you can relate to then it’s just beautiful images. Feelings become so much more interesting. 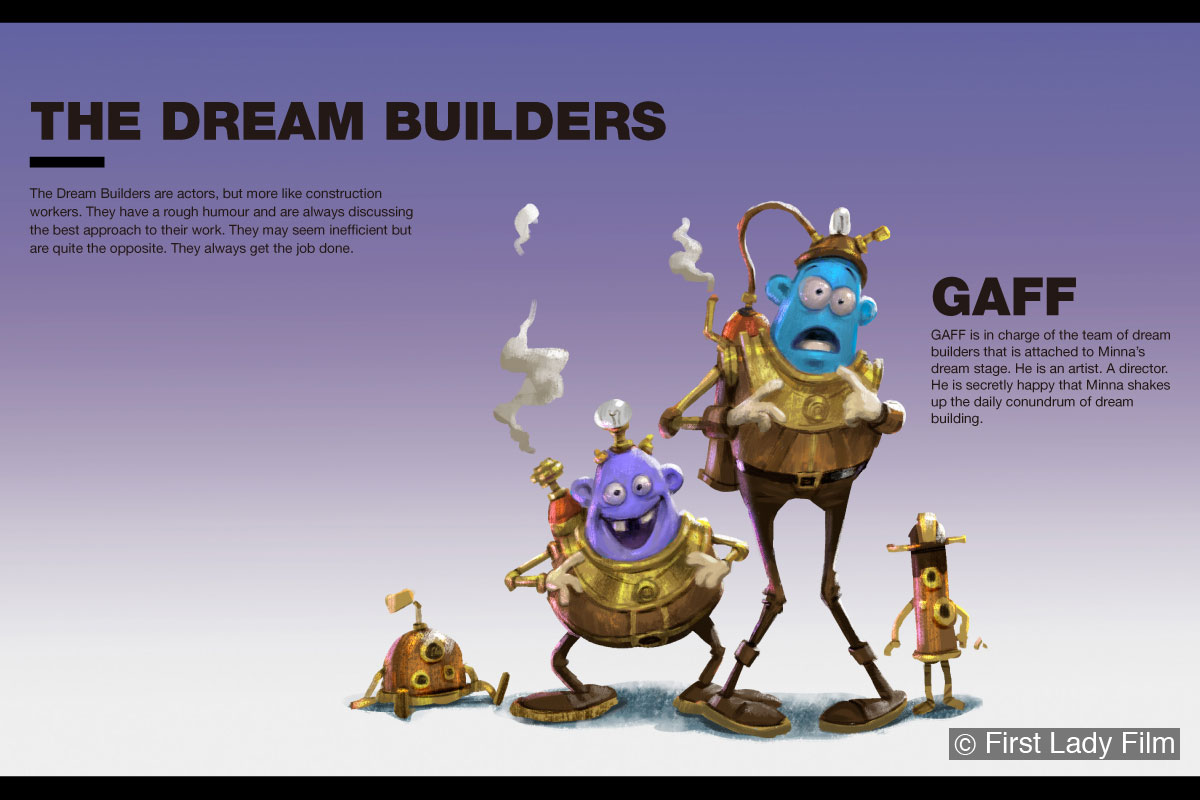 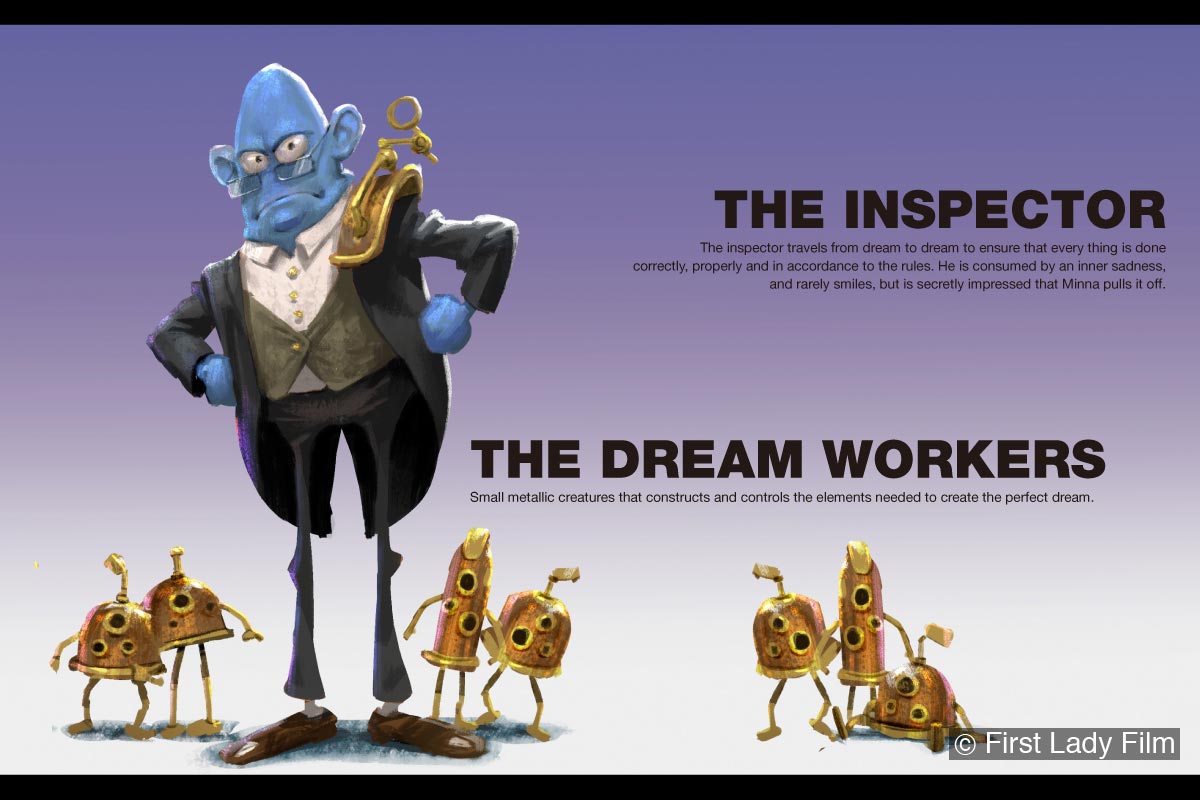 A film that everyone can relate to

Minna and the dream builders has elements that every family member can enjoy and relate to. It would give you time to think back what family is and children could enjoy not only the story but also the world of dreambuilders who create their dreams. They used dreams as a unique way to access the characters’ inner lives as Jensen presented it at Cartoon Movie. He tried to create a story that is fascinating and enjoyable to watch but also touches something that many children face today.

They now have a full script, concept book, teaser trailer and almost ready to move into production. They have a co-production partner Petter Lindblad at Snowcloud in Sweden. It is aiming to release the film in the Fall 2018.