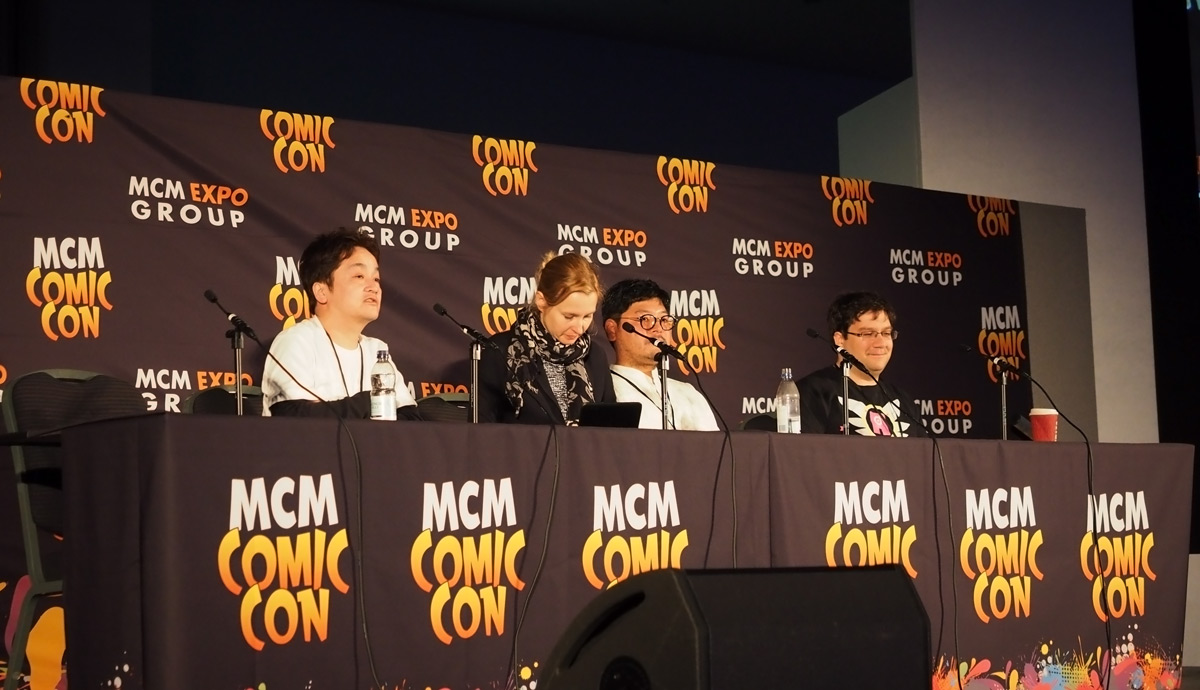 London Comic Con was held in London, UK with over 133,000 visitors between 27th and 29th May 2016. On 28th May, the third episode of Gundam The Origin, “Dawn of Rebellion”, had a special premiere screening and panel session with Osamu Taniguchi (Producer) and Mika Akitaka (mechanical designer), followed by a Q&A session. A lot of fans were there, some of them were in the costumes of Gundam characters, and the air of excitement filled the place. We are happy to report valuable stories of Taniguchi and Akitaka from the panel together with our special interview.

Mobile Suit Gundam is an animated TV series, produced by Sunrise and directed by Yoshuyuki Tomino, which premiered in Japan in 1979. It is a well thought through human drama, set in a time of war after the period when humanity successfully made it into space. It attempted to be based on real science. It is a science fiction depicting military amour called “Mobile suits”, which are gigantic humanoid robots that humans can ride and operate. In the early 1980s, it became a huge social phenomenon in Japan and set a gold standard in Japanese robot animations.

Since the airing of Mobile Suit Gundam, the franchise began. Titles with “Gundam” have appeared in the form of multiple television series and OVAs, and films which have a different universe and setting, but a giant robot named “Gundam” appears in all the series and all of these gain the popularity in wider generations from children to adults in Japan. All the animated series are called “Gundam series”, it is one of the top animation franchise in the Japanese animation industry. The franchise has also led to the creation of one of the biggest toy franchises of model kits and maintains its popularity for more than 30 years.

Mobile Suit Gundam (1979) is recognized as a timeless masterpiece within and outside of Japan and is alternatively called “First Gundam”. The First Gundam sets in a fictional universe and depicts the independence war between the Principality of Zeon and the Earth Federation, known as the “One Year War”. The story centers on Char Aznable, an ace-pilot of Zeon, and Amuro Ray, a pilot of the Gundam in the army of the Earth Federation.

Special report of a panel from London Comic Con

Following the premiere screening of Gundam The Origin III, the panel kicked off with brief introductions of Osamu Taniguchi and Mika Akitaka.

Taniguchi introduced the animated TV series, Future boy Conan (1978), directed by Hayao Miyazaki, as his reason to come to animation industry. He started his career in TMS entertainment and moved to Sunrise to become a producer of Gundam The Origin.

Akitaka said that his favourite animation was the Gundam series and this influenced him to work for animation industry. His hobby includes assembling model kits and collecting toys such as Star Wars, Transformers and Iron Man. 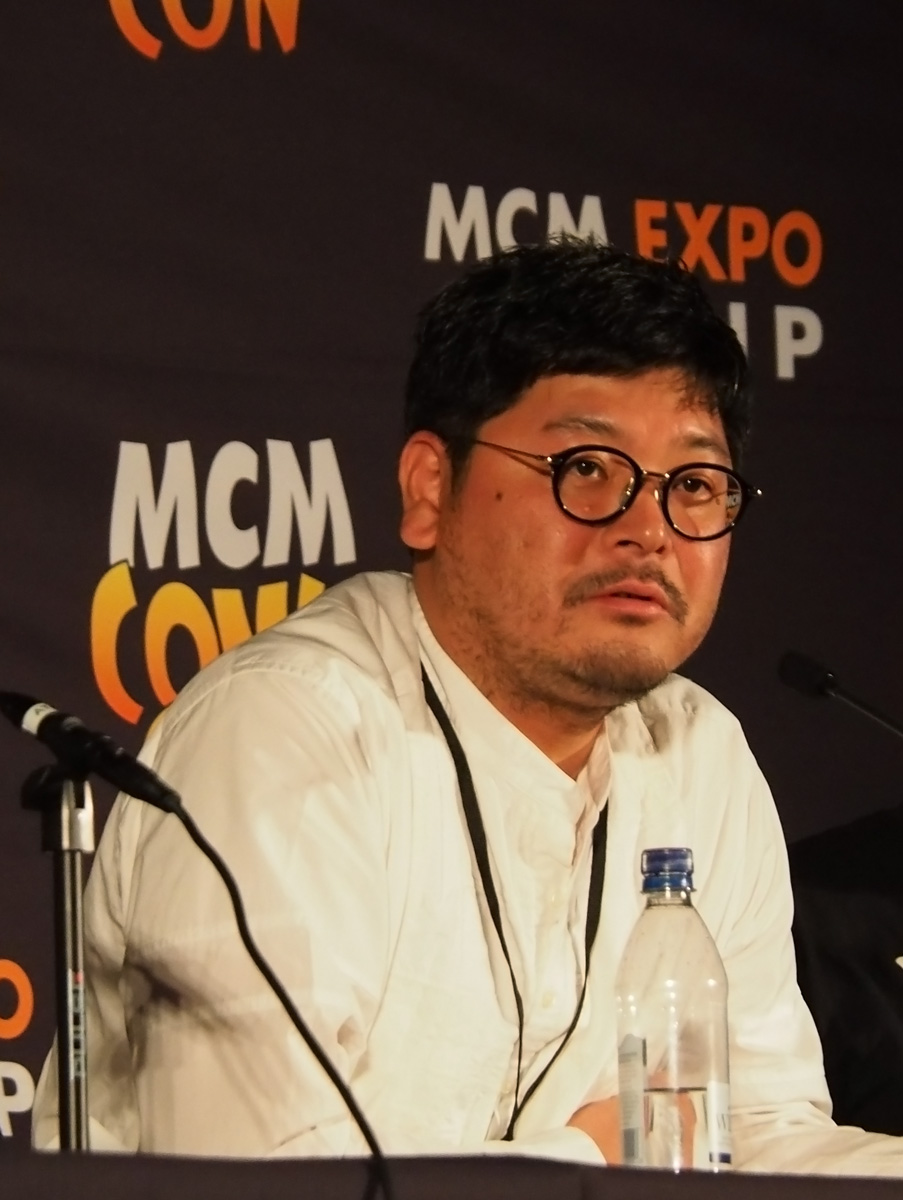 Taniguchi moved on to explain the overview of Gundam The Origin.

Gundam The Origin is the animated series based on the same-titled comic series written by Yoshikazu Yasuhiko. The comics by Yasuhiko include new episodes that depict backgrounds of Char Aznable and his young sister Sayla Mass that were not fully covered in the First Gundam. Yasuhiko made his own interpretation of the original First Gundam and reflected it into the comics. Kunio Okawara, one of the mechanical designers of the First Gundam, is taking part of this comic project.

Animation production of Gundam The Origin has begun after the completion of the comic series. The project welcomes the comic author Yasuhiko, who is a former animator, as a general director, over 25 years since his last animation project. Yoshuyuki Tomino, the director of the First Gundam, is not participating in this project. Yet, this project has participations from Yasuhiko and Okawara, who could be said as the birth parents of the First Gundam. In Japan, screening events of the Gundam The Origin series has started since last year.

Yasuhiko, who is the comic artist of the original series and the director of this project, was born on 9 December in 1947 from Hokaido in Japan. He started his animation career at Mushi Production. The well-known works, which he directed include Crusher Joe (1983) and Venus Wars (1989). He still actively works on two comic titles and Arion is one of his well-known titles. There are many creators who have influences from his works in the Japanese animation industry.

There are three mechanical designers who have taken part in Gundam The Origin. 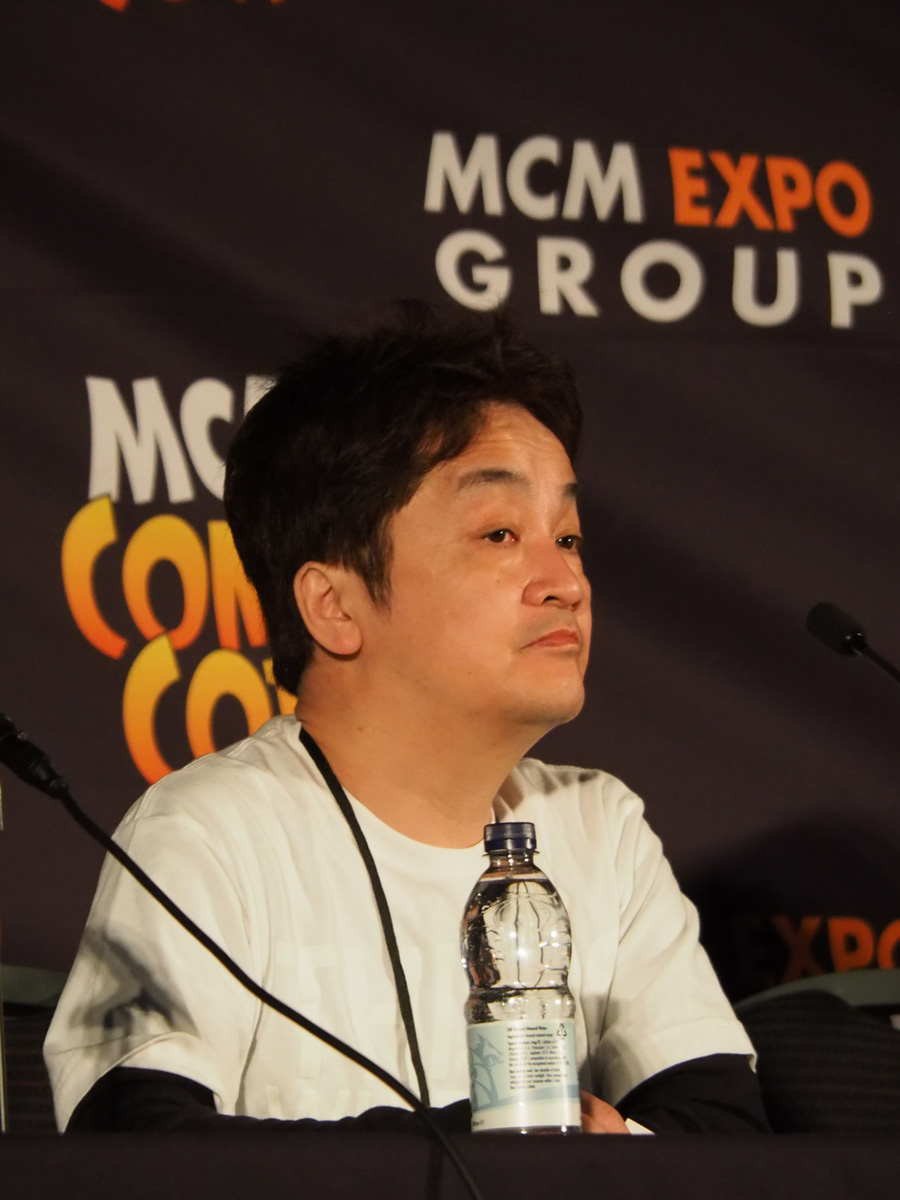 Next, Mika Akitaka gave an explanation how mechanics are designed for the Gundam The Origin.

Image 1 shows a rough design before the final design. If you look at carefully, there are differences in a detail between the left and the right illustrations. There are subtle differences in the design of the same battle-ship in each frame in the comics written by Yasuhiko, so Akitaka took all these differences into consideration to propose the design for the animated series.

In the next step, a clean-up process began after the design has been checked and approved by General Director Yasuhiko and Director Takashi Imanishi (image 2). After this, there could be additional work required to hand the 2D drawings to a 3D modeler due to the fact that most of the mechanics in Gundam The Origin are drawn in 3DCG.

Akitaka continued to explain the design procedure of Gundam.

The design at the far left in the image 4 is the line art of a new Gundam drawn by Katoki. Second to the left shows a coloring test. There are certain rules for the colour of Gundam, but there are delicate differences in colour reflecting the time when each Gundam was designed. For example, the colour of the V antenna (on Gundam’s forehead) used to be either white or yellow, and in the First Gundam, joints such as the elbow, knees and wrists are originally white. The perception has changed and now a metal colour is more preferred for Gundam’s joints over a period of the Gundam franchise. The third image from the left shows the colour scheme for the animation, decided by Nagisa Abe who is responsible for the colour scheme. Far right image is the 3D model that the 3D team created. The final look does not differ so much from the hand-drawn Gundam.

Development of the Plastic Models

Taniguchi introduced that the Gundum franchise mainly consists of animation (films and TV series) and plastic models series known as “Gunpla”. The first Gunpla was released for sale in July 1980. Since then, over 450 millions of them has been sold to date. Their line up has more than 1,000 types. Akitaka introduced a part of the Gunpla series from the Gundam The Origin series (image 5).

The top left: RX-78-02 Gundam. It is developed as the main merchandise of Gundam The Origin. It is in a line up called the “Master Grade model” plastic model series and its scale is at 1/100th of the actual size.

The top middle: MS-05 Zaku I (production team calls it “old Zaku”). It will appear in the Battle of Loum in episode 3.

The top right: YMS-07B-0 Prototype Gouf. It is the prototype of Gouf, which appears in the animation Gundam The Origin.

Lower left: YMS-08B Dom test type. This will not appear in the animated series of Gundam The Origin. It is designed based on the side story project called MSD (Mobile Suit Discovery), which follows the development history of mobile suits in the story of Gundam The Origin.

Lower right: MS-06R high mobility Zaku II. Zaku appears as the main mobile suit of the enemy in the First Gundam. Black Tri-Stars, a team comprised of three rival characters to Char whose names are Gaia, Ortega and Mash, would get on board in this gray coloring Zaku.

According to Taniguchi’s explanation, the First Gundam started to air 37 years ago in Japan. The growth of its popularity gave a synergy effect to the Gunpla business, and new Gunplas have been merchandised next to one another. Characteristics of Gunpla are the possibility of playing with them by taking it in hand and freely changing the pose, designed for children to assemble easily, and the ability to paint your own colors to design your own model in a straightforward fashion. Taniguchi analyzed that these are the possible reasons that Gunpla culture flourished in Japan. Gunpla are now sold in 13 different countries worldwide, and is very popular in Asia and its distribution has started in France.

Highlights of episode 3 and 4

Next, Taniguchi introduced the key points of the episode 3 and 4 of Gundam The Origin.

Taniguchi listed highlights of episode 3. Those are the first appearance of Garma Zabi, the popular character from the First Gundam, and his encounter with Char, and can have a sneak-preview of the mobile suits under development. During the production process of episode 3, they reflected the importance of a character who hands over an iconic mask to Char, which he has worn in the First Gundam. They asked Katsuyuki Sumisawa, a script writer, to create the character. And then a new character named Lino Fernandez, who does not appear in the comics, was born and he passes the mask to Char. Taniguchi said that this is another highlight of this episode. In due course, the Principality of Zeon gains independence from the Earth Federation. A catalyst to this independence war is the “Dawn Rebellion”, which is told in episode 3. Taniguchi urged the audience to see the battle among the younger generations such as Char and Garma.

Taniguchi listed the first battle of Mobile Suits in the series Gundam The Origin as a highlight of episode 4 “Eve of Destiny”. It is the first mobile suit battle in the universe of Gundam. In the battle, 5 pilots, who are Char, Ramba Ral and three ace pilots, later called Black Tri-Stars, fight together against the Earth Federation’s mobile weapon named the Guncanon. In episode 4, you can expect to see the familiar faces from the First Gundam such as Lalah Sune, Fraw Bow, Hayato Kobayashi, and Kai Shiden. Taniguchi wants viewers to look for these characters as well. They are also trying to re-create the scene of the destructive colony drop to Earth, which cannot be depicted fully in the First Gundam.