In recent years, the number of films based on novels, graphic novels, and comics are increasing due to the cross-media development strategy. American cartoonist Jeff Kinney’s famous children book series Diary of a Wimpy Kid has been transitioning into live-action films since 2010. Its fourth film Diary of a Wimpy Kid: The Long Haul, based on the ninth book in the series, is in cinemas nationwide in the UK from 26th May 2017.

We had the privilege to interview with Jeff Kinney, and we explore behind the scenes of the film. We are happy to share his valuable words with you. 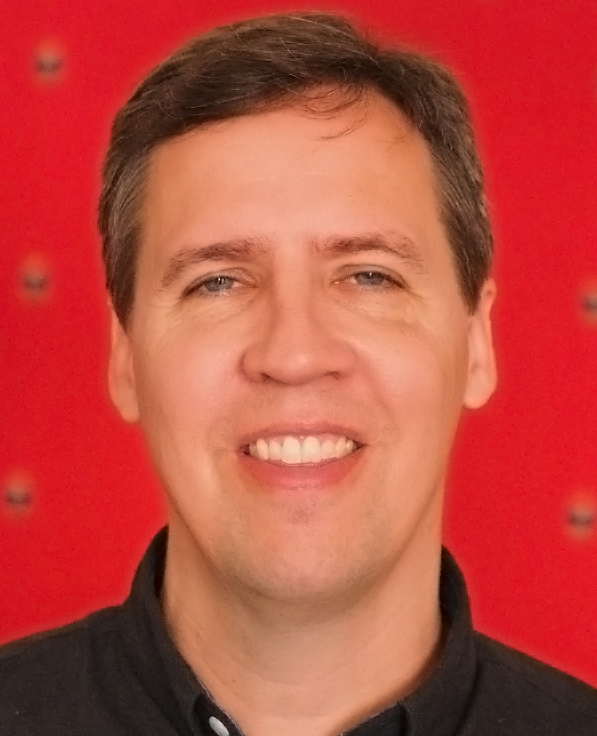 Hideki Nagaishi (HN): How did this film project start?

Jeff Kinney (JK): This film started as a book as most films do. But this book was different because I wrote it with a movie in mind. It was the first film that was conceived to eventually be a film. When I was writing the book, I was really thinking about all the set pieces, emotions, and the journey that the family has to go through. So a lot of that transferred from book to film.

HN: What was it like to get involved in writing for the film?

JK: It was actually really fun to be a screenwriter. I read a lot of books about screenwriting before I got started. I learned a lot. It’s a great art form. It’s very mechanical. It is truly formulaic, so it’s I think screenwriting is my favorite type of writing.

HN: Is there any difference between writing original novels and screenplays?

JK: In my books, for the Wimpy Kids books, the priority is always humor. The priority is never emotion. In a movie, you really have to hit certain emotional beats for the audience to go along with you on the journey. If you miss any of those beats, you’re not going to tell a good story or a story that feels satisfying to the audience. Also, in a film, those beats happen in very specific times. There is something that should happen in the first five minutes, and something that should happen at the 30-minute mark, and then something should happen at the halfway point. All these things are prescribed in the film world. In the books, it doesn’t really matter, especially with my books. You don’t need to hit those emotional beats at the same time.

HN: What is it like to see your characters transitioned into live-action?

JK: That was something that we had to get used to right away from the very first movie, which was taking these characters that are pretty simple line drawings and making them into fully fleshed out human beings. It has been educational along the way. I don’t think that you would have an expectation of what you look like on film, and we’ve taken a lot of liberties, of course, but in this movie especially, we took more liberties with the characters’ appearances. For example, Rodrick has long hair in the movie whereas he has short hair in the books, and mom’s hairstyle is very different in the movies as well. But I don’t think the audience will care about the difference that much.

HN: What is your favorite scene in the film?

JK: I think my favorite scene in the film is where the seagulls hit inside the car, because it’s really wild and unexpected. For a movie with this kind of budget, you’re not really expecting to see a handful of seagulls, so I think that’s one of the high points in the film. 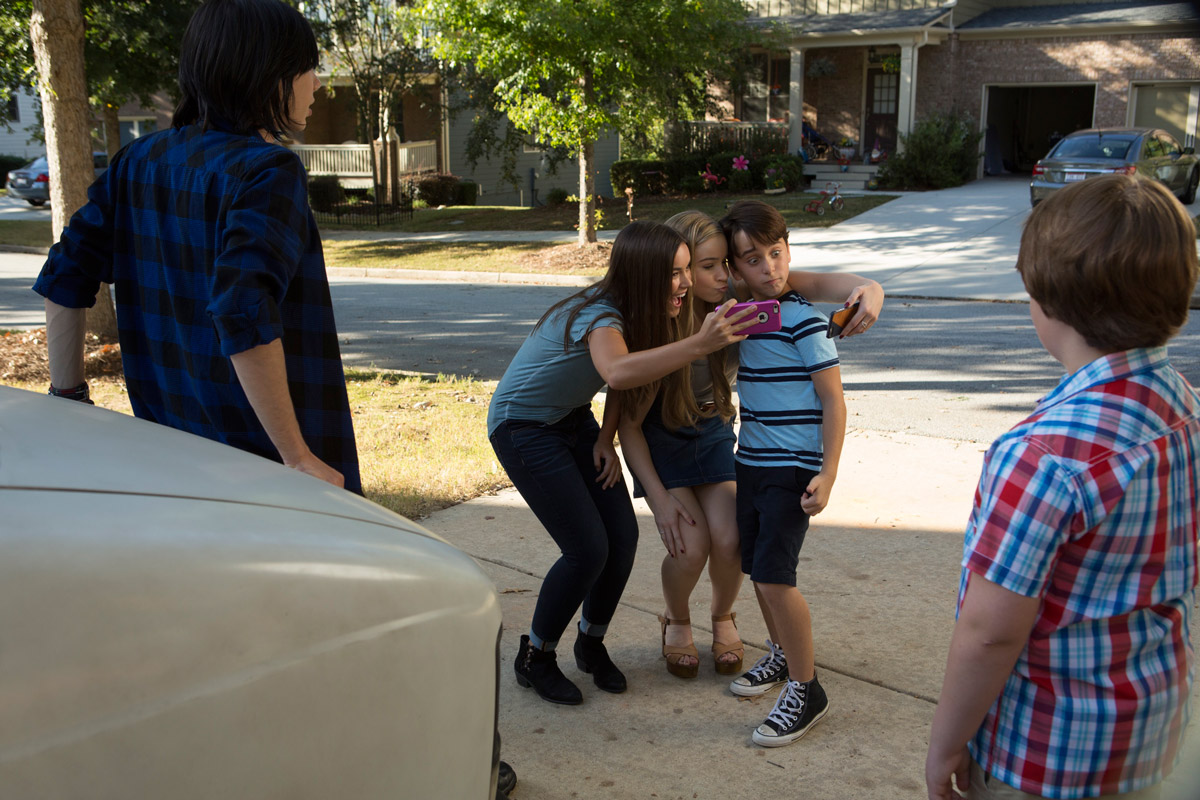 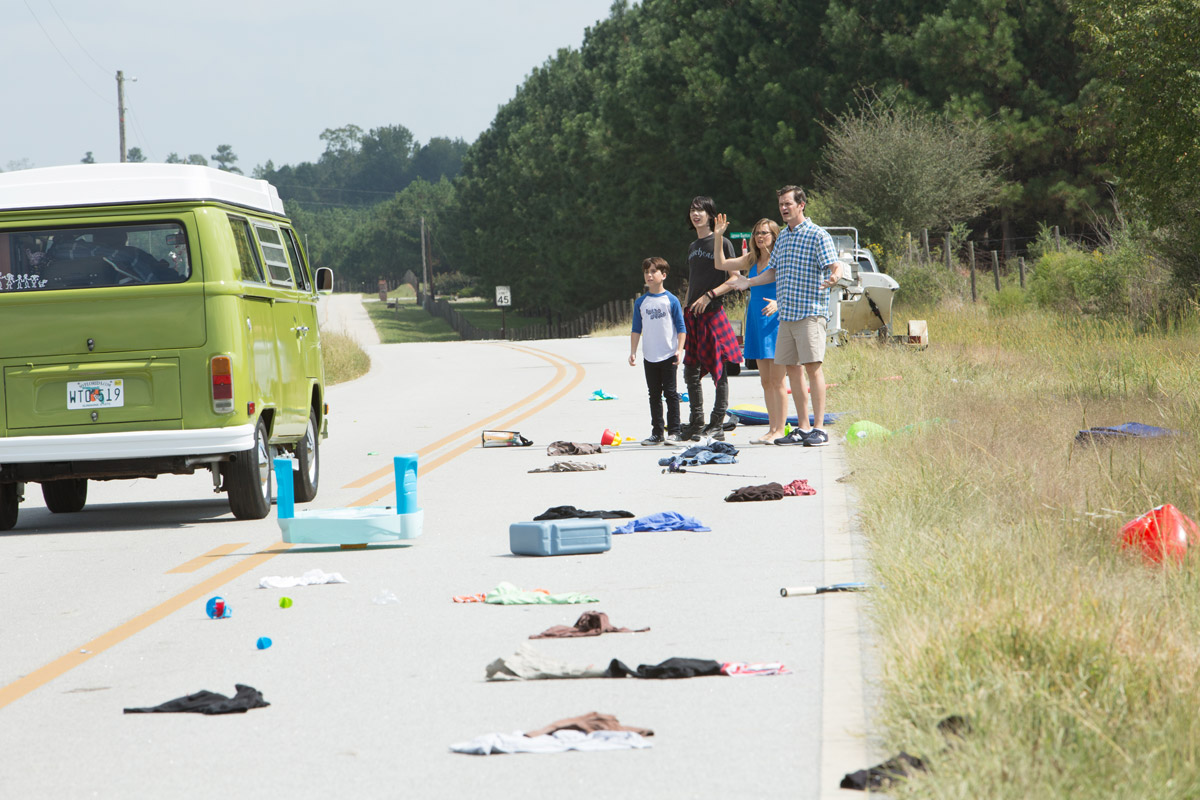 HN: How did you get the initial idea of the visuals for characters in the original book series?

JK: My goal was to become a newspaper cartoonist. So I trained myself in that style. I wasn’t able to succeed in getting my comics published in newspapers, so I took a totally different track. I decided to take my comics and put them into books, and that’s where Diary of a Wimpy Kid came from. What I learned, when I learned about cartooning along the way, is that cartooning really is the art of simplification, so my characters are really simplified and I tried to use a few lines as much as possible, and making the biggest impact possible, and I think that cartooning is hard.

Routine to create a story

HN: Do you have any routine to create a story for each book?

JK: I do have a routine, in a way. For a few months I just work on joke writing, so I just write about 350 jokes for the book. And then, once I get all my jokes written, then I start work on the manuscript, which takes about a month, and I do all the illustrations, which takes about six weeks. That’s a process.

HN: What kind of stories and works do you want to continue to produce in the future?

JK: I hope to keep working on Diary of a Wimpy Kid. I like this series. I think that the universe of childhood is very big and I should not run out of things to write about. So I don’t know if I’ll write new books. We’ll see. This year I might write a book about innovation, but I’m not sure if I’ll write another children series.

JK: It’s really interesting. In the past, two or three years especially, we’ve seen such a revolution in the way that technology has infused our lives, but with every kind of medium you need good content. I think that kids of today are going to be the creators of the next great content. There are so many tools that you can access with digital devices.

HN: Nowadays children have smartphones like the kids in the film. Do you think that the creation of kids content are influenced by that trend?

JK: Mobile really invites small bits of content, so kids want to see something that is really quick and they don’t want to invest in like an hour-and-a-half movie on their phone. I think that we are seeing more and more content that is really sliced up and digested easily.

HN: There are some animation parts in the film which have the same look of the illustrations in your book, and I love them. Do you have any plan to animate Diary of a Wimpy Kid like that?

JK: Yes, I’m hoping to make an animated version of Diary of a Wimpy Kid for television by using that style of animation, maybe.