11. GURU Studio: the story of a successful journey

GURU Studio is one of the leading animation studios in Canada and renowned as a creative-driven entertainment company, which is developing, financing, and producing highly acclaimed and internationally successful shows. They are behind globally popular animation titles such as PAW Patrol, Ever After High, and Justin Time. We had an opportunity to hear from GURU Studio about their successful journey via email. We are happy to be able to share their insightful story with you.

Animationweek (AW): Could you please introduce your studio with its brief history?

GURU Studio: We started seventeen years ago with a staff of four, producing commercials. Now, with a staff of over 320, shows we’ve worked on, such as PAW Patrol and Ever After High, as well as our very own GURU IP Justin Time, entertain millions of kids and their families around the world across an endless variety of viewing platforms. And we will continue to delight audiences everywhere with our upcoming Netflix Original, True and the Rainbow Kingdom, launching this August!

AW: Could you please let us know the characteristics of your studio?

GURU Studio: We are an artist-driven studio to the core. Our President and Executive Creative Director, Frank Falcone, is an animation artist and an award winning director whose enthusiasm for narrative art informs all of the work we undertake. GURU Studio casts teams dedicated to passionate storytelling.

AW: Could you please tell us the story of the two successful projects “Paw Patrol” and “Ever After High”? How did your studio take part in each project?

GURU Studio: PAW Patrol came to us via Spin Master’s VP of Development. Spin Master is a global toy and entertainment company based in Canada. Nickelodeon International had just picked up the show and their team was looking for a best-in-class studio with preschool experience to come on board early. Our work on Justin Time was well-known already, so we were more than happy to collaborate with their writers and toy designers to bring this show to life.

It’s wonderful working with creative counterparts who understand the true value of our design and storytelling abilities and who trust our decisions. Season 4 episodes of PAW Patrol are some of the highest rated episodes ever, proving that even with new directors and crew, the show continues to engage with audiences everywhere. We’re so proud of the work our team here at GURU Studio produced as we now head into the next season.

For Ever After High, Mattel, the world famous American toy company, approached us to produce a very secretive “blind” test to win the project. With no visual guides and a few spec dialogue snippets, we helped imagine this fairytale fantasy world. We were then so thrilled to see how closely our vision for the animation aligned with their team’s vision for the collective doll universe! And on a technical note, making the hair and clothing come alive in Toon Boom HarmonyTM 2D animation software, was also an amazing success story for us.

AW: What do you think about international co-production?

GURU Studio: Co-productions are an important part of our business. They give us a chance to work with storytellers from other cultures and to learn more about how others share stories. They also help keep us aware of the universe outside of North America. For example, Independent producers in the UK approached us with Dinopaws, which we raised considerable financing and support for in Canada. Also, The Breadwinner, which just wrapped in May and was our first feature film, is a co-production with Aircraft Pictures (Canada), Cartoon Saloon (Ireland) and Melusine Productions (Luxembourg). It comes out Fall 2017. 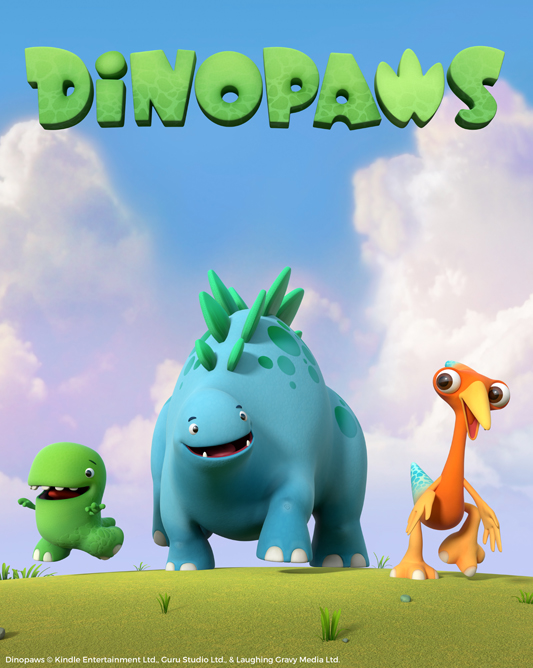 AW: We would like to ask you about the distribution side of your business. What kind of benefit are you receiving from having a distribution department in an animation studio?

GURU Studio: Having a distribution department is beneficial, however we are not a catalog sales driven company. GURU Studio prefers to sell shows that we have had a direct involvement in, rather than shows we have not been a part of producing. It is a more honest approach, in our opinion, to be selling something we have championed from inception. When we create something, we really do know those stories and can therefore best connect them to the market.

GURU Studio: GURU Studio approached Netflix with Justin Time back in 2012 as we thought it would be a perfect fit for Netflix. We avoided “aggregators” and big distribution entities, so we did not have to forsake our relationship with the SVOD companies. We truly believed that Netflix would be a part of the future of content and held fast on that belief, until they purchased this single show off of us! At that time, we don’t believe they had ever purchased a single kids show from an independent producer. The show performed remarkably well on their SVOD platform, which prompted the order of Justin Time GO, A Netflix Original, commissioned exclusively for Netflix subscribers, from us in 2014. Justin Time GO is now available in 20 different languages and watched all around the world.

AW: Could you please let us know the future plan of the studio?

GURU Studio: GURU Studio’s plans moving forward are to increase the ability to work with the best creatives, no matter where they are in the world. We want to continue making entertainment for kids and families that provokes thought, makes you laugh, and allows you to enter a new reality. We are excited for our numerous upcoming opportunities and looking forward to forging and pioneering new creative relationships, both business and production-wise. GURU Studio is bringing fantastic new animated content to our audiences every day, so feel free to tune in!

11. GURU Studio: the story of a successful journey