Wes Anderson uncovered his latest film Isle of Dogs on 15th February at the Berlin International Film Festival, and it is his second stop-motion animated film after Fantastic Mr. Fox. After it recorded a good box office in America, the topical animation came back to Germany again during the 25th Stuttgart International Festival of Animated Film on 25th April as a special screening before its official release in Germany (10th May).

The role as the production supervisor

Hideki Nagaishi (HN): Could you please let us know your role as the production supervisor?

Angela Poschet: My role was a production supervisor in both production and working very closely together with producer, Jeremy Dawson, and the line producer, Simon Quinn. I was also involved from the very early beginning. I got a phone call in September of 2014 from Molly Cooper, the consulting producer, asking me about the possibility of maybe shooting in Germany or in eastern Europe, maybe Prague or Poland. And then the second contact was with Jeremy in January 2015, and he asked me if I could do a breakdown of the script, which was still in progress, and the first budget and the first production schedule.

My main role is really, then, to follow that up on a weekly base, planning and setting the targets per weeks and months ahead, and monitoring the puppet build to make sure that the puppets and sets arrive on time to the studio floor for shooting to keep the shooting rolling. This is my position then, and also weekly reports need to be produced and sent to the main producer, which was Indian Paintbrush*. So, they can follow up how we are doing, how the progress is. As a production supervisor, you are always working close together with the producers and with the head of each department.

*: A production company owned by Steven Rales, who is supporting many of Wes Anderson’s films. He was the executive producer of The Darjeeling Limited and Fantastic Mr. Fox, and one of the producers of The Grand Budapest Hotel and Isle of Dogs. 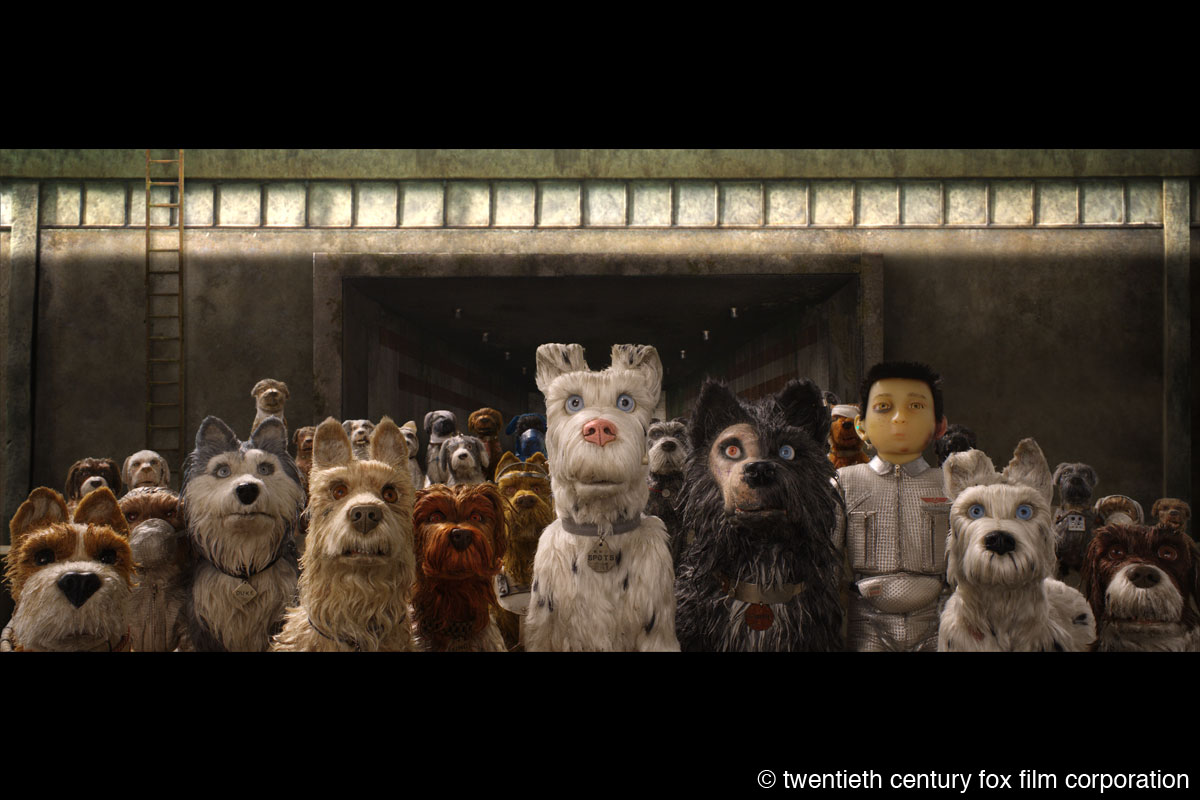 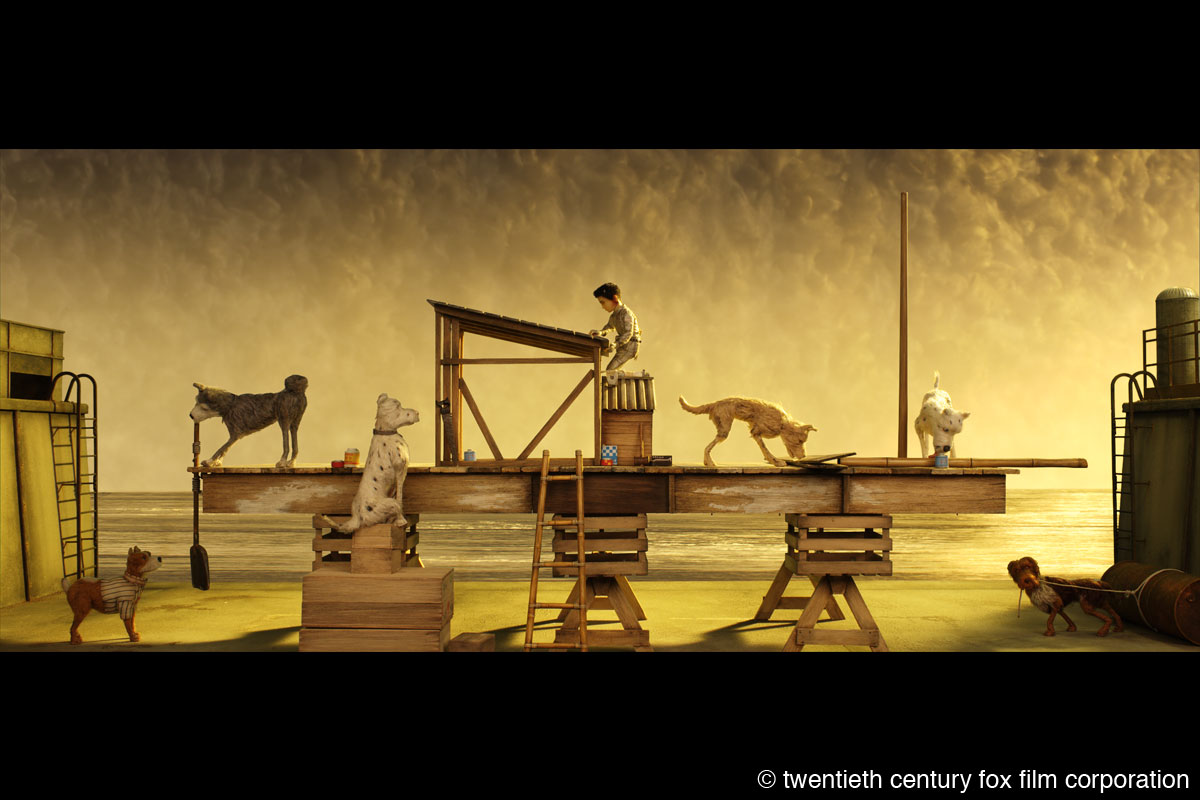 HN: You told us that the production team needed to make a lot of complicated puppets, sets, and other many materials within a time limit. What was the key point in managing such a hard production in a tight schedule whilst achieving a very high-quality outcome?

Angela Poschet: I think the key point is, for the puppet and set fabrication, that you work with people who have done this before. The puppet department was run by Andy Gent. He worked before on Fantastic Mr. Fox among many other features. I got to know him when I was working on Frankenweenie, by Tim Burton, and he has a lot of experience in building puppets. Roddy MacDonald, a veteran in the film business, who was the set construction manager, also worked on Fantastic Mr. Fox and on Frankenweenie, where I got to know him as well.

HN: In the film, there are some 2D parts, such as where there is a live broadcast in the film. How are the 2D sections of the film managed?

Angela Poschet: Everything that we see on screen, was predefined, such as whether it is or contains a 2D animation. We had a little team with Gwenn Germain as an animation director, about ten people, who were doing about five minutes of 2D animation, and this was a little extra department on its own, also based with us.

Of course, sometimes they needed to wait until they get the stop-motion animation from our side,from the studio floor, because sometimes what we saw on screen was done before as a stop motion. 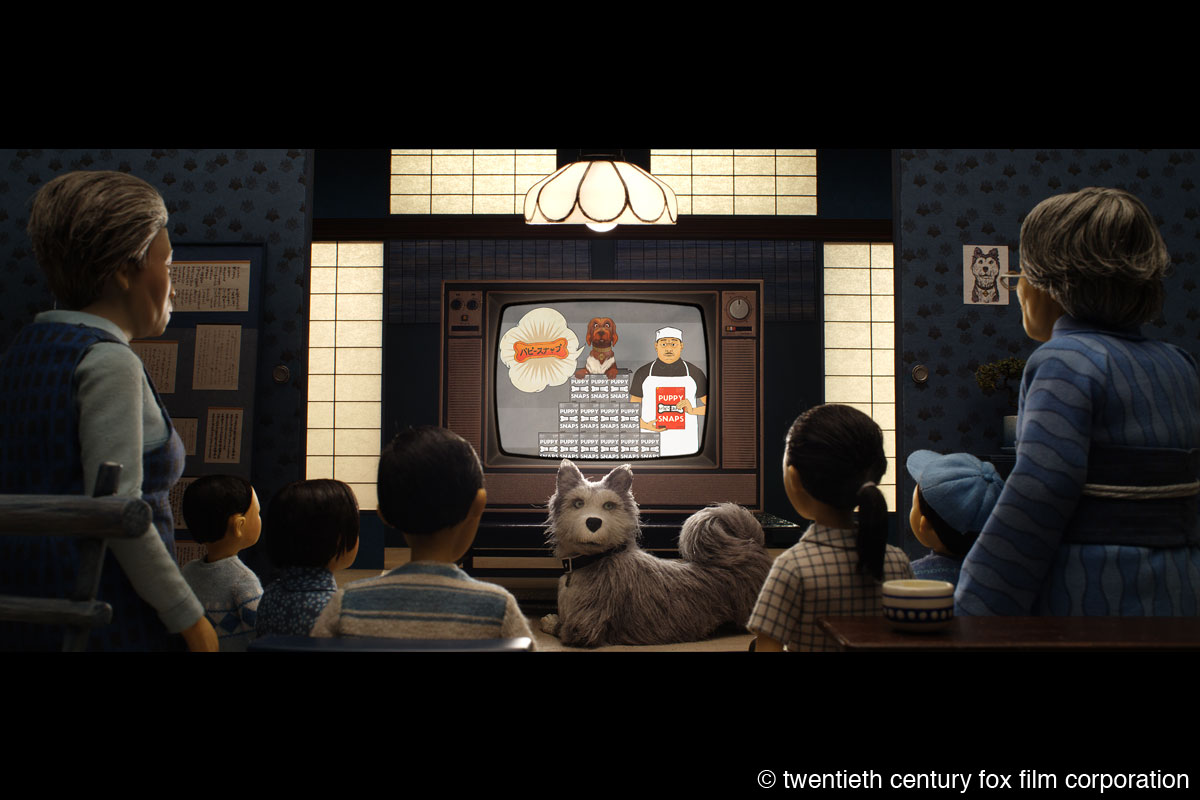 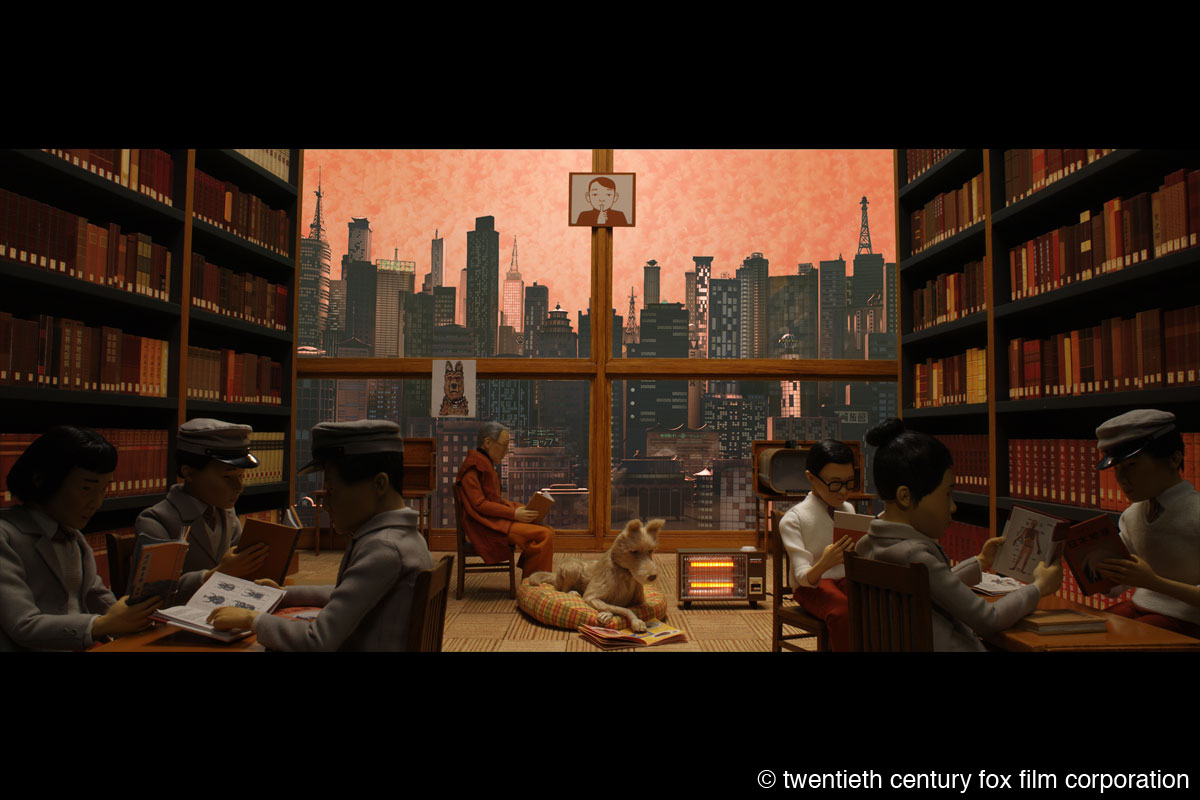 HN: What did the animation team take care of when they animated the dog puppets?

Angela Poschet: Wes Anderson prepared the director of animation, Mark Waring, and the animators by screening 60s-era films of Akira Kurosawa, because Wes wanted the animators to be influenced by their style and the reserved approach to performances for the humans.

There were also lots of dogs running around in the studio, which have been studied by the animators. The dogs in the movie behaved like dogs, they have fleas and scratch themselves and bare their teeth.

I can also mention for example, that Jupiter, a dog in the film, is based on Charles Laughton, so Wes had a human in mind when designing and directing him. I can imagine that he was briefing the animators to have certain skills and being inspired by real humans, to such things as what kind of characteristic quirks the dogs have.

HN: How did the skin material of human puppets and the fur of the dog puppets looked so lifelike?

Angela Poschet: For the human puppets’ face, the artists used silicone replacement skin to create a wider tonal range than what’s been seen in puppet faces before. It is a semi-translucent skin which works really well when you want to show freckles or bruises, which were hand-painted. The fur on the dogs is harvested alpaca and merino wool which is used to manufacture teddy bears.

HN: In terms of making puppets, sets and all materials for the film, what was the most challenging or difficult part?

Angela Poschet: I think the challenging part was making the replacement faces for the humans because they were all handmade and hand-painted. We didn’t use a 3D printer. It is quite challenging when you have a character with freckles, with different replacement faces, up to 20, 30 and even more for some characters, and you have to duplicate the puppets for example three times, and then you have to paint all the faces. 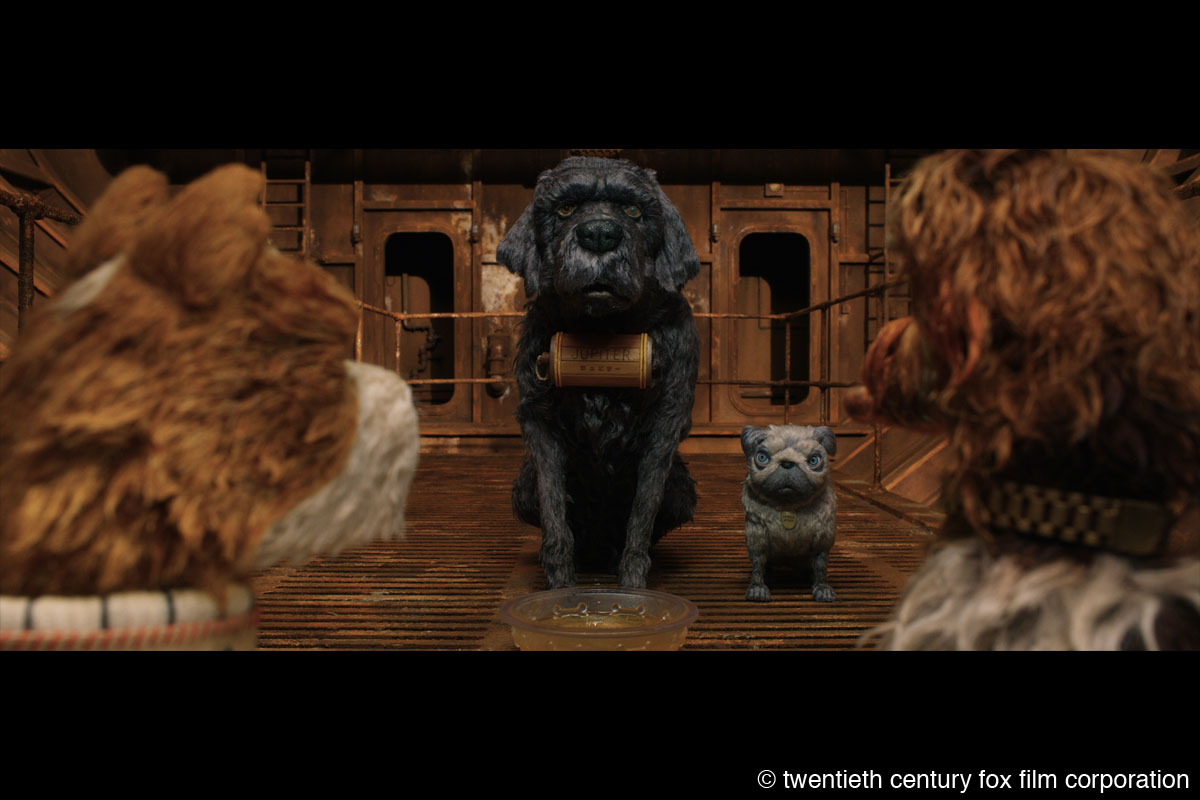 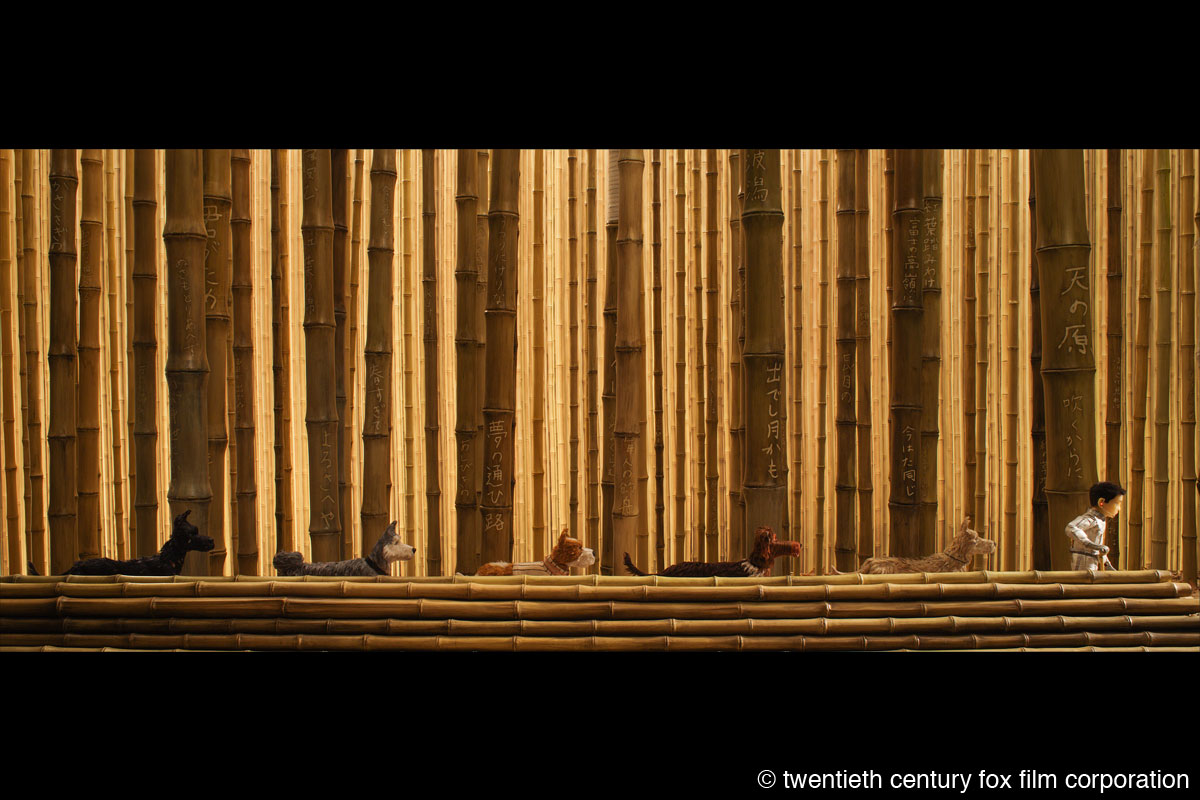 HN: You said in the lecture that the production team created many effects like smoke, fire, rain, water and so on via stop-motion with handmade materials, and it was a big challenge.

Angela Poschet: Yes. For example, clingfilm was used for water, shades of yellow gels have been cut to a fire shape to create a fire effect. We had clouds as a flight trail, which was very cartoony, that was done with cotton wool. Of course, there might be some stuff which is being added in post-production, but everything is based on a real asset being built and shot in front of the camera, which then the VFX department took and use it for building and finalizing a shot in compositing.

Currently, everyone tends to do effects in post-production and not do it in camera, but Wes was insisting to do all effects in stop-motion and it took months of animation testing to find out which material was the best to use for water, clouds, rain and fire. We had always two or three units running in parallel to our shooting, where we tested some different special effects and how it worked out, and we gave this to the post-production team, and they put it in and edit it into the shot. We had, during peak time, 40 shooting units. Out of the 40 shooting units, three to four testing units and, the animation supervisor Tobias Fouracre was in charge of testing all the effects with a team of assistant animators.

HN: Was there anything different or unique in the production of Isle of Dogs, compared to other stop motion animations you worked for?

Angela Poschet: I think what was unique was really the amount of sets and the amount of puppets we needed to produce. I’m not saying normally, but when you write a script for a stop motion, I think normally you might have 100 cast of different characters, and maybe 80 sets.

Here, we had 500 puppets and 400 audience puppets, and then we had 240 sets, so that was really challenging to see this amount of assets, which need to be built in a very tight shooting schedule to deliver, week-wise, up to nine puppets per week. This is quite amazing, considering the timeline.

HN: What is your favorite part of the film?

Angela Poschet: The problem is, for me, I’ve seen the finished movie the first time at the premiere in the Berlin International Film Festival, and I was very nervous, so I really couldn’t watch it, in a way. Then the second time, I was watching it with the team in London a week later, and I was still watching it, and thinking:

“All right, this is this scene, this is that scene, and we had this discussion, and we had that problem”, so I’m not really leaning back yet. At the screening event yesterday, I enjoyed the movie for the first time!

Everything looks very good in itself. It’s a bit hard for me to select a favorite part of the film. Of course, I like the scenes where Chief is talking and telling his story about his formula. I also like when they’re gossiping around. I prefer the scenes where the Hero Pack Dogs are together. I can’t pick a specific scene right now.

HN: What was the most special time for you in the Isle of Dogs project?

Angela Poschet: I think it is always in the beginning of a project, reading the script the first time, then analyzing the script, then breaking it down and figuring out the amount of assets that need to be built, producing the asset fabrication schedule, presenting this to the producer the first time. This is, really, the most interesting thing, and then planning out the complete schedule on the set and puppet fabrication in detail. Once this is done, then it’s “only” monitoring and following the fabrication progress up – week-by-week.

I always like being involved from the very beginning, and setting up everything for the production. This is the main thing, and it is always good fun to do this.

I really enjoyed working on Isle of Dogs with such a fantastic team!