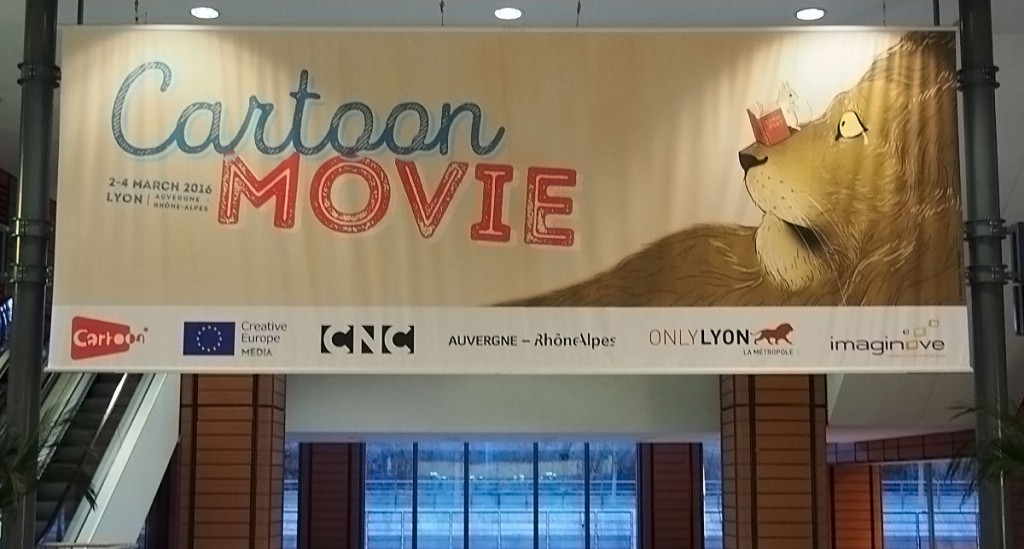 The 18th Cartoon Movie organised by CARTOON was held from 2nd to 4th March 2016 in Lyon, France. It is the only pitching event dedicated to animated feature films in Europe. More than 750 professionals from 40 different countries ranging from producers, investors, distributors, and sales agents gathered in one place. Fifty-six selected projects by CARTOON from 19 European countries were presented. They showed richness, depth and a variety of European animated films.

The significance of this pitching event is that it gives everyone from big to small opportunities to present their projects for further development. Projects can be presented in the stage of concept, in development, in production, and as a completed film. It helps to find co-producers, speed up financing, and negotiate deals with distributors and sales agents. It also gave them a chance to meet game companies for cross-media development.

Cartoon Movie has been growing and recognized as the most prominent and efficient meeting place among producers, investors, and distributors of feature-length animated films to create synergy since its start in 1999.

We asked Marc Vandeweyer, General Director at CARTOON, how this amazing pitching event came to life. He explains that Cartoon Movie took off following two successes. One is the continued success of Cartoon Forum, a co-production forum for TV animated series, which began in 1990. After about 10 years of success with Cartoon Forum, the timing coincided with the international success of Kirikou and the Sorceress (1998, France) and La gabbianella e il gatto (1998, Italy). This is another success that led to the launch of Cartoon Movie.

Vandeweyer describes that Cartoon Movie is designed especially for professionals in the industry: “You have to work together in animation. We put everyone together. Pitching sessions are very fast and efficient. You discover the project whether you are interested in it or not. You can continue discussion after the presentation.”

He states that one of the strengths of Cartoon Movie is to accelerate the financing of the film and explains the importance of the involvement of sales agents and distributors at the very beginning of the film development. “Before Cartoon Movie, it used to be that the director and the producer completed the film and then tried to convince the distributors and sales agents to distribute. However, there were always some problems, like the film was too long, so that distributors could not distribute much. Now they are involved in each project at the very beginning and they can bring their knowledge and raise the quality of the film higher together. In the end, the film is better and finds better circulation in Europe and the world.”

The recent trend in Cartoon Movie

Vandeweyer says: “We see that producers are trying to publicize the niche. We believe that there is a place for young adults. Now we can talk about any subject and animation techniques, they can do what they want to do.” He used Another Day of Life as an example to highlight that animation now treats the subject matter in a way which we never expected. The story is about a child soldier in Angola and the film is live action mixed with animation. He explains: “It is a very difficult subject. At the beginning, they wanted to do 1/3 animation and 2/3 live action, but they decided to change the ratio completely. They discovered that the images from the animated parts were much stronger.” He also adds that the public should follow and realize that animation is not only for children and says, “The next step is to catch the public.”

“We are trying to build the new generation. All participants are graduates from animation schools within a maximum of 5 years and they can pitch their own projects. 15-20 experts (buyers, distributors, broadcasters, producers, and transmedia companies) give advice to their presentations. The goal is to improve the project by following advice from these experts and once their projects are improved they can come to Cartoon Forum and Cartoon Movie.” He continues: “It’s very important. They can learn by other projects, can do networking with younger producers, directors, and artists. It’s really for a new generation. Because it’s quite often that they just go to USA to work in the major studios and they are just going to be workers there. So we are proposing them opportunities to develop their own creation, own films and series. To be an entrepreneur of audiovisuals is our goal.”

CARTOON is also working with several schools and offers a coaching program during Cartoon Springboard. He says: “We are not only bringing animation schools but also management schools. So you can mix animation school and management school and something could happen from there, and then students can develop their own company and start new studios. The goal is to build the new generation and keep developing talents in Europe.”

For those who are reading our articles in the UK, this opportunity is also open for all the students at British animation schools.

Opportunities who are based outside of Europe

We asked Vandeweyer how producers based outside of Europe can possibly attend this amazing opportunity offered in Cartoon Movie. He answers: “I would like to keep the size. It’s already big because it’s between 700 people to 1,000 people. I think it’s enough. We have to keep good human contact at our event. That’s the most important thing. This is the reason why we are not expanding to other parts of the world.”

Don’t be disappointed for those who are based outside of Europe. CARTOON offers alternatives. He says: “We have another activity called Cartoon Connection. We organize it in Canada and South Korea. Producers have a chance to be selected to come here to either Cartoon Movie or Forum. That’s the way.”