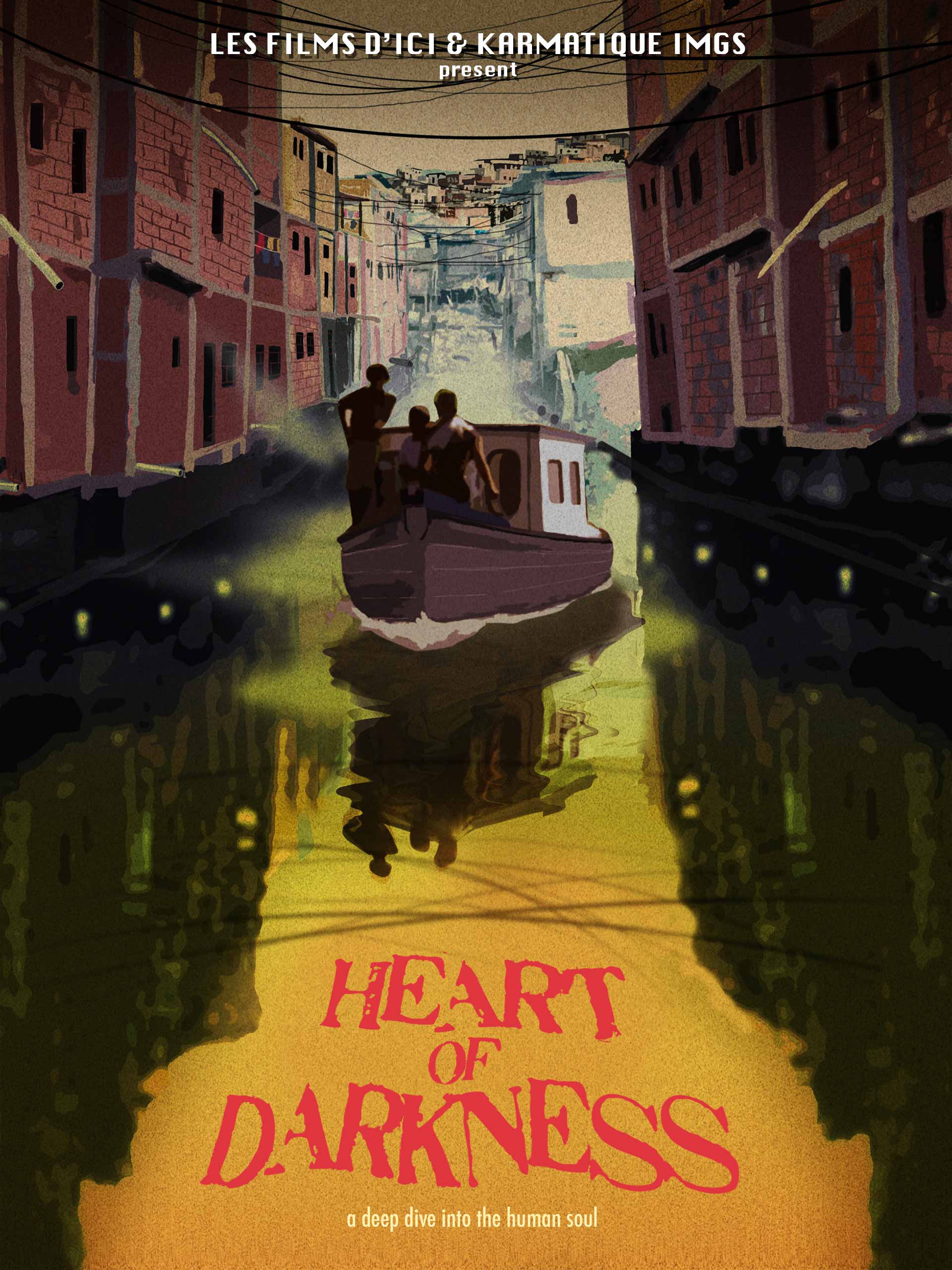 It’s Rio de Janeiro in the near future, where Marlow, a police officer, is assigned to a mission to find Captain Kurtz, a famous policeman who went missing in mysterious circumstances. Undertaking a dangerous journey through the outskirts of Rio de Janeiro, Marlow does his mission in a boat. 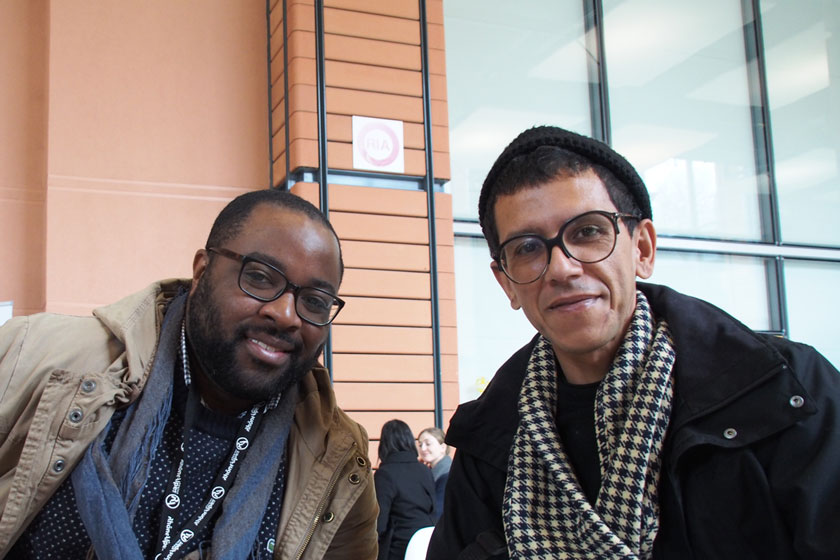 Heart of Darkness is an adaptation of the novel of the same name, written by Joseph Conrad in 1899. Rogério Nunes, the director, changed the setting from Africa to Brazil and is developing into a featured film with Sébastien Onomo, a producer at Les Films d’ici. It is a co-production between France and Brazil.

We had an interview with Rogério Nunes, the director, and Sébastien Onomo, the producer, about the film in development.

The start of the project

Animationweek (AW): How did you meet and decide to work together?

Sébastien Onomo (SO): I met Rogério at Annecy International Animated Film Festival 2014. I heard his pitch about this film there. During his pitch, I was excited about its strong and original story, so I contacted him after the pitch and proposed him to co-produce the film, because I saw real potential for the international market in his story and universe.

AW: Rogério, why and how did you decide to do the project?

Rogério Nunes (RN): I came across the story some years ago when I was asked to illustrate the Brazilian edition of Heart of Darkness. Then, I read the book for the first time and thought that this story could happen in an original universe. The stage of the original book is Africa, but I thought that it could happen in Rio de Janeiro and in Brazil. I started to develop the idea and the script. After that, I sent my project to MIFA (The International Animation Film Market, which is held in conjunction with the Annecy International Animation Film Festival). My project was selected as one of the 6 selected projects for feature films among 69 applied projects.

AW: From the beginning, did you have a plan to develop it into a featured film?

RN: My first idea was to make a Brazilian local film with low budget. I received a proposition to create a short series from a Brazilian TV company. Then, I revisited our old idea of making a film. Movie theaters are a more noble support and all the people I talked with, including Sébastien, always said to me, ‘Go for a film’.

Collaboration between France and Brazil

AW: How did you decide the visuals for the film? Did it come from international collaborative work?

RN: I think that collaboration with France is very important because France has a very strong, historical, and traditional 2D animation heritage. Brazil has some successful cases like Boy and The World(Portuguese title: O Menino e o Mundo) and A Story of Love and Fury (Portuguese title: Uma História de Amor e Fúria) but we’re still beginning to learn how things work. For instance, we don’t have many traditional animators in Brazil. So at first, we thought that ‘France could contribute a lot with supplying animators for the project while Brazil would supply all other things for the project like backgrounds, compositing, cleaning and colours.’ Of course, we want to have a touch of European animation in our project.

AW: How are you finding this collaboration between France and Brazil?

SO: For me, it is very simple. When I decided to co-produce this project, my goal was to keep the Brazilian DNA of the project and to re-enforce some aspects of the project with the experience of French animation. We tried to put a French touch on the strategy to have a strong project with the aim of keeping the Brazilian DNA. We have this intention on the script, on the soundtrack and the animation of the film. I think it’s a good way to keep the DNA. It’s very important in this kind of project that the country which is the origin of the project is to stay respected by the partner.

How to decide which film to produce

SO: The first target of my project is me. I want to produce a film that I could watch. This is very important for me because I think what I could watch on TV or cinema could be enjoyed by a matured audience like me. After that, I want to follow an original point of view and an original graphic touch, it’s the second thing that is important for me. I’m focusing on the story and the graphic style as a way to tell a story. That’s my consideration for animation. Telling a story to children is not my daily work. I want to tell people in my generation, so that’s the reason why I focus on adult animated film. I have another project for a family target that still has a strong subject and original point of view because I think it’s very important. I want to have my DNA in animation and to be recognized by my colleagues as someone who does this kind of film.

AW: I see. Both of them are strong projects.

SO: It doesn’t matter, if it’s difficult. It’s not my primary motivation. I just want to propose a singular story to the audience.

AW: Rogério, do you also plan to do animations for adults? How did you decide on this project?

RN: The first thing I thought about is creating the universe for Heart of Darkness. It was quite clear that the film was for the adult audience although the audience might vary from one country to another. I think in Brazil we may attract a younger audience than here in Europe. I think that the project has different qualities that might be more appealing to one audience than another. It holds a little bit of action and psychological complexity. This different thing can be more appealing to the public in Europe or the public in Brazil. I think that the audience in Europe is going to be from 20 to 25 or 28 years old, and the audience in Brazil is a little bit younger and could be between 16 and 20 years old.

AW: Thank you. What kind of challenges or difficulties have you met since the start of the project?

SO: Most important challenge for the production of the film is to convince the broadcaster to go on the adventure with us because producing a film is a really big and intensive adventure. Convincing a broadcaster to be a partner to an animated film for adults is like being a builder of a wall. A big wall.

RN: I guess that the public perception is still under formation. It’s a new concept that would take a while to be accepted by a wider public.

A promising collaboration between France and Brazil

As you may discover by seeing the trailer, the action and the city of Rio de Janeiro is beautifully animated. You may already be able to feel the thrill of a story. Rogério Nunes thought through the perspectives for action scenes and successfully represented the buzz of the area in Rio de Janeiro where the story takes place as he explained at the presentation. Characters designed by Mathias Lachal match the story that targets adult audience.

It is expected to be in production in early 2017 for the release of 2018 if funding is completed. They are looking for funders, and also broadcasters, and a distributor for France and international sales. We hope that you join their adventure together and could look forward to the release of the film.