Final Space, a new sci-fi comedy that started airing in North America in February, will come to Germany on 15th May. The show was created by independent filmmaker Olan Rogers, and is based on the YouTube series Gary Space, also created by Olan. The series was co-developed with David Sachs. Conan O’Brien is participating as one of executive producers and voice actors. His company, Conaco, is listed as a production company.

Final Space is a new comedy about the adventures of Gary, a space-faring commander (but actually, he is a prisoner) and his sidekick Mooncake, a very cute alien with the ability to destroy planets. Together, along with many other characters they will meet, they will unravel the mystery of the end of the universe.

Creator Olan Rogers and actor Coty Galloway (voice actor of Avocato) visited the 25th Stuttgart International Festival of Animated Film, one of the biggest animation festivals in the world. The Animationweek editorial team could have the precious opportunity to hear behind the story of the hot new animated series. I’m excited to share their words with you. 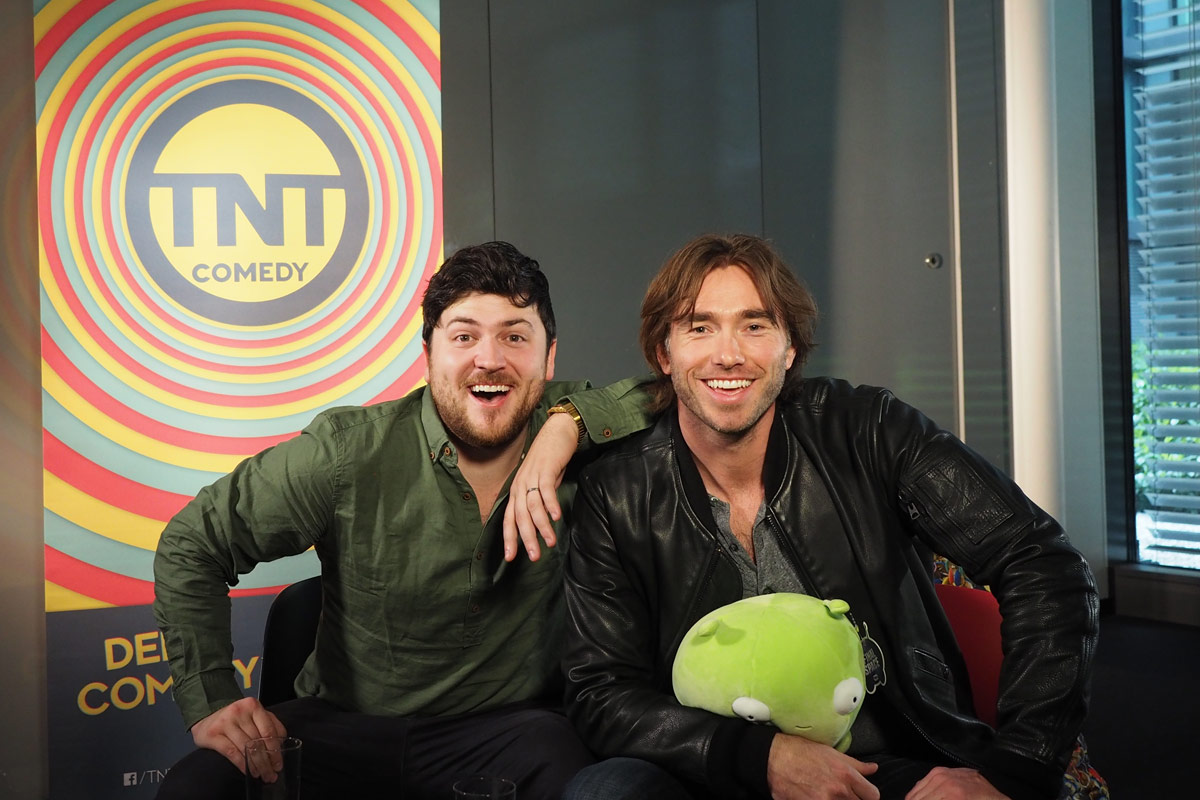 Trayton Scott: Where did the initial idea of the show come from?

Olan Rogers: It started off as a proof-of-concept on YouTube, and essentially we worked on it for about 5 months. Before that, the inception of the idea was another little YouTube series called Gary Space, and that was back in 2010. Essentially, from that proof-of-concept, we brought on a producing partner Conaco, which was Conan O’Brien’s company, and they essentially came on as those producing partners, and we were able to come up with a pitch and take it out, and the rest is history.

Trayton Scott: How did Conan O’Brien get involved with the show?

Olan Rogers: Apparently, I guess an intern or one of his people that worked at his company was just up really late at night, Kramer I believe, and he saw Final Space. He sent an email to Conan’s 2 executive producers that oversee a lot of original content, and apparently this guy just never talks, so it was a rare occurrence that he would even send an email, so they’re like: “Oh, I guess we’ll have to check this out.” The moment they checked it out, it was when they came on board.

Trayton Scott: How did you gather the initial crew for the show?

Olan Rogers: The cast side of it was pretty fluid. It was the moment we got Fred Armisen, who was on Portlandia and Saturday Night Live, everybody else just came on board. We put out what was essentially an offer, and they accepted it. The crew was gathered from a lot of BoJack Horsemen storyboarders and directors, just because it is done under the same company named ShadowMachine, so it was just through them, that they pulled all their talent that works with them. 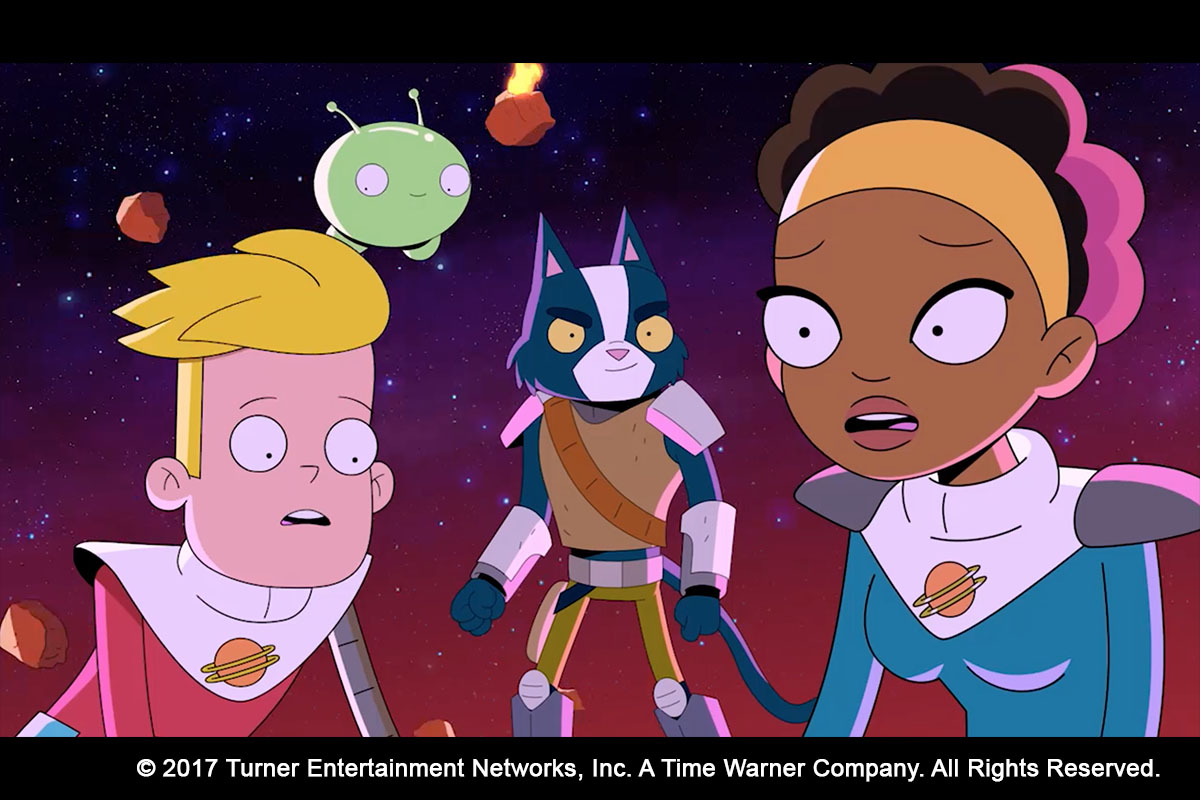 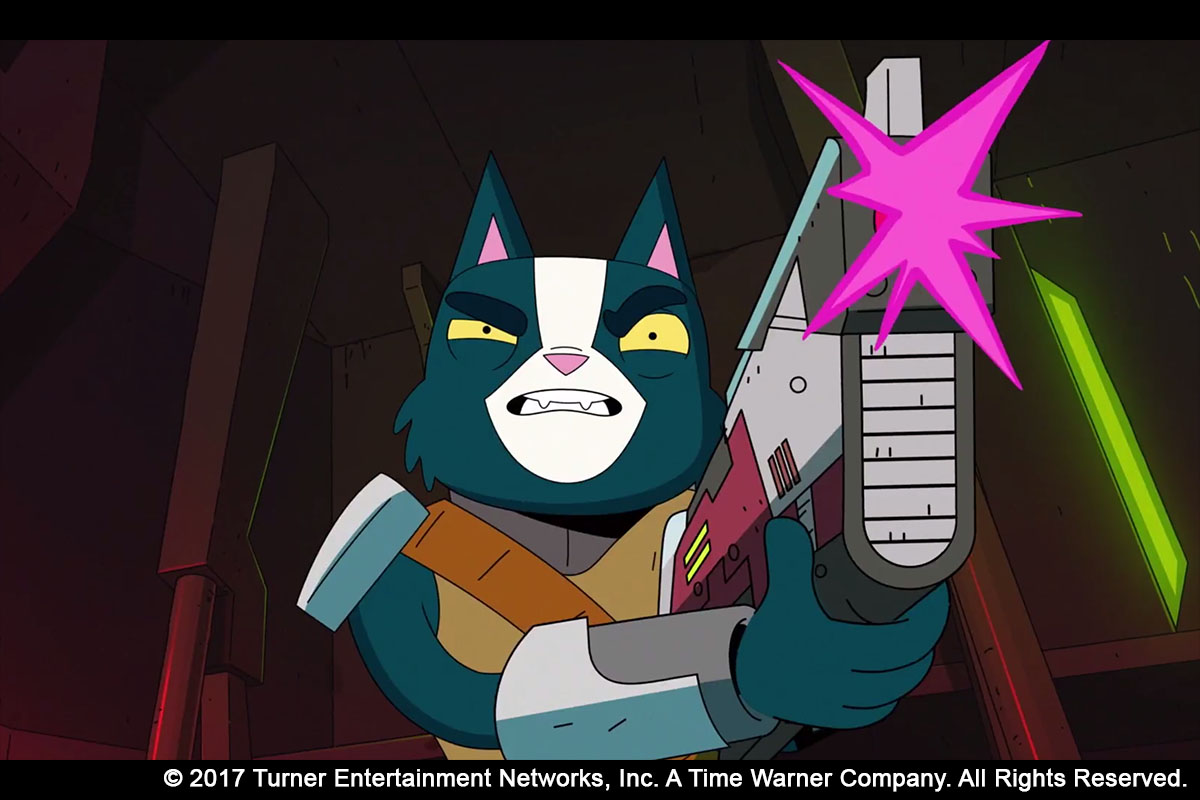 Coty Galloway: I’ll go on record saying this: David Sachs and Olan Rogers did an excellent job creating these amazing scripts, so I think the excellent cast that came on and read these great scripts, had said: “Well, I got to be attached to that in some way”. That’s my theory.

Thinking as an actor, how other actors may think, would be that when you see these amazing things, you gotta be a part of it somehow. I really think that they read something spectacular, and the scripts are really good, if you get the chance to read it, I hope you can, because it is a blessing.

Trayton Scott: How was the original pilot on YouTube put together?

Olan Rogers: A digital company, New Form, is funding a lot of online creators’ passion projects, and they gave me about $20,000, which was the smallest amount, out of the pool that they gave money to all the creators, because they didn’t think animation was going to do anything for them. We ended up taking that budget and basically farming it out to this Australian animation company called Studio Joho, and it is these two Australian guys, who are so talented, but they had never done anything like this. It took a little bit of telling them exactly what I wanted to do. After we did that, they immediately got it and they knocked it out of the park.

Trayton Scott: You have made some original YouTube shorts, what was it like transitioning to working in a TV series?

Coty Galloway: Amazing! I started off as an actor in the YouTube realm. It’s a great avenue, for creating things, and Olan being a major creator in the field of it, it’s definitely a bigger-picture type mindset. You start things, you’re having fun, you’re creating your own things, you start to see the bigger picture, you want the growth and the progression, it’s all work. There’s not a lot of money in that thing, but you gain knowledge and wisdom in how to do things, how to fail, how to get up. Especially as an actor, you see a lot of different things, and now I’ve been fortunate enough to grow and progress and grow in my career, seeing the TV side of everything. I learned a ton, so I’m very blessed to get to work with a guy like Olan Rogers.

Olan Rogers: Well I did online for a decade or more. That’s always been the game plan, to get off online into TV. With YouTube, you have nobody giving you notes, you don’t really have to impress anybody except for yourself. With TV, you have executives, you have the network, you have the company… It’s a whole production, and it’s a monster, so in that aspect, it’s more compromised. You’re compromising a little bit here and there to basically take everybody’s insight.

Coty Galloway: Coming from YouTube to now being on TNT comedy, 11pm, May 15th, in Germany! It’s quite amazing, right? 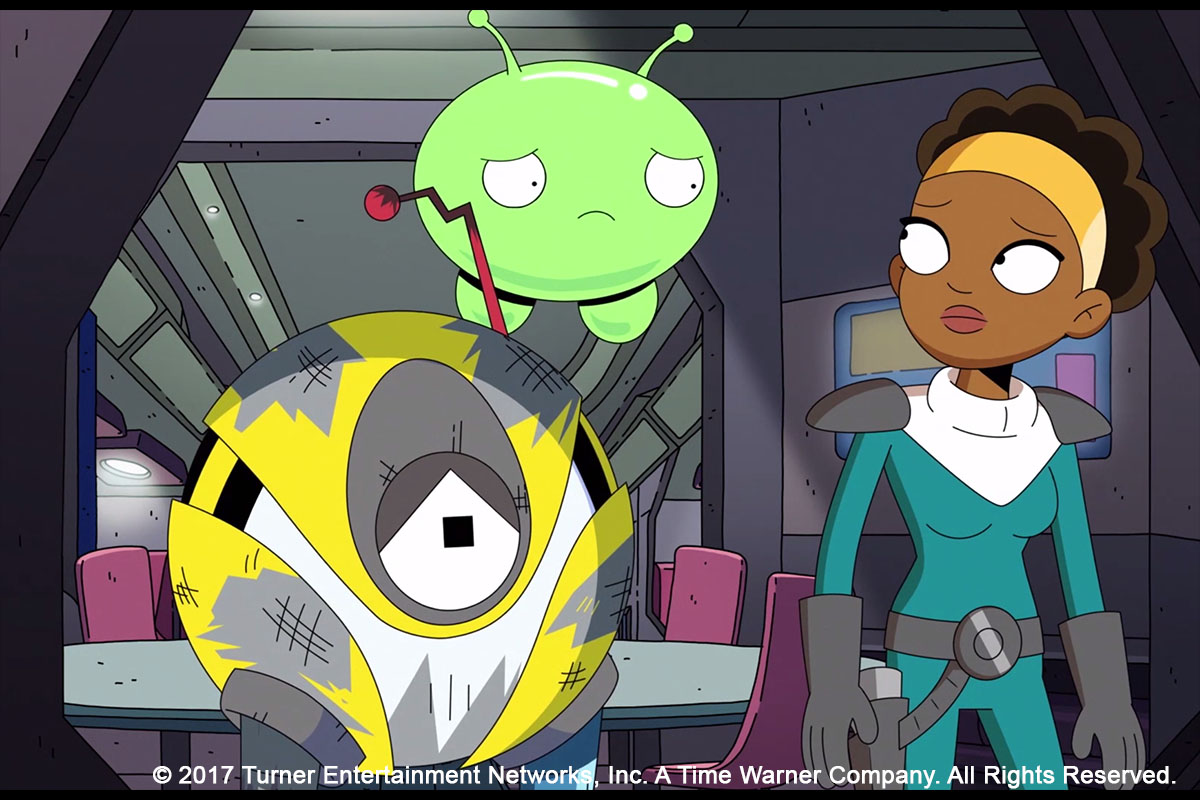 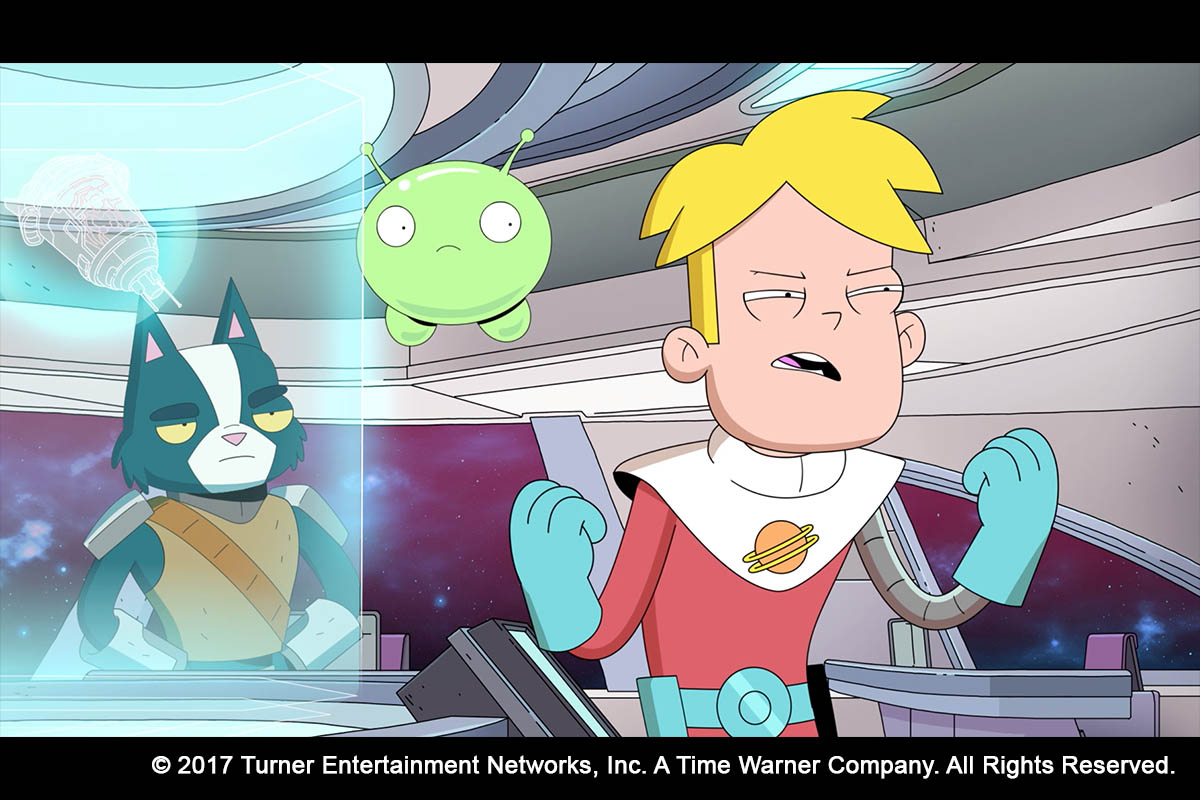 Trayton Scott: What is the process in coming up with the gags in the show?

Olan Rogers: Usually when we’re writing, the best joke wins. A lot of it is inspiration from movies, whatever makes us laugh, and we put a gag or a spin on that. it essentially just what makes us laugh.

Olan Rogers: First off, that started off in the writing phase, so we had to essentially write what those action scenes were, and from there, the storyboarders would take it and put their spin on it, and the directors would do a pass, and then we would send it out to Jam Filled, and they would animate the thing. It’s so many steps, not just one person did just the action scenes, it was probably 100 more people doing each action scene.

Trayton Scott: Do you have any advice you would like to give to creators who wishes to create an animated series?

Olan Rogers: It’s essentially persistence, and making what you always wanted to see. For Final Space, it was something that I always wanted to see, which was this early Toonami or Dragon Ball Z reboot. Making something that had a continuous story and you saw these characters grow, but had genuine emotion, and heart, and action, and comedy and drama. I think that doesn’t need to be every cartoon. you can have these absurd, hilarious cartoons, you can have anime, and all that stuff. That’s the beauty of animation, it’s as big as your imagination. Just dream big and go for it!