06. Behind the story of “Cracké Wacky Island”

The presence of Canadian animation is continually increasing in Europe during recent years, and Squeeze Studio Animation in Québec City is one of the most prosperous Canadian studios, which already have global IPs.

Cracké, a 3D animated comedy TV series (52 x 1′), is the hallmark of Squeeze Studio and aired by international distributors, including the three leading global animation broadcasters: Nickelodeon, Disney Channel and Cartoon Network. The 1-minute short animation series are funny stories of Ed, an ostrich who is eager to brood and protect his eight eggs, with fun, animated slapstick action.

Animationweek heard that the sequel to Cracké is in development from Chantal Cloutier, the head of original creations and producer at Squeeze Studio, during the Annecy International Animated Film Festival 2018. In the sequel series titled Cracké Wacky Island, you can dive into the universe for much longer and with more depth than with the first series. You will be able to meet some new characters living in the same island as Ed in the upcoming new episodes. They will prepare two packages for the audience: a 3-minute series without dialogue, and a 7-minute series with dialogue. 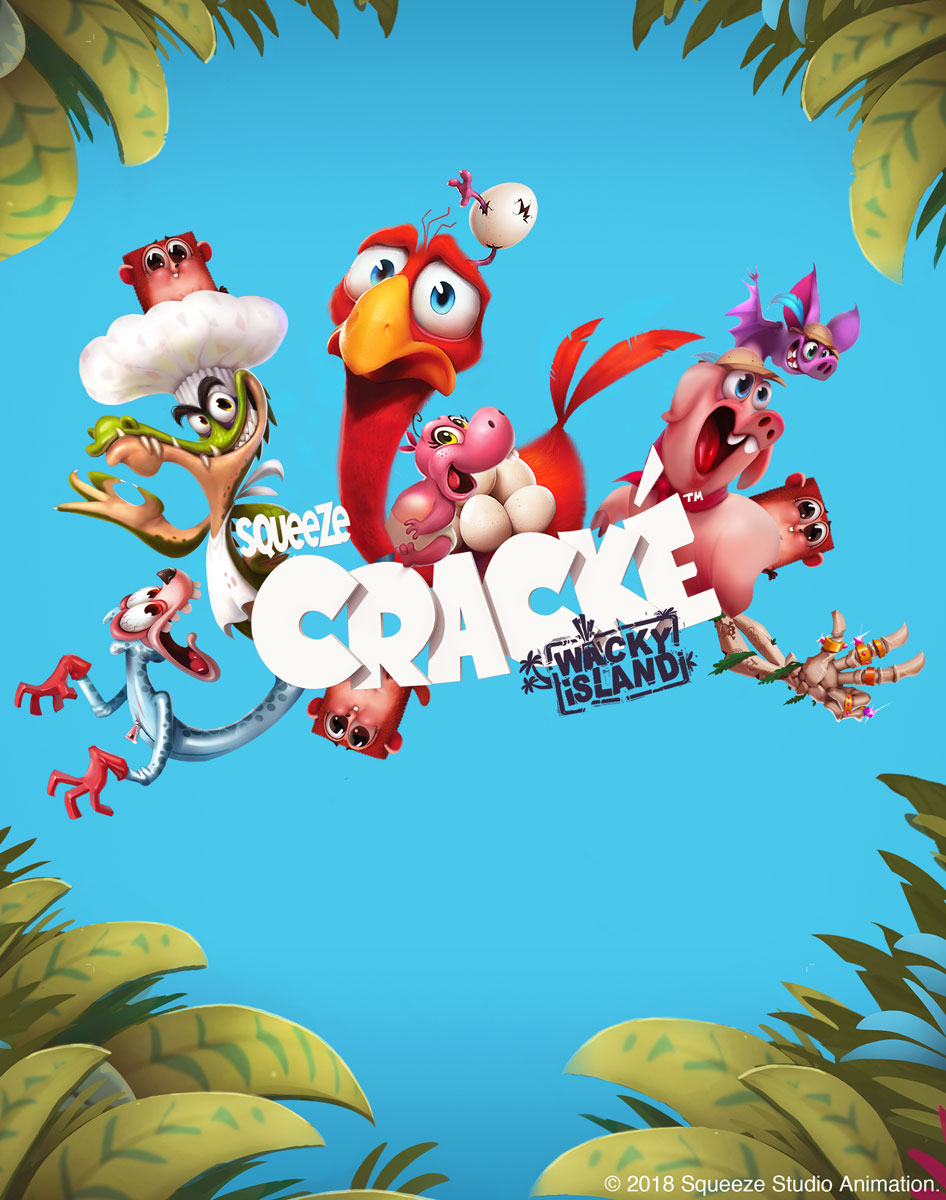 To uncover more about the awaited series, we interviewed Patrick Beaulieu (Chief Creative Officer and Squeeze’s Co-Founder) and Chantal Cloutier.

Hideki Nagaishi (HN): First, I would like to ask you about Ed, the main character from the first series. How did the character start out?

Patrick Beaulieu: The birth of Cracké goes back a long way. I designed Ed the ostrich back in 2000. Initially, Ed wasn’t created for a specific story, but we could tell just by looking at him that he had personality. With his unique pose and his very empathic look, Ed was already moving audiences. At the beginning of the studio, my partner Denis Doré (Squeeze’s CEO and co-founder) and I were both inspired by this very unique bird and this is why we chose to use Ed for the creation of our first original creation. Our objective was to build a very qualitative slapstick show in 3D, which would be ultra-cartoony and inspired by the classics of animation like Chuck Jones and Tex Avery. We started building Ed’s story. For me it was important to be inspired by real life. As I am the father of 4 young girls, it was interesting to build the story around an overburdened father, taking care of several kids. This is how Ed was born. Inspired by my life as a father, but making it much more challenging for him, as he has 8 eggs to take care of, and no one to rely on (with him being a single dad).

HN: The first series is focusing on funny moments during a minute. In Cracké Wacky Island, you can share scenes with the audience for much more than a minute. What new things do you want or aim to deliver to the audience by using the increased length format of 3 minutes without dialogue, and 7 minutes with dialogue?

Patrick Beaulieu: Cracké was a really cool experience! Bringing the slapstick comedy in 3D with our daddy ostrich was so much fun. But, it was also very challenging to create stories for one minute episodes. For Cracké Wacky Island, we wanted to enlarge the universe, dig into our characters and have the opportunity to go further with them. The 3 and 7 minute episode formats allow us to play with slower, quieter moments, mixed with more complex scenes, which brings new layers of emotion to the series. In this new opus, we are bringing new characters who have the opportunity to speak. The dialogues are a nice addition to our 7 minutes episodes, allowing us to add fun moments between the characters, whilst keeping the visual flavor and universal appeal of the franchise. This opens new doors for us to explore for storytelling.

HN: We would like to hear about the universe of the story (the island) and new characters. How were the idea and design of the island and the characters developed?

Patrick Beaulieu: Our objective was to create a universe with several characters based on a classic segment-based structure. We came up with 5 distinctive teams of characters, who all have their very specific motivations and interactions. Each character is unique, with an explosive personality. To bring them all together, the island was a perfect setting, as it allows them to develop their own stories and go through zany adventures, while sharing the same rich environment.

HN: Could you please briefly introduce the new characters?

Patrick Beaulieu: Cracké Wacky Island is home to the strangest, looniest, most off-beat characters ever collected on the same landmass. These hilarious weirdos couldn’t be more different, but they’re all motivated by relatable and heartfelt objectives.

Ed the ostrich, a single dad, desperately protects his adventurous egg Junior from danger. Percy the reclusive panther does his precise chores, but young hippo Mimi‘s hyperactive “help” is his worst nightmare. Boneface is a pirate skeleton enjoying retirement from life, but Winston & Batty steal his treasure. Twin crocodiles Croc & Chef co-host a cooking show, but the talented Chef tries to prove he’s better than wacky Croc. And the adorable Happy Hedgehogs want to be included in everything that happens on the island.

HN: What do you like most about Cracké Wacky Island?

Patrick Beaulieu: What I like the most in Cracké Wacky Island is the opportunity to create… to leave the beaten track, explore concepts, new ideas that will bring a fresh wind to the audience. I love bringing our characters to life, placing them in unexplored contexts, with visual humor. This world offers ultimate freedom to create. That’s what I like the most about this brand and Wacky Island.

HN: What difficulties did you meet through the development of the project so far, if you have any?

Patrick Beaulieu: Presently, on the creative side, there are no real difficulties to tackle this project. We are excited about this universe and are inspired by the characters. Working every day on Cracké Wacky Island is just real fun, we enjoy every second of it! Since we started the studio, our ultimate goal has always been to tell amazing stories involving unforgettable characters through quality 3D animated content. We want our characters to stand out from the crowd. To make an impact. This series is about that.

HN: Could you please let us know what stage your project is at now? And if everything goes well, when can we enjoy the series?

Chantal Cloutier: We just finished the development phase of the series, going into production shortly. The delivery of a first portion of the series is scheduled for Fall 2019, while the last portion will be completed and delivered by early 2020.

04. “Chuck Steel: Night of the Trampires”; under its skin with Mike Mort

06. Behind the story of “Cracké Wacky Island”