AW: Let us know the design process of the characters in the film.

Mats Grorud: We had Rui’s design for the 2D parts from a very early stage, but then he was working on his graphic novel, so at the time we were developing the puppet part in Poland.

Then there were these beautiful puppets that we made in Poland, but there wasn’t yet the link between the 2D and the puppets. So, in the development stage, not that we were unable, but maybe we were not conscious enough of how we were going to combine the two worlds, so they turned out quite different.

After Rui finished his graphic novel, Lanterns of Nedzu (which is a beautiful book!), we were able to sit down and figure out what should we combine in the 2D and puppet part for the character design, and we found some rules: We needed some strong visual links that you immediately understand. For example, having something just be the 2D version of the puppet world. We found, and I call it Rui’s “beautiful ugliness”, that I’m really fascinated by these beautiful drawings that are a little bit ugly, and I think the eyes, the shapes of the eyes, the mouths, and the nose, were very characteristic.

We wanted something that was unique to this film, and we didn’t want something that was too polished. I find that a lot of animated films based off illustrations just come out of the machine of animation companies. It becomes slightly boring, because it’s too polished, it looks too nice, and too beautiful, and you’ve seen it before. It takes away the uniqueness of what you had in the illustrations.

To transform the 2D elements to the puppets, we drew some lines instead of seams, and the characters have quite outlined eyes. We wanted to keep the beauty and physicality of the puppet world with the textures and the details of what’s real, so we had to find a step in-between, with some things being two dimensional in the puppet world, but not too much.

Hefang Wei: For the 2D part, Rui’s personal style is really flat, the line’s really smooth, and he uses flat colours, then he puts textures, which makes the 2D a powerful contrast against the realism in the puppet, which makes it feel quite close to reality for me.

Rui Tenreiro: I think there’s several things that you want to say in the film because, as you say, you have a lot to say. But I think one of the things that you wanted to do was to humanize refugees, not just make a political film about something far away. Mats worked with a subject that was very close to him, which was people that he knows, directly, and he sees those people.

When we talk about refugees, or people that we don’t know, it tends to be this abstract, distant thing, and one of the tasks of working on the visuals was to provide a human face to the refugees. Not just to present it as something that is suffering and that is far away, but something that is close to you and that is human, and that consists of real people Mats knew and lived with for one year.

In interviews, I’ve heard things I’ve felt were really strong and powerful, and one of the things an interviewee told me was: “You know, in the end, Jerusalem was just a city. Let these children play.” It’s not that Jerusalem is not important, but his message felt very strong. Come on! We are 40,000 people living here, and this doesn’t work, it’s not fair. People should be allowed to live. That’s it. Let people live a dignified life, and this is what we wanted to show in the film. What’s the dignity that people do have? It’s just how you portray people.

Rui Tenreiro: Speaking about portrayal, when we were developing the animated characters, one of the things that Mats kept on telling me was: “You know, these people have nothing. They have some things, but they have very little, and they take what they can get to have their daily life”, but there is another aspect, which is that they carry themselves with dignity, and they have a sense of belonging to a place that is dear to them. Their origins that has been kept alive through spoken history.

One of my tasks was to carry that through the image of the characters. Not just throw some clothes on, but to present the design of the characters in a way that would be beautified, to beautify Palestinians. Maybe someone has a sense for style, and some guy likes to wear flip-flops. People have different choices, just like the people in the camp.

To represent the people of the camp, we also worked hard to not represent stereotypical Arabs. The Palestinians have come from this land that throughout history had people come from all over the world to what was called Palestine. There are Palestinians who have green eyes and who have brown eyes, including different shades of brown. Some have reddish hair. You find that it’s not just this mass of people that all look the same, it’s really diverse. I hope we managed to show that.

It’s also the image of the refugee, like with torn pants, etc. People don’t have that. It was a difficult task to show people living in a difficult condition, and at the same time, showing that they wear very nice clothes. But then, when people see the film, they feel that there is no problem in the economy, since they look so nice. It’s the same with then camp; people hate the camp, in some ways, and at the same time, they love the camp, it’s their home. But they’re stuck in this really, really bad situation in exile, forever as refugees through generations. Still, it’s their camp, their home. They have this other home that they were forced out of, which is so important to their identity. These were all the things that we wanted to show in the film. 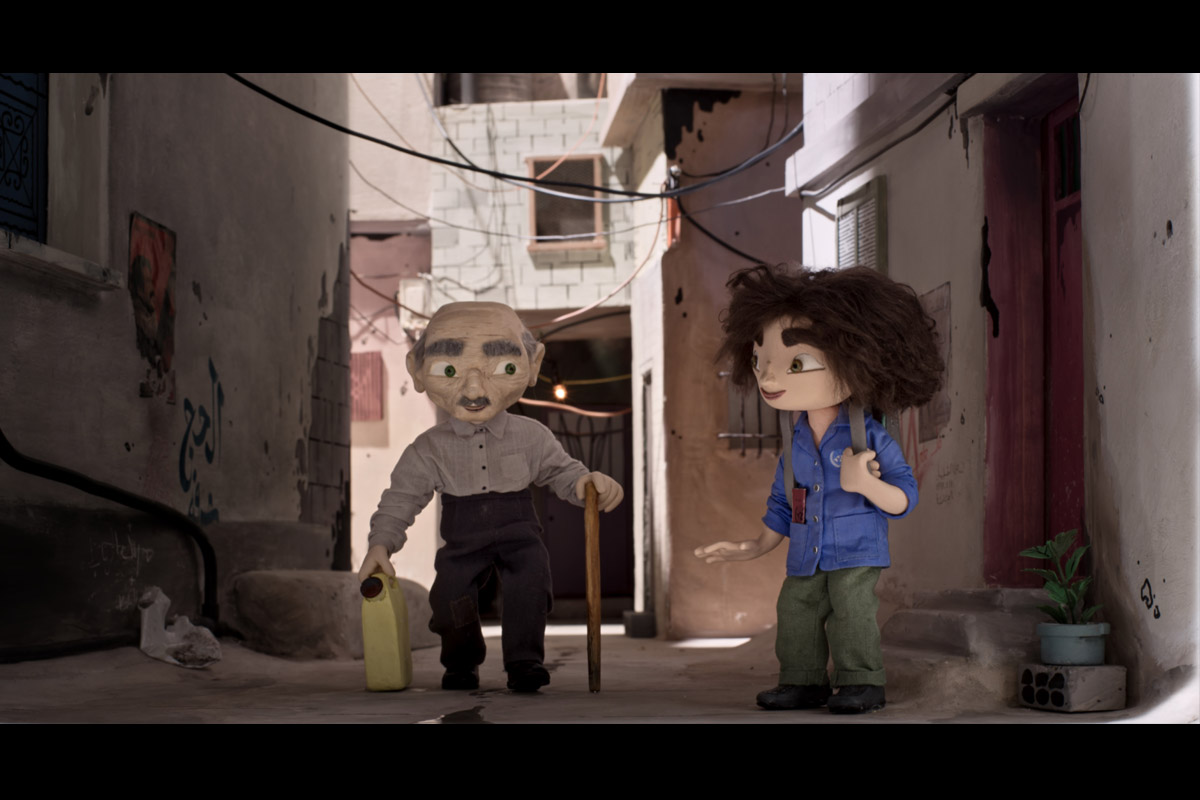 AW: So, what I thought after listening to your story of making the visuals was that people tend to have visual stereotypes of everything, but when people watch the film, the audience would not see those stereotypes with the characters in the film and instead relate to them. For that, you took care a lot not only the storyline but also the visuals, right?

Mats Grorud: Sure, but also, for example, we did the same with the music to find a balance. I love Arabic music, but if we had a soundtrack that was very Arabic-sounding, it could, or we thought it could, make people think “Oh, it’s a film from the middle-east. It’s not something that it’s about us.” So, we wanted to find a soundtrack that made people relate to the characters. So, it does have oriental scales, but it’s also European music or a classical approach.

Hefang Wei: Because those two kinds of music have different functions. You have Arabian music for the Palestinians. That kind of music can make you feel that you’re there, but that is not enough to let the director or filmmaker show the context of the scene, so you can put another group of music that highlights your feelings or allow the audience to understand.

Rui Tenreiro: It’s true. I worked more visual, and you guys worked more in a directorial capacity, and you’ve worked together to make the characters have emotions so that you know to make the characters have a response, an emotional response on the screen. So, you guys more-or-less collaborated in directing the drawing, if you could say the drawn actor, to have an emotional response, which is separate from what I was doing. Connected in some ways, but not totally. It was more directorial decisions. It was just interesting to see.