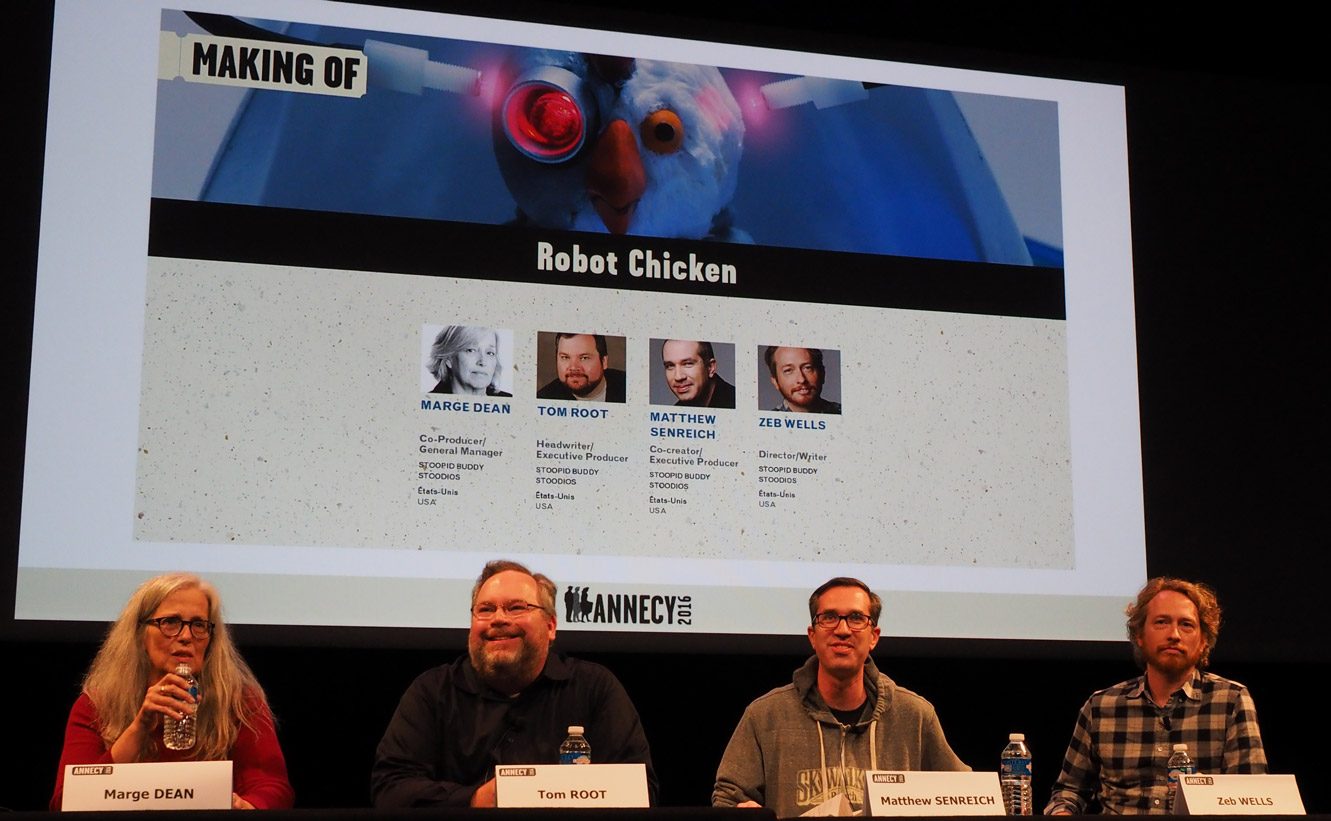 Robot Chicken is an Emmy award-winning animated sketch comedy series. It now spans 8 seasons, 160 episodes and 6 specials, which have been broadcasted on Adult Swim, a programming block (from 8 pm to 6 am) of Cartoon Network, an American cable network. Stoopid Buddy Stoodios (Matthew Senreich, Seth Green, John Harvatine IV and Eric Towner are the founders) are behind this successful and hysterical animated series of Robot Chicken as a stop motion animation using a lot of different toys.

After this Q&A session, we had a special interview with Matthew Senreich and Margaret Dean. They share the behind the scenes of Robot Chicken. 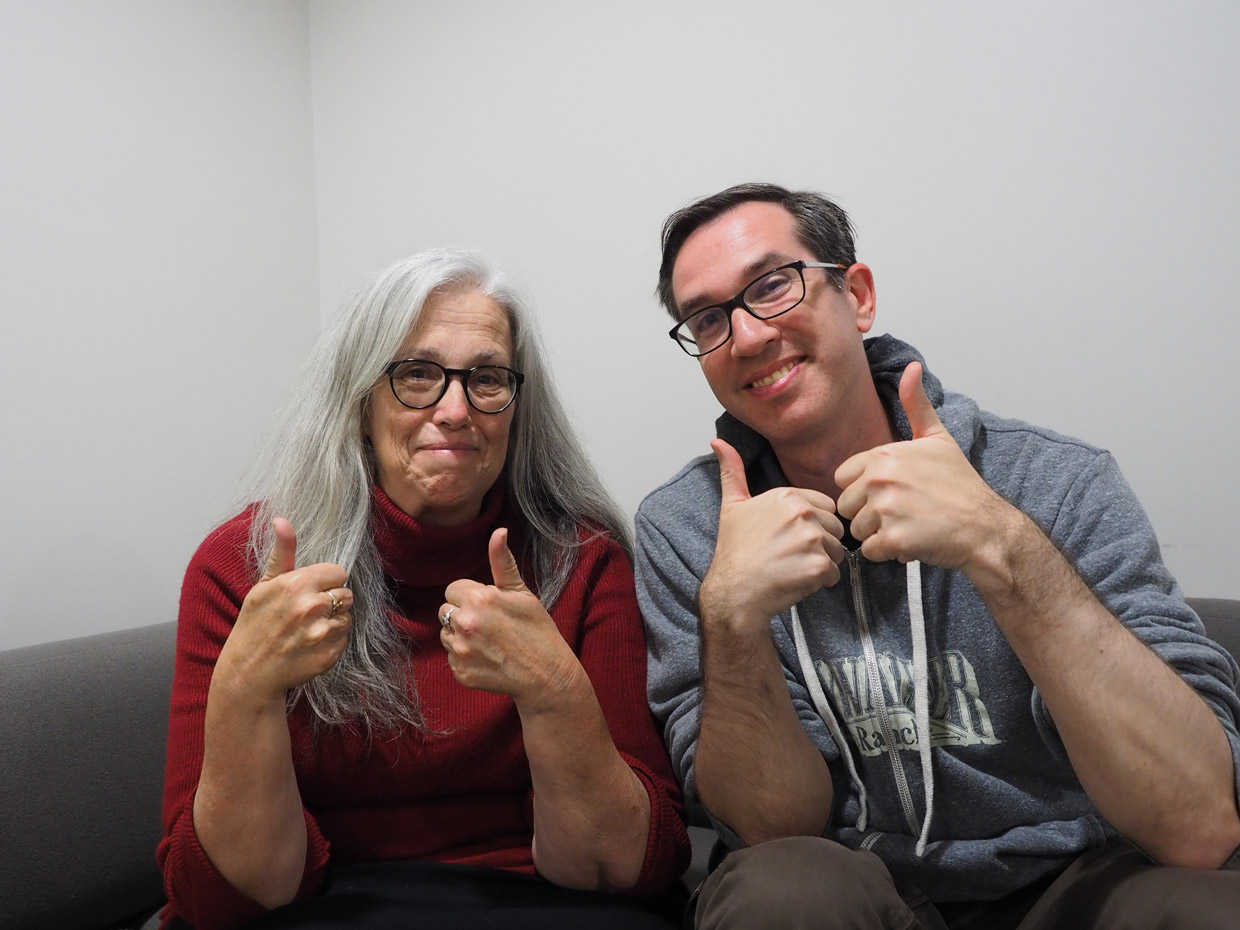 Animationweek (AW): How and who came up with the initial idea of the TV series <>Robot Chicken? How did you get the chance to make the series and the broadcast?

Matthew Senreich (MS): It all started with a friendship with Seth Green. I worked in comic books and Seth was my partner for it. I worked in New York on Wizard Magazine, a magazine about comic books, toys, and video games, as a journalist weirdly, and Seth was a fan of the magazine. So, I had met him through the magazine, I interviewed him through the magazine and we became friends. I lived in New York, whenever he would visit New York we would hang out, whenever I was in Los Angeles we would hang out.

One day he called me up and said, “Hey, I have to do a talk show, Conan, and I have nothing to talk about.” I thought about animating a little short of my action figure, and there was an action figure of Conan O’Brien. And he said, “We’ll put them on an adventure, and shoot something in stop motion, do you want to do this with me?” And I said, “That would be amazing, except I know nothing about stop motion.” He said, “Can we figure it out?” And I said yes. So, we started putting it together, we enlisted Tom Root, who I worked with in New York and we enlisted a bunch of other people. We ended up putting together a first episode and as we were doing it… It was 1999 when digital was just becoming important. Sony had heard, somehow, that we were looking to make short-form content, and they paid for us to do 12 animated shorts. We did 12 shorts 2 to 4 minutes long for Sony that no one could watch, because it was dial-up, and we used that to then sell. We had 45 minutes of content by the end of that, that we could use to shop around to all the networks, and Adult Swim had seen it and they bought it. It was a whirlwind, it took us four years to get it on TV.

MS: Four years to get it on TV. It was a long, long journey, but it was fun. 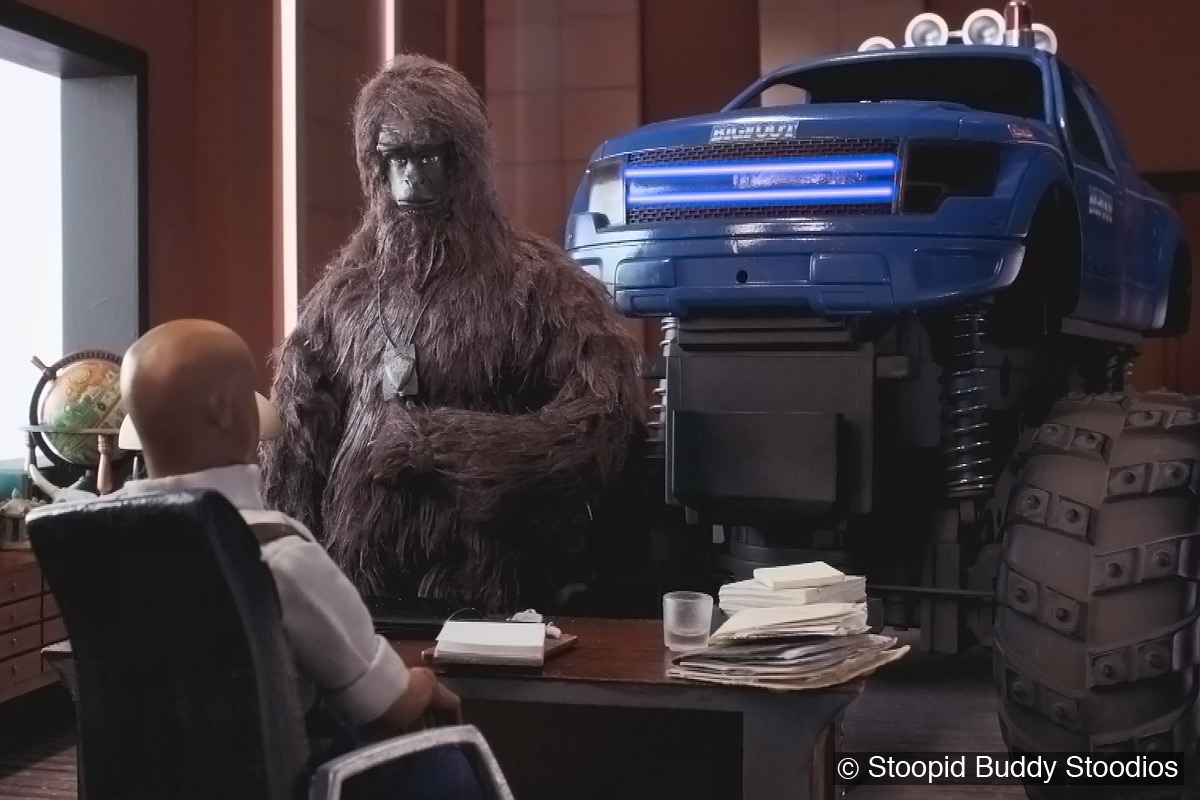 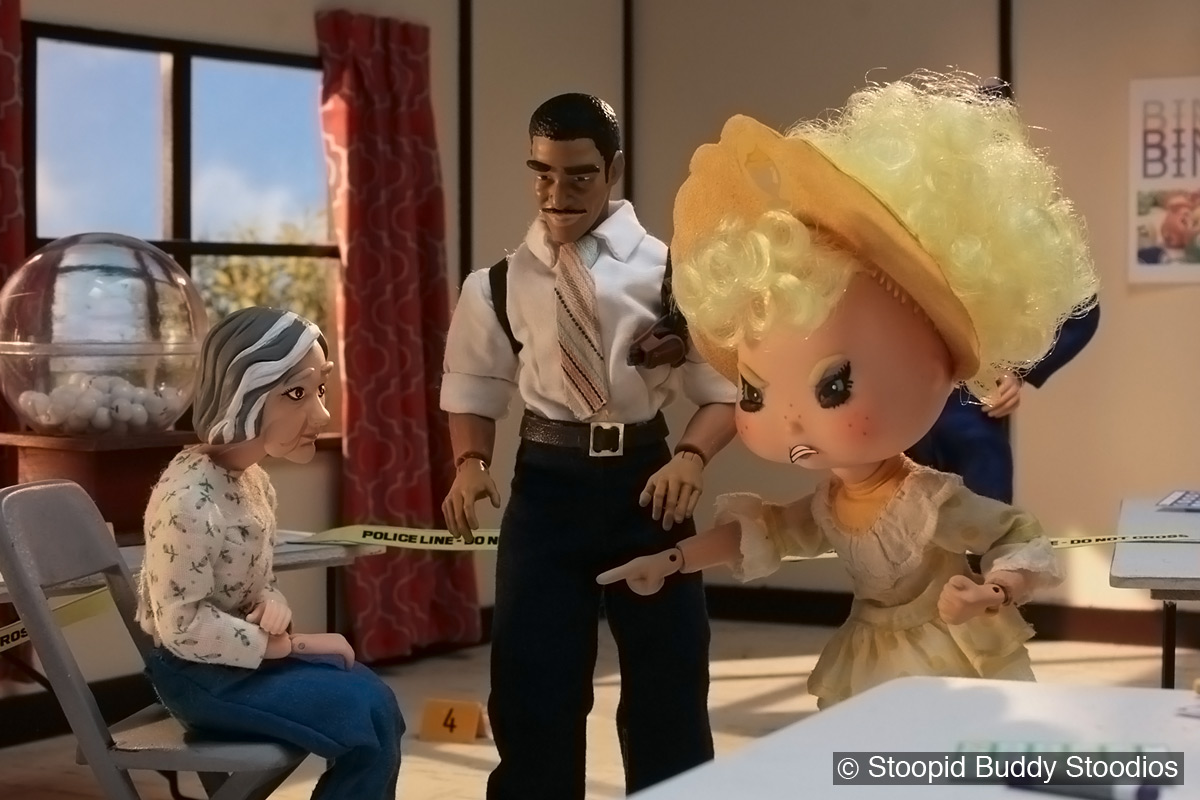 AW: By watching some of the excerpts, the parody is a really fun part to watch. How do you decide on the topic and the theme of each episode? How do you find out “okay, this is going to be fun”? Where do you get the sense?

MS: It’s about making each other laugh. We, friends, having fun with each other and seeing what the others laughs at. It started with myself, Seth Green, Tom Root, who is on the panel, and Doug Goldstein. And the four of us sat in a room and if it made us laugh, we would write it down – it was just that simple, and the four of us would vote. If we came up with an idea, it had to be three to one, and three to one means it’s in the show. Two to two – a tie, it’s not funny enough. We’ve kept that model. Now, as we’ve grown and more writers have come on but it’s still the four of us voting on every sketch. It has to be three to one to get in the show, otherwise it gets thrown away. It’s a process most of our other writers hate because they don’t get a vote (laughs).

AW: It’s not like targeting a global market when you make each episode, is it?

MS: No. We’re not targeting anybody, we’re not saying we have to do something like this, we’re geeks. We play with toys, we see toys, we like them, and we buy toys. We go to Toys R Us a lot. If we’re playing with a toy, we’ll think of something funny, or we could just see something on television that triggers us to laugh. It could be us talking about a movie we just saw, or a movie we remember from 1985. Whatever it might be, we’ll start laughing and then we start to write it down.

AW: Okay. It is like the idea comes in and then start creating.

MS: Very basic, yes. But again, it’s all about playing with toys.

AW: Didn’t you mention that you don’t write storyboards at the Q&A session?

MS: We do storyboards, but not until after all the scripts are written. After the scripts are all written, we will then hand it to a storyboard artist, who will then storyboard it out, and we can see what it will look like. We just don’t take into consideration the storyboard artist or the animators when writing it. We write it no matter how complicated it is, we will write it and then figure out how we’re going to shoot it later. It’s very insensitive of us as writers.

AW: So the writing comes first.

AW: Robot Chicken has been a really long successful series. How do you keep yourself fresh and get new ideas?

MS: We bring in new writers. The core group is always the same, it’s still the same four of us who started the show, and then we rotate in everybody else. But we like to find writers who haven’t worked on anything else, we still find them funny, we find them to have ideas we would never have thought of, and they’re not from the entertainment industry who would do what they’re supposed to do. I don’t want what we’re supposed to do, I just want what someone will think of and make them laugh at the very basic, and then we can build them into how we do things, which is very different to every other shop. But also as a sketch comedy show. Do you know Saturday Night Live?

MS: It’s sketch comedy. It’s just about constantly doing new things and just trying to keep having fun as best you can. There are a million sketch comedy shows that are out there, the only difference is, instead of people, we don’t have recurring cast members. I can get any toy I want, I can get any person that I want, because they’re little action figures. I can be that Saturday Night Live, I can be Monty Python, so we can be every sketch show that exists, just in puppet form. 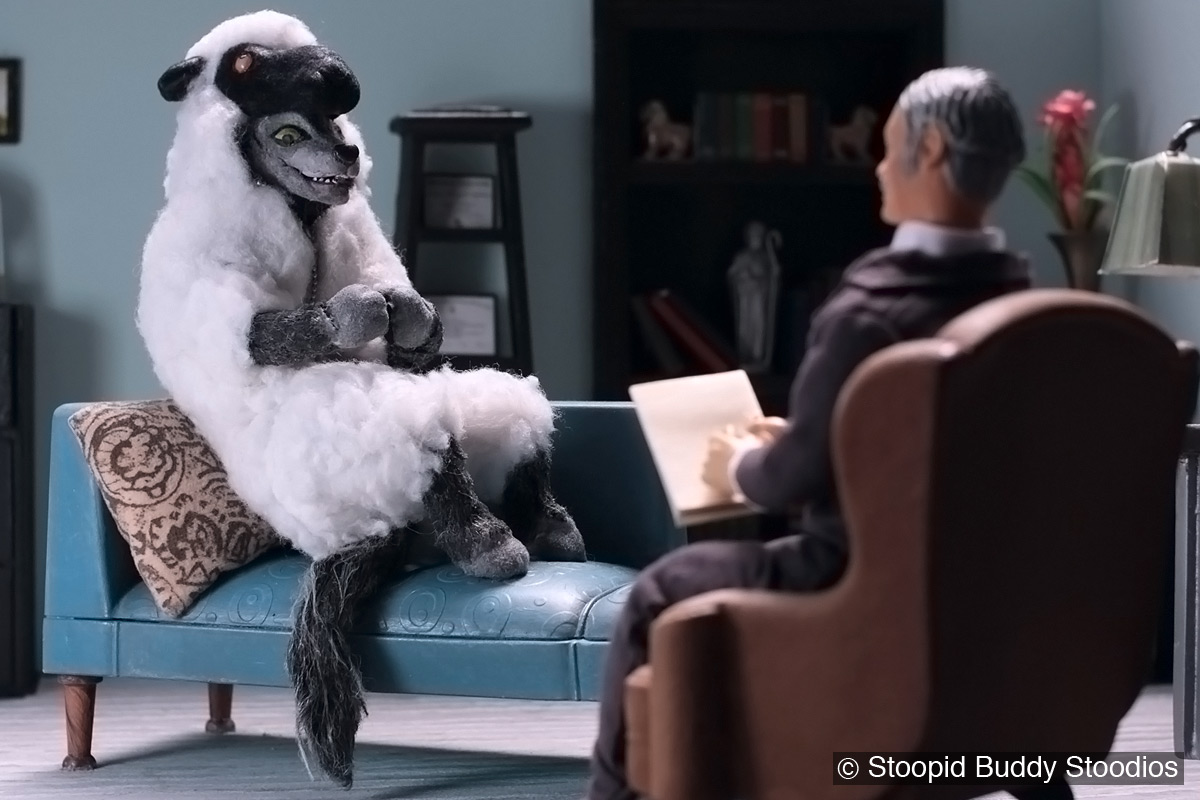 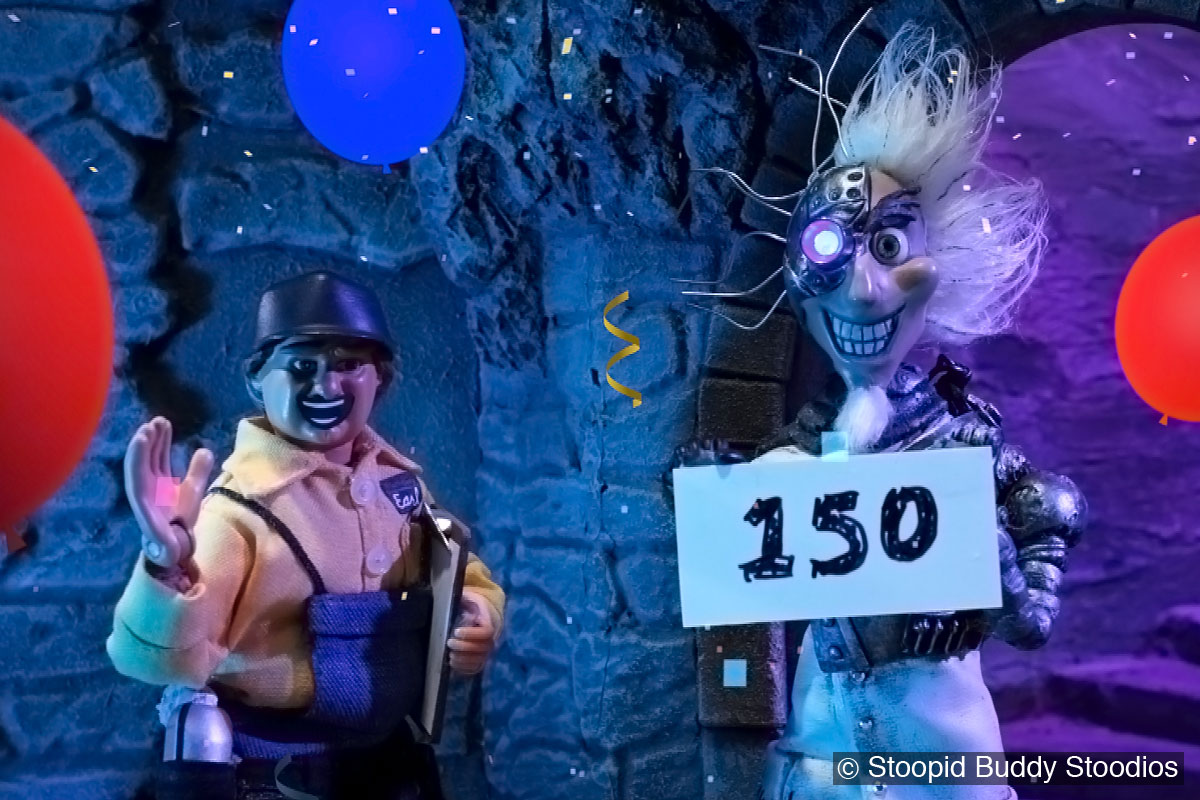 Margaret Dean (MD): Often we’ll need multiple puppets, because we’ll shoot the same character on many different stages in order to stay on schedule. Especially if it’s a special like the 80s He-Man, we can’t get 15 of them to put on. My point is, that sometimes the toys are not available to us, the quantity that we need to be able to get them into production.

MS: Also we have to rebuild probably 120 toys per week in-house. We need the talented puppet department to be able to build them all, make them do the things that they’re going to do, build multiple versions of each one and they break a lot on stages. They have to fix things as everything’s moving at the same time – it’s a magical department. They’re Willy Wonka and the toy factory, except it’s puppets. It’s amazing what they’re able to produce.

AW: That sounds amazing. What did interest you to make stop motion animation?

MS: It was all by accident. I didn’t know anything about stop motion. I love stop motion, it was in Star Wars, when it was in Clash of the Titans (1981), I loved it but I never expected myself to do it. I fell in love with it when we started Robot Chicken. But what I loved very simply was the idea of my toys coming to life, that’s what hooked me into this world. I started in comic books, my first job was at Marvel Comics, I was an intern, photocopying beautiful art pages coming in from Jim Lee and Todd McFarlane, and these amazing artists, and they opened the door to me, to this world that I never expected to be a part of. I got very lucky, I never thought I could do this, I always wanted to write but I never thought I could. I was going to be an accountant, I was a history major, I had no idea what I was going to do with my life until my first day at that internship at Marvel Comics.

AW: Are there any differences in terms of storytelling? What do you think is the strength of stop motion?

MS: Yes. I think stop motion is tactile, you can touch it and it has depth. Again, when you’re looking at something in CG or 2D, it’s all still on flat paper or flat on the computer. The fact that there can be a toy here and something way back there in the distance, it’s mind blowing! And these things somehow, which are still and have no life, start to move – how does that work? And that’s what I find so brilliant. Yeah, it’s mind blowing! Any time I see a beautiful stop motion video it makes me pause.

MD: I think the tactile nature gives a warmth that people like. And CG still has that cold feel. It does really well when you’re doing metallic kind of worlds, or futuristic kinds of worlds. I mean it does okay at some things, but there’s something, the warmth that comes out of the real material, I think, makes a huge difference for the stories that require that.

MS: Yeah. I’d like to think that this could happen in your own home.