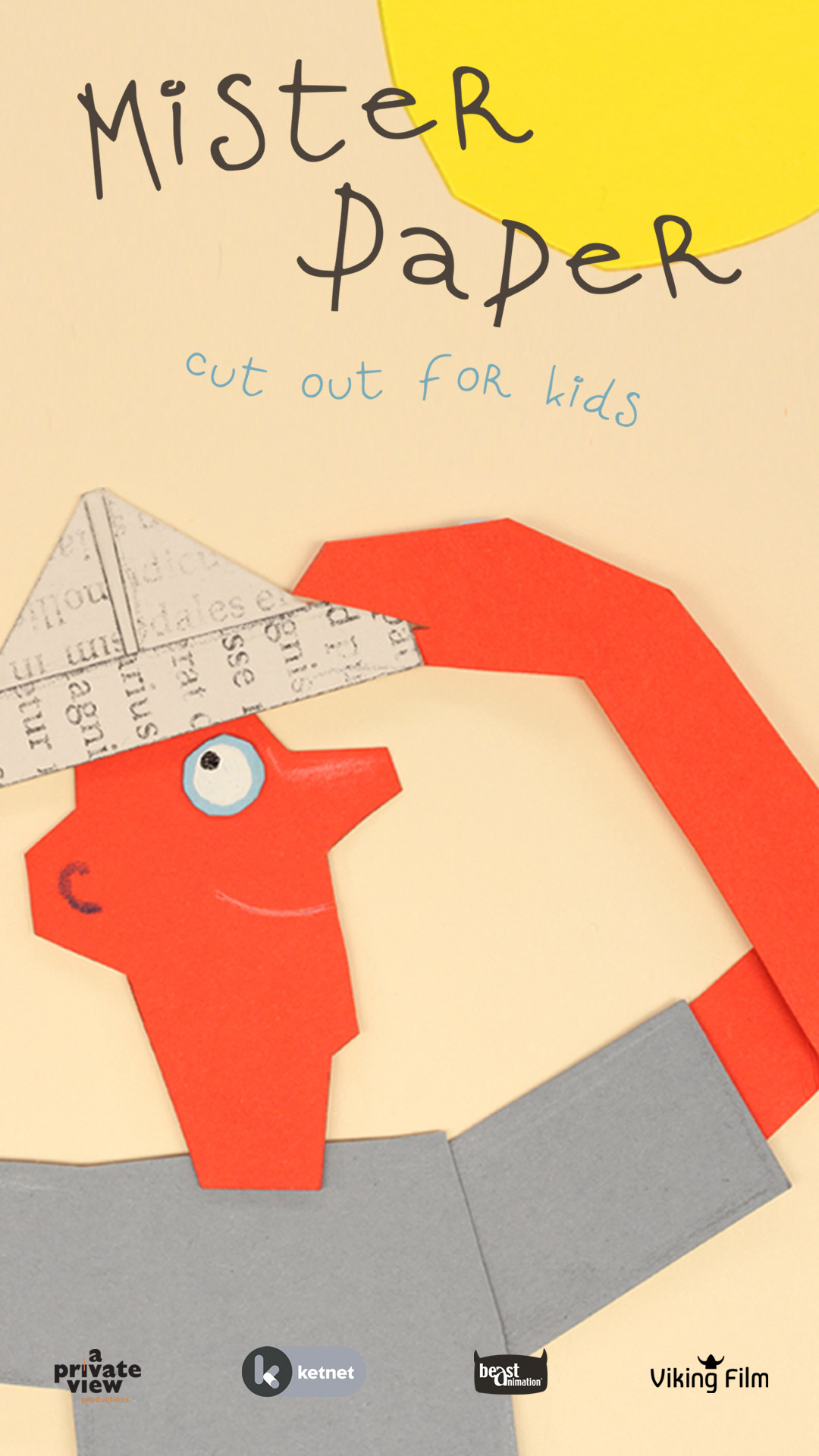 Mister Paper cuts and sticks together the world that he wants. He lives in a paper house surrounded by paper nature. His sole companion is a cat. But thanks to his scissors and his childlike imagination, he is never alone. For every situation, Mister Paper creates a solution by cutting or pasting something new. He cuts a bottle when he’s thirsty and an apple when he’s hungry. Or he cuts a cow, so as to have some milk for the cat. And when the cat doesn’t feel like playing, he cuts a dog or a girl to take a walk with. Through his adventures, the world of children is brought to life in a playful, imaginative manner. A world, rooted in reality, where anything is possible. 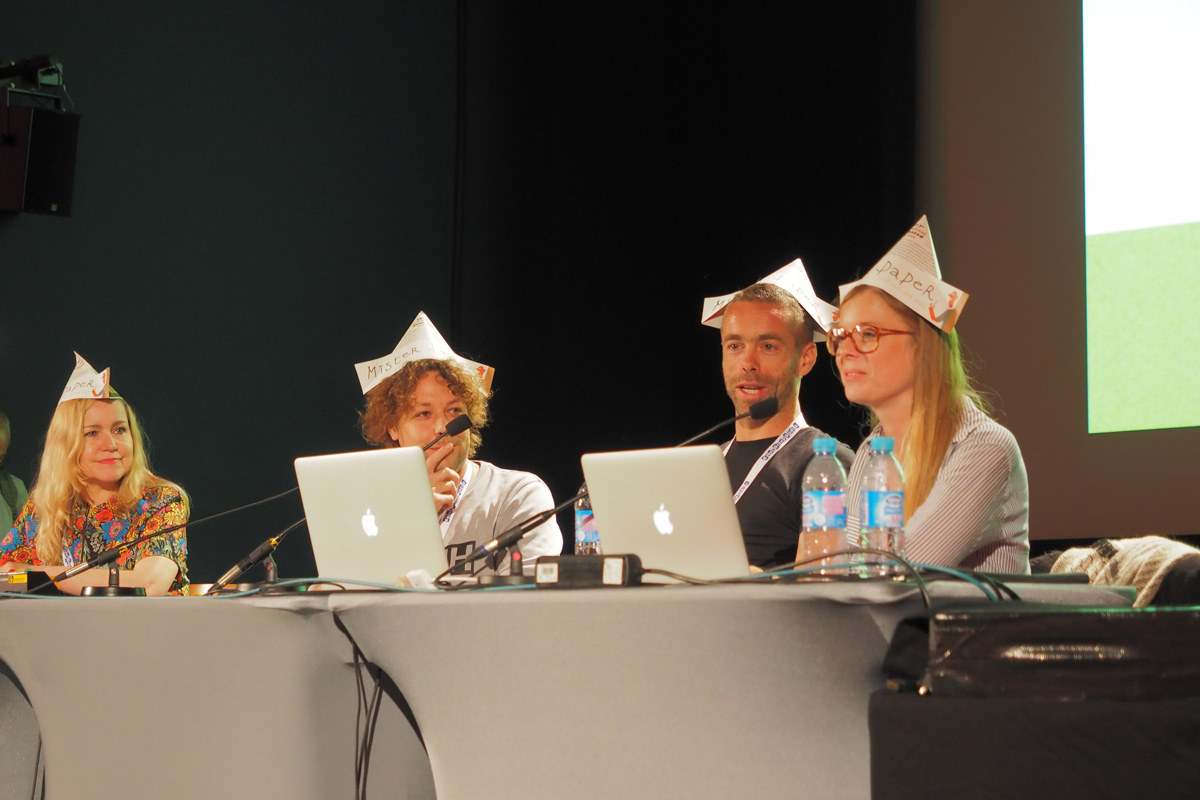 We were touched while watching the trailer of the Mister Paper at Cartoon Forum 2017 during their pitch because it’s a perfect combination between the universe of the story and the cut out animation technique. It’s a story of Mister Paper who lives in a world where everything is made up of paper and cardboard. He can create everything that he may need by cutting papers and cardboards with his scissors. If he cuts out a bird or a fish from a piece of paper, it would get alive. The visual of the universe is simple and flat and it gives us the reality of the paper world. We look forward to the completion of this animation series that will stimulate children’s limitless imagination.

Interview with the director and producer

Animationweek (AW): How did this project start?

Karlijn Van de Cruys: We started with a short film: Mister Paper goes out for a walk. While producing this animated short in 2017, we decided to also get started with the creative development of an animated series starring our little paper hero: Mister Paper (26 x 7’).

It was actually graphic artist Gerda Dendooven who got in touch with us about 2 years ago, because she was toying with the idea of making an animated film around Mister Paper, a picture book series that she created together with writer Elvis Peeters: Mister Paper. We immediately believed in the potential the stories have: they are tender and honest, but also peculiar and intriguing. On top of that, Gerda’s illustrations that accompany the text are wonderfully dynamic and seem to be begging to be brought to life.

We contacted Ben and Steven from Beast Animation as directors. The graphic style of the books is so close to their familiar territory of stop motion animation and they love these books. Mieke de Jong is writing the screenplays based on the original books and on new stories written for the series by Elvis Peeters and illustrated by Gerda Dendooven.

Complementing this amazing artistic team are our co-producer Viking Film from the Netherlands and our coproducing broadcaster Ketnet (VRT).

The series received development support from Creative Europe through our slate funding and we just received production support from the Flemish Audiovisual Fund – Mediafund.

AW: Could you please let us know your first impression of the original book?

Steven De Beul and Ben Tesseur: We already knew the original books for a while. We both have children and we often read out loud of these kind of books, where handwritten texts are combined with vivid illustrations. When A Private View asked us to think about a possible animation movie/series, we started to look at the books with different eyes and discovered the limitless possibilities of the Mister Paper world. 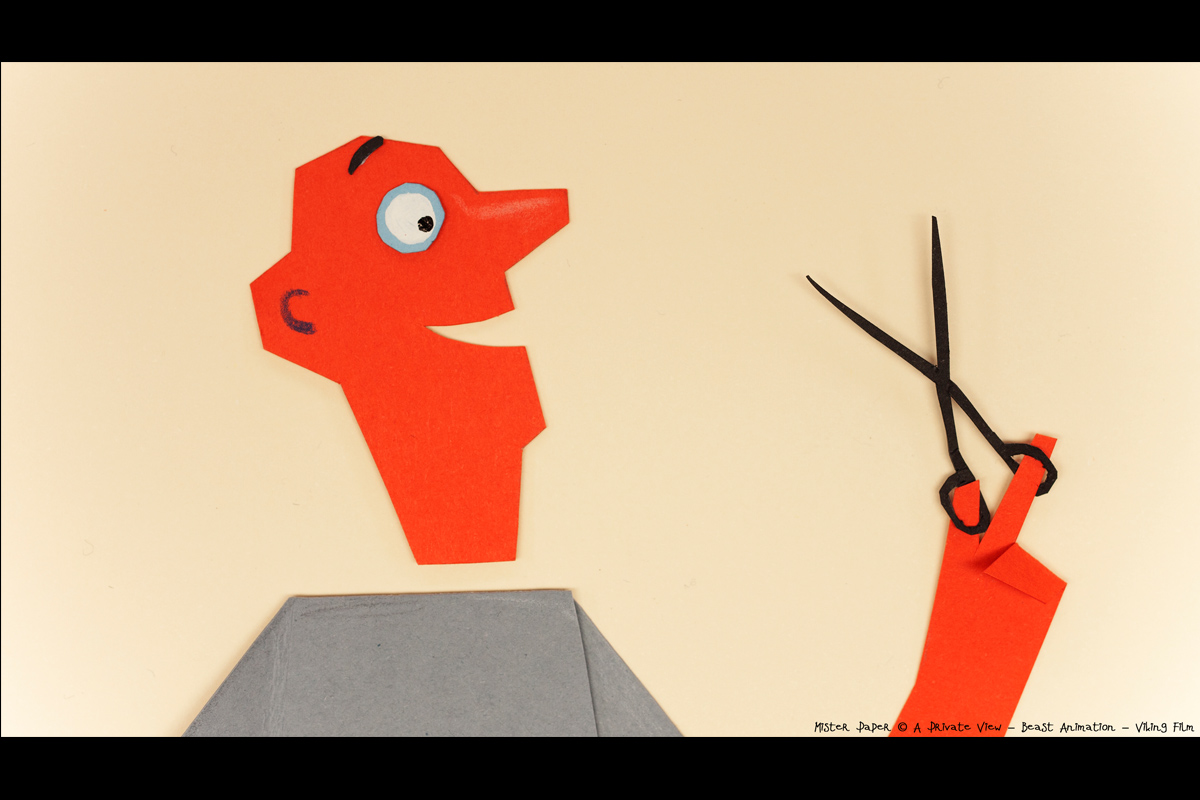 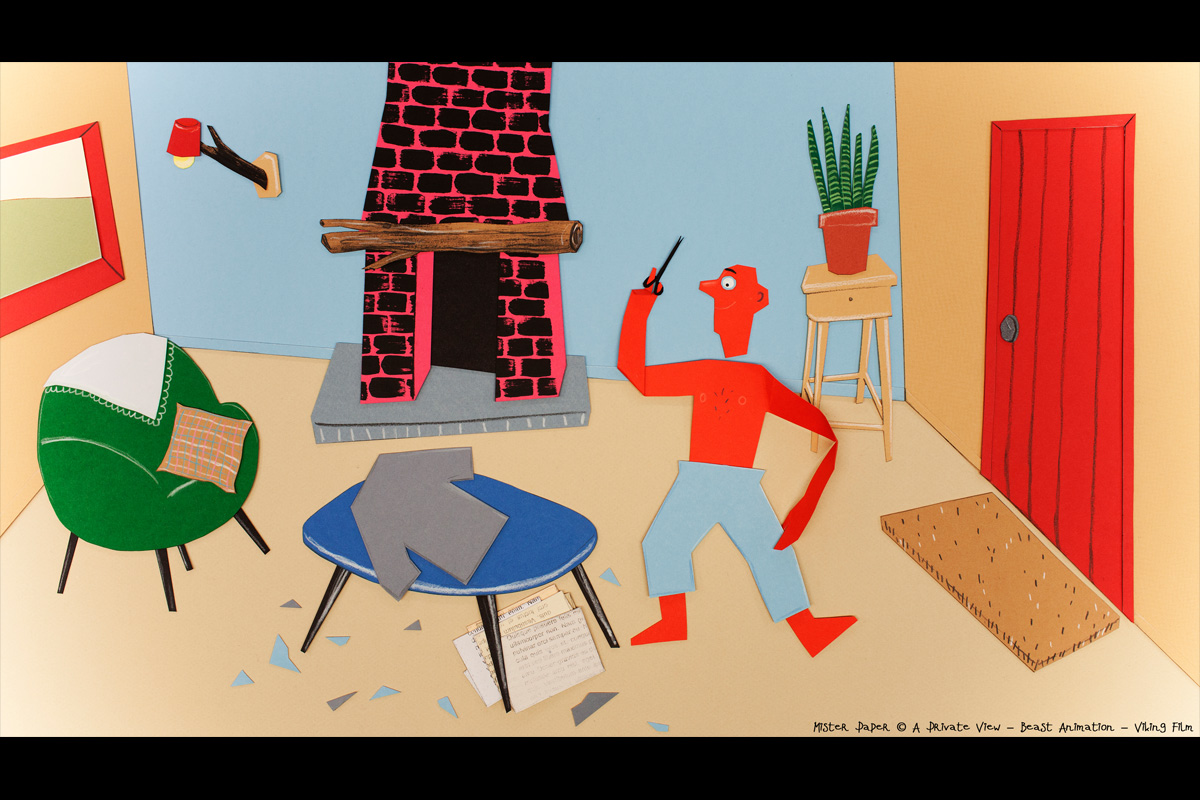 AW: What kind of new things are you aiming to express to transform the book into animation, a different medium?

Steven De Beul and Ben Tesseur: The books are the books, and they really stand alone. When we want to transform a book like this into animation, we try to empathize with characters and their surroundings. We will then really look for ways to convert the ‘static’ book into a moving image. This is about translating the written text and the illustrations into a story arc that works for a (short) film. But it is also about the movement and characters. For example: how does our main character walk or run when he is angry, when he is sad, when he is happy….

And how does our character sound? How does his world sound? Which music suits this best? And with what instruments should that music be played? All of these are things we like to think about and look for when we convert such a book into film or television.

AW: What are you aiming or expecting how children would react or feel anything from watching this animation series? In front of children, who are watching the animation on TV, papers cut by Mister Paper get life and start moving. I think that it’s a really exciting and attractive moment for the children.

Steven De Beul and Ben Tesseur: That is true, it is an exciting and attractive moment for the children. And also for their parents.

The nice thing about Mister Paper is that you never know what he is going to cut, it’s always a surprise. The stories are also constructed in such a way that you never know what is going to happen. This combination keeps it exciting and fascinating for viewers. And it would be fun if children, after watching a Mister Paper episode, would start working with scissors and paper themselves. That Mister Paper inspires them to let their imagination run free and create their own stories and characters. 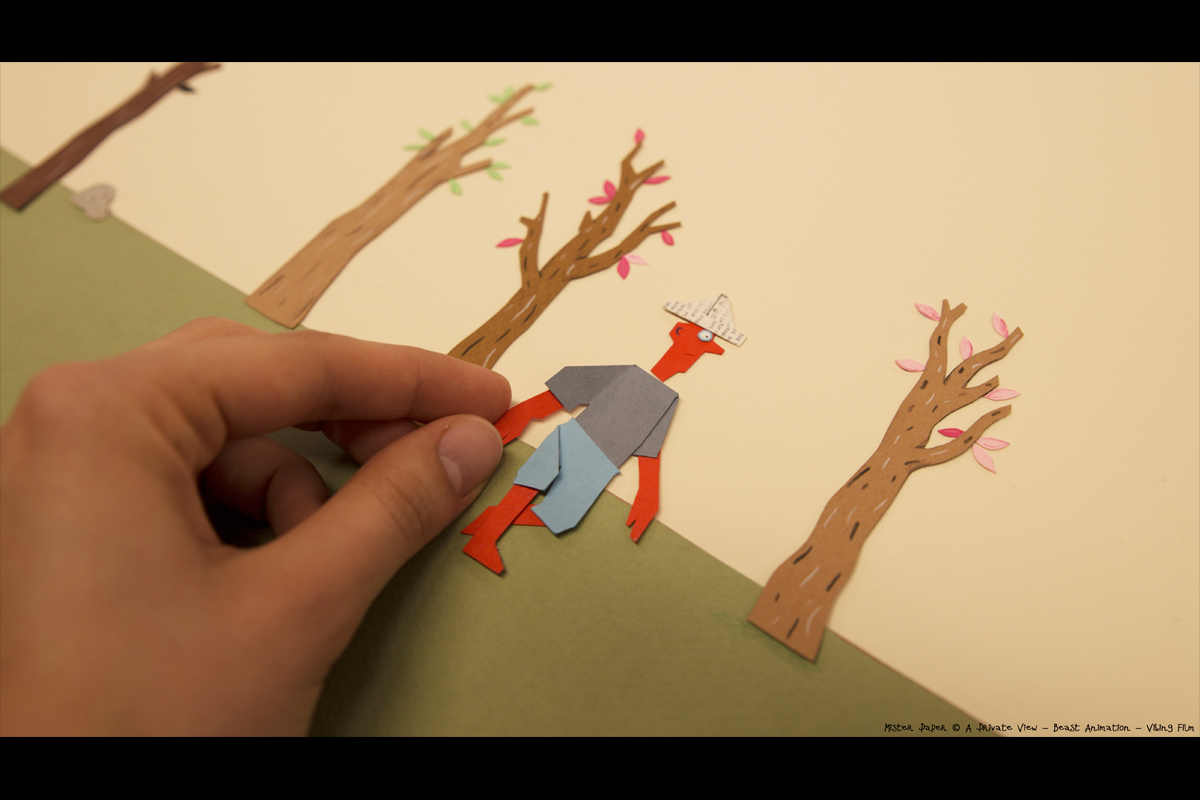 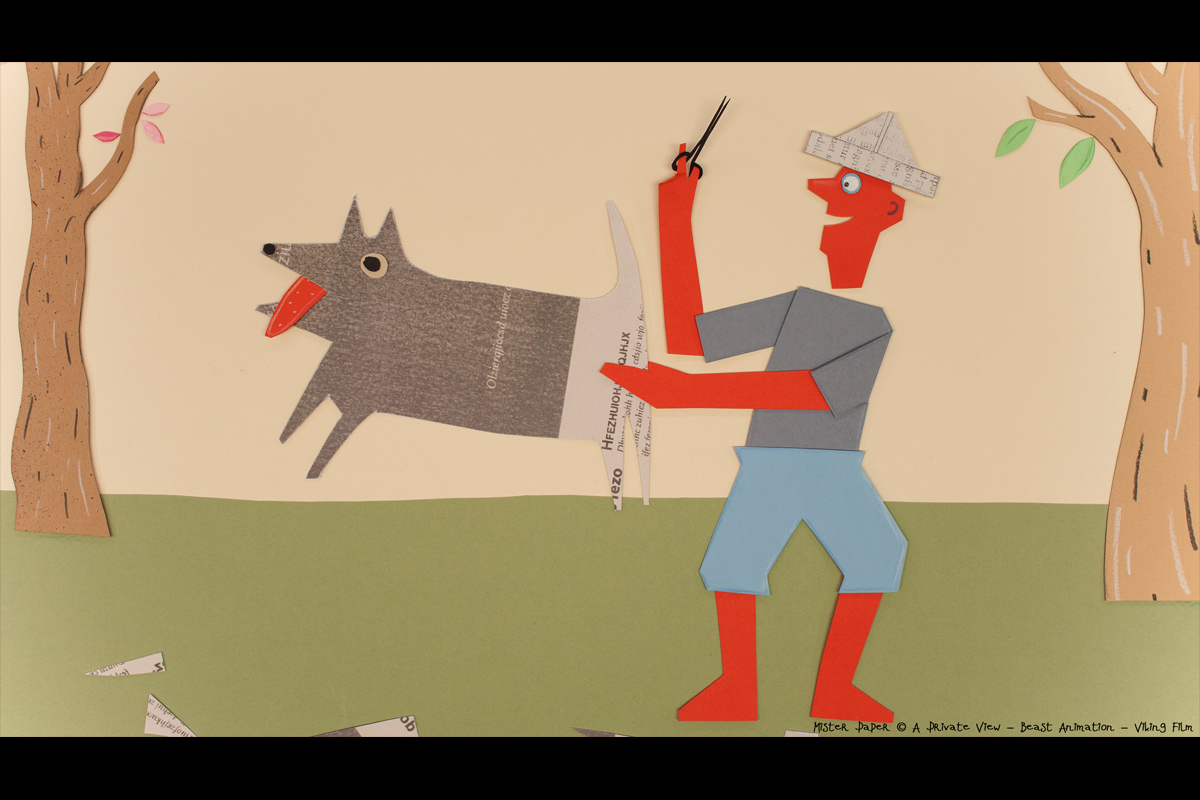 AW: Do you have any favorite scene or episode of the animation series project at the moment?

Steven De Beul and Ben Tesseur: We can’t reveal too much detail about the project. But we especially like one episode about Mister Paper meeting his grandfather, who has passed away. They sit together, talk and eat something. At the end, they express their gratitude to have been able to spend some time together again. This is one of our favorite stories so far because it plays with a subject that is rarely talked about in children series, namely death. And it’s even more uncommon to approach this theme in a positive way, as a natural part of life. The story has a gentle flow and is heartwarming, because in essence it is about real friendship.

AW: Are you looking for any support for the project now, such as co-producers for financing or production or broadcasters?

Karlijn Van de Cruys: Yes, we are looking for suitable and interested partners to get the series financed and ready for production. Broadcasters, distributors, sales agents and co-producers that like the project and want to join.