A young boy named Michael is taken by his family on a round-the-world sailing trip. But when a storm strikes, Michael and his dog Stella are swept overboard and washed up on a remote island. They struggle to survive, but one day Michael wakes up to find fresh fish and coconut milk by his cave. He discovers his mysterious benefactor is Kensuke, a former Japanese soldier, creator of a treetop kingdom and protector of the orangutans. Slowly, by communicating through drawings rather than words, Michael and Kensuke form a friendship. But something threatens to destroy the fragile world Kensuke has created. A thrilling adventure story with a poignant message that will resonate with audiences across the world. 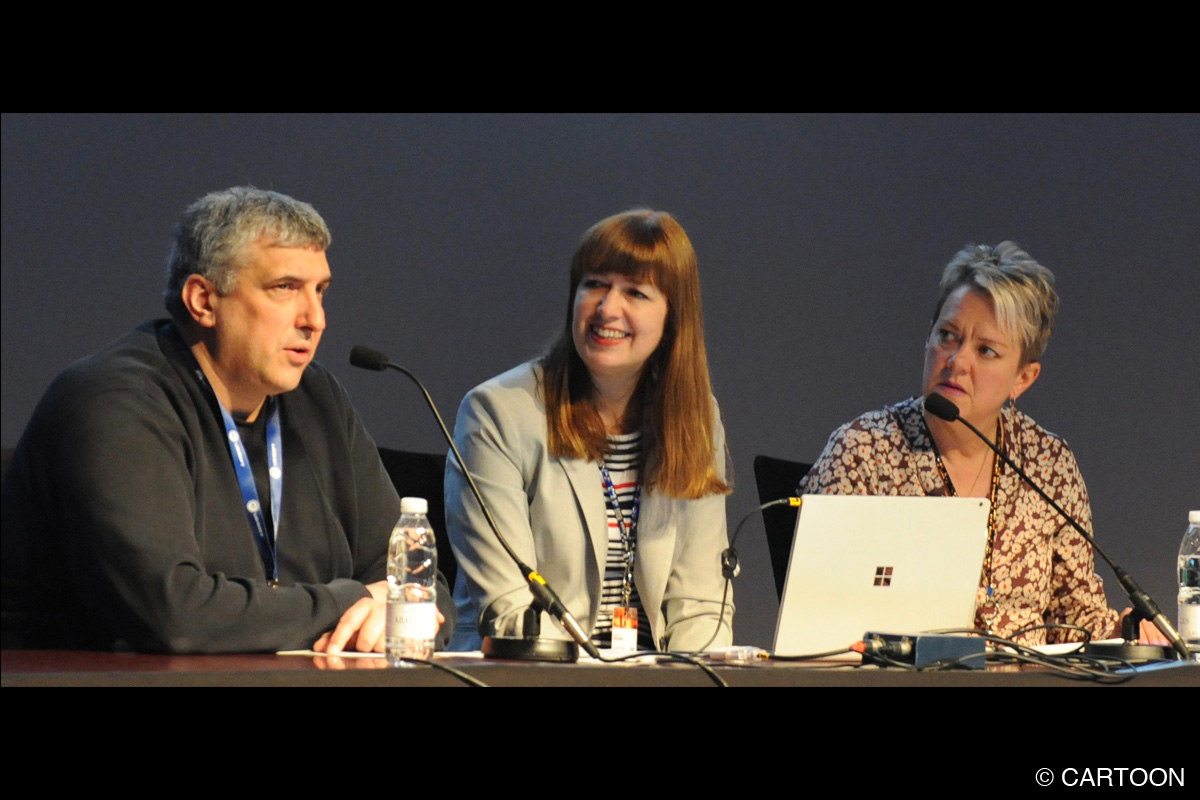 Kensuke’s Kingdom, an exciting new film project from Lupus Films, which follows their globally acclaimed animated feature Ethel & Ernest, was unveiled at Cartoon Movie 2017. Kensuke’s Kingdom is an animated feature based on the best-selling novel of the same title by Michael Morpurgo. We talked with Camilla Deakin and Ruth Fielding, co-founders of Lupus Films and producers of Ethel & Ernest, about the project.

Hideki Nagaishi (HN): Where did the initial idea of this animated film project come from?

Ruth Fielding (RF): Also, the director Neil Boyle was working in our studio on another film of ours, and we knew it was a project that he was passionate about, and so we wanted to get involved.

HN: Have you had any conversations with Michael Morpurgo about this project?

CD: Michael Morpurgo is very enthusiastic about the project. He has visited our studio and watched the animated teaser we produced and he really loves the approach we’ve taken. It is a book that is very dear to him and so we are very lucky that he has allowed us to adapt it, and throughout the process he has given us the most wonderful encouragement and support. 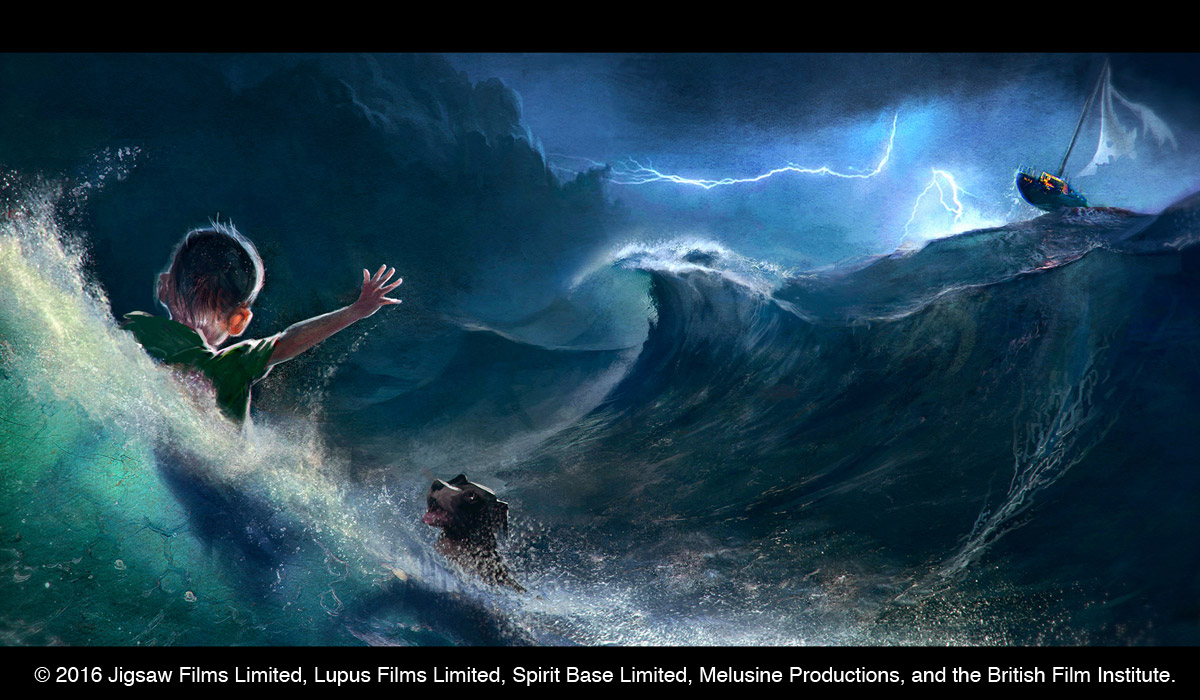 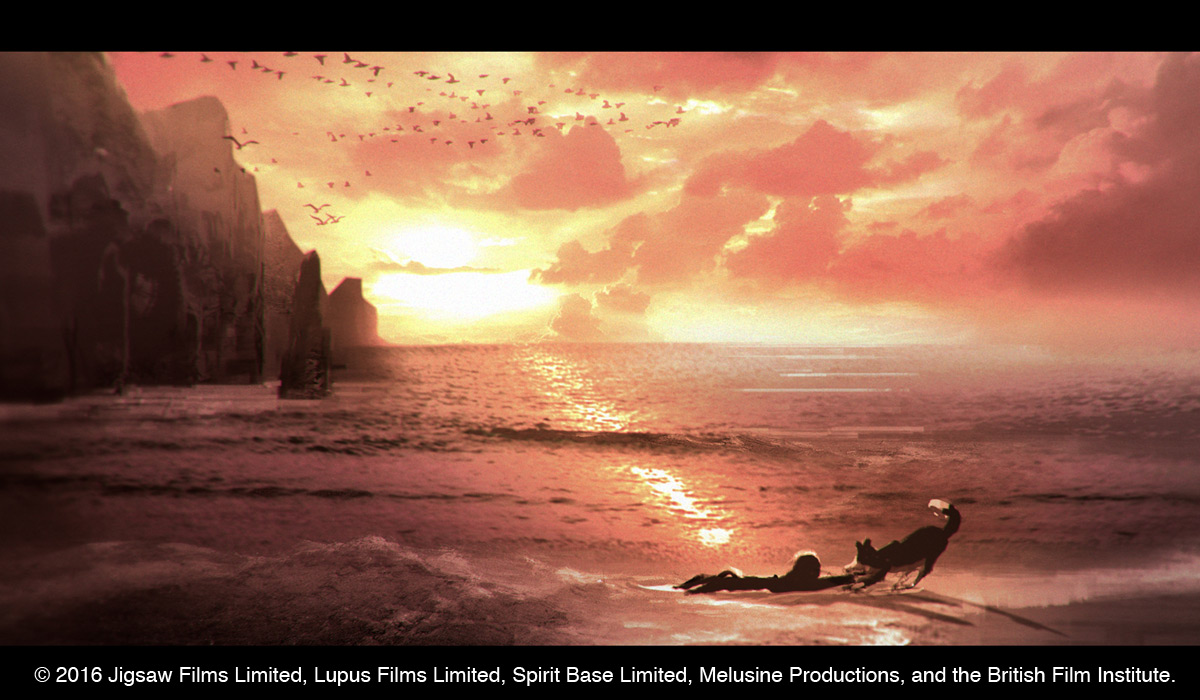 HN: How are you developing the characters, stories, and visuals of the universe?

CD: We’re developing the look of the film and the character design and so on, with the help of some development funding from the BFI, Film Fund Luxemburg, and Ffilm Cymru Wales. And the directors Neil Boyle and Kirk Hendry have been spending a lot of time working on getting the character designs and the very unique mixed media background style right, and so that’s basically what they’ve been doing for the last 12 months, which resulted in the animation test that we showed today. 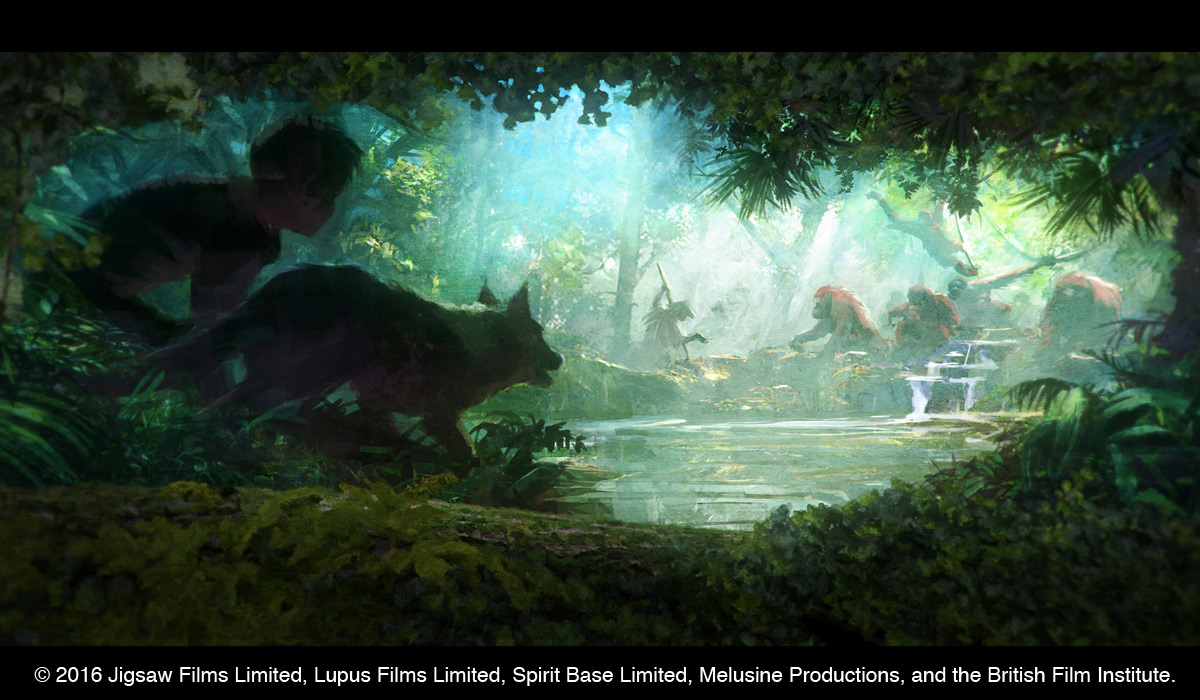 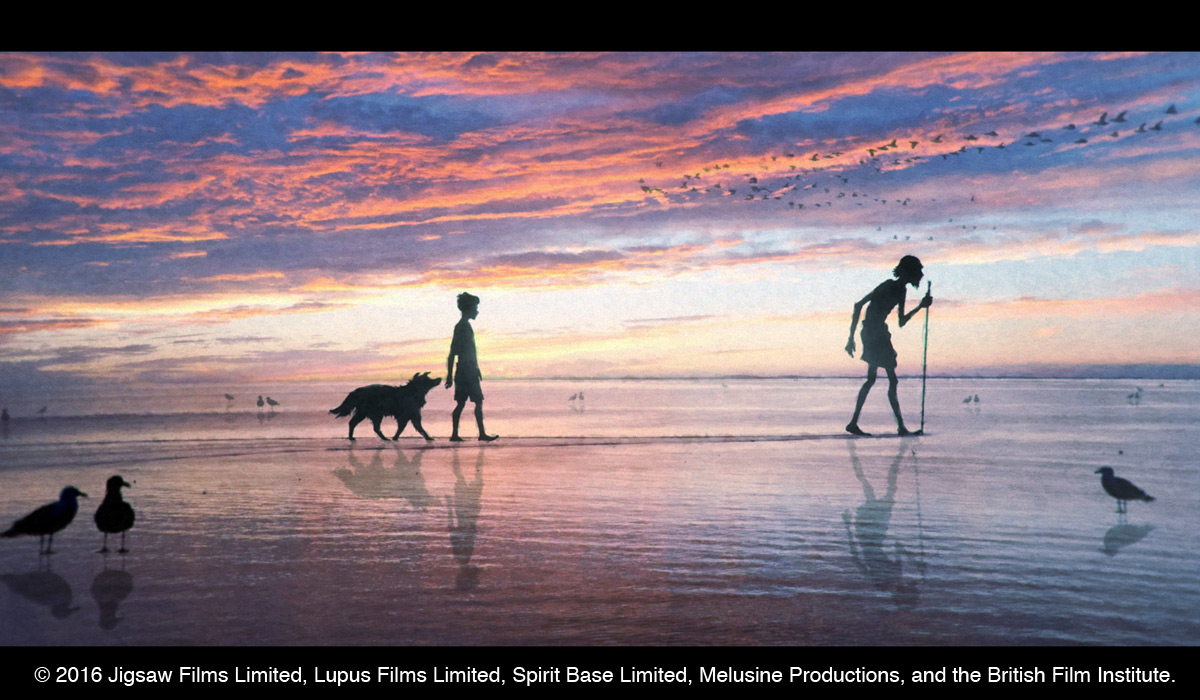 HN: Will you follow the story and universe of the original book in detail to make the animation, or are you planning to add original essences or materials to the animated film?

CD: The script has been adapted by a wonderful screenwriter called Frank Cottrell-Boyce, who has worked on many high-profile feature films and is a long-time collaborator with Oscar winning director Danny Boyle. Frank, along with our directors Kirk and Neil, has been keen to keep the essence of the story told in the book but we have inevitably made some changes to the story, simplifications in some cases and additions in others. One difference from the book is that the communication between Michael and Kensuke will be more non-verbal than in the book, so that the acting of the animated characters will really come to the fore. 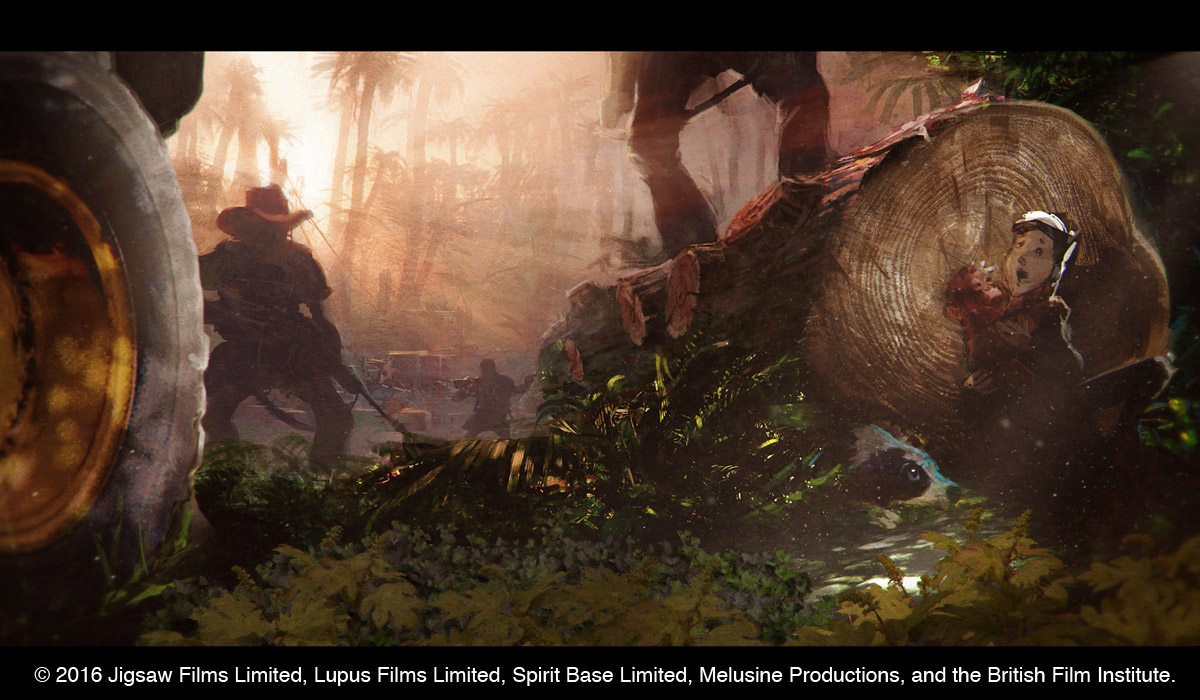 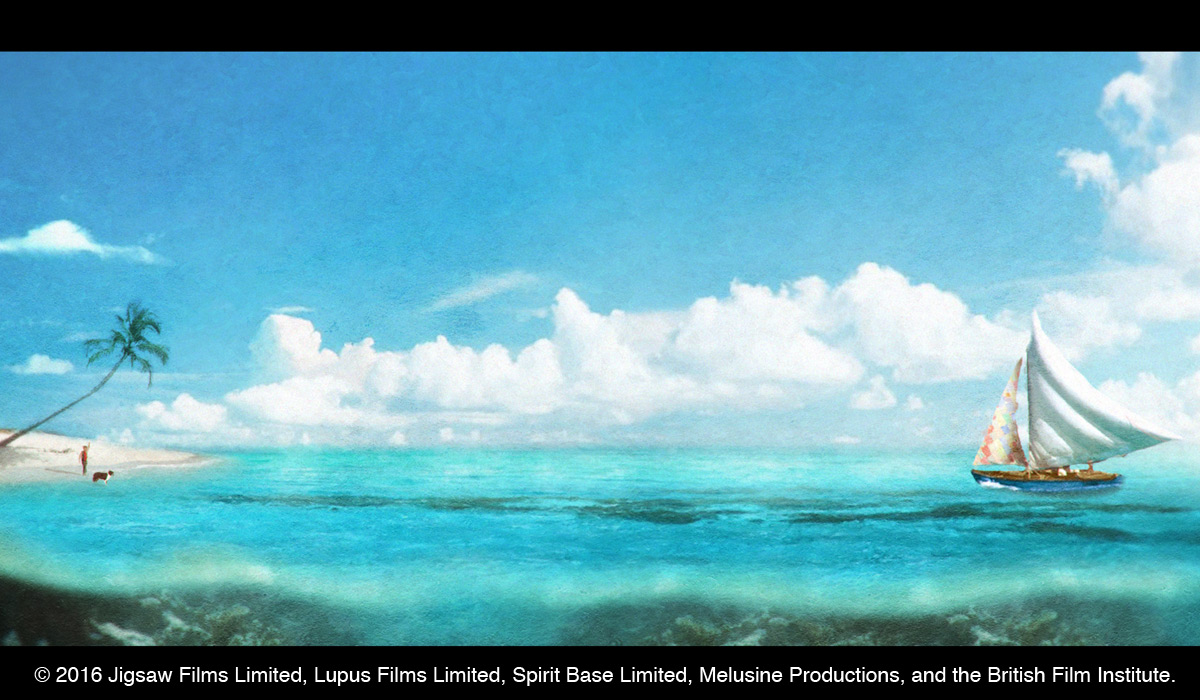 HN: What kind of message or experience do you want to deliver to the audience?

RF: I think the film has quite a strong ecological message about protecting the environment in which you live, and obviously Michael and Kensuke are very protective over the island and the orangutans that live there. I think another message that’s common in a lot of Michael Morpurgo books is about pacifism, it’s about acceptance and accepting not only the world around you, but the society you live in.

CD: I think also there’s a story of inter-generational friendship. It’s important that Michael, as an 11-year-old boy, and Kensuke, who is a much older man, form this bond, kind of a father-and-son or grandfather-and-son bond. They respect each other and learn from each other, and find that they’ve both got things to give each other. I agree with Ruth, I think that there’s an underlying theme of pacifism in Kensuke’s Kingdom. He was a soldier in the war, but he’s rejected that and he’s very much against violence in any form. I think he teaches Michael that there is a way to approach life, which is much more about sharing and collaborating and being considerate of others.

HN: At the moment, what kind of support are you looking for?