“Google Spotlight Stories” is an interactive, 360-degree form of storytelling made specifically for mobile and virtualreality (VR). You can experience an entirely new world of storytelling. This immersive experience offers an innovative and different way to enjoy stories. It also gives new creative challenges and inspiration to filmmakers.

We had an opportunity to interview with Patrick Osborne for his latest story, Pearl. He is known for directing the Academy and Annie Award-winning short animated film Feast. He shares his valuable insight into storytelling and directing for 360-degree video. Pearl is produced with the 3D computer graphics software Autodesk Maya and Google has offered their own software for the mobile part of the content. Being inside the world of Pearl, you could be part of a road trip and family journey between a father and a daughter. It leaves you feeling heart-warmed. 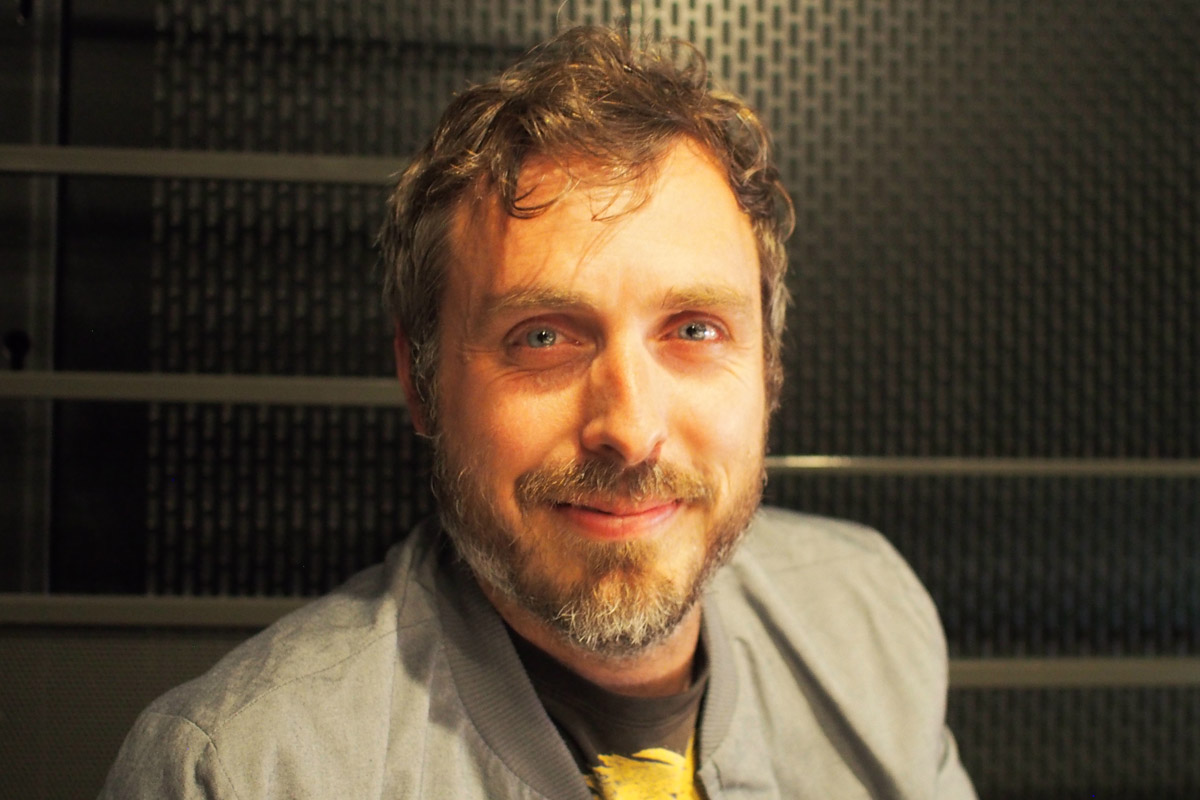 Animationweek (AW): How was the animation process of making Pearl? What is the difference from the normal film?

Patrick Osborne (PO): Something like this happens because Google is interested in partnering with various creative people to do what they want to do. That’s different right away. It’s not a business thing. It’s very much about the art of it, which is really hard to find and exciting as an artist, when you find that. We started there and this idea of making something that is around you. It’s not in a frame. It’s a little bit scary, but it’s interesting to put yourself into creative problems and try to get out of them.

AW: Did you have more creative freedom this time?

PO: In some ways, but its own kind of limit. I’m used to composing pretty pictures in the box and that’s not there. Then the process from there was me working by myself at first writing a story, and then working with Tuna Bora who was our Production Designer. She helped out with the story also in the beginning, because it was just us two working together. We came up with a road trip story that we liked, which is similar to animation production in a way, but you cannot really storyboard in the same way because there’s no tools to really draw in 360 around you well. Well, there really aren’t even great storyboard tools for regular storyboarding. Everyone works differently. So this is even worse than that, because you can’t draw in a sphere. I did a storyboard, but it was more of an emotional story beat thing than an actual simulation of the experience. I think it would be good to have tools that made you do that better.

Then we did a 3D layout, which is similar to what you do in animation. Then when you animate, it’s not that different but the characters never leave the screen. You have to make sure everything is proper. One of the examples we have is that one animator forgot to have the dad press the gas pedal because he wasn’t looking down and, as a director, you have to make sure to get the performance right. Then, you have to look down and make sure that all the other stuff is working, too. In a normal film, you could just ignore that. It becomes a lot more work. Then building the whole world around you is harder because in animation you can just do a painting sometimes. Here you can’t. It has to work dimensionally.

All of that becomes quite more work. To counter that work, I made the frame rate low. So the characters are going at 15 frames a second, which is a little bit more abstract in animation even than real, but the world still operates at 90, at the full speed of the headset. In a lot of ways, it’s the same but there’re a few things a little bit harder.

AW: Did you think differently when you direct?

PO: You have to worry about the audience missing things. You have to make sure that your story is simple and emotional enough that if they miss some stuff, it doesn’t matter.

It’s a lot like theatre, in a play. Everybody knows that most of the action is in front of you where you’re sitting. I wanted most of it to happen here so you didn’t have to look that much, but then even in some plays, sometimes people will run down the aisles and make sounds up here. You can tell the audience, “Look up there for a second” and that’s okay. That’s fun to direct it that way. 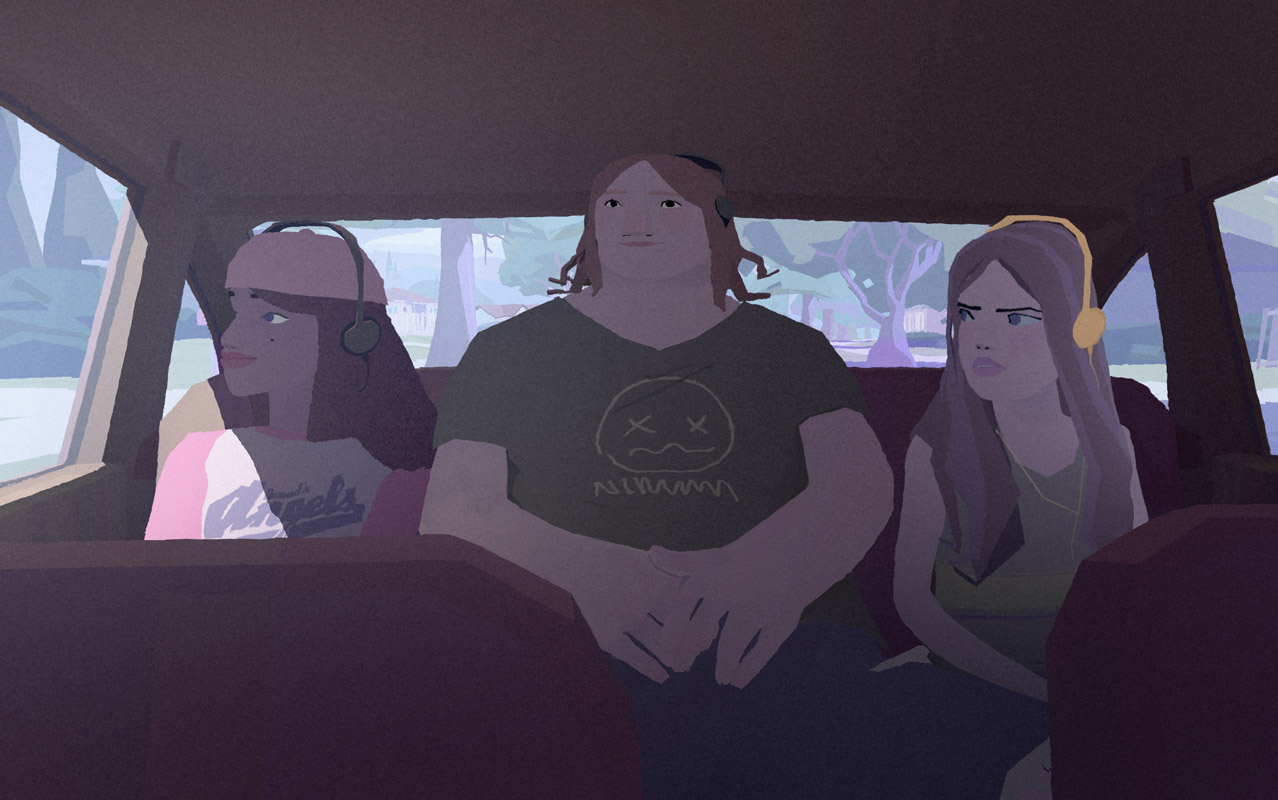 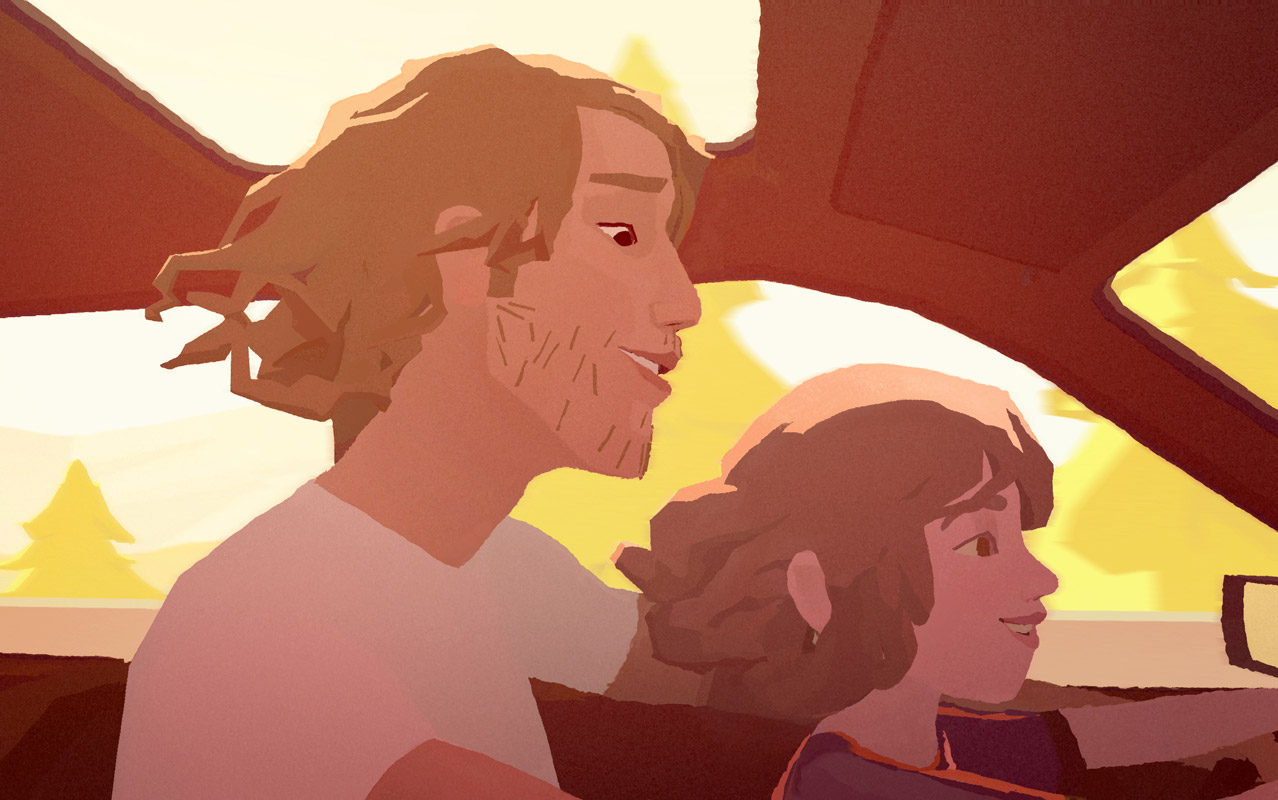 AW: How about story writing? Did you write the story in a different way?

PO: No, it’s the same. Writing is writing, I think. Coming up with a story is interesting. It’s just about taking things from your own life that you’re passionate about and interested in, and combining them in interesting ways that make you excited. This started out as a story set in the car over time. I thought that would be cool because you have an environment that the audience is very much grounded in. They know which way is front and back, but you can also change what’s outside, and the weather and the colour. It becomes like this moving room, which is really cool. We could do it in a house, but it is cooler doing it in a car. But a house is where people live, so I thought, “Well, I should just make the characters live in their car.” And if they’re homeless and live in the car, and he’s following this passion of being a musician, that leads you to where you pass on a passion just like you pass on an object to your children. I thought, “Well, my dad was an artist, too” and I’ll call him back. He kind of gave up doing what he loved so we can have a normal life, because his company moved and we stayed where we were with our friends and family. Then I also started putting that into the story.

As you write, you explore and figure out where it’s going. It kind-of tells you in its own way. I had versions of it that were funnier, that had some fun scenes, but it felt like the heartfelt way was better for this because in VR no-one was really doing that. And to make it a folk musical, with a guitar based musical, no-one else is doing that either. It all seemed pretty like that would be a really interesting way to go. 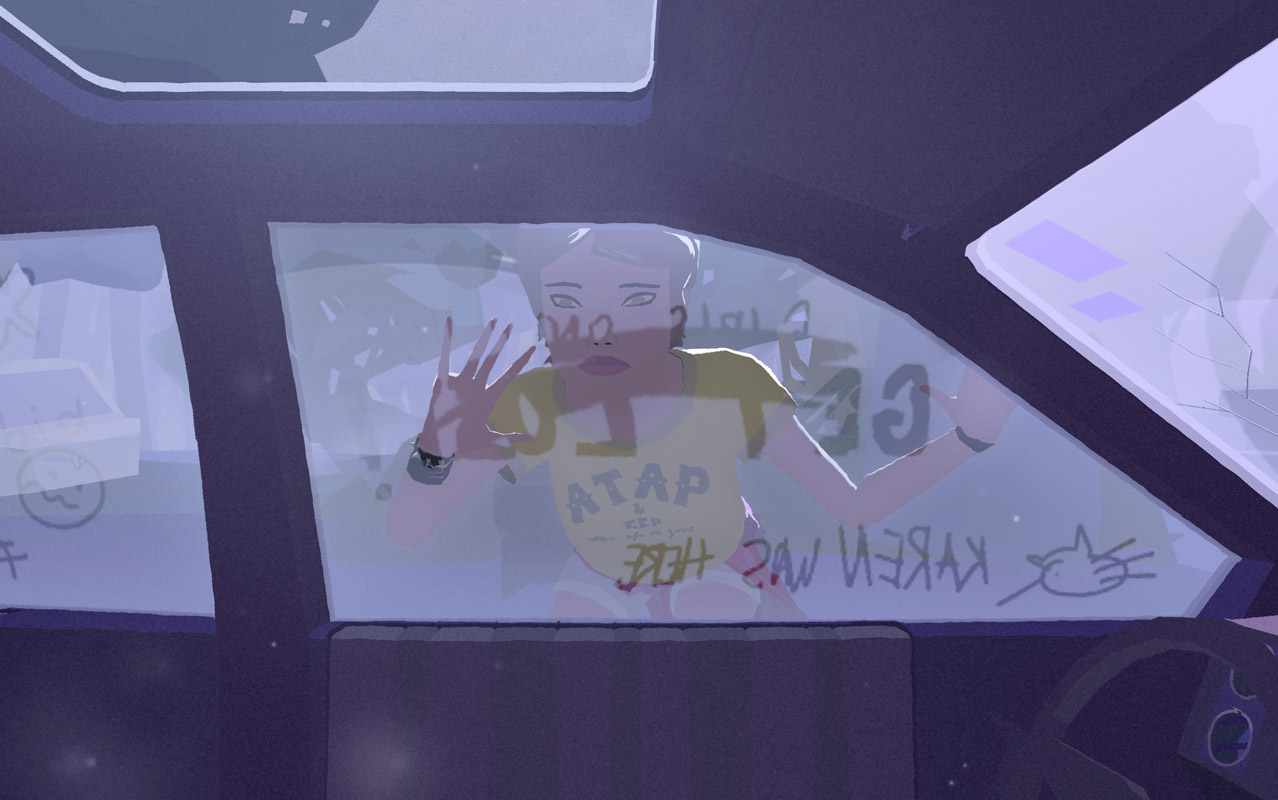 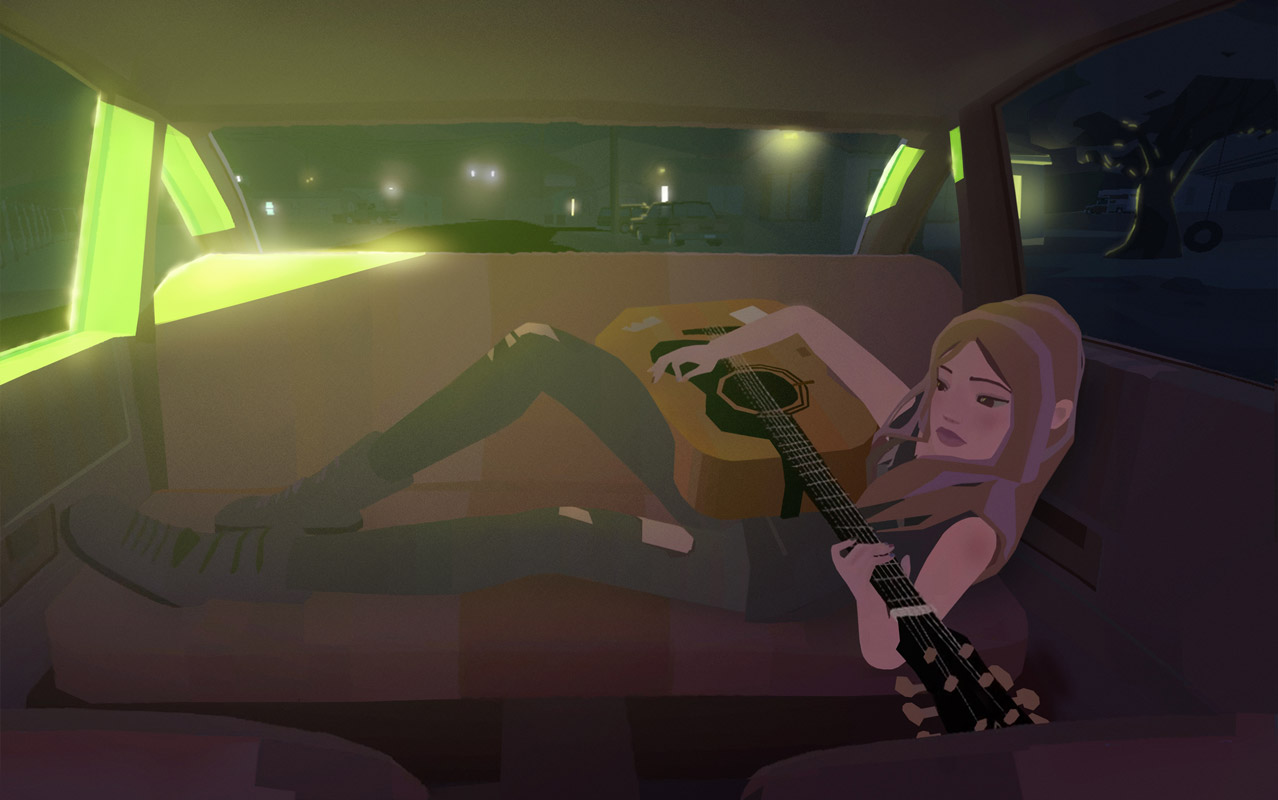 AW: How did you feel about the whole experience of the creating 360-degree animation? Did you enjoy it?

PO: I enjoyed it a lot. It’s a lot about the people that you work with. They’re all really wonderful people to work with, so that helps. Then it’s very creative and very much like my thing, what I wanted it to be. This was very much like, “Go for it. Just do what you want”, which doesn’t happen very much. That’s nice. Even at Disney in the shorts, you can’t quite do that.

AW: What do you think about the future of 360-degree animation?

PO: I think, in the future, VR’s adoption will be slow because it’s too expensive. It’ll be only gamers that really do it first, but animation is completely the best way to do this stuff.

AW: Do you see potential?

PO: Yes, there’s a lot that you can do and it’s only getting faster, and better, and cheaper. They’re trying to do live-action in VR, but you can’t capture the whole room in the same way that you can animate it. You want to be able to walk around the room a little and you can’t do that in live action at all. I think animation is the best way to experience VR for a while. For about 10 years probably, until things get faster.

AW: Would you like to continue creating 360-degree animation?

PO: Yes, I have one at home and I make little art installations just for myself. And I tell my wife, “Here, put this headset on and stand…now you’re in the desert beach.” It’s pretty fun to do that for sure.

Google Spotlight Stories is a new form of storytelling made specifically for mobile and VR. In these 360-degree, interactive stories, your phone becomes a window to a world all around you. The sensors on your phone allow the story to be interactive; when you move your phone to various scenes, you are able to unlock mini-stories within the story.

Pearl is the seventh Google Spotlight Story, and is directed by Academy Award-winning filmmaker, Patrick Osborne (Disney’s Feast). Set inside their home, a beloved hatchback, Pearl follows a girl and her dad as they cross the country chasing their dreams. It’s a story about the gifts we hand down, their power to carry love… And finding grace in the unlikeliest of places. The short is anchored by the original song, “No Wrong Way Home,” written by Alexis Harte & JJ Wiesler and performed by Kelley Stoltz and Nicki Bluhm. Produced with Evil Eye Pictures, Pearl breaks new ground for Spotlight Stories in both storytelling and technology, with the most shots, sets, and characters, along with custom lighting, effects and interactive surround sound in every shot.

About Rain or Shine

Together with Nexus Productions, Google Spotlight Stories is proud to present Rain or Shine, directed by Felix Massie. The sun is shining, the birds are singing, there’s a spring in everybody’s step. Everyone in London is enjoying a perfect summer’s day… Until Ella steps outside. Everywhere she goes it rains – is she going to ruin everyone’s day forever? The studio’s most interactive short yet – as with other Spotlight Stories, the viewer can look around, and in doing so, can find subplots and surprises, in addition to waiting for the viewer to return to the main view before resuming. Rain or Shine will launch on YouTube later this summer.

Special Delivery was directed by Tim Ruffle of Aardman Animations and follows the adventures of a humble caretaker, disturbed by a mysterious rooftop stranger who is always one step ahead… Leaving behind a trail of gifts. Launched last holiday season.