05. “Ginger’s Tale”: the story behind a fantasy tale of traditional 2D animation

Potter, a kind and poor guy, finds a magical artifact called the Stone Of Fire, that makes him rich and mean, but the evil Queen wants to take back the Stone Of Fire by any means necessary. Only a girl called Ginger can save Potter with her devotion.

Ginger’s Tale is a fantasy feature film from Russia, developed with the classical 2D animation technique with fun characters and lively color palette. It is the story of Ginger, a clumsy but strong-hearted girl, Potter, a struggling but well-natured pot maker, the evil Queen, the film’s antagonist, and other unique characters with strong personalities, depicted in classical frame-by-frame 2D animation.

Ginger’s Tale was nominated for “Feature Films in Competition L’officielle” at the Annecy International Animated Film Festival 2020.  The Russian studio, Vverh Animation Studio, developed the film and Konstantin Shchekin, the director, and Yuri Ryazanov, the producer, from the studio generously told us the story behind the film, just after the festival. 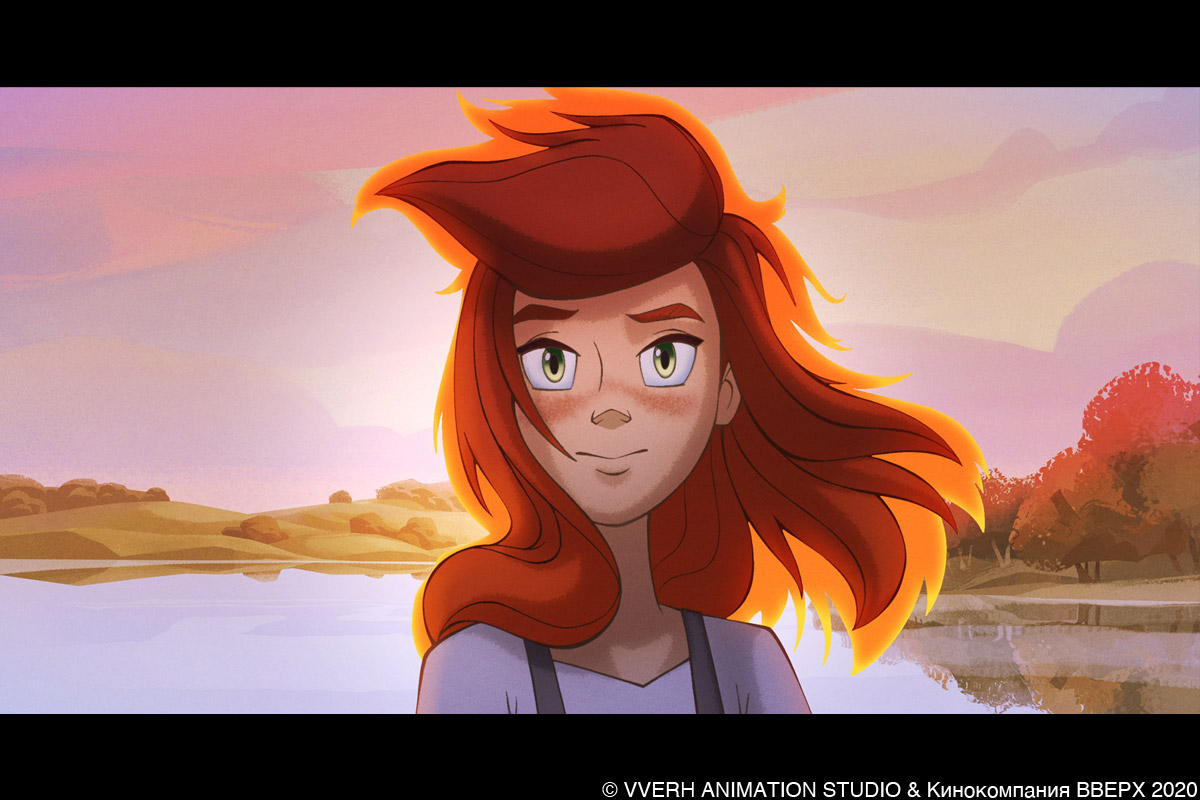 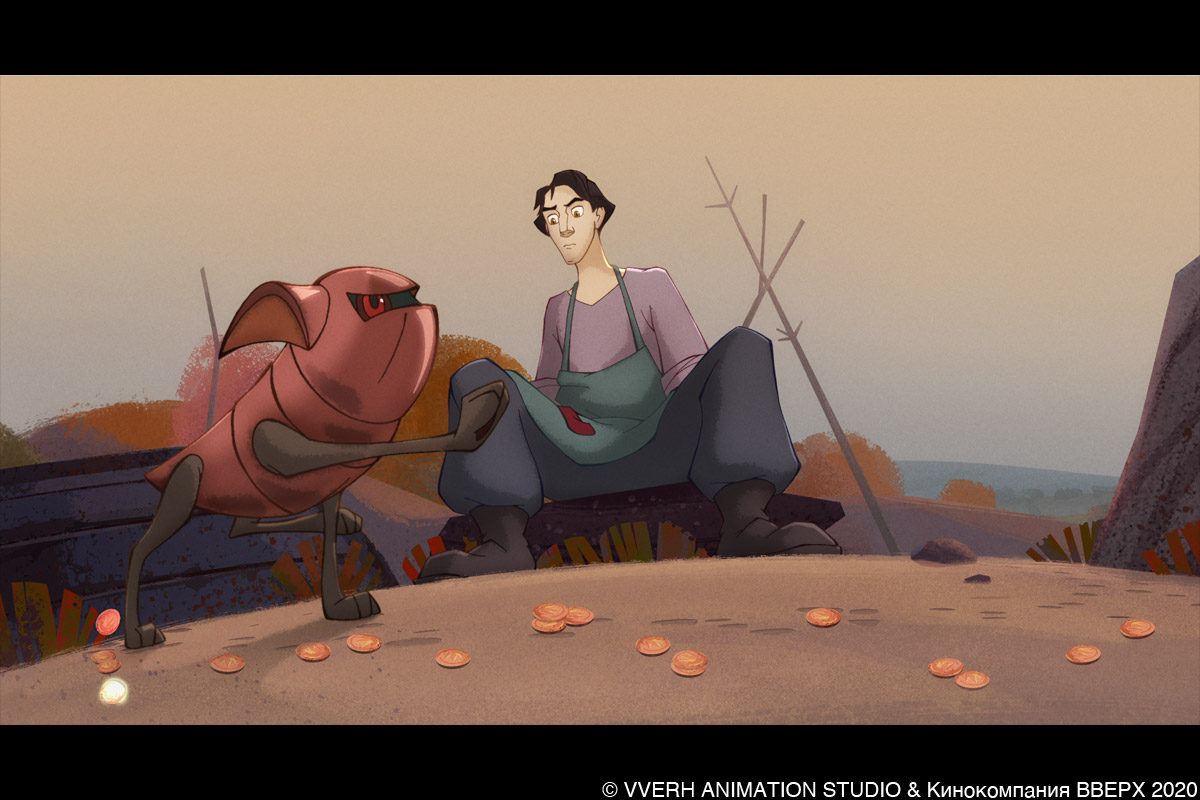 Interview with the director Konstantin Shchekin

Hideki Nagaishi (HN): Could you please let us know where the initial idea of the story came from?

Konstantin Shchekin: This is a film of our original story with new characters and plot, with the initial idea coming from our minds. We love Hans Christian Andersen’s The Tinderbox but we also admired the great storyteller himself. We thought, “Why not combine the magic dogs, the money and the love in this new fairy tale?”

HN: Could you please let us know, in terms of story development, what you took care in the most and what was the most difficult part of it?

Konstantin Shchekin: We took care in the ending of the film most of all. The end scene of a film must be vivid and thoughtful, which will be remembered all at once. As a story with love, warmth and laughter, the most difficult task for us was to make the audience not get lost in the story line at the peripetia in the last part of the film.

HN: When you developed the story, did you have the global audience in mind or did you develop the story for a Russian audience?

Konstantin Shchekin: We certainly had the global audience in mind.

HN: We would like to hear the process of developing the personality and background in each of the main characters. What did you take care in the most and what was the most difficult part of it?

Konstantin Shchekin: When we wrote the story, we wanted to create bright, memorable and appealing characters and achieve interesting interactions among the characters for the audience. I think these processes form an amazing story. 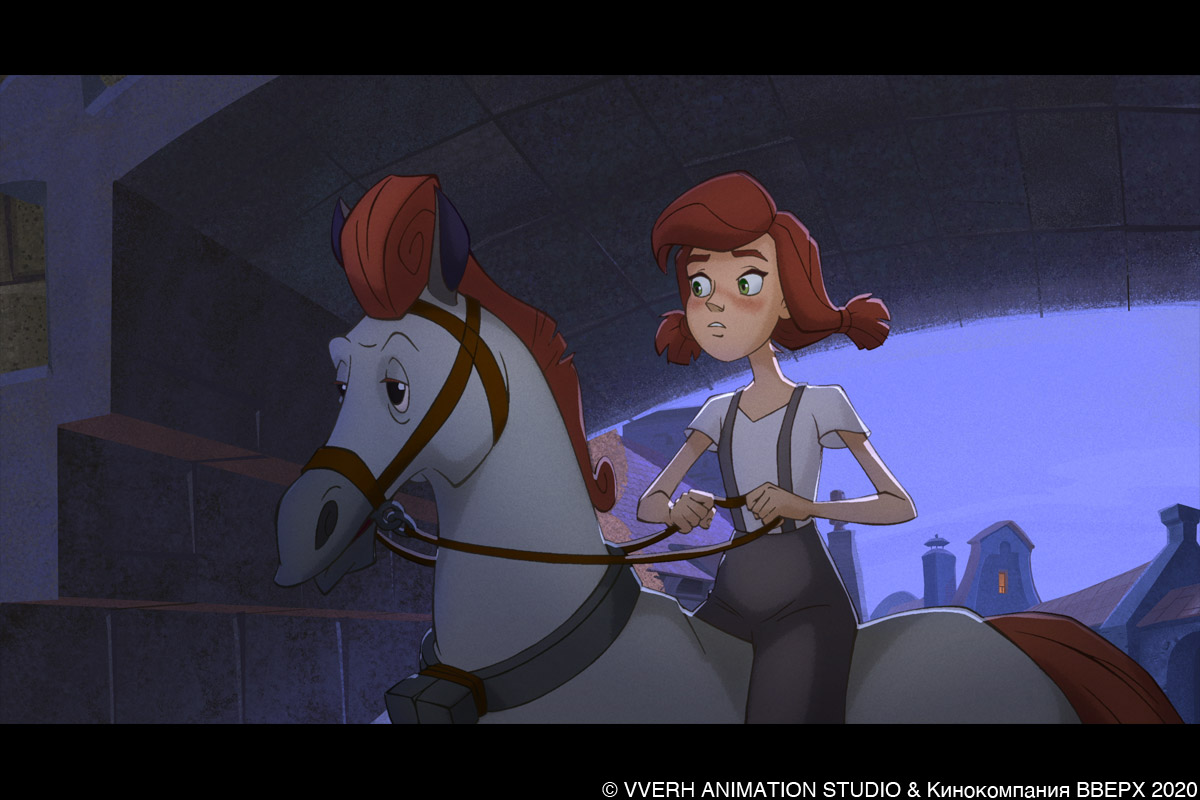 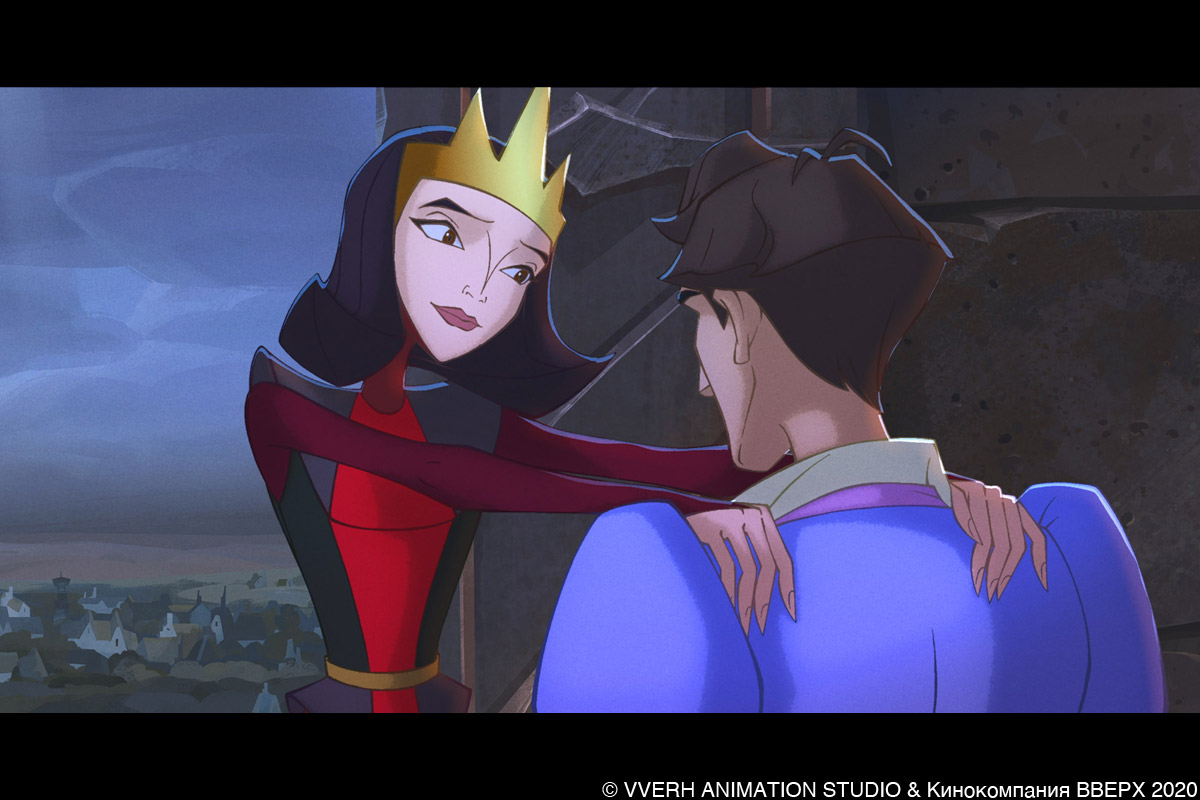 HN: We would like to hear the story behind the visual direction. How did you design the characters and the environment of the story’s universe?

For example, after the writer and the film director describe their hero, animators create the visual images of the character and background artists draw the environment of the film, completing the story of the hero. The personality of a character affects the character’s world, but animators often invent some interesting features of a character that matures the character. There is a feedback loop between the two sides of character development: creating the personality of the hero and designing the world the hero lives in. This process of creation was repeated a few times and our hero has “life experience” by absorbing what our creators lay down.

HN: We would like to hear about the collaboration with the composer. Was there anything that impressed you or otherwise found the most interesting during the development of the music for the film?

Konstantin Shchekin: My first impression of the work with the composer was great. He was very inspired by the story and the original material. He proposed many great songs inspired from the story and materials of our fantasy film and the songs are sublime to the level of being “fairy-tale music”. 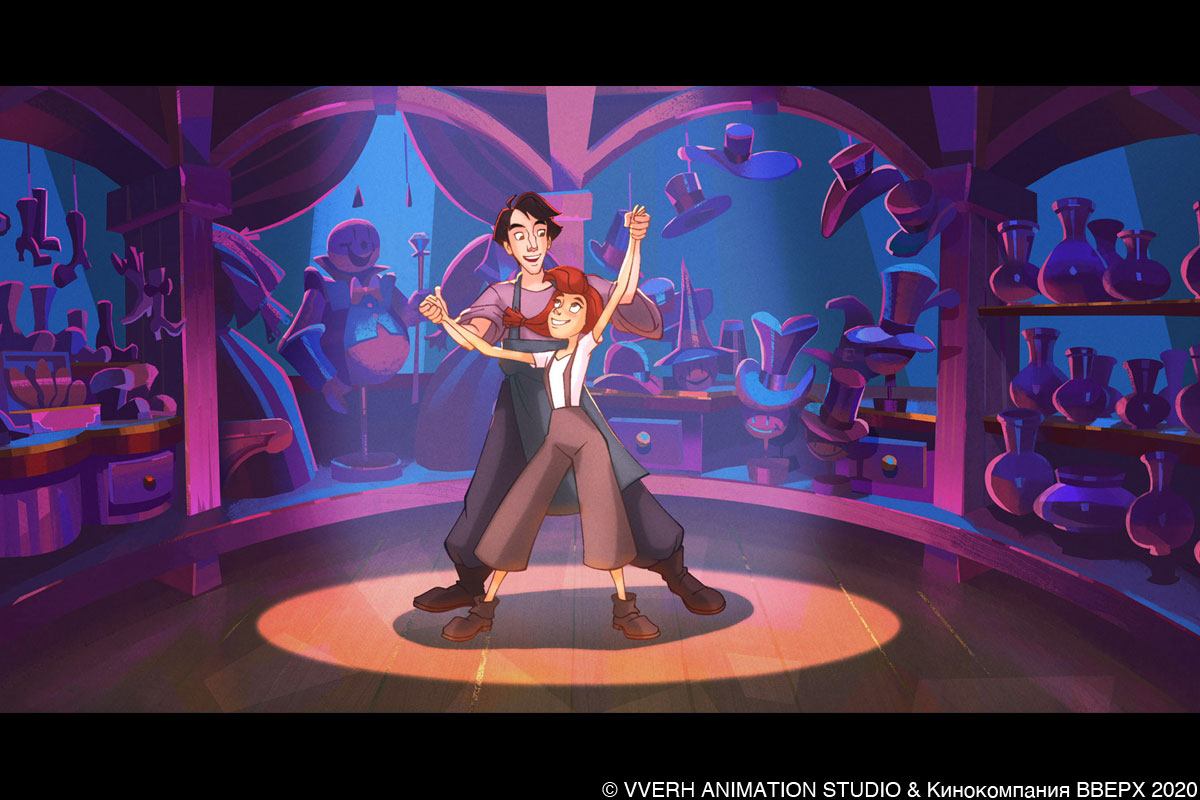 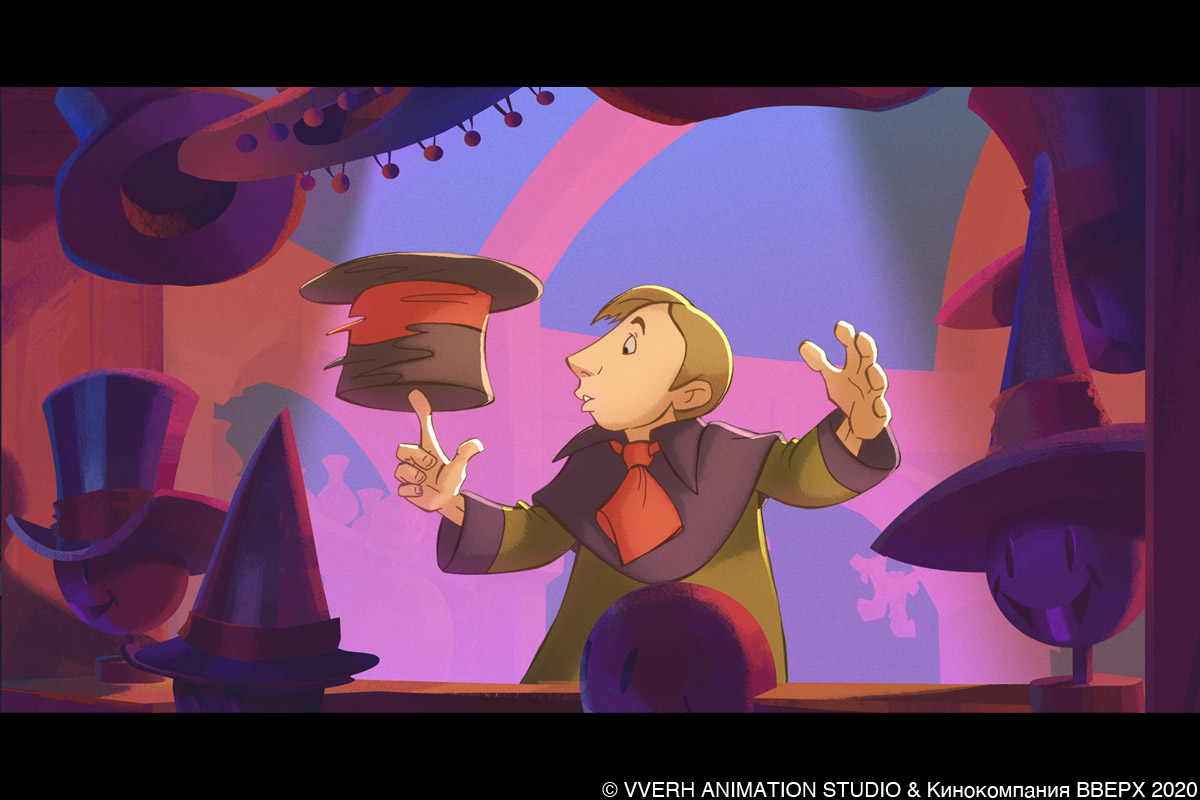 HN: Lastly, could you please let us know what you wanted to deliver to the audience the most through this film?

Konstantin Shchekin: I would like to deliver a message: “Do good to those who love you, give them love and care, and remember that money is not the only thing that matters.”

Interview with the producer Yuri Ryazanov

HN: We have a few things we would like to ask you about the project of the film, not about the film itself. How did the project start?

Yuri Ryazanov: The project of this film was planned to be started after our first animated feature film The Tale of Peter and Fevronia (2017). The preparatory period of Ginger’s Tale began after we completed the film.

HN: In your journey up to getting the greenlight in production, what moments were difficult or challenging for you?

Yuri Ryazanov: I didn’t think there were any big difficulties and troubles. The project was well planned and accomplished via the concentrated teamwork of Vverh Animation Studio. 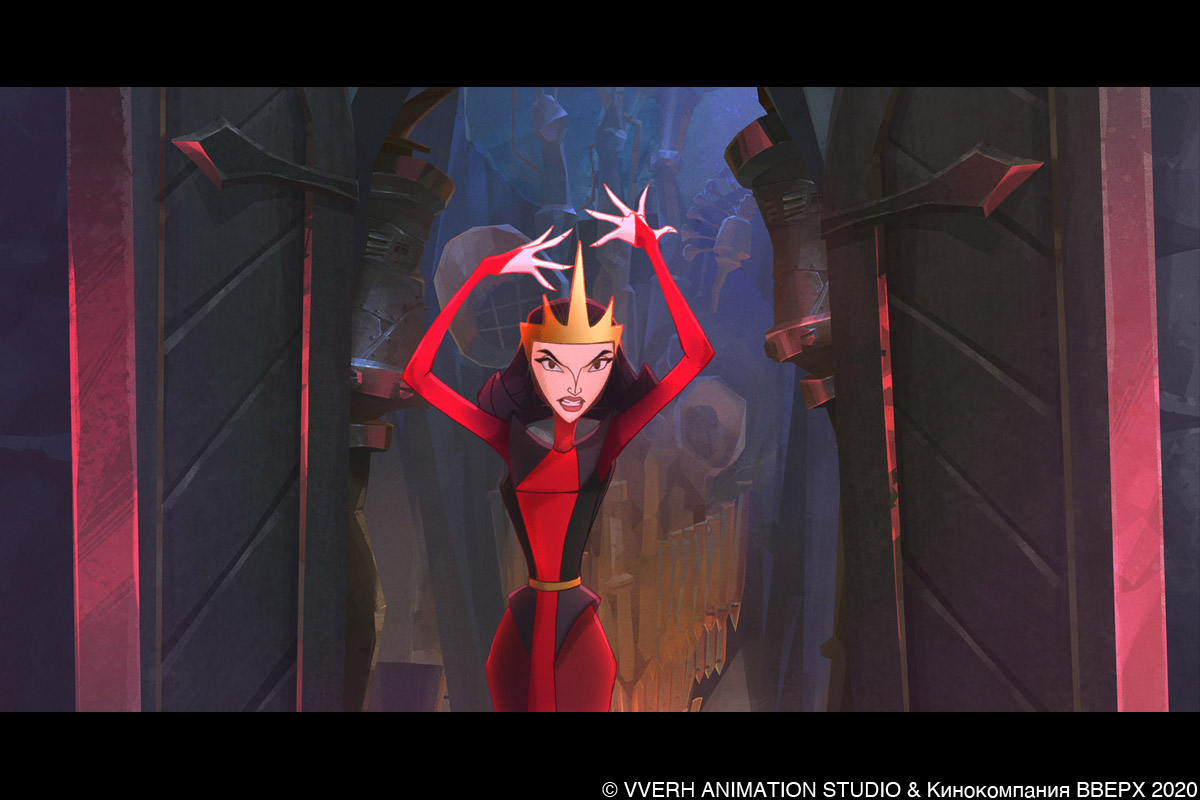 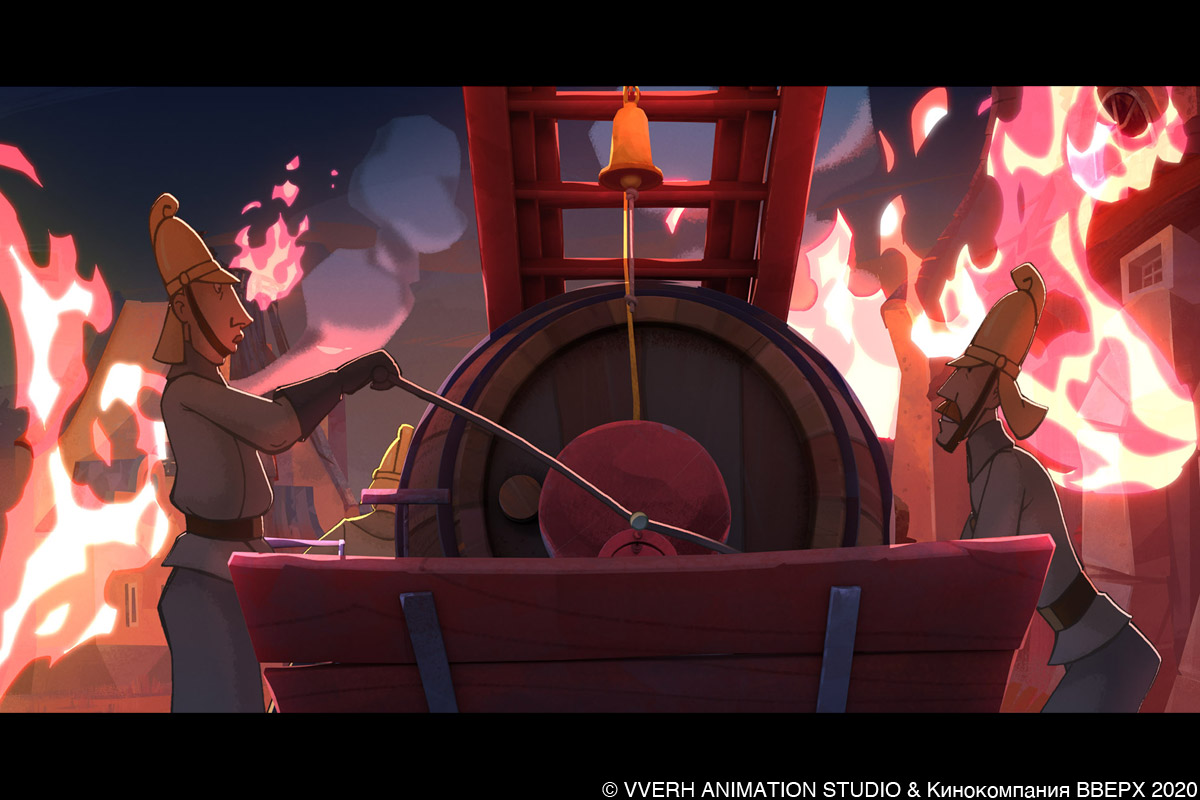 HN: The quality of traditional hand-drawn 2D animation is quite good, and we are curious about the environment of the Russian animation industry in terms of developing traditional 2D animation. We would like to ask three questions about this.

How many 2D animators took part in the film and how did you gather them? What was the most difficult thing in that mission?

Yuri Ryazanov: We had 25 animators for the film in the end. Firstly, we invited the leading 2D animators in Russia for the film project but the number of animators wasn’t enough. So, we invited the best people from the remaining Russian animators but we still didn’t have a sufficient number of animators. Hence, we decided to have animators who weren’t the best and completed the film. The real difficulty with this situation was to get them on the same level of animation as the best animators. It may not be brilliant, but it comes close to our high standards.

HN: What do you think about the current situation and the future of 2D traditional animation development in Russia?

Yuri Ryazanov: I think 2D traditional animation in Russia is awaiting a sad future. It’s a very expensive technique and the market cannot afford it. Let’s take a look at the first episode of Tom and Jerry and compare it with the last season. We made a film about love being more important than money. However, I think that when it comes to money and 2D traditional animation, the money will win sooner or later.

04. “Shooom’s Odyssey”: behind the story of the beautiful animation

05. “Ginger’s Tale”: the story behind a fantasy tale of traditional 2D animation