06. “Children of the Sea”: A film of wonder fueled by passionate creators

“Children of the Sea”

When Ruka was younger, she saw a ghost in the water at the aquarium where her dad works. Now she feels drawn toward the aquarium and the two mysterious boys she meets there, Umi and Sora. They were raised by dugongs and hear the same strange calls from the sea as she does. Ruka’s dad and the other adults who work at the aquarium are only distantly aware of what the children are experiencing as they get caught up in the mystery of the worldwide disappearance of the oceans’ fish. 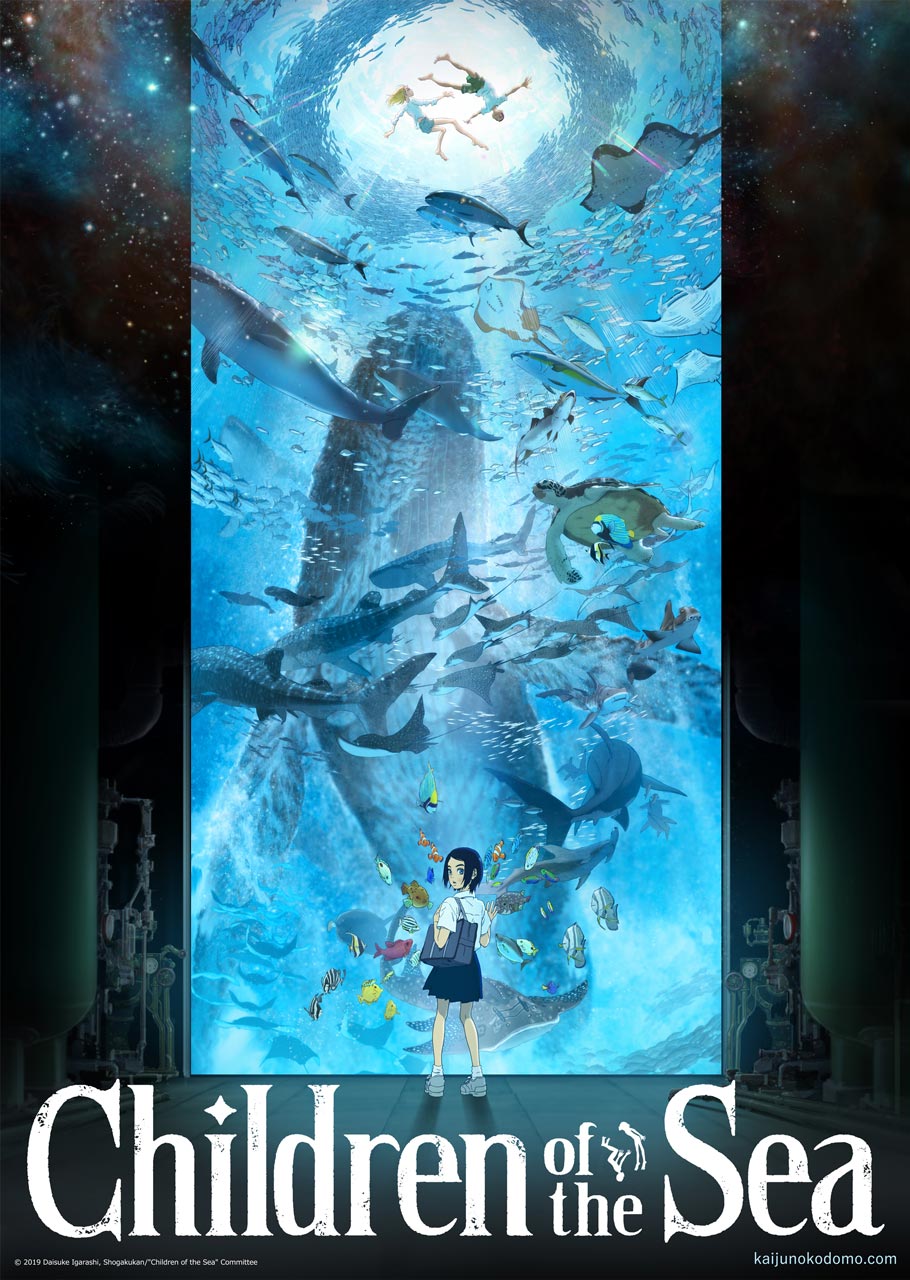 STUDIO4°C is one of the leading animation studios in Japan, having developed animated features that acquired international acclaim, such as Mind Game (2004) and Tekkonkinkreet (2006). After being in production for over five years, their new featured film Children of the Sea (2019) was officially screened during the Annecy International Animated Film Festival 2019. Daisuke Igarashi’s manga of the same name, which has the mysterious theme of the origin of life on Earth, was made into a film with dynamic animation and beautiful, detailed and delicate background art, which are both the representative characteristics of STUDIO4°C’s works. The music was composed by Joe Hisaishi, who is famous for writing music for films by Hayao Miyazaki and Takeshi Kitano for many years. Specifically, the scenes of the main characters with lives in the ocean – the key part of the story – are animated with very dynamic moving imagery.

We had a special opportunity to hear the story behind Children of the Sea from the main creators, including the director Ayumu Watanabe. We are happy to be able to deliver their precious words to you.

(You can also read our special long interview with Ms. Tanaka, the CEO of STUDIO4°C from here). 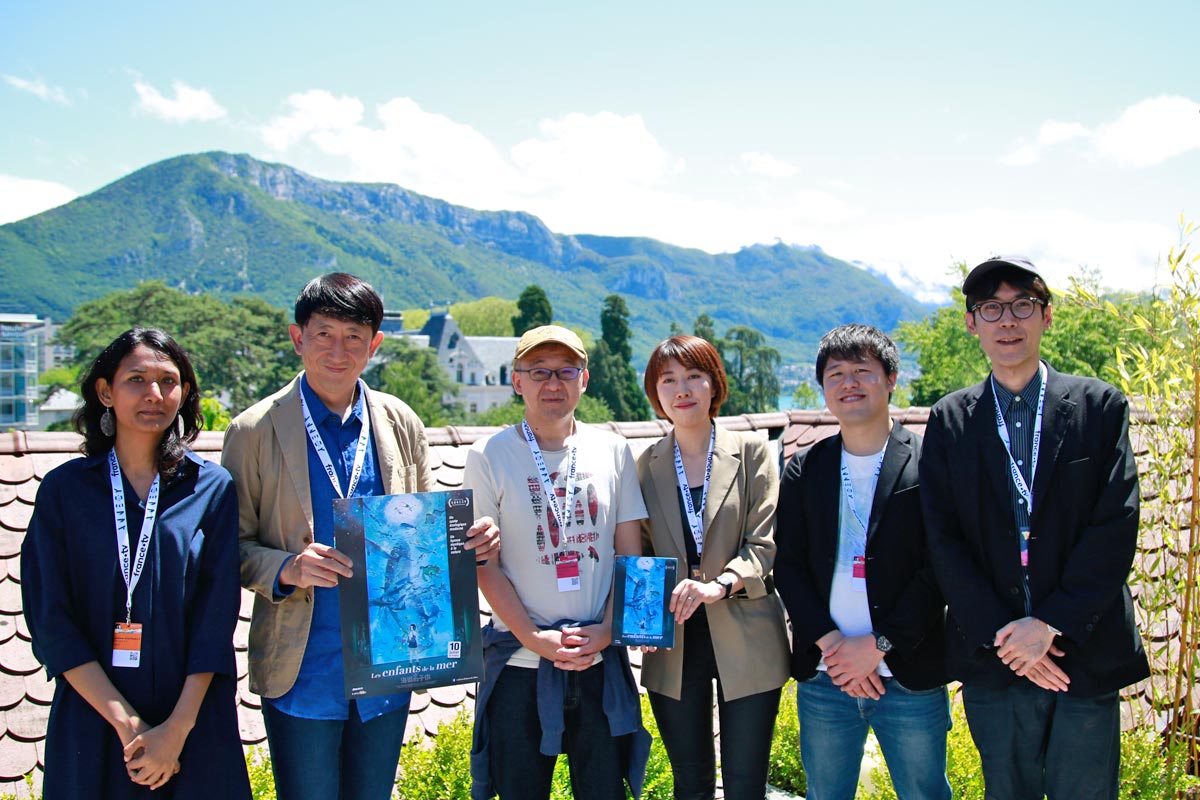 Hideki Nagaishi (HN): Mr. Watanabe, when you read the original comic, what of it attracted you the most and how did you think to express that in animation?

Ayumu Watanabe: The things from the original Manga that caught my heart are firstly the detailed, expressive illustrations, which were accomplished by Mr. Igarashi’s high drawing skills. As a whole, they are visuals with a strong impact.

I could imagine the depth of its story just by seeing the cover of the manga. Soon after I opened it and started reading, I was pulled into his talent of drawing and storytelling, and then I plunged into the depths of the story’s theme. As a reader, it was like an overwhelming amount of information conveyed as Mr. Igarashi’s illustrations were directly flowing into me.

The second charm of the original manga for me is its simple but magnificent and profound theme on the relationship between life and nature. So, I aimed to tell the story via animation without cutting down on its attractiveness by making “not slimming down on the theme and amount of information from the original manga” as the mission of the film.

HN: Mr. Watanabe, what kind of message or experience do you want to deliver to the audience through the film?

Ayumu Watanabe: My wish is for the audience to experience the things and visuals Ruka – the film’s main character – experiences through the story, together with her. I hope that the audience draws their own conclusion, such as the life force, planet Earth, and the Universe by interpreting freely by themselves. If this film can be a part of the audience, by allowing them to reflect, this film would be able to have the meaning of its existence. The main message of this film is very simple: it is “the mystery and joy of life” and Ruka’s personal story, and each individual audience member are also free to feel that.

HN: This is a question to Mr. Watanabe and Mr. Konishi: I would like to hear the story behind the scenes in the sea such as the scene of “the festival”. For those scenes, what kind of research did you do and how did you stretch the image for the scenes from the drawings in the original comic?

Ayumu Watanabe: How did you transform my storyboard into the final visual of animation, Mr. Konishi?

Kenichi Konishi: First of all, the design of the story’s universe originated in the director’s mind and he incorporated his vision onto the storyboard. Then, I received the impression and developed the visuals of the film based on his storyboards, and in some cases expanding his visions. The role of my position in the team was responsible for managing the final visuals for the animation. Each animator gives me keyframes with suggestions on the final look. Hence, I was like the final point in the pipeline where all the creators’ individual visual visions of the film gathered and merged together to form output the animation with the final visuals.

Ayumu Watanabe: I recalled the motif of each scene from the original Manga while keeping in mind that I want to let audiences experience what the main character experience in the film at the same time. In particular, I drew the storyboard of “the festival” scene while being conscious of giving the visuals a subjective quality. I thought that it would be effective in animation.

And then, Mr. Kimura, the art director, and Mr. Konishi, the animation director, developed the film’s visuals by reflecting on both the theme I put into the film and images I’ve amplified from the original Manga in my storyboard. All the scenes drawn by them are much more splendid than my storyboard.

It was a sensational outcome for “the festival” scene, in which all the energy of the film is poured into, from not only Mr. Kimura and Mr. Konishi, but from everyone who did their part. The scene ended up becoming the greatest highlight of the film made by all the creative staff.

The production of the film was such an exceptional environment, I think I was probably the first person who could experience the story of the film, not Ruka who is the main character of the film!

06. “Children of the Sea”: A film of wonder fueled by passionate creators