Animationweek had the opportunity to interview Dominika Osak, the producer of a Polish animation studio Badi Badi (http://www.badibadi.com). Badi Badi was established in 2003 and they have already one internationally distributed title. We would like to share their story and the current situation of the Polish animation industry with Dominika Osak. 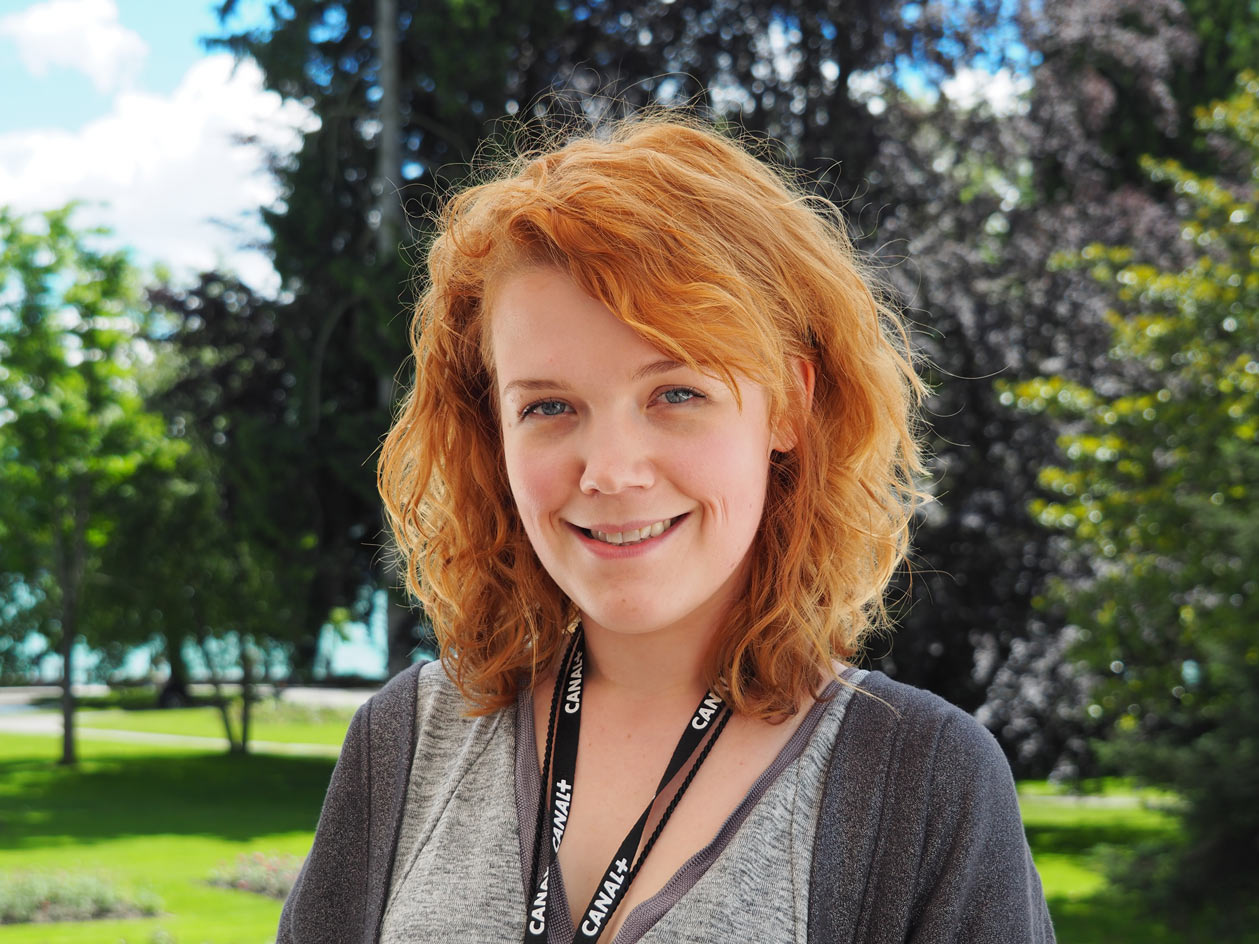 The first success with Agi Bagi

The journey of Badi Badi embarked in 2003, and in the early stage they focused on animation for TV commercials and VFX for movies. After a few years, Tomek Niedźwiedź and Tomek Paziewski, the founders of the studio, shared their passion and confidence to create high-quality animation for kids. Osak says: “We love seeing children smile while watching animation. This is the very core of our love for creating animation.”

They took action to make their passion a reality. She tells us that in a short time they had a big opportunity:

“We ran a scripting competition in 2011 to receive a good story and could gather a lot of good scripts in Poland. We knew that there are many great story ideas, so we wanted to explore each one of them to discover the story for us. We hired a few experts from the animation industry in Poland when we ran the scripting competition. They went through hundreds of scenarios, and decided on a story titled Agry Bagry. We changed the title of the story to , because it was difficult to pronounce and the word ‘agry’ also could be associated with ‘angry’, which of course runs contrary to our story. Scriptwriter Bartosz Słomka, and creator Tomek Niedźwiedź, who conceived Agry Bagry, created Agi Bagi planet.

After having our idea, we decided to make an animation of the story and started to look for financing in order to develop the idea and characters as we traveled through the big festivals in Europe, searching for possibilities to develop the project. We presented the idea of the characters and story to gather feedback from the market. We received positive and negative feedback many times, and because we wanted to create a high-quality project, we had to try to make the best use of the feedback.”

She continues: “Finally, we could get funding from the Polish Film Institute (PFI) in 2012 and thanks to their support, we could initiate the development of the TV series Agi Bagi. Later in 2013, with the support of the PFI, National Audiovisual Institute, and our co-producers, we were able to start the production. It began broadcasting in April 2015, and has been aired in 40 countries, spanning Europe, Asia, and Africa, but we have not gotten the distribution to America yet. It’s not easy for a European production, but we’re striving to knock the door of America. In any case, this is our first success. ” 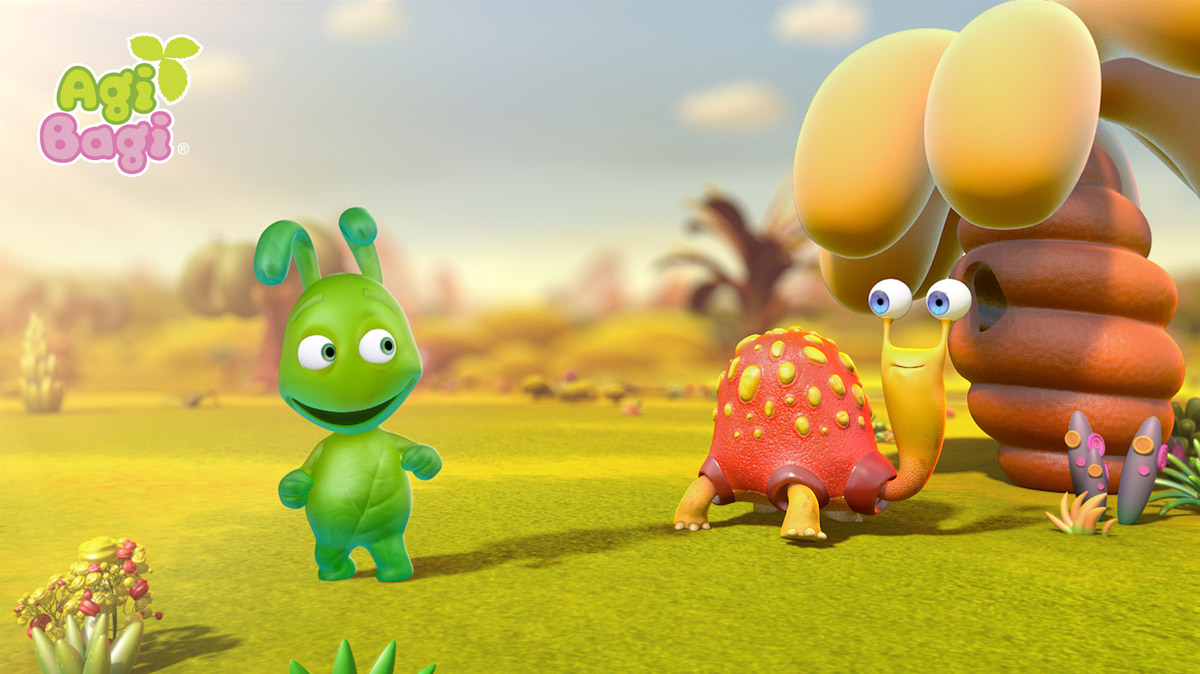 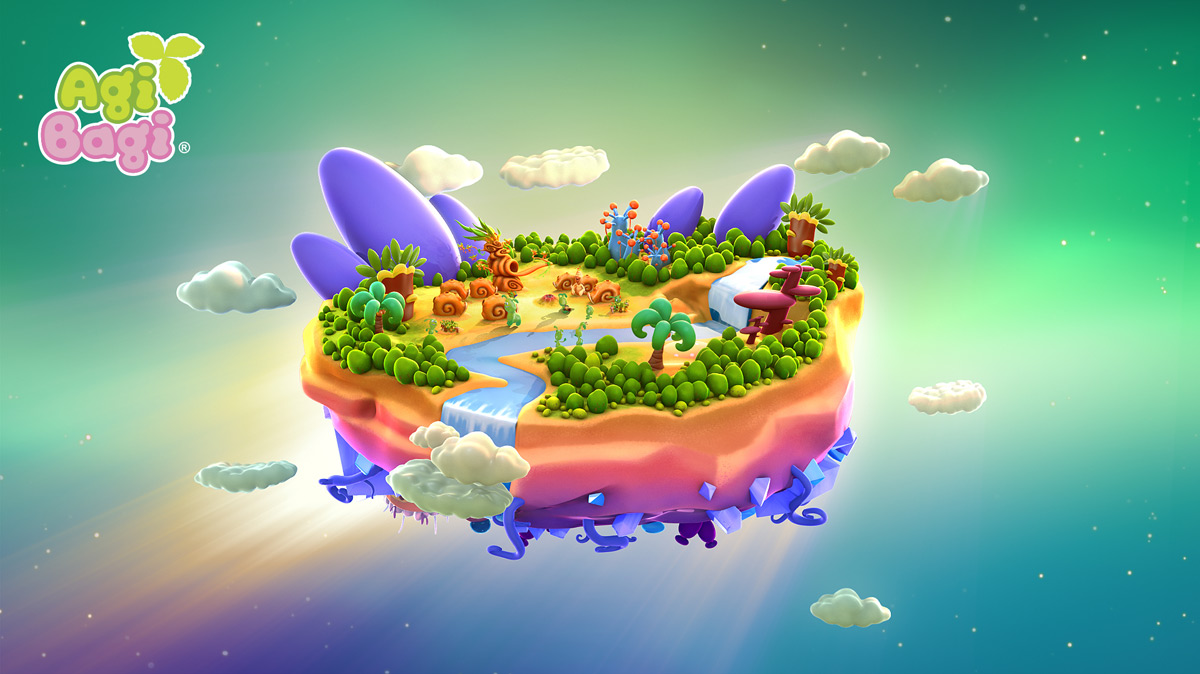 The script competition that they held once, was enough for them. Osak says: “The director and scriptwriter of Agi Bagi had another great story idea. He told me and Tomek Paziewski that he wanted to make an animation about a flying bear. He had such an amazing idea, which included more action than Agi Bagi. He made a realization, in which he remarked: “We’ve forgotten that there are a lot of interesting folk tales in the world”. In his new story, we discover a world with many legendary and mysterious creatures. We decided to bring that to life. It’s our second TV series, and it’s titled The Flying Bear and The Gang.”

Badi Badi is currently working on two new projects. She describes them to us.

“After we made a short trailer of The Flying Bear and The Gang, we presented the project to a distributor. They told us that it’s very interesting material for a feature film. They told us, in fact, ‘why don’t you try to make it into a feature film?’. So, I applied to the Creative Europe program for the development of the feature film in April 2015. The commissioners of the Creative Europe liked the idea. They co-financed the development, and thanks to their support, we are preparing the script now. It’s a big project, but I believe it will be possible to complete an international distribution, because there are a few European titles, for example, the Spanish film Tad, The Lost Explorer. I think it’s possible to produce a successful animated feature in Europe, and we are looking for co-producers from European countries for the film.” 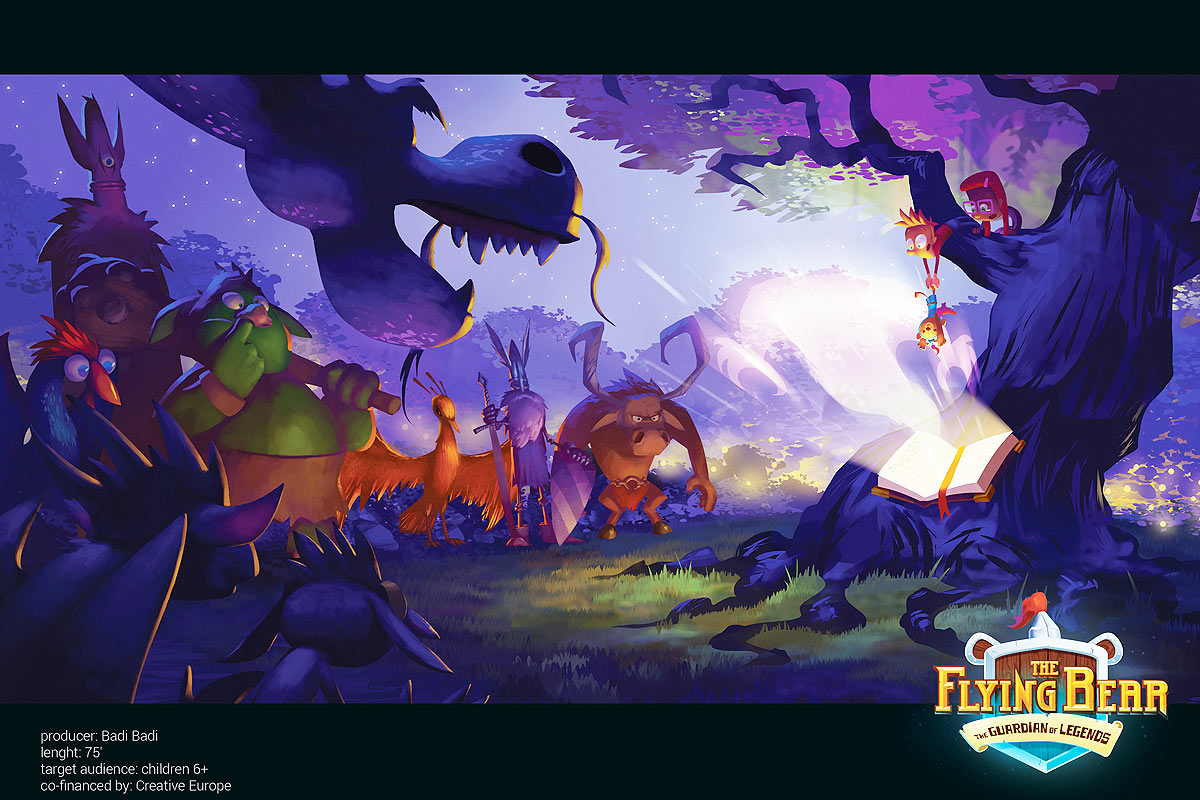 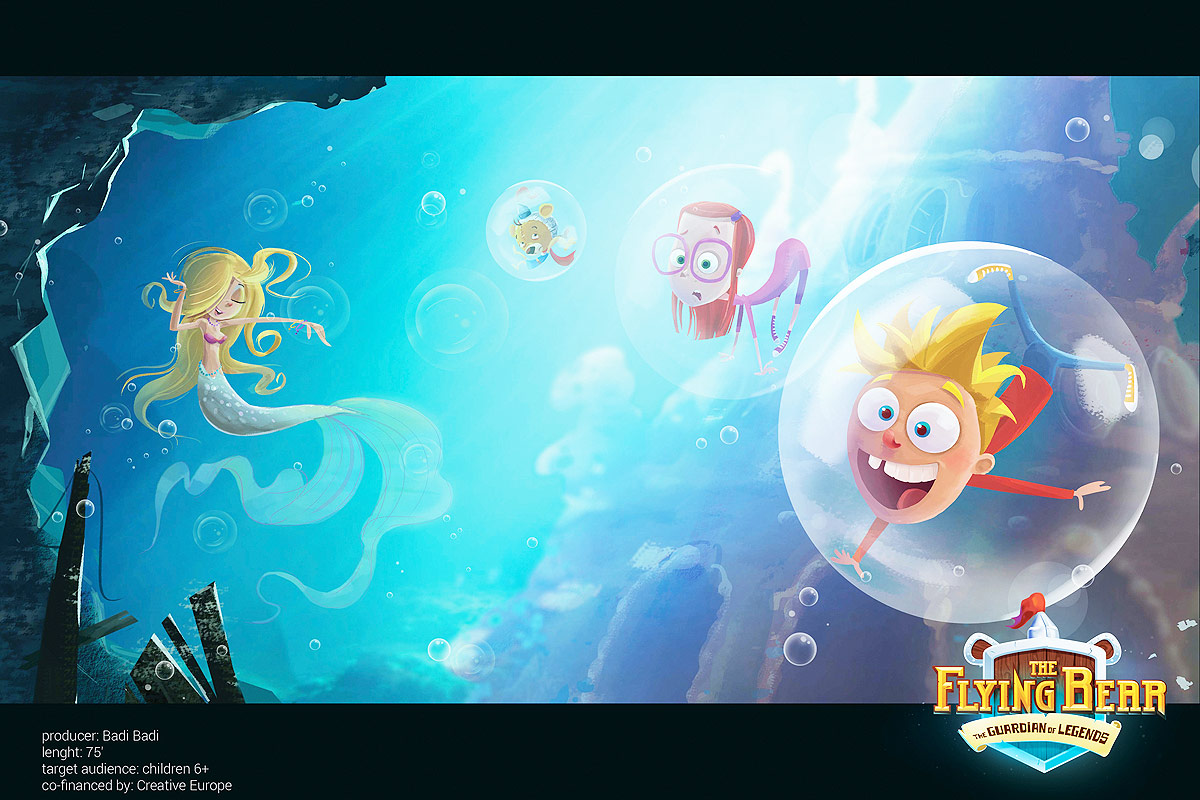 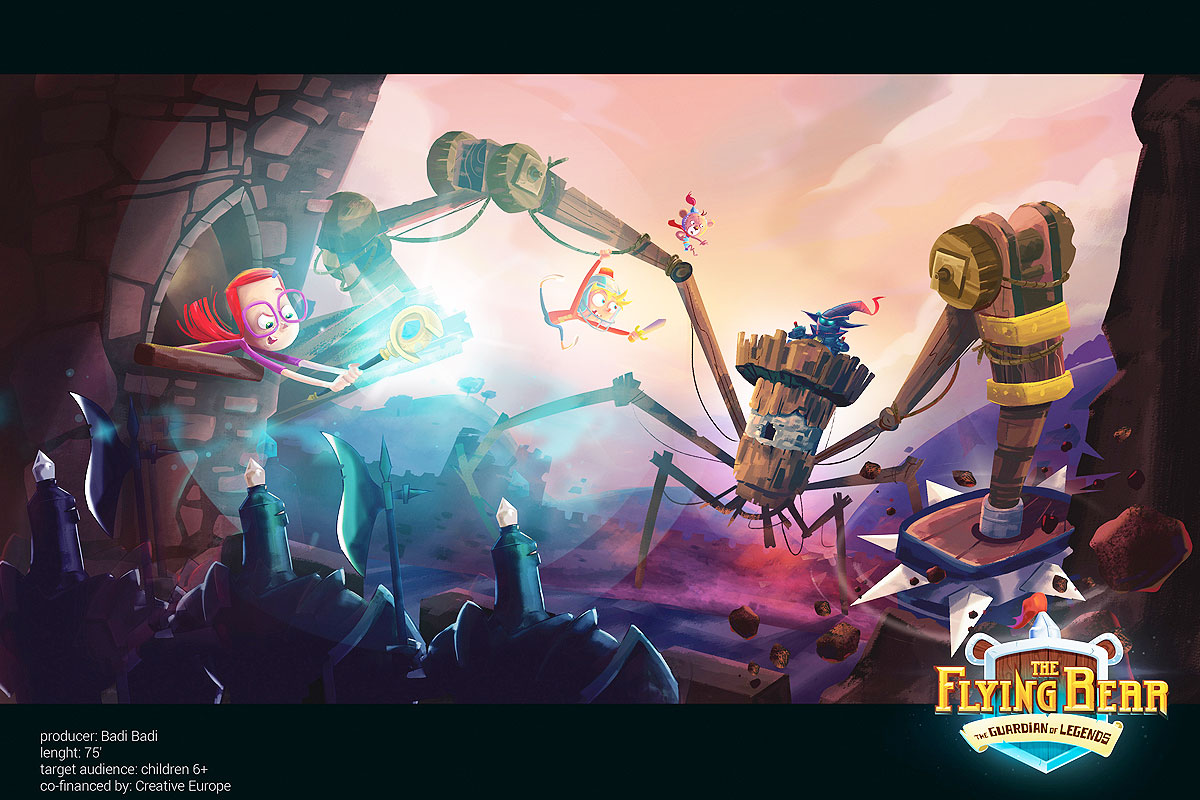 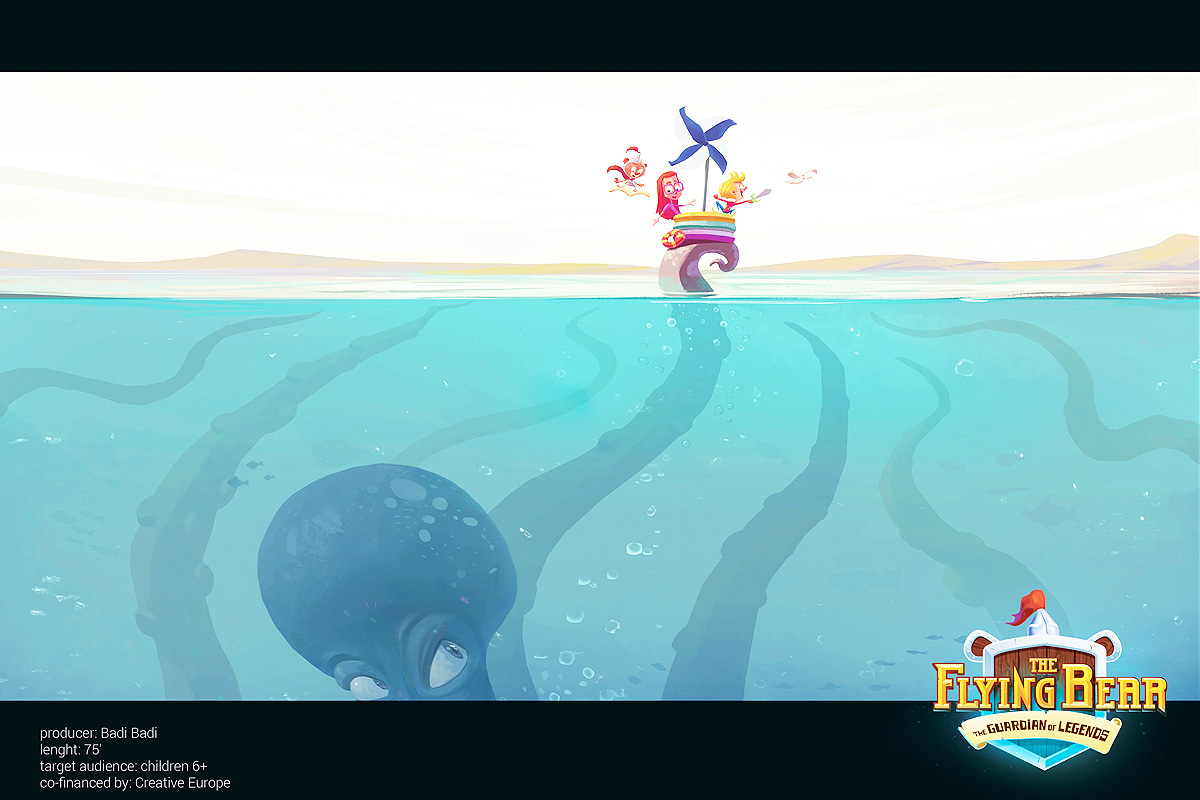 She adds: “Our newest project is a 2D animation project titled The Wriggles. It’s still in development, but we’re almost finished with the first episode. It will be a TV series written by Marzena Nehrebecka, the daughter of Władysław Nehrebecki. Władysław Nehrebecki is very famous worldwide for his TV animation series Bolek and Lolek.” 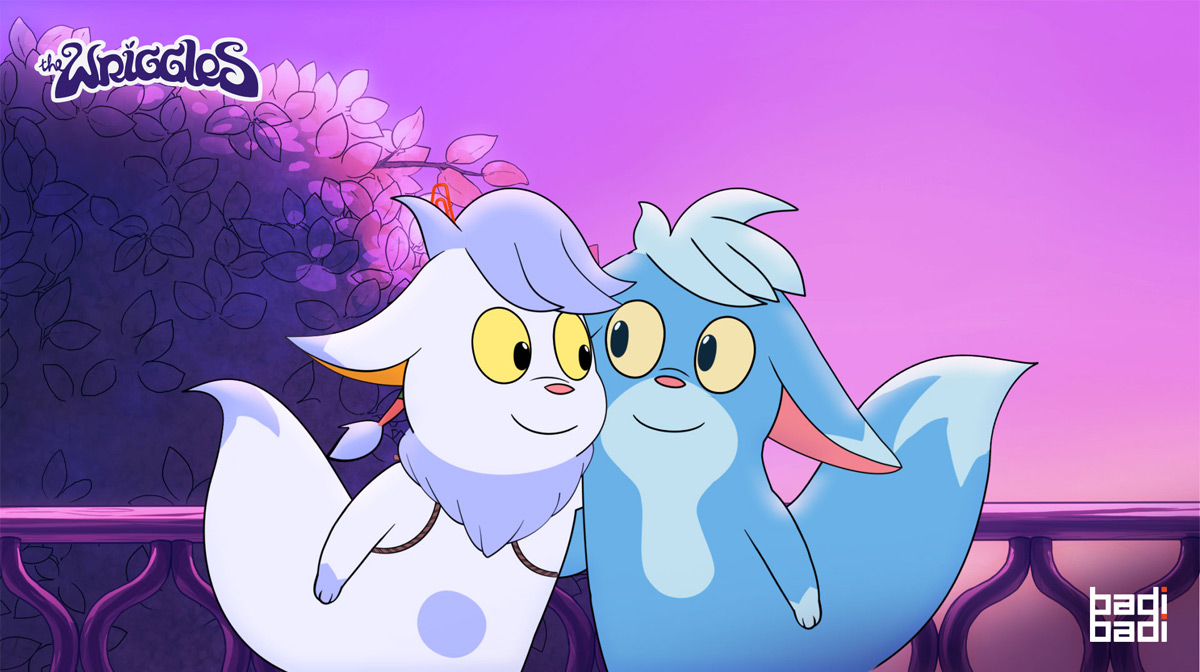 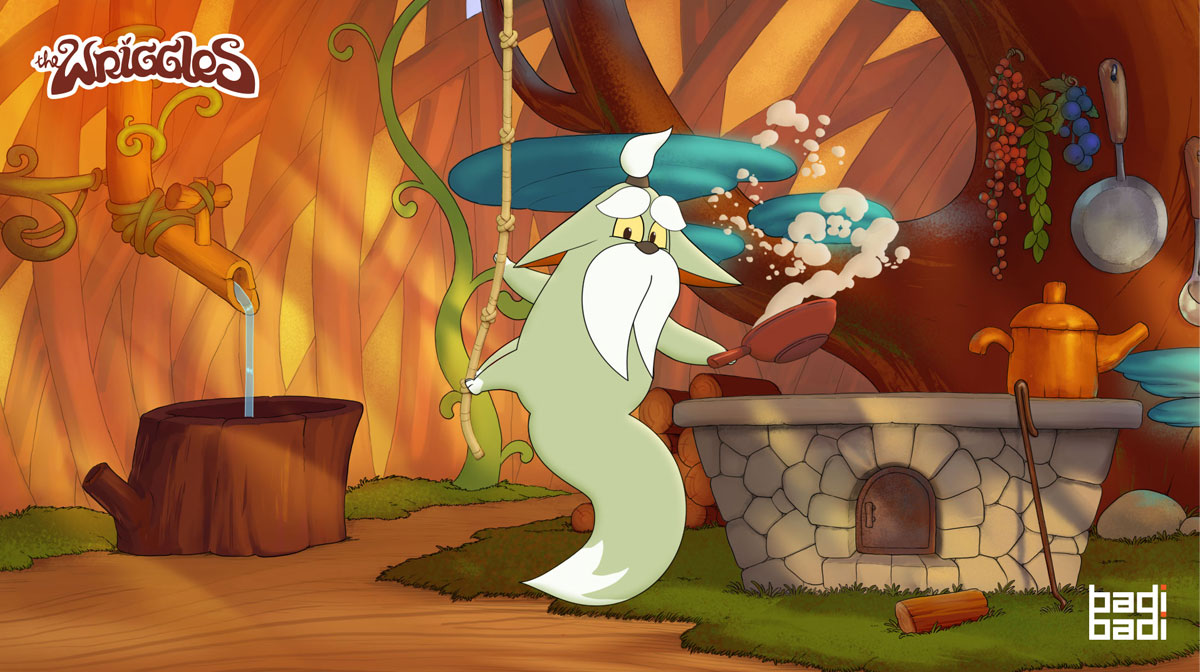 To receive funding and getting distributors is quite a difficult challenge to achieve, but is indispensable for making an animation project a reality. In terms of their journey to get funding and distributors, Osak explains:

“Of course, with distribution and funding, these two matters are the hardest in the whole process of creating original IP, specially for a small studio without any blockbusters in their portfolio. It took around 3 years to start the production of Agi Bagi, from concept to realization. As I said, the scripting contest was back in 2011. From that moment on we’ve been looking for investors, partners, co-producers and other possibilities of financing. With support from our co-producers, namely Music Production Studio SPOT, Zavand animation studio and Animoon, we were able to convince the experts, gain their trust, and most importantly receive financing from the Polish Film Institute. Sure, we had to make multiple attempts, but at last we did it! And from the very beginning, our sales agent Your Family Entertainment has given us very good, and important, support.

Later on, we also received financing from the National Audiovisual Institute, and with our completed budget, we were able to start the production. Now we have our first season (13 episodes) of Agi Bagi, which is broadcasted in 40 countries, and we will finish another 13 episodes for the next season this September.

In Poland, Agi Bagi has been becoming a big success, so that means for us that it is easier than before to be recognized as a studio producing popular TV series for kids. It enables us to continue production of Agi Bagi and create the other IPs, The Flying Bear and the Gang and The Wriggles, at the same time.”

After the interview Osak told us that they have received the financing for the third season of Agi Bagi so they continue their work and next year they will have finished 52 episodes in total.

We asked her about how they select the project they will take part in. She answers: “We place trust in artists. For example, Tomek Niedźwiedź is very talented. He told us his new story idea, which is about a bear who can fly using magic. It’s an awesome story, and we decided to create the animation of the story. After meeting talented artists we believe and trust their talent in, we hear their ideas, and we support them to make their idea become a reality. So we got together and developed a new TV series titled The Flying Bear and the Gang.”

One of the characteristics of Badi Badi’s animation is the aspect of giving children learning opportunities. Osak explains: “Agi Bagi teaches children the importance of taking care of ecology. Kids can learn the importance of communication, traditional music of many European countries, and so on, and making that a lot of fun, through The Flying Bear and The Gang. We used many traditional music, like Irish country music, in the story. Characters from Denmark, France and Germany also appear in the story. We researched old stories in Europe and dropped the many great traditions of European countries into the story, making our animation a very international experience. We want to inspire children to read and learn about more old legendary tales in Europe with The Flying Bear and The Gang. Agi Bagi is giving kids the opportunity to learn fundamental life lessons such as being a good human and how to communicate effectively.”

Osak remarked that the current Polish animation industry is changing. Polish animation for kids has been through quite a harsh period. There was almost nothing. But the situation completely turned around during these past few years. She says:

“Now, the Polish animation industry is very powerful. The Polish Animation Producers Association has a stand here in Annecy, and we bring thick catalogs with information on 20 to 30 good animation studios. The quality of Polish animation is becoming better and better. And we are diligent and very open to learn anything from studios in different countries, and we are also open for co-production. Our market is growing at a high rate. I think the past few years were the rebirth of animation for kids in Poland, and we are aware that this is only the beginning. I can say that in the near future, maybe even in few years, there will be a large Polish animation industry, and that is my promise!”

Agi Bagi (13 x 11 minutes): There is a small planet in outer space and the planet has two sides called “Agi” and “Bagi”. Two tribes called “Agingas” and “Bagingas” inhabit each side of the planet. Agingas and Bagingas take care of their local plants and animals, respecting the natural world on their side of the planet and preserve the joint Agi Bagi ecosystem. The series tells about the adventures of two protagonists, “Bodjo”and “Zeebee”. They live on the planet “Agi Bagi”. Every episode tells a new story about their natural co-dependence and how they solve a problem related to the environment. This series has essential educational elements that are so important at the stage of child development we are targeting as the audience.

Song: Listen to the Flowers 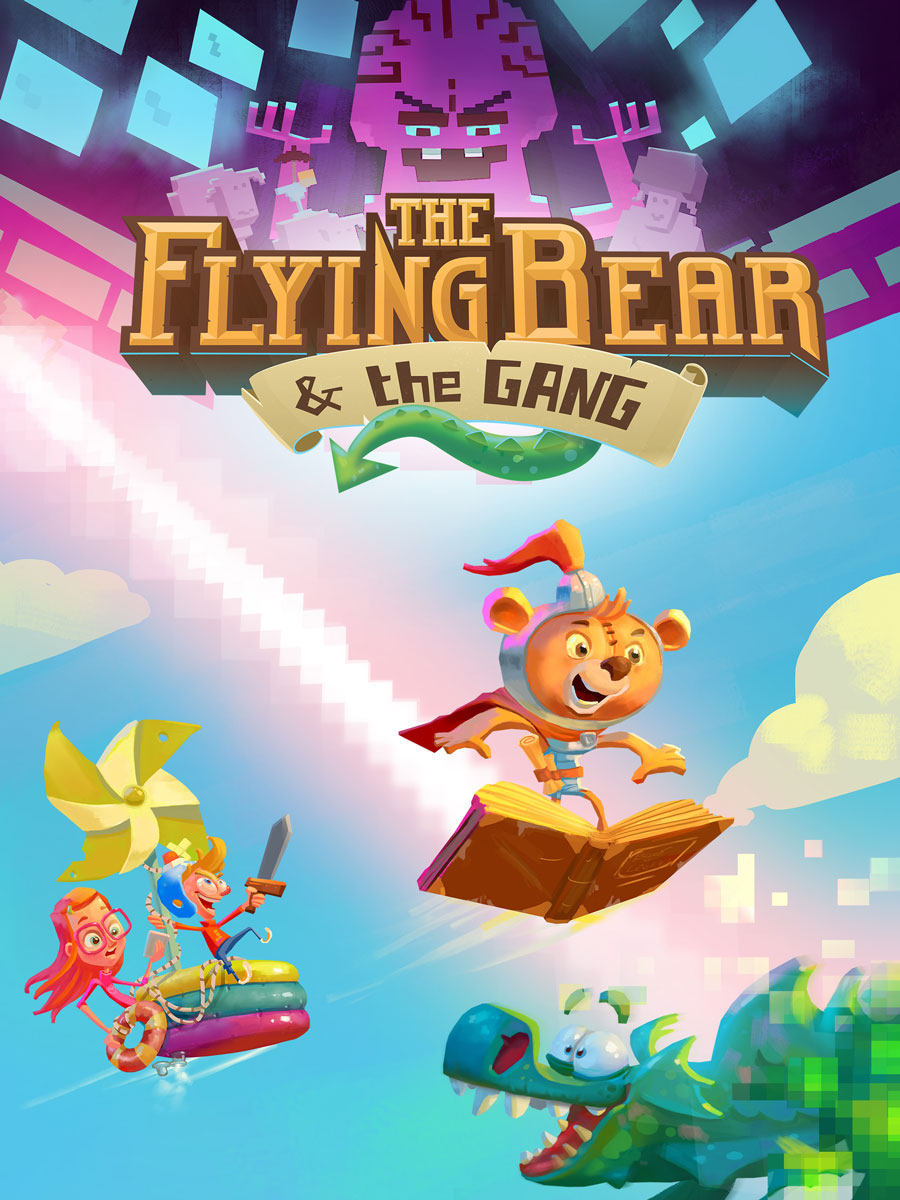 The Flying Bear and The Gang (13 x 11 minutes): It is the adventures of a brother and sister: 6-year-old Jake and 9-year-old Madeleine. The computer virus CYBER tries to kidnap heroes of folktales and legends in the world. In order to make his army with the heroes and legends to conquer the universe, CYBER wants to digitize them into cyberspace in order to take control over them. Jake and Madeleine help a bear, who can fly by using magical powers, to prevent the kidnappings of CYBER. This series give children opportunities to know many different folktales and how traditional cultures relate to it in the world.

The Wriggles (13 x 11 minutes): You can meet Wriggles, squirrel-like creatures and their friends through this fable. On one evening, a strange creature Blowzy Black takes a little Wriggle, Bubi, for a ride on a giant moth and Bubi’s adventure begins. In this series, Wriggles make a great team to deal with some small problems through their adventures. Each of the Wriggles are unique, but they are all bonded by friendship and sense of humor. Thanks to their ingenuity and solidarity, they overcome difficulties in their adventures safe and sound. 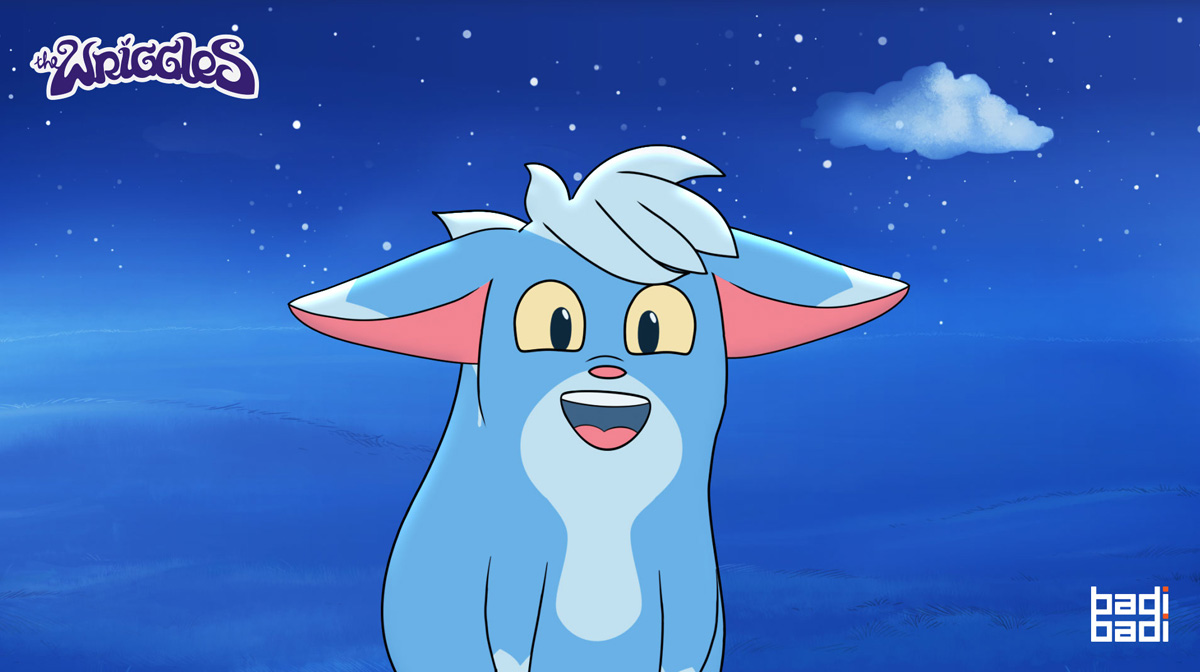 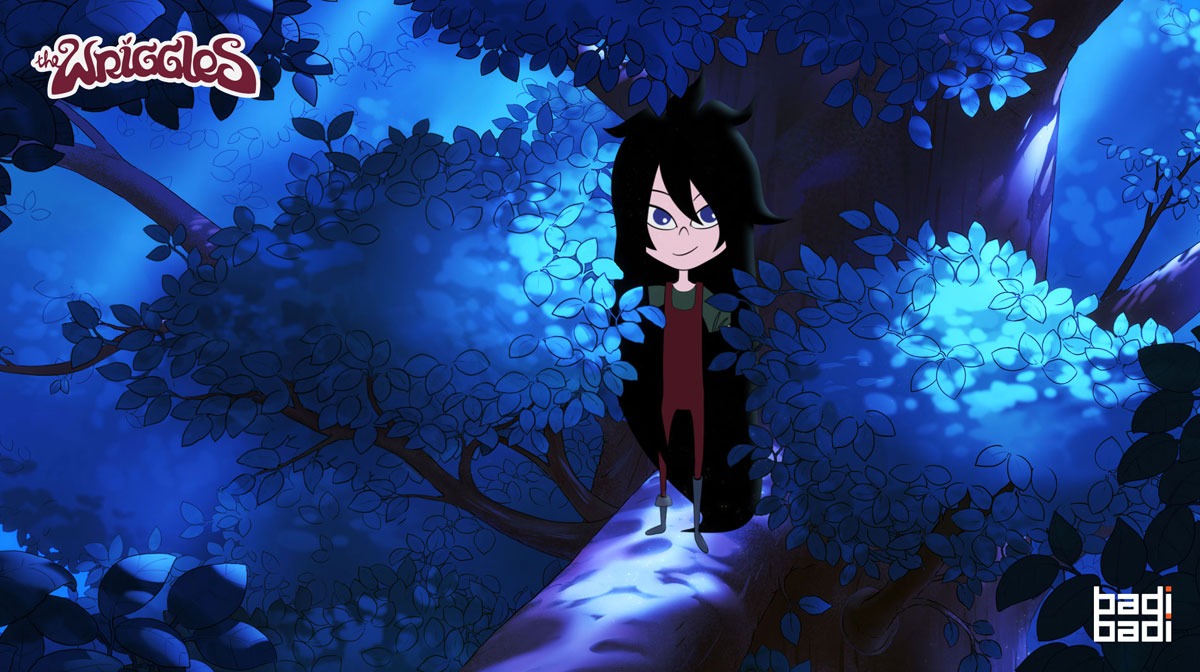