01. The grand-scale VFX on “The Witcher”

The Witcher is one of the most popular original Netflix series that is gathering a lot of attention right now. According to Netflix, 76 million members watched the series within the first four weeks after the series was released on 20th December 2019. It is a fantasy action-adventure story of the protagonist, Geralt of Rivia, based on the book series of the same name written by Andrzej Sapkowski, which has sold more than 40 million copies around the world.

VFX is, of course, one of the most important elements in production that needs to be able to meet the high demands of this fantasy series. Thanks to great help from Maciej Ziętara at Public Dialog, we could interview Mateusz Tokarz*1 (VFX Supervisor), Krzysztof Krok*2 (VFX Producer) and Michał Niewiara (Title Sequence Art Director) of the series from a Polish studio, Platige Image. We are happy to share the insightful story behind the VFX creation of the globally successful series.

*1: Mateusz was responsible for bidding, project planning, quality control and contact with the client, as well as  compositing a few shots. Mateusz has been in Platige Image for more than 5 years now.
*2: Platige Image’s VFX Producer working closely with Matt Tokarz and managing breakdown, bid, planning and scheduling of facility resources to ensure the project is delivered on time and to the highest quality.

Geralt of Rivia, a mutated monster-hunter for hire, journeys toward his destiny in a turbulent world where people often prove more wicked than beasts.

Animationweek (AW): Could you please let us know the role of Platige Image in The Witcher series on Netflix?

Mateusz Tokarz: Platige Image was an IP holder, that’s how it started! Worldwide, we were well-known for our game cinematics and commercials. Our clients know that we’re a reliable partner in these areas. Our film projects were mainly from the Polish market, but we really badly wanted to be part of the global The Witcher post production team.

At the very beginning, we were not sure what the budget would be and the scale of the project. When we realised how big it is and that we’re a part of it, we were super excited. Our journey started at the end of year 2018 – we were helping production with some research and development before the shoot. Ultimately, we were one of the five studios working on the VFX for the first season.

Michał Niewiara: I worked since 2015, together with Tomasz Bagiński on the abandoned movie project and all related concept art. It was a fun ride, but also a huge responsibility. That’s when Netflix showed up and most of the artistic duties have been handed over to Andrew Laws (production designer) and his team. I would never think I’d have the privilege to help design the series’ logo and later the very medallion now worn by Henry Cavill. 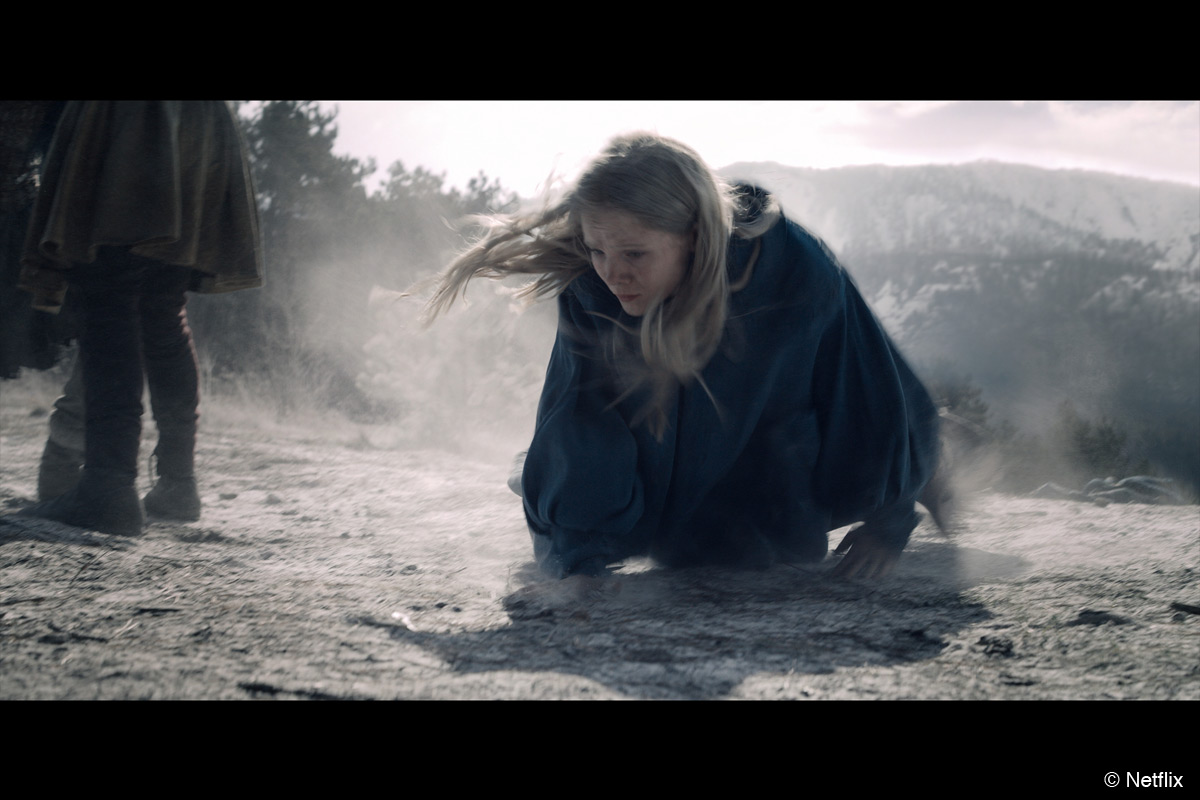 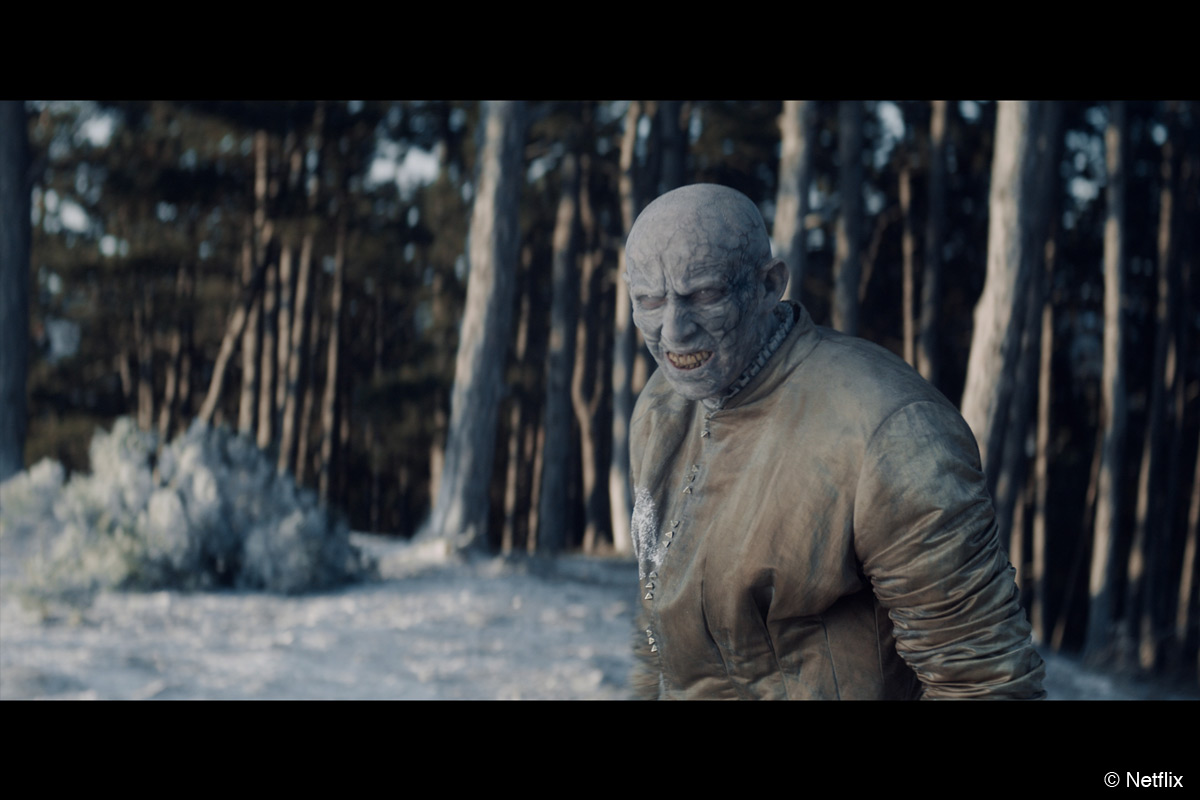 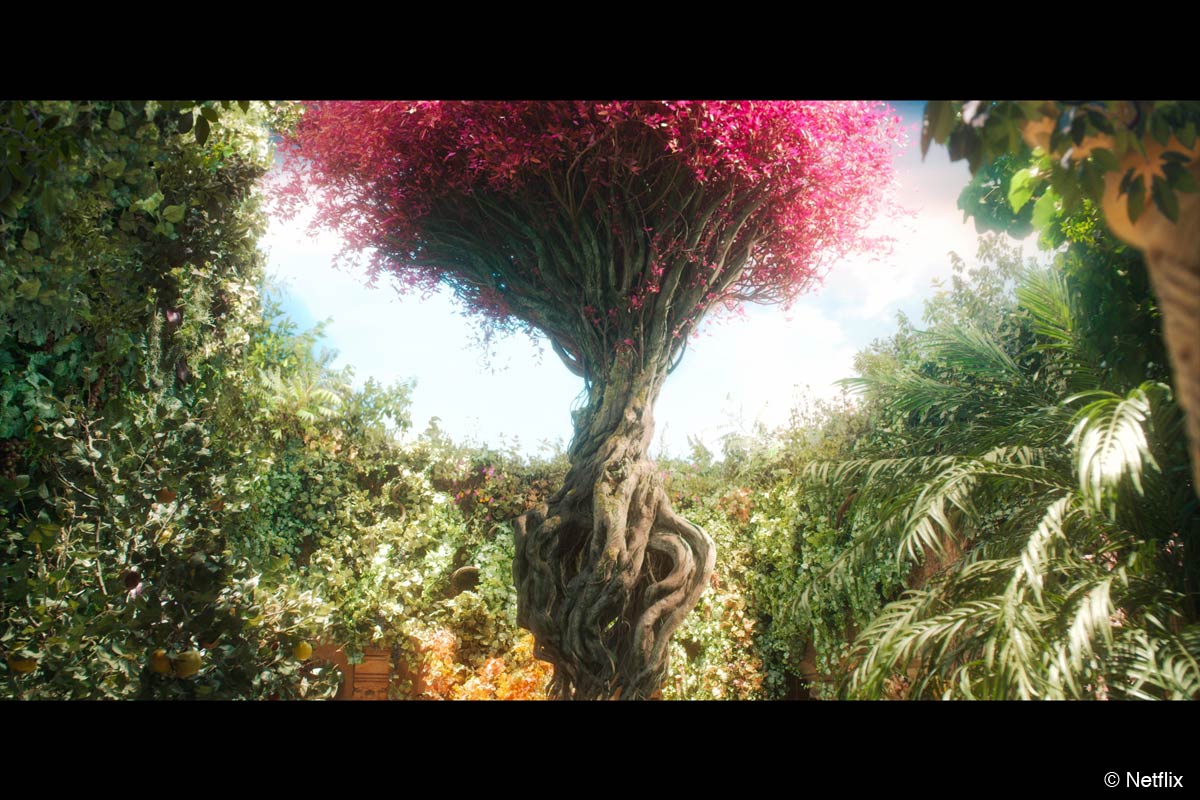 AW: How was the team structured in Platige Image for the first season of the series? How big was the team? What do you think is the most notable characteristic or strength of them?

Mateusz Tokarz: There were around 130 people total. It’s a big number, but a lot of people wanted to do at least something, just to be a part of this project. There’s a lot of hardcore fans in the company. In the core team there were around 30 amazing, dedicated people who made it possible to finish the project on time.

Mateusz Tokarz: Everything was managed by the Netflix postproduction team. There were few shared shots between us and other studios. In most cases both studios were working simultaneously, but always one was chosen as a finishing studio and responsible for delivering complete shots. When the other studio’s part was finished, they send their final render and then we would apply our effects on top of them. For a few shots we were exchanging FX setups, digital matte painters and Nuke scripts.

AW: What was your first impression of watching the full, completed episodes of the first season, as a VFX artist? What are your favorite scenes, or the scenes you want the audience to relish the most?

Mateusz Tokarz: It was a really nice feeling. We were watching the first few episodes in the company, together. Then I watched it again at home with my family during Christmas. There were a lot of people who were talking about it (apparently everyone in Poland!), so a lot of people wrote congratulatory messages and their admiration for the work that all the studios did in this project.

My favourite sequence is one with Shan-Kayan Tree in the enchanted forest. We had to show it in shots during the day and in Ciri’s vision as well. It has very vibrant color correction in the trailers and fans loved it. On the other hand, in some shots from this sequence we’ve replaced around 75% of the screen with CG renders and it was demanding to match the very stylised lenses that were used there. 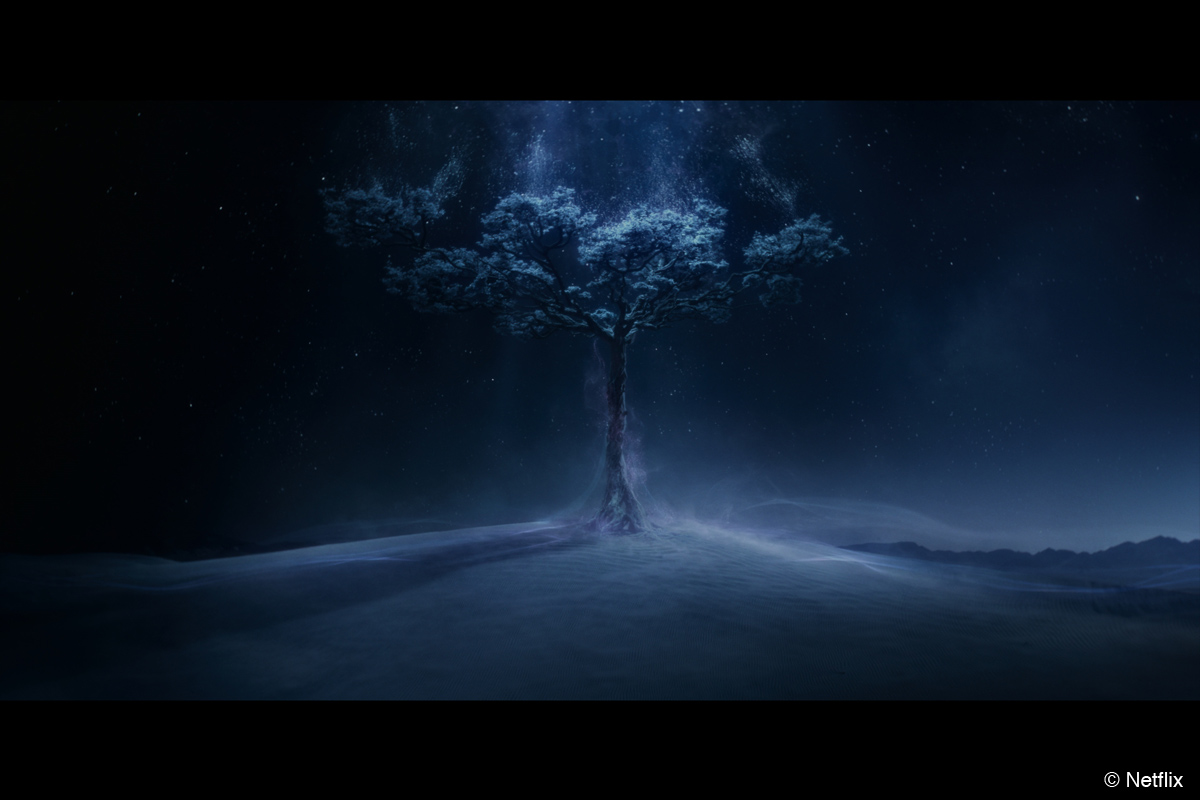 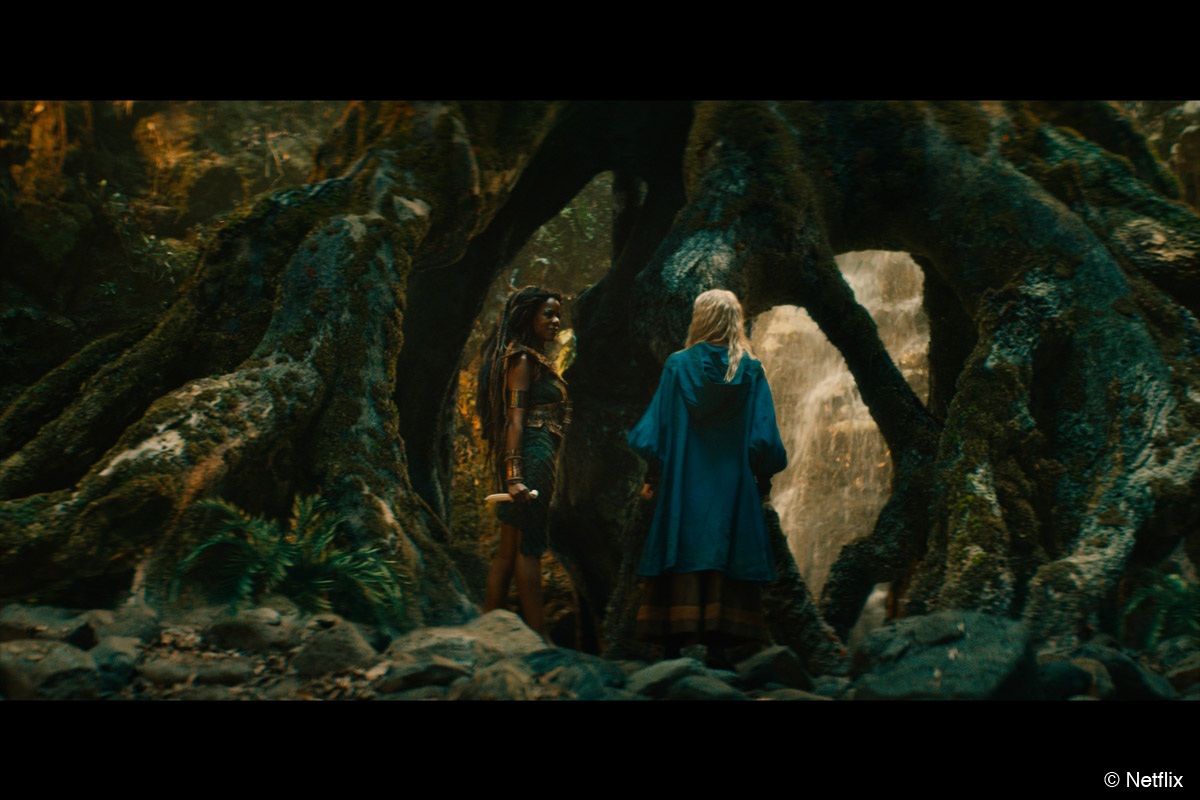 There’s also a funny story connected to this episode, which was one of our first bigger deadline. We were sitting long hours the day before and agreed to come earlier on that deadline day. I was a little bit late, but when I arrived I realised that Rafi – our Art Director – wasn’t there. Chris texted him and a few minutes later he said that Rafi won’t come – he is in the hospital. I didn’t believe it and said “All right, call me when he comes” and left to my room.

After 15-20 minutes I got back to the review room and asked what’s going on. Chris told me that he wasn’t joking and showed a photo from the hospital that Rafi sent him. He broke his arm on an electric scooter. It was one of these moments when you’re doing crazy overtime, but you’re so pumped up that it’s hard to believe that something may go wrong. Fortunately these sequences look fabulous and maybe because of that I really like them. We’ve also taken care of many shots in the final battle. The entire crew did a wonderful job on set, and thanks to that it was a pleasure to contribute and make it even cooler.

AW: We would like to ask three more questions on the technical aspects of what you and Platige Image did for the series. Could we hear about the digital environment of the Platige Image team, mainly on software?

Mateusz Tokarz: We’re using pretty much everything that is industry standard these days. Our main 3D software is Maya and Houdini. Substance Painter for texturing. Nuke for compositing. PFTrack for camera tracking. Everything is connected with the use of our inhouse pipeline that we’ve developed over the years.

AW: Could you please tell us some of your visual achievements in the series that you are particularly satisfied with and the technologies that enabled you to develop them?

Mateusz Tokarz: We were mostly responsible for magical effects – portals, spells, signs – but also environments and a lot of other various types of work. 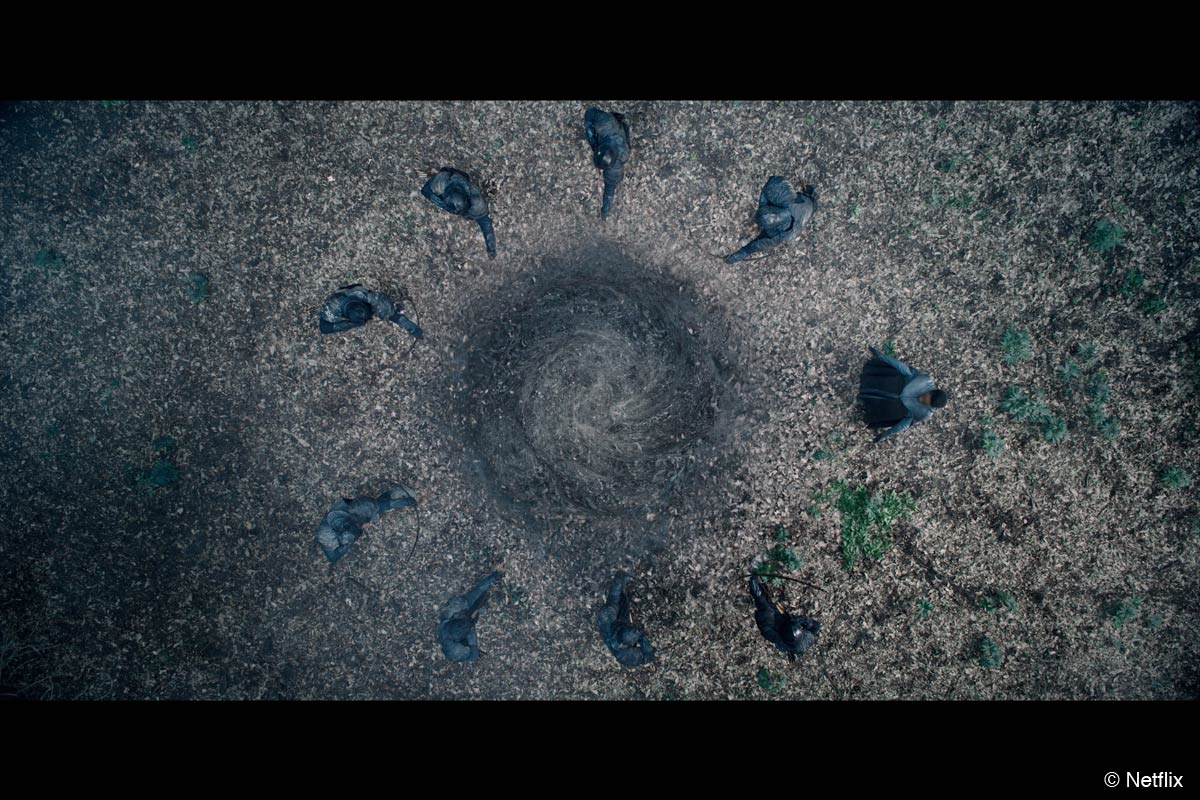 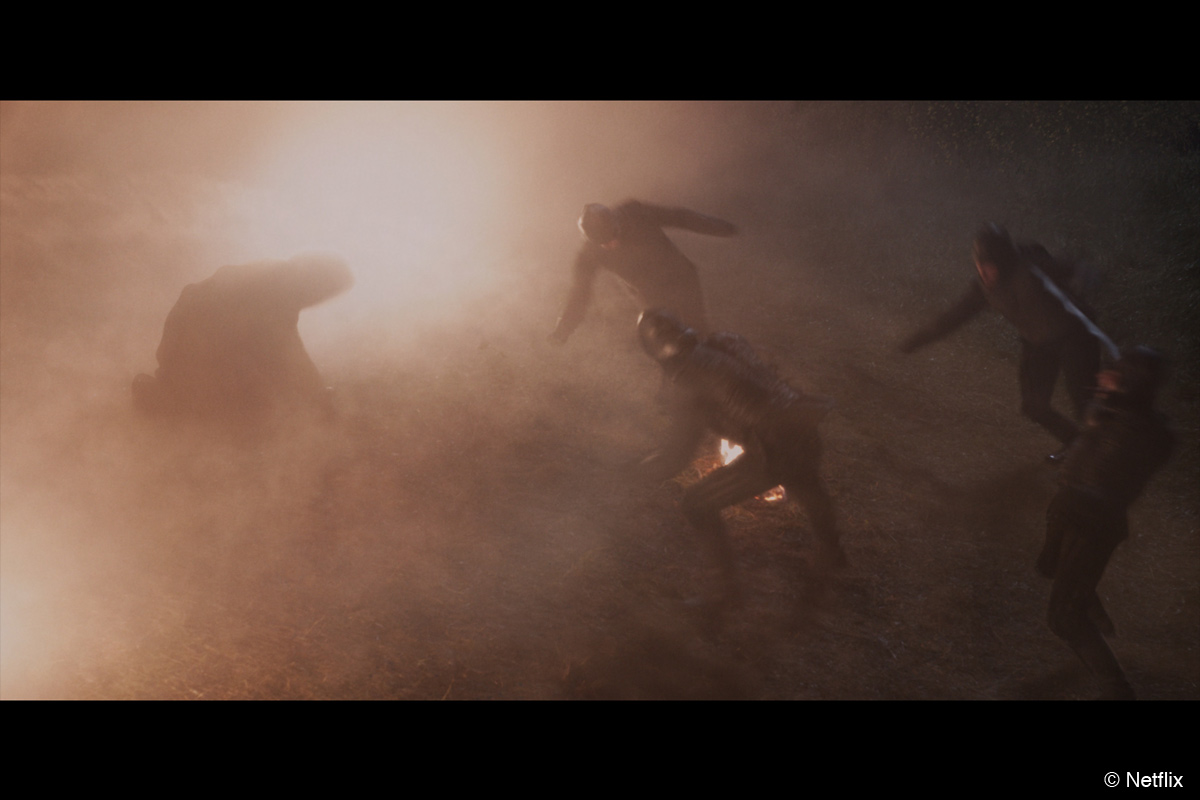 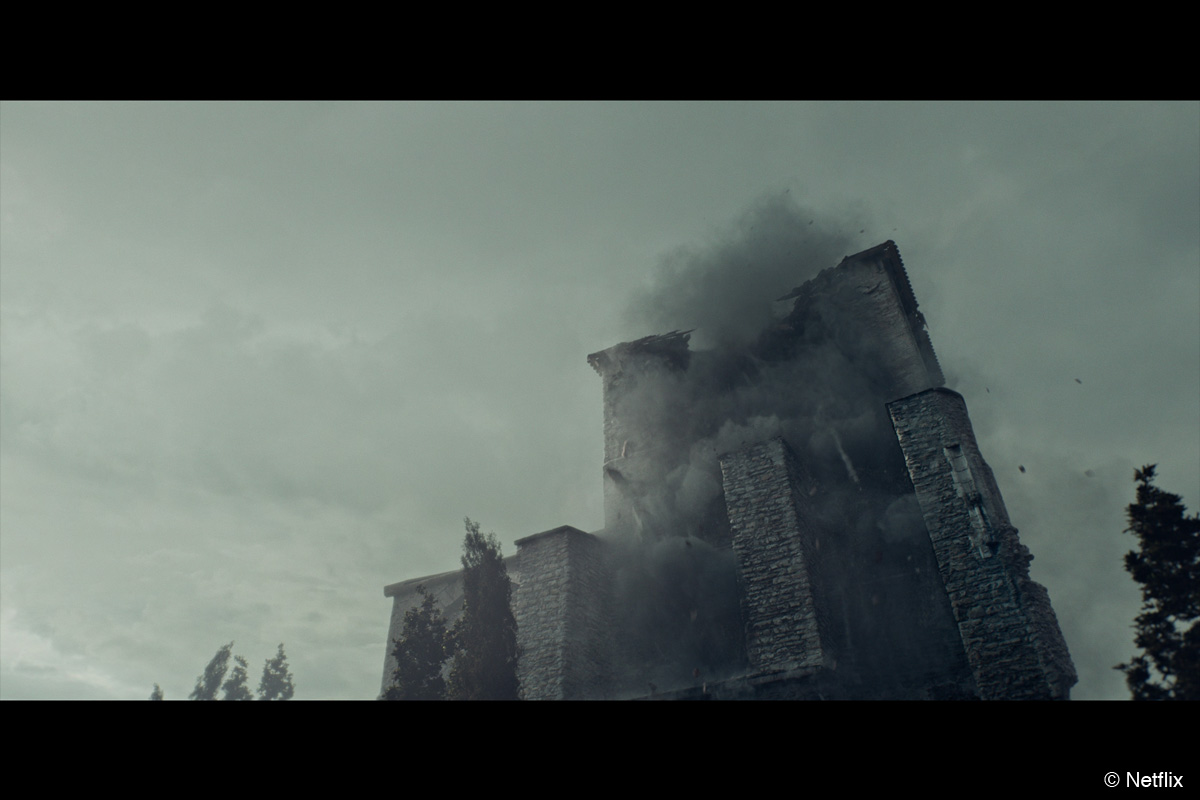 Krzysztof Krok: One of them was Yennefer’s and Istredd’s portal created in Aretuza (2nd episode). It was one of the first magic effects that we started developing very early in the production. It was evolving and needed some adjustments when we got the raw footage from the set. We understood then how flexible the FX setups were as well as our thinking on how magic has to be.

Mateusz Tokarz: We’ve spent a lot of time researching practical physical phenomenas to be able to create effects that are subtle and elegant. In this case it wasn’t easy – there’s not much real life examples of magic and not many superhero movies. 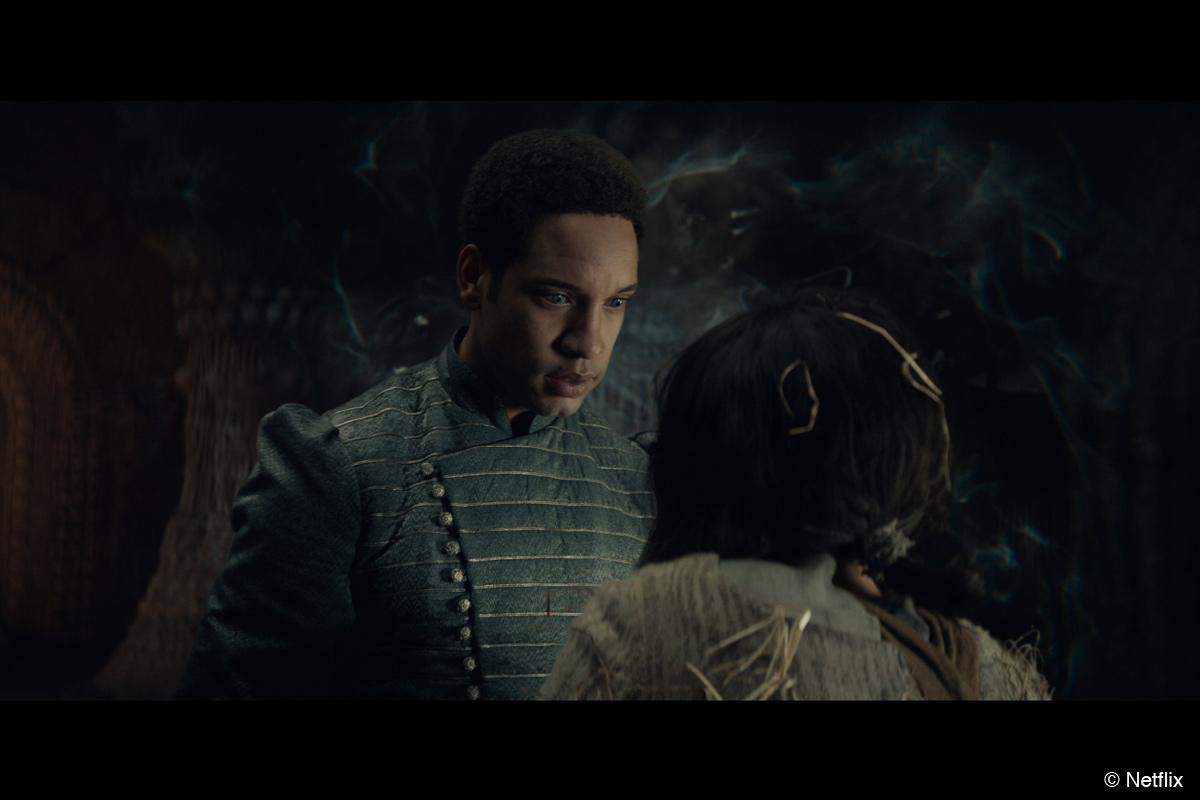 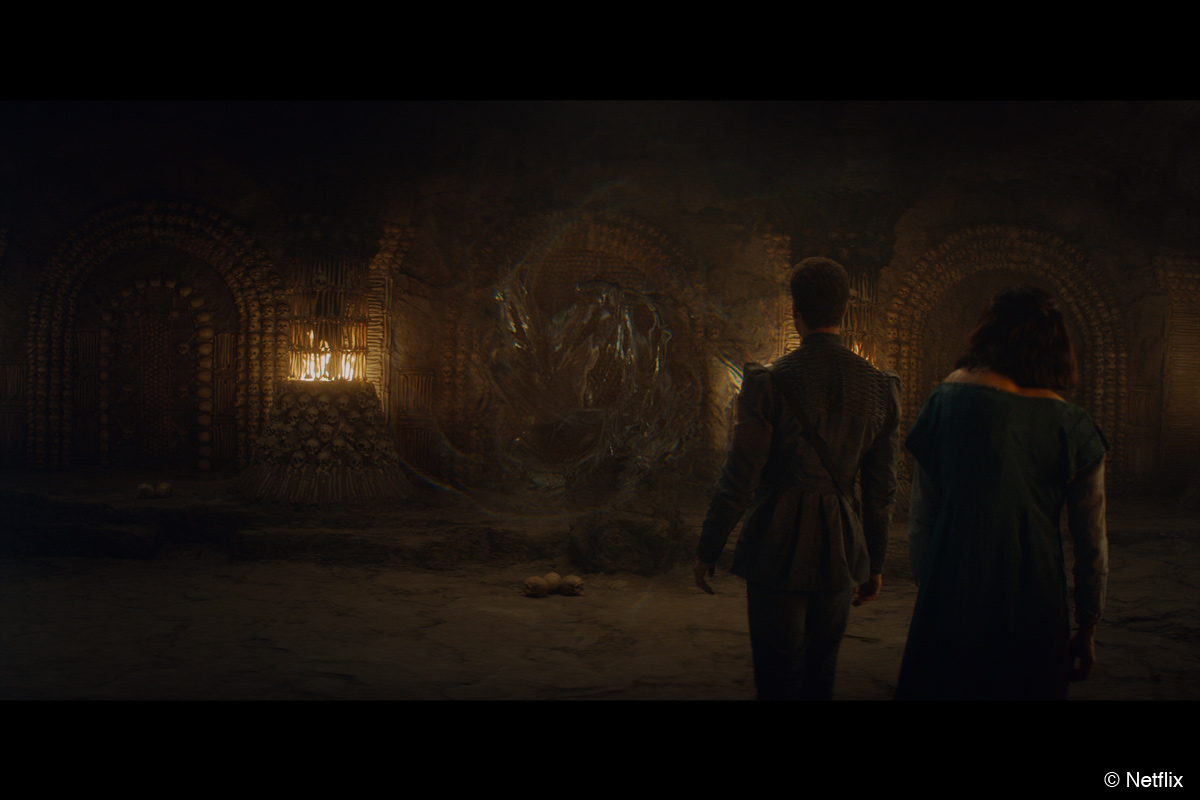 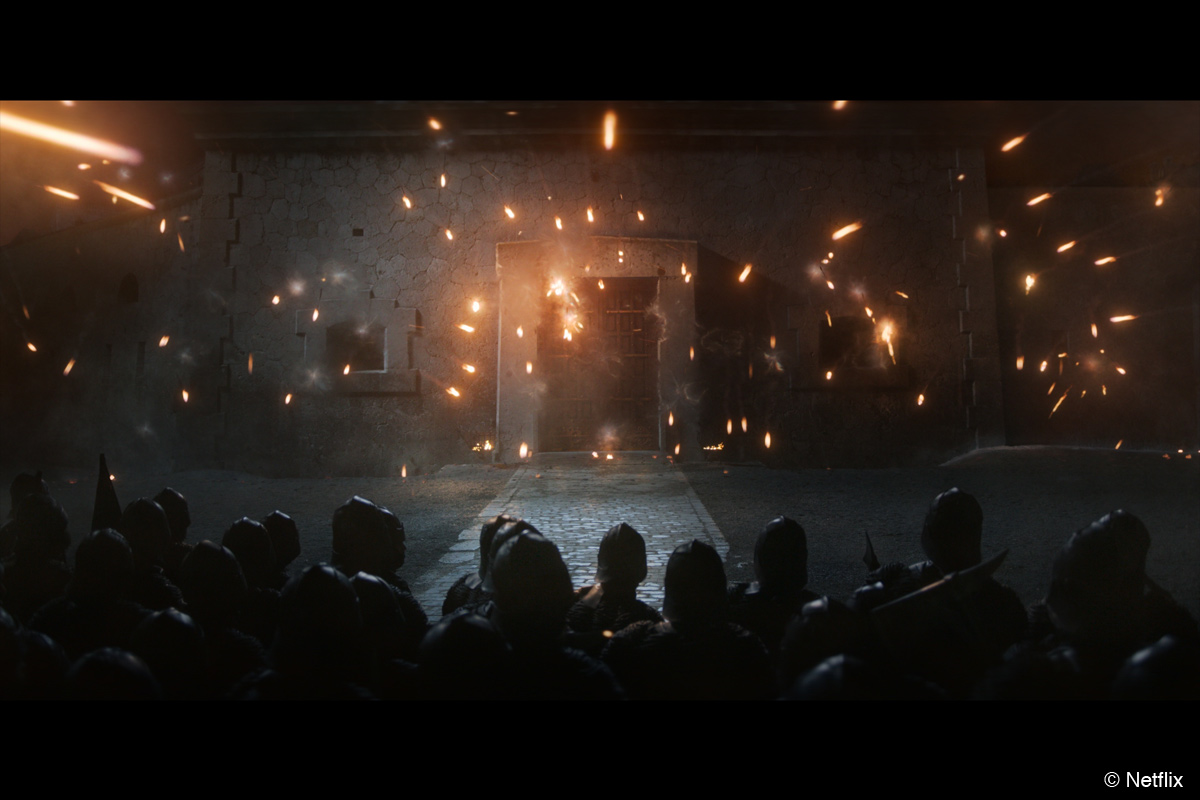 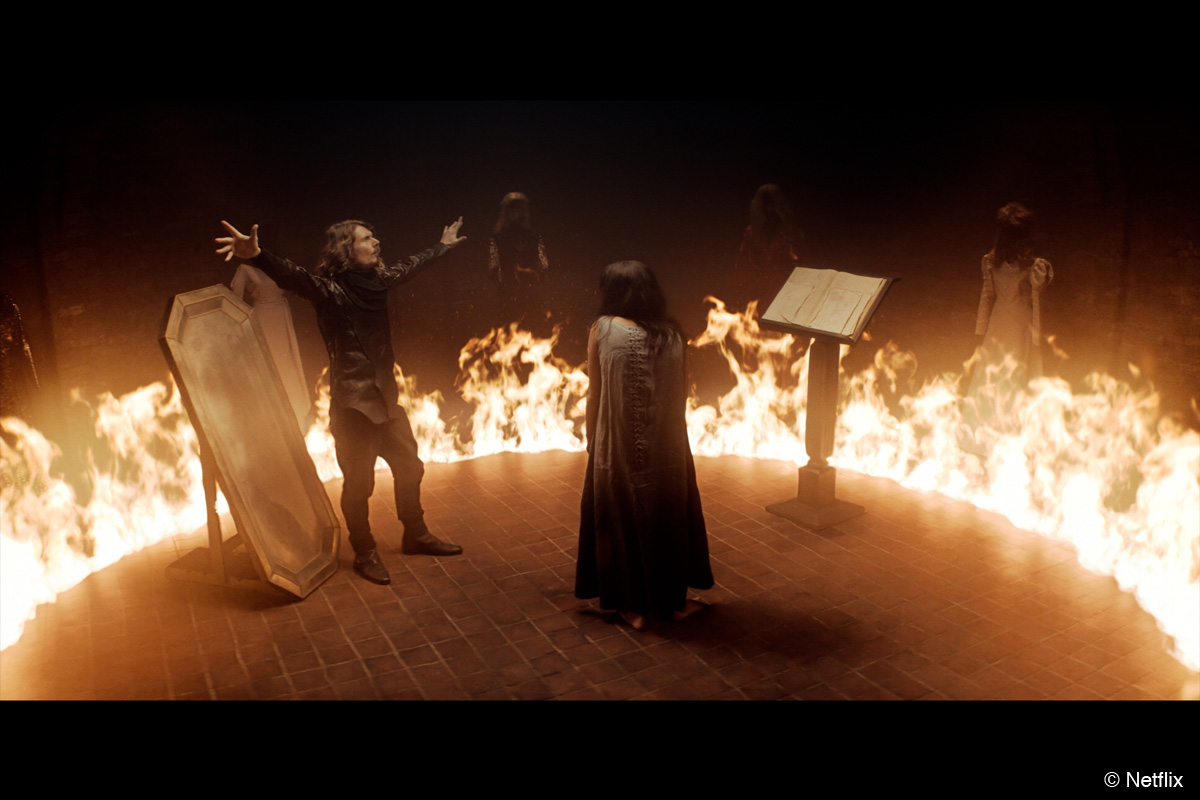 AW: Are there any technical challenges you would like to face head-on for the second season?

Mateusz Tokarz: We’re pretty experienced in CG character animation but there were not many opportunities to create it for VFX in our studio career. We’d love to explore it more for upcoming seasons.

01. The grand-scale VFX on “The Witcher”