08. Pixelatl Festival 2020: A Programme for the Creative Industries of Mexico and Latin America 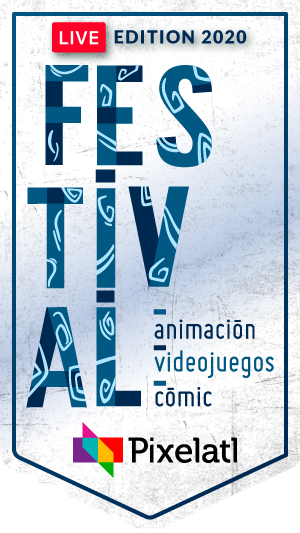 From 31st August, Pixelatl Festival 2020, one of the most important events for animation, video game and comic professionals in Mexico and Latin America, has commenced as an online version due to the COVID-19 pandemic. The festival consists of three main parts of the programme: the conference, business meetings, and film screenings.

According to Pixelatl, it is an international bonding and learning experience for all artists and entrepreneurs in the creative industries of Mexico and Latin America. Attendees of the conference and business meetings can meet with more than 150 guests: artists, creators, and executives from 17 different countries, including special guests from Cartoon Network, Nickelodeon, Netflix, Fox, Discovery Kids, Sony Pictures Animation, Disney Animation Studios, DreamWorks Animation TV, Amazon Studios, and BBC. The film screening programme includes 19 fine short films as the official selection.

Hideki Nagaishi (HN): Could we hear the history, the primary goal, and the uniqueness of the Pixelatl Festival, in brief?

José Iñesta: Pixelatl started 9 years ago when there was no animation in Mexico. Only Anima Studios was producing one feature film per year at most and there was no studio interested in developing animation series. We found that animation could be a new driving force for changing and supporting the development of our country and Latin America, because content and stories can help connect people together and erase boundaries.

In a country split like Mexico, we wanted to focus on something that could help us get together to become a community and work towards a common goal, which is how the festival started and also the uniqueness of Pixelatl. We want to change the world through good stories and art by bringing people together, and I don’t know if other festivals or markets pays attention to that.

HN: Could you please let us know the highlights of this year’s programme?

José Iñesta: Women are the highlights of our program this year! We have amazing talents from the creative side, like Rebecca Sugar (Steven Universe), Sofia Alexander (Onyx Equinox), Niki Lopez (Santiago of the Seas), Julie Scully (Duncanville), and Julia Pott (Base Summer Camp Island), and also some amazing leaders that have shaped the industry like Athena Portillo (several Star Wars animation series), Pilar Flynn (Elena of Avalor), Marge Dean (Crunchyroll, Women in Animation), and Magdiela Duhamel (The Casagrandes).

We also have a lot of Latinos participating in the event like Jorge Gutierrez (The Book of Life), Matisse Gonzalez, a Bolivian animator, illustrator and director, Lorena Alvarez, a Colombian illustrator, and a team of wonderful creators that will be showcased in a Cartoon Network Panel: Cinema Fantasma (studio), Axur Eneas, Matisse Gonzalez, and Ricardo Scioville. This year, we have over 150 guest speakers from over 17 different countries.

HN: What do you think of the current trend in the Mexican animation industry?

José Iñesta: Horror, comedy, stop-motion, and saturated colors are part of our DNA. When you combine all four, you get amazing storytelling and I’m sure the world will start seeing this. You can’t miss the Cartoon Network panel on Thursday 3rd September where they will talk about a stop-motion horror series, as well as a fantastic slapstick series, Toontorial, that will get a second season, and they also have a surprise that nobody knows about (it’s actually called “Surprise panel by Cartoon Network Latin America”). So, I’m thrilled to find out what they are going to talk about!

08. Pixelatl Festival 2020: A Programme for the Creative Industries of Mexico and Latin America