On the other side of the wall was a section for Star-Myu (see the stage report for details) with a photo spot and an installation of 28 gift boxes, where visitors could open them according to the number they obtained from the official website. Inside the box were gifts from each of the 28 characters, including original props which visitors could take home. Golden Kamuy had a photo spot where they also handed out posters to those who shared the photos on social media.

NETFLIX expanded their booth this year and had two event stages of its own, holding 13 events with 30 guests in two days.  This included stages for their original animations, as well as collaborations with other IP holders such as Pony Canyon, Avex Pictures, Production I.G., WIT Studio, etc.

The exhibition space was mostly dedicated to ULTRAMAN, their newest original full 3DCG animation available globally from April 2019, based on the hit comic title.  It featured an interactive fighting game named “ULTRAMAN BATTLE – Road to a Science Patrol member.” The movements of two players were projected and converted simultaneously onto the huge screen behind them, allowing them to perform special attacks as superheroes.

Besides Detective Conan and MIX, a new TV series, the main exhibit of the Shogakukan Shueisha Production booth was the newest Pokémon movie Pokémon the Movie: Mewtwo Strikes Back: Evolution, which will be in theaters in July. An enormous inflatable Pikachu flew over the booth, while people queued up to experience the “black light challenge”, where visitors would be led into a space where they could search for Pokémon monsters using blacklight torches. A mini calendar was given out to the participants. 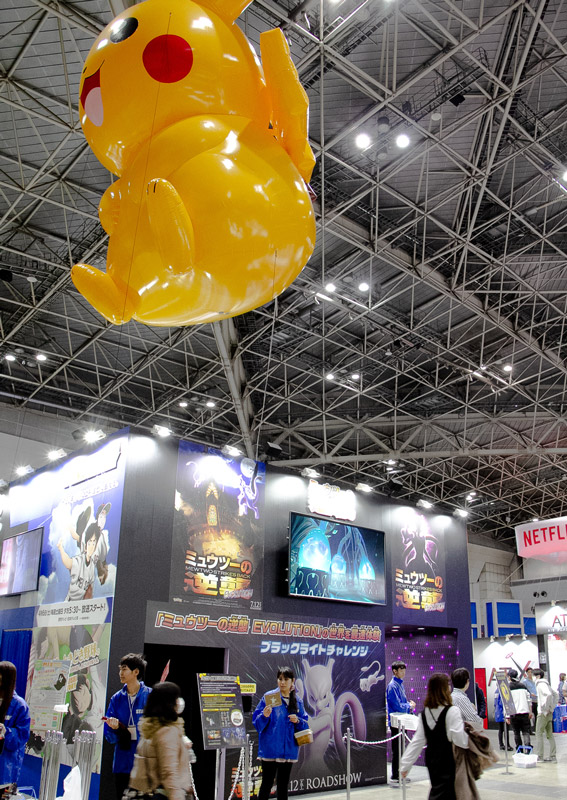 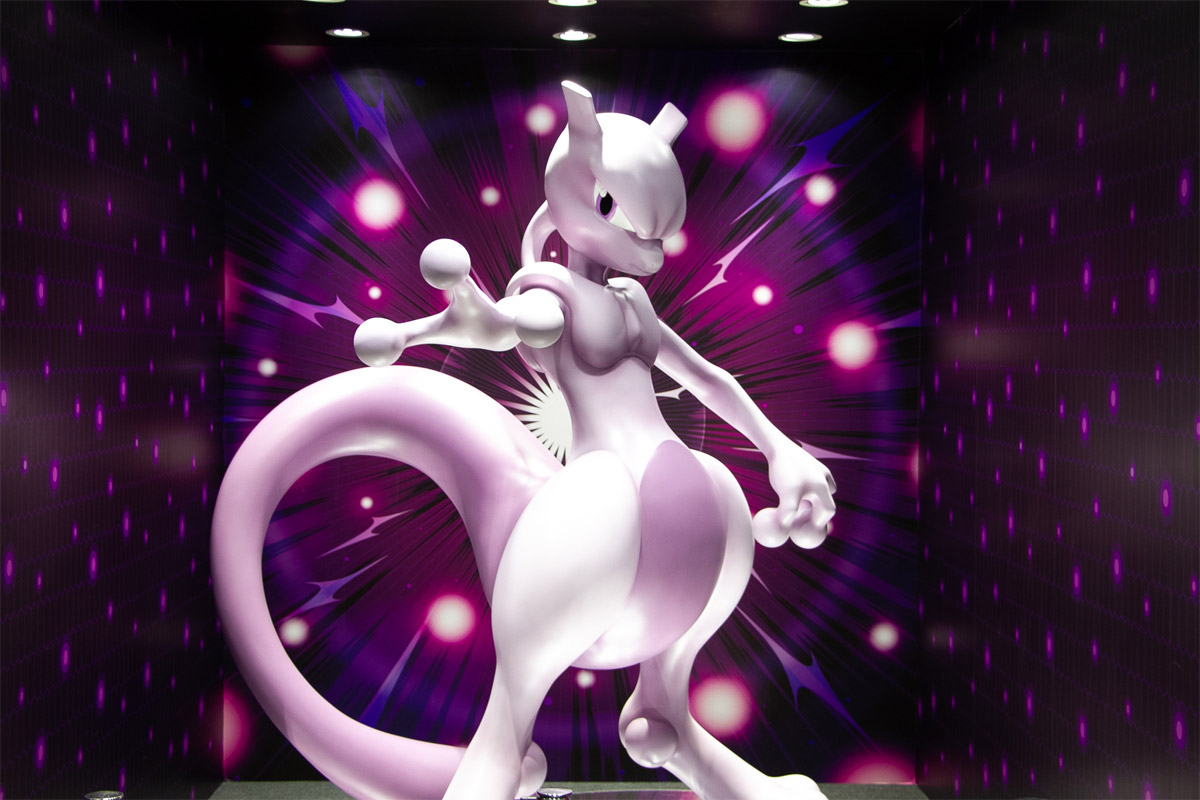 With an enormous screen at the entrance, half of the SQUARE ENIX booth was made so visitors could play a life-sized version of the RPG app Toaru Majutsu no Index Imaginary Fest, scheduled to be released for Android and iOS devices this year. It also had a shop area which sold and new merchandise from several titles including Black Butler, with some only available at AnimeJapan 2019. 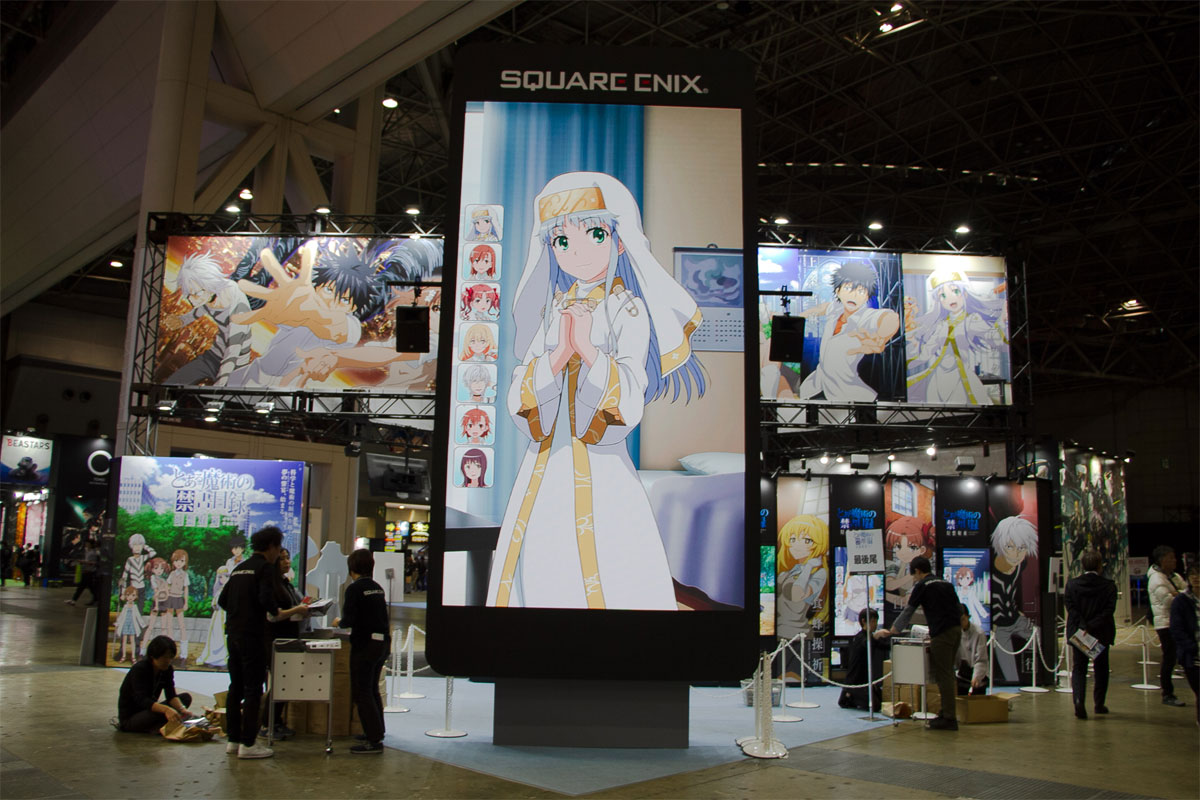 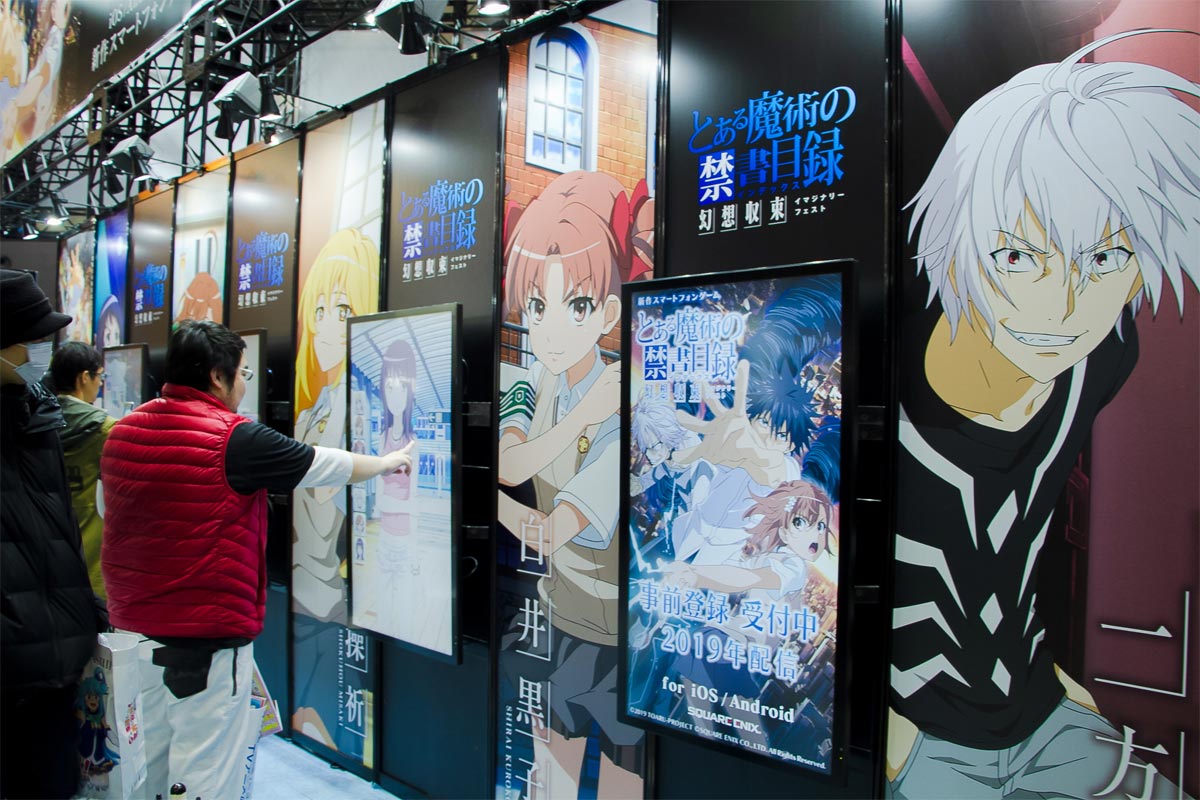 The BANDAI NAMCO Animation Airport booth was one of the most elaborate of all exhibitors, with the concept of “Airport.” Visitors are asked to first go to the ticket counter where the staff were dressed in orange uniforms (i.e. the color of BANDAI NAMCO Group) would welcome you and hand a “passport”. Then, there is a passport control, where staff would press a stamp on your passport before staring the tour. The first “boarding gate” features the history of the Gundam franchise, which has been one of the most popular and famous Sci-Fi robot Animation series in Japan for 40 years, followed by other gates introducing other major or upcoming titles including the Love Live! Franchise, a successful cross-media animation project and ANEMONE: Eureka Seven Hi-Evolution (2018), the second film in the trilogy Eureka Seven Hi-Evolution. The gates were categorized into 5 areas; Gundam area, TV area, Cinema area, Web area, and A-on STORE area, with passport control for each area.

The ufotable booth was mainly filled with merchandise of which the biggest feature was the big mosaic of Fate/stay night [Heaven’s Feel] and Kimetsu no Yaiba made up of button badges featuring the scenes from each title. 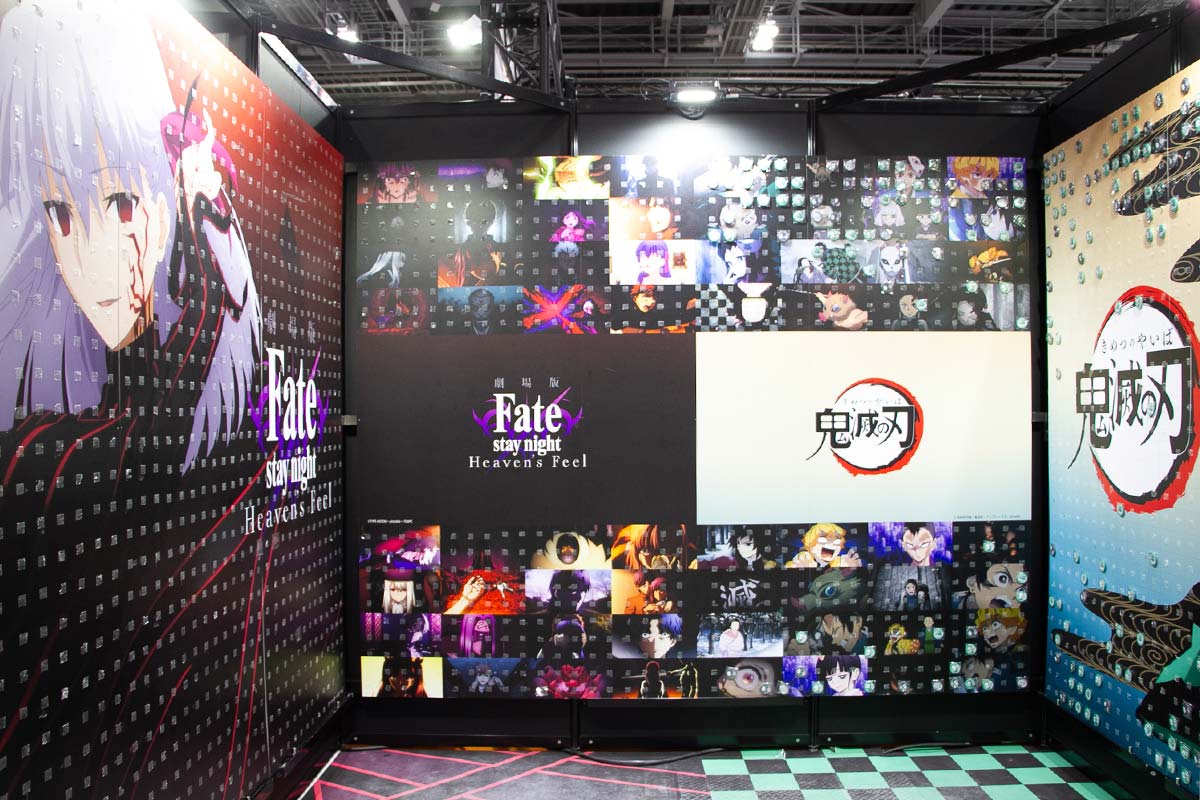 Walking into Warner Bros. Japan’s booth was like wondering into a town of chaos and excitement, and in fact made it like an actual town with street signs and crossings. On a large Jojo’s Bizarre Adventure poster, one of the character’s eyes follows you from any direction, and an AR game where you can instantly play via web was provided and visitors started shooting games right in middle of the booth. Big panels of the upcoming movies NINOKUNI and The Wonderland were set up along with other major titles including Mob Psycho 100. 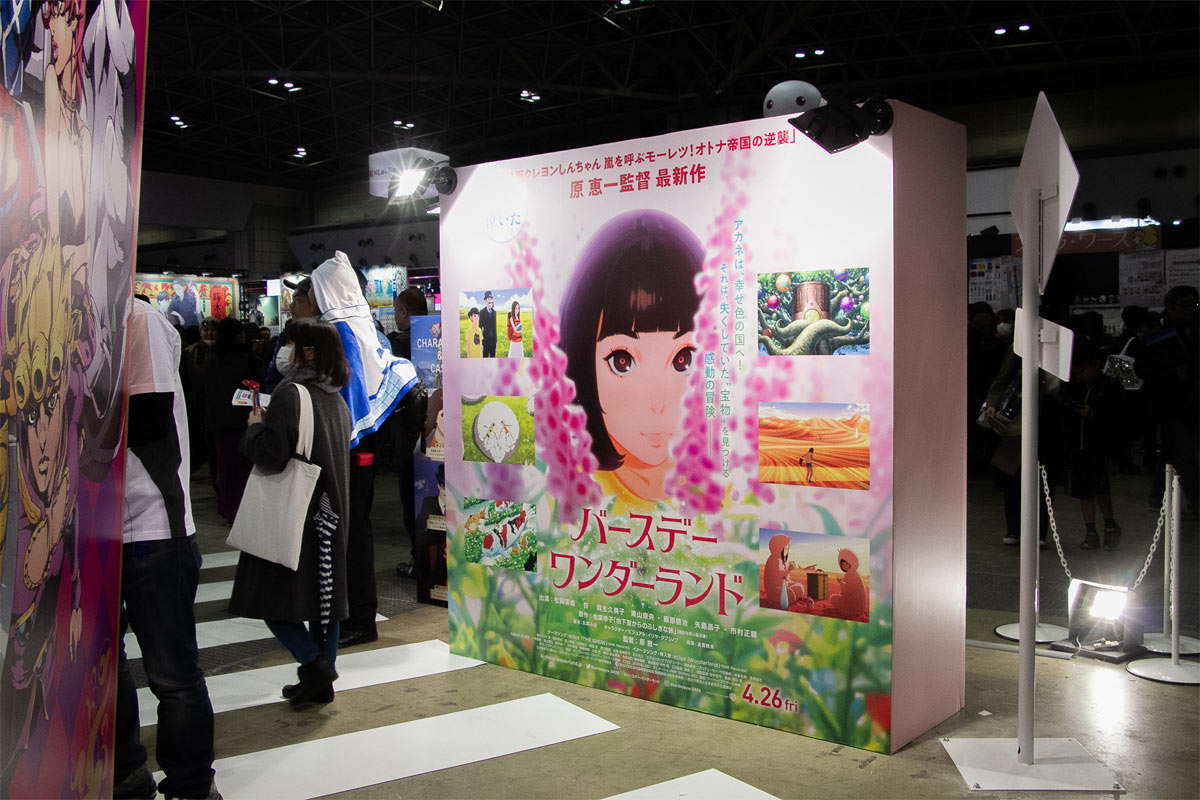 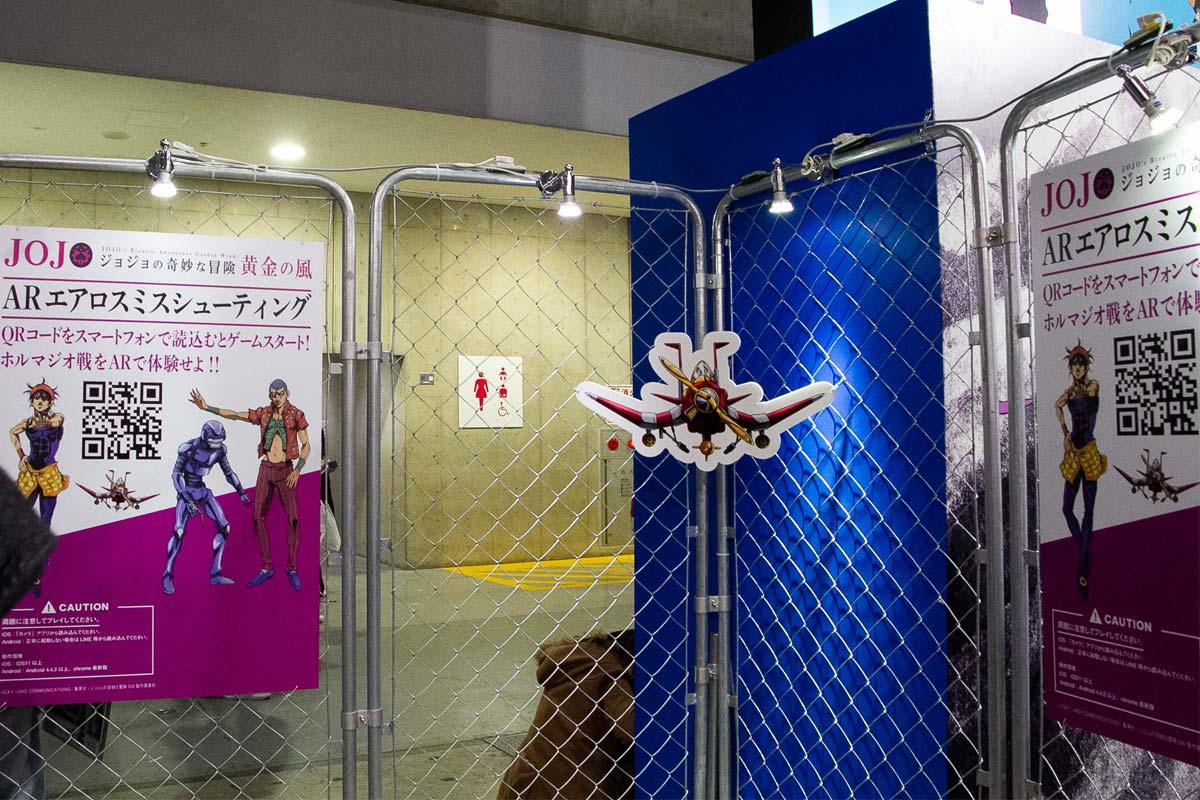 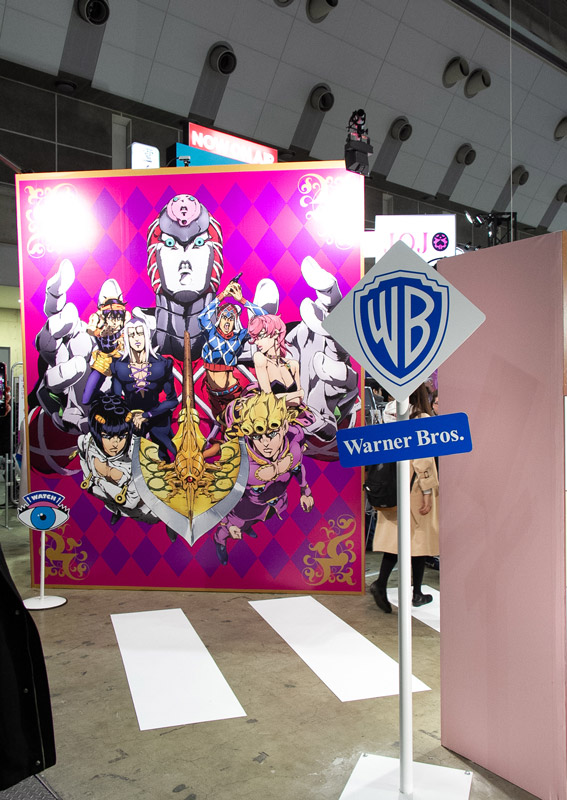 [Photos and texts by Aya Tanaka]