– Could you please let us know what your studio takes special care in through the production process of each animation project, such as the visual expression and structure of the story?

OTSUKA Masahiko: Basically, although we leave visual expressions or story structure in the directors’ hands, we have the common understanding as a studio that we do not want to create something that is not within the realm of entertainment, because enjoying moving drawings is what animation is about. Our works may present or contain social themes, but even in such cases I think the most important thing is that the works must be entertaining for the audience.

I also want to cherish the visual design direction that the Japanese animation industry has nurtured. Worldwide, the techniques used in creating animations are moving towards 3D CGI, however there are a lot of hand-drawn 2D animations still remaining in Japan. Thanks to the unprecedented look of animation the Japanese animation industry has developed, the stylization originating from manga, we can use techniques in character design where many details can be omitted, but at the same time many delicate expressions can be represented.

– Animation is an aggregation of the creativity of many creators. What qualities does your studio look for on the selection of each staff for a project team, production environment or the management of each project/production team?

OTSUKA Masahiko: For TRIGGER, the selection criteria for creators can be summarized as follows: the presence of motivation and track records that can convince the surrounding team. We don’t force creators to change their own artistic character or illustration styles they are good at. I think it is fine to have diverse works that vary depending on each creator.

I think the ability to create output is one of the talents a creator can have. Even if a creator seems to be talented, he or she cannot contribute to animation unless the talent can be demonstrated in the output. We can only judge his or her ability by looking at the actual works of that person. In that sense, this industry is a meritocracy.

Many of your works are not based on original novels or mangas. In KILL la KILL, the story is splendid and keeps on developing throughout the work, from beginning to end. Please tell us what you are careful and particular about when creating original stories.

OTSUKA Masahiko: We happen to create many ‘grand’ stories. Fans often say that TRIGGER’s titles eventually go into outer space in the end (laugh), but it is not our initial aim. The larger the universe of the work, the flashier it gets as an entertainment, so I think our stories tend to blow up automatically during the production process.

I personally think that if the characters are appealing enough, the work can be entertaining even with a minimalistic story, so I do not think we necessarily need to make grand stories. I personally predict that TRIGGER’s works will diversify as the number of directors increase, such as with AMEMIYA Akira, a young director who can create more sensitive stories.

Please tell us about key creators who have supported the studio’s works.

OTSUKA Masahiko: So far, we have created our titles mainly with the members who worked for the GURREN LAGANN project, including directors YOSHINARI Yoh and IMAISHI Hiroyuki, screenwriter NAKASHIMA Kazuki, and animator SUSHiO. We just recently begun searching for new creators.

AMEMIYA Akira will be part of the next generation of TRIGGER after them, and in addition, we have a line producer, TSUTSUMI Naoko, who manages on-site and keeps the production running smoothly. Because of her, we can take on brutally challenging titles.

In addition, WAKABAYASHI Hiromi is the kind of talent that cannot be found in ordinary studios. While his title changes with each work, he became an advisor of directors, who tend to be lonely, and emotionally supports them with his straightforward way of speaking.

Last year, your feature film PROMARE was well-received in oversea markets, including in North America. Could you please let us know how your studio, who came out with TV series hit-after-hit, took on the challenge of creating a feature film with an original story?

OTSUKA Masahiko: I’ve actually been wanting to create a feature film since the establishment of TRIGGER, partly because I started working in the animation industry at Studio Ghibli. KILL la KILL, the first original series by creator pair Mr. Imanishi and Mr. Nakashima, became a very challenging and hard project and the two creators felt like they did everything they could do with the series. So, I thought the next work from the pair would be a feature film.

Thankfully, PROMARE was well received by fans, but behind the scenes there were some areas that were confusing in production due to our lack of experience, as it was the first feature-length film for the studio. So, I think the studio can further grow if we can improve the areas that did not go well during the making of PROMARE, not letting the difficult experiences be in vain. 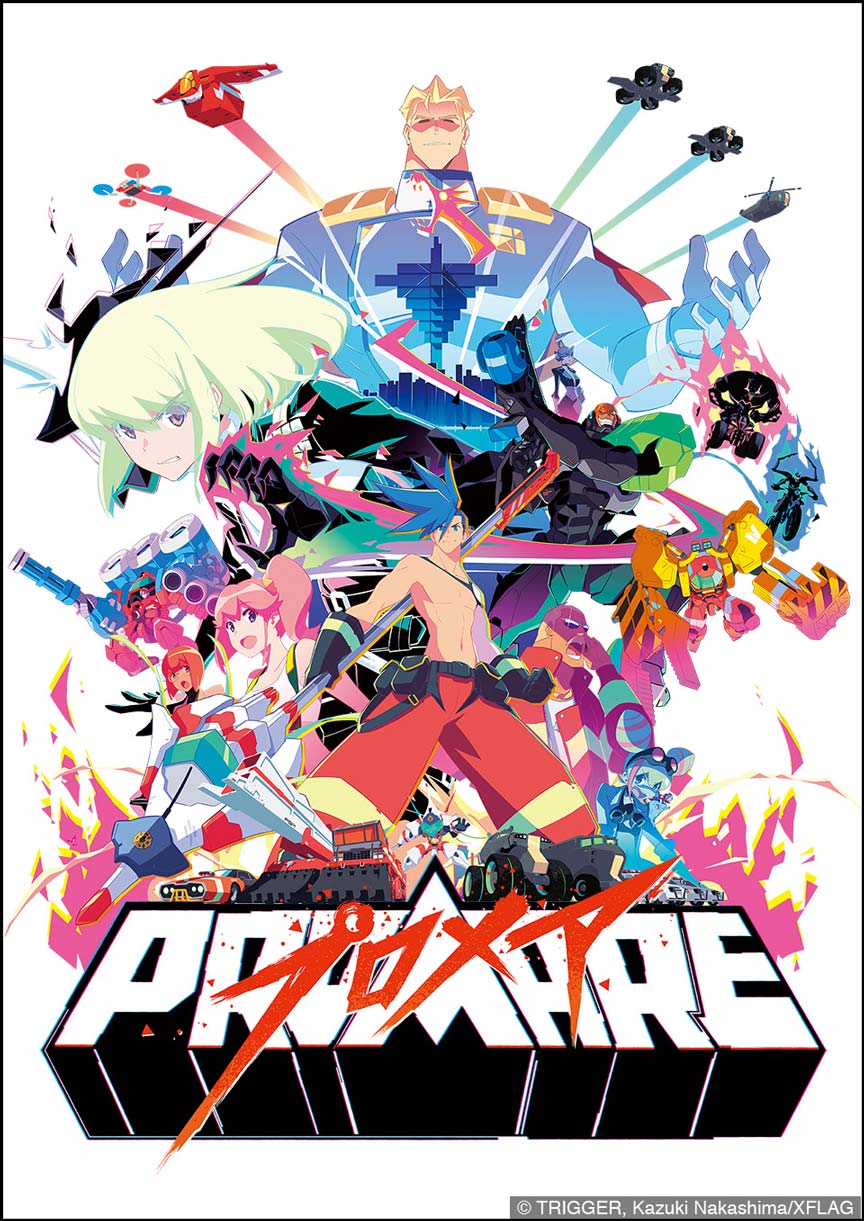 Please tell us about the parts you struggled with or you thought didn’t work well.

OTSUKA Masahiko: When we create TV series, we produce each 30-minute episode in order and submit sequentially, keeping up with the broadcasting schedule. For feature films, we divide the whole animation into multiple parts and proceed in separate productions. In the case of PROMARE, all the parts are completed at the same time, as if all the episodes were submitted at once if we compare the situation to the production of a TV series.

Just before the deadline of the project, many of the staff noticed the difficulties in what they have to get through in creating a feature film. Thus, for the next opportunity, we hope we can keep in mind that we need to keep the production ahead of schedule so we can avoid what we experienced at the later stages. Before the natural replacement of the staff, we want to make the best use of the experience and would love to create another feature film.

OTSUKA Masahiko: We are very interested in it and we have a strong notion to increase the number of fans worldwide by appearing in many overseas events every year. In terms of TRIGGER’s sales in Japan, our works are niche and not part of the mainstream market, however I think we will have enough fans to be sustainable as a business if we can surely reach out to the fans in the world who like what TRIGGER makes, even if it is a little niche.

Actually, we temporarily were in an ambience to take the mainstream market into consideration in the early production period of PROMARE, but we immediately came to the conclusion that it was part of our identity to not think that way. We thought our work would end up being toned-down if we start thinking, “if we do this it will sell well”, and focusing on an audience larger than what we can see and can come to our own events. I think what our audiences look for are works that all of us, with the directors at the center, find truly interesting and have fun working on, even if the works seem niche. So, the future theme of our business will be to continue creating such works and discover more and more fans who enjoy our works together.

“Animation is not only for children”

Please tell us about your vision and future outlook of the studio both in Japan and overseas, and also your ideal personnel and any challenges you may face.

OTSUKA Masahiko: When we look at the global markets, I think many adults still strongly think that animation is for families or children. As animation gained a place in society a bit sooner in Japan than in other countries, I think it is one of our roles to spread this idea worldwide. For example, when the people who watched KILL la KILL in their teens become adults, I think the view of animation as being not only for children would be accepted more broadly.

Through interactions with fans of TRIGGER, I feel that Japanese fans and overseas fans are the same, and people can be connected through animation. To exaggerate a bit, I think this is also beneficial for world peace. So, I want to reach the stage where various generations of people from all over the world become aware of Japanese animation over a long period of time.

Regarding talents, I think we will need overseas talents when bringing our works to the world, and our staff already have been influenced by various works regardless of domestic and foreign countries. Therefore, from now on I would like to increase opportunities in creating work with people overseas. However, we are still unable to easily invite talents overseas due to language barriers or financial burdens. If TRIGGER’s work starts selling more in the global markets, I think that it will lead to acquisition of new staff from all over the world.