The Projects to Take Part In

You have participated in various projects, which were highly regarded domestically and internationally. How did you decide which projects to take part in?

We don’t select projects which we take part in from us. Basically, we take part in the projects if the schedule allows when we receive some offers. Even when our schedule is full, we would say “we cannot take any projects during this time, but this time would be fine” and then the schedule could be adjusted and we can participate. If the scheduling does not go well, sometimes we have times when we don’t have any works.

How do new projects start and receive offers in the Japanese animation industry?

Some people may think that creators or studios would raise hands to projects that they would like to take part in at the stage of ideation. But that kind of case is very rare.

Because, by the time the general public know about a project, the project team is already formed. In most cases, at the stage where the project team starts contacting a background art studio that they wish to work with, we, Bamboo studio, learn about the project and accommodate ourselves whether we can accept that project or not.

How does a project team get in touch with you? For example, would it happen in casual talk such as when you have small talk with a director at a pub, and casually brings up: “actually we have this kind of project”? Or, does the project team contact your studio by an official business email?

We have both cases. It’s case by case. In case of when a director or producer appoints us directly, as you have just said, while drinking together at a pub, we have a conversation like, “We are going to have this kind of project next year. What do you think?” and we answer, “It sounds fun!”, then our participation could be decided.

One day, while I was reading some magazine at a convenient store nearby my home, Director Kamiyama came in and asked me “Are you available, after the title you are currently working on, Mr. Takeda?”, then I answered, “Nothing is scheduled after that at the moment” and he continued, “We have this kind of project”. So I said, “Please let me know the details!” Next week, I received a call from a producer and we could take part in the project.

I assumed that there were several candidates of background art studios, surely, but having a talk with the director at the convenient store by the pond in Shakujii park at midnight coincidentally led us to our participation in SAC.

Yes. It is not that every project is decided at the official places. There are cases that our participations in the projects are decided like while we are having some food with someone who are introduced by another person, then we talk like, “Well then, let’s do something together next year”.

Lately, some of the works that Bamboo studio participated in were international projects such as the TV series Dimension W (2015), which Funimation, based in North America, took part in and created the promotional video for Genreidowa from China. How did you become involved in those kinds of international projects?

Neither of them I approached proactively. It happened to be that oversea companies participated. Production of Dimension W is all done in Japan and I learned that Funimation would stream it in North America later on. In terms of Genreidowa, the funder and a person who is like a general director are in China, but the animation is produced mostly by Japanese staff. Its production process was like, a Chinese person who has been working in Japan for a long time played a role of a production producer and a contact point to gather resources in Japan. And completed all the visuals were brought back to China from Japan for the client’s check.

Do you think that the number of international project is increasing?

I think it is increasing. We produced PV for another client, which was produced by a Japanese production company, but has an overseas company as one the project members in the same way. 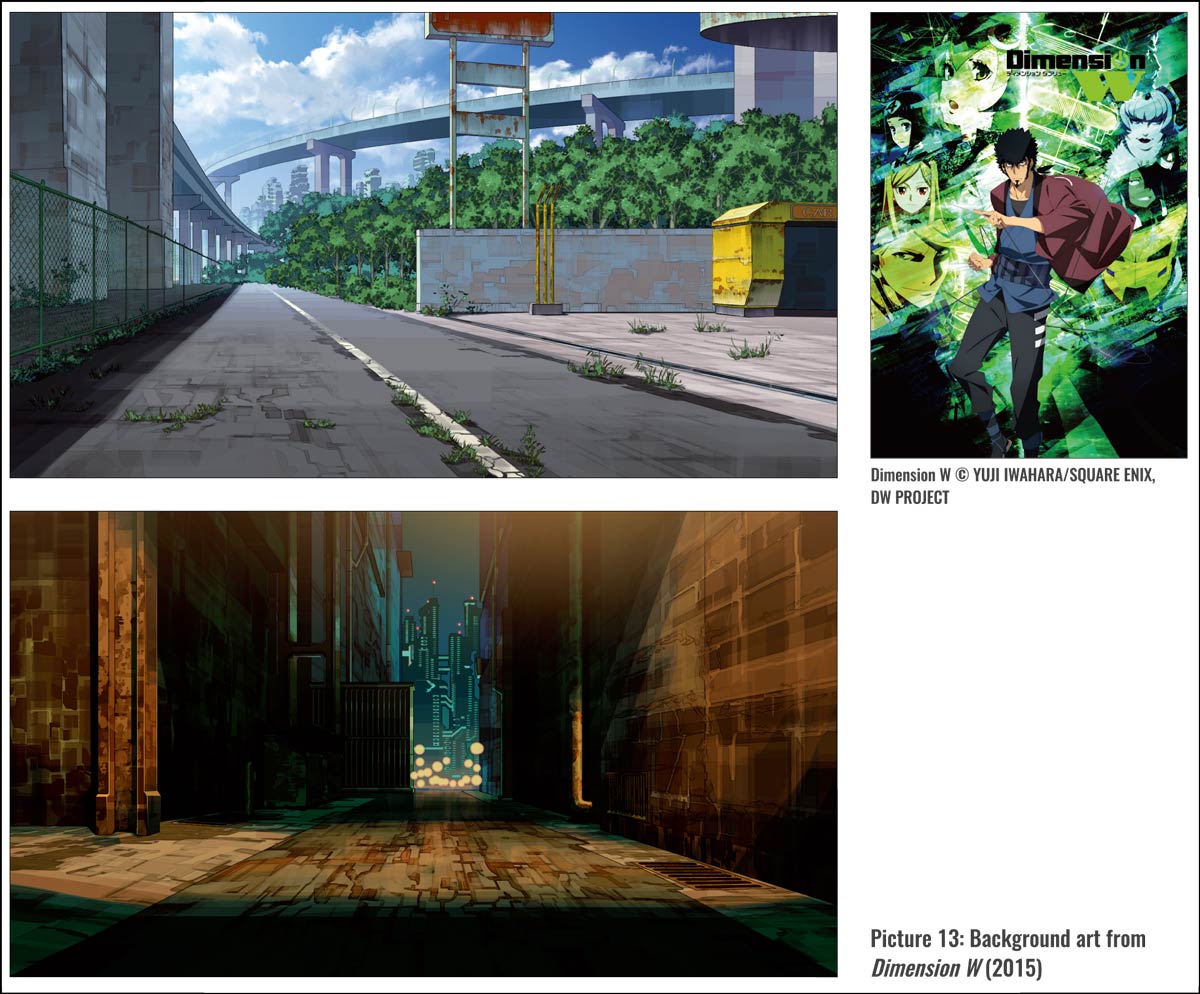 Future Vision of the Studio

Regarding the future vision of the studio, my answer is rather vague but it is important for us to show what kind of drawings we can draw to respond to what producers and directors of the day want to create. So, I would like to keep focusing on that.

Would you have any advice to who would like to work for the animation industry in the future?

I think that the most common reason why people, who work in the animation industry, want to work for animation is that they like watching animation, presumably.

However, the work of animation background art is not necessarily a job for those who like animation.

For example, it is not rare that a student who learns drawing at an art university may find that there is a job for animation background art for the first time when they search for a job in drawing, although they may not like animation much.

As you know, there are not so many career choices that your acquired skill at art university can be used in, actually.

For instance, if you could get a position as a designer at a game company, it is attractive financially, but the opportunity is limited. Opportunities to get positions such as in advertising and interior design are not so many, either. So there are not much jobs that you can use your skill of drawing, which would lead to income. In a sense that drawing can be your work, quite a number of graduates of art universities select animation background art as work.

As you have been working for animation background art for a long time, where do you feel satisfaction, achievement and enjoyment in your job?

To be honest with you, during the time, when we are drawing background art, is just laboring for us. We draw as a job and have to complete drawings by the deadlines so that it is a dilemma to our own desire to draw one piece as much as we want. Having said that, I can say I am happy at the moment when I finished drawing.

When I feel achievement most is a time when my finished background art is completed as a scene of animation and I can feel that my aimed psychological description is expressed well.

As we drew paintings with an aim to complete the final visuals of animation as background art, not completing drawings as a hobby, I get goosebumps if, in one scene, when the sound of footsteps that a protagonist walk on the cold alley matches to the sound that I imagine from my drawn stone pavement. I am pleased if a sound, darkness of alley, humidity and so on that I imagined during drawing match the lighting, color of characters, effect sound and direction etc. of the final visuals perfectly.

For example, there is a scene that a sound of footsteps changes from walking on a road where snow is cleared to stepping into fresh new snow. That is how a sound director differentiates sounds by looking at finished visuals. For me, the process where many different people complement different parts one after another to complete visuals of animation after our drawings of background art is fun.

I forgot to mention a very important thing. I think it can be said that background art is the section of animation production in which your drawings most directly contributes to the film. The impressive feeling, which you have when your drawings appear on screen, stays the same.

Also, responses from viewers motivate us more than ever thanks to internet streaming services and social media. We never imagined the time when we can see the reaction of viewers saying like “That background art is good” on the night when that episode broadcasted would come.

Do many people in the animation industry check comments written by viewers on Social Media such as Twitter?

Yes, there are quite number of people who check that. There is a person who really worry about it and another director does not want to see any of them at all by saying things like “I want to go to the world where no internet exists after releasing a film” (laughs). It can’t be helped to look at reputations by viewers in this internet age.