The Creation of a Fantasy Universe

You depicted the fantasy world in the feature film Berserk: The Golden Age Arc III and the TV animation series Sword Art Online, which has many fans in the USA and Europe. How did you create them?

As Berserk sets in a fictional Anglo-French war between 13th and 15th Centuries, we organized a trip for a viewing location to research topics such as how siege warfare of a castle was waged and structures of a castle for the protection in that time. Then we drew background art that would reflect them as much as possible. In that sense, a trip for a viewing location is a prerequisite for this work. 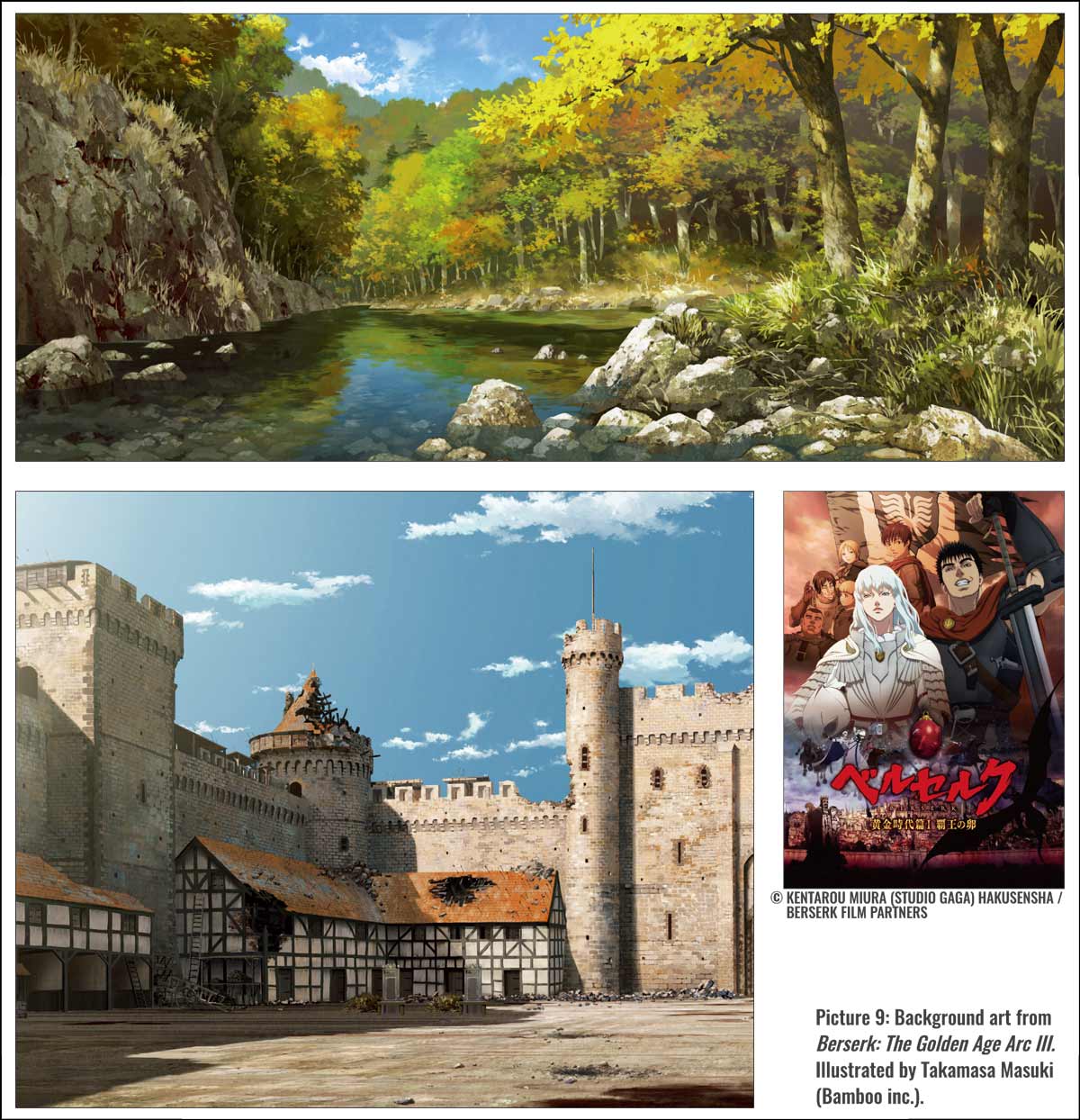 On the other hand, Sword Art Online sets in a stage inside of a fantasy video game. I think that every motif for this world can be found in the universe of European fantasy works, which we used to read when we were small, like classics The Never Ending Story and The Lord of the Rings. 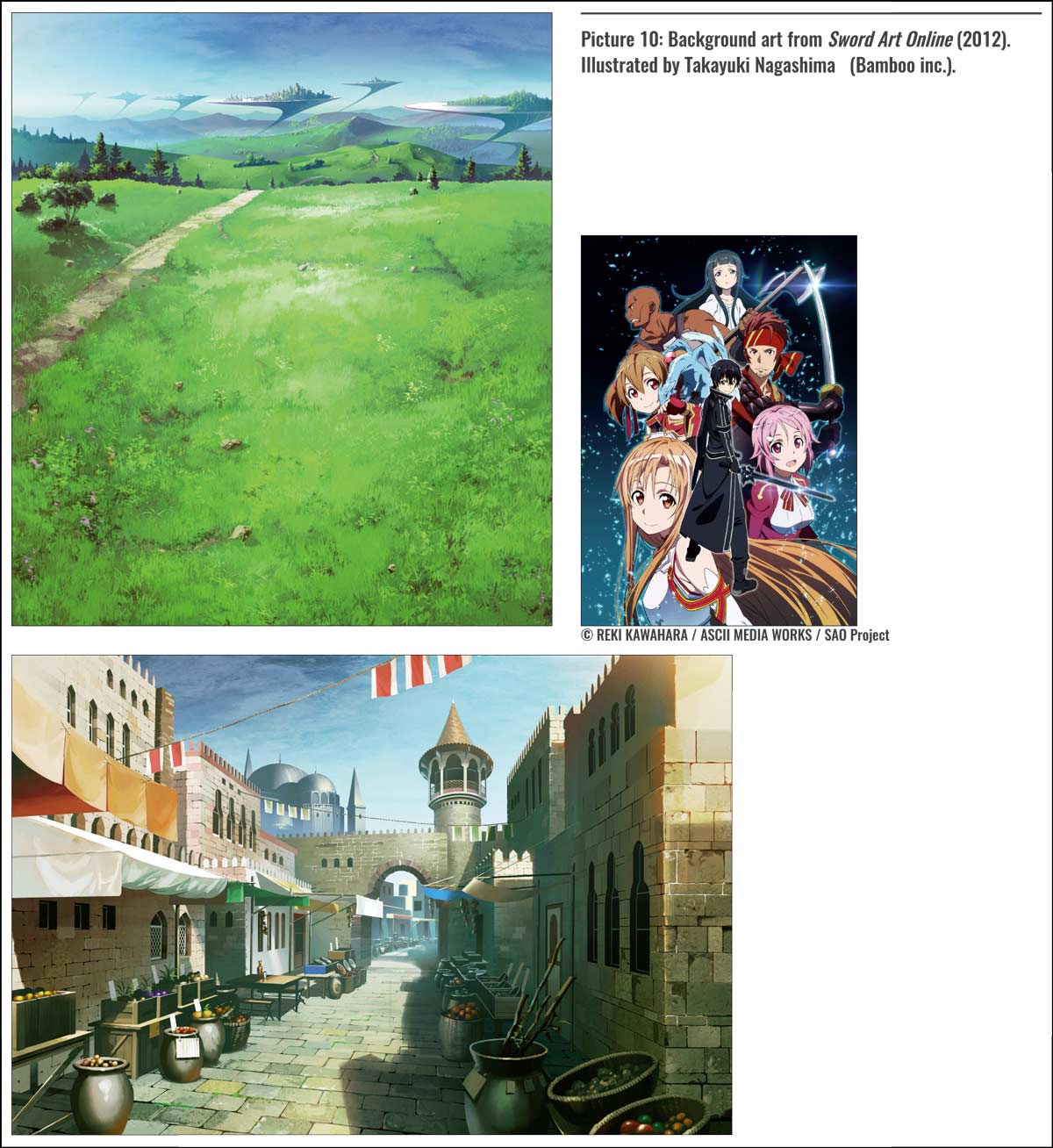 So it is impossible to organize a trip to view locations for Sword Art Online. Yet, we would like to have reality in the world of fantasy, which does not exist for real. To do that, we drew by reflecting our knowledge and information from our daily lives. We also tried to draw items designed, which do not exist in the real world, to reflect changes in light and color naturally. Moribito: Guardian of the Spirit is also a story in a fantasy world, but the scenery and atmosphere of the universe is totally different, because we tried to draw an Asian fantasy world. 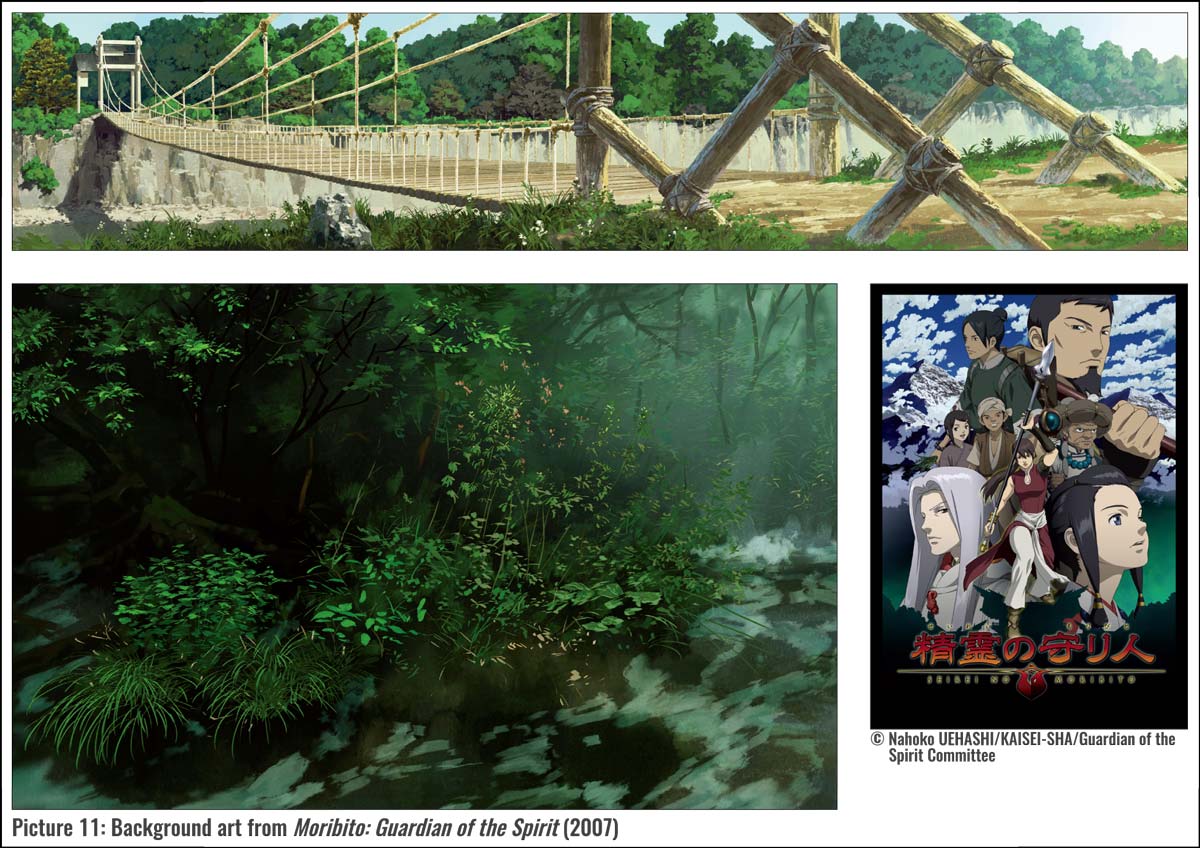 Were the visuals for the universe of Sword Art Online decided during the layout stage? Or was it created at the stage when Bamboo Studio draws background art?

In a case of the project for Sword Art Online, first of all, concept art were drawn by Sotaro Hori, who usually works on video game projects. Besides that, Yorinori Shiozawa, a freelance art designer, designs the universe and then most of the designs are decided. Then, at the step where we drew an art board, Takayuki Nagashima from our studio takes part in the project and the drawings start taking shape.

Regarding layouts, it is almost impossible to manage all scenes to follow the same designs of the universe, because so many animators get involved in the TV series and the production schedule is very tight, as I previously mentioned.

For one TV animation series, 20-30 animators got involved, so 20-30 different kinds and styles of layouts were produced. Among various layouts, there are layouts boards that make us want to follow it, although it is different from the baseline designs of the universe or storyboards, and layouts that we need to correct. We, art directors, control the design of all these different layouts as a whole.

Sometimes, I adapt our drawings closer to a unique layout design, re-draw it, or tell those visuals to background art staff to share the new designs. We complete our drawings by doing those kinds of arrangements flexibly in real time on-site. There is a position called animation director who controls the design and quality of layouts at a certain level, but at the end, the art director ensures consistency of visuals one last time.

Bamboo studio basically draws 2D background art, however, 009 Re: Cyborg (2012) is a stereoscopic animation. How did you produce the background art with 2D drawings?

As you say, we draw background art in 2D, but we made it to visuals that can be stereoscopic at the compositing stage. In other words, we made the visuals with the perception of depth that can be recognized when you watch them with 3D glasses.

To be used in stereoscopic visuals, we draw objects in more separate parts on different layers, based on the perspective and distance from the audience’s eye, when we draw 2D background art.

We used to call visuals that were filmed by two cameras, “L channel” and “R channel”. Because of disparity, for example, it could be that one object cannot be seen in L channel because it is hidden by another object in the view of L channel, but it can be seen in R channel in the same scene.

In other words, we need to draw objects that would normally be hidden by another object in a conventional 2D animation filmed by one camera. So, we drew many more objects than usual for each scene. As I don’t know the technical details of filming and composition, this is only in theory.

So, you drew objects in each scene, which were hidden by some objects from a certain view, on each different layer by separating the structure of one background art into a number of parts. 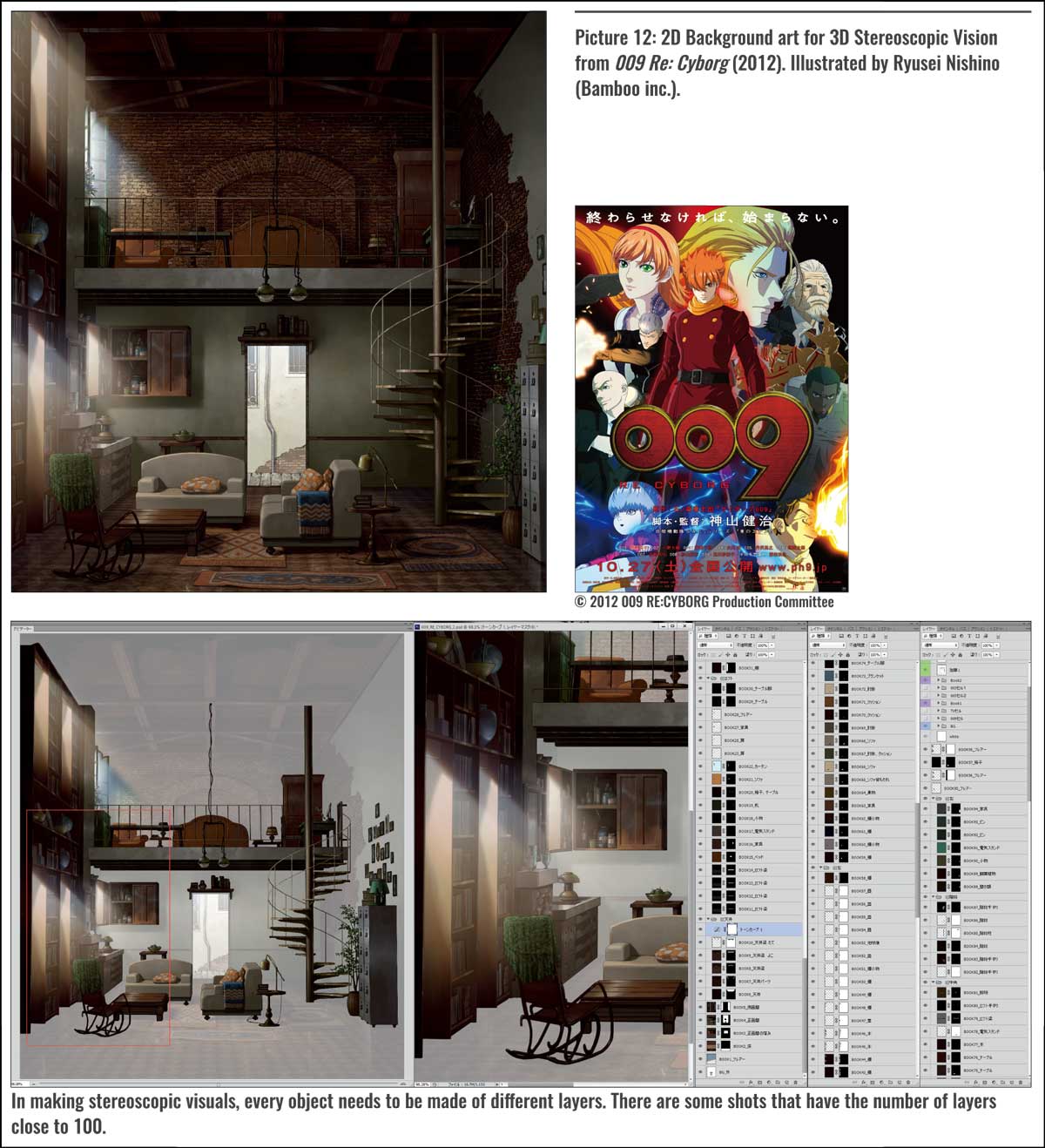