Do you draw the background art digitally for every project that you take part in and are the character animation (layouts, key frames and in-betweens) for the projects drawn on paper?

Animation is often still drawn on paper in Japan. In-betweens drawn on paper are scanned and made into digital cels, then it is common to superimpose with digitally drawn background art via After Effects. Before then, there were several software to support animation production. I think that the first software is a British one called “Animo” (a software by Cambridge Animation Systems). In the beginning, when After Effects was introduced, we used After Effects only for special cuts and use simple compositing tools for all other cuts. But I think almost everything is done by After Effects nowadays.

What kind of difficulties and challenges did your studio have through the transition from analog production to digital production?

In the early days when we introduced digital production, it was difficult to recreate natural objects. So we used to keep the ratio of analog drawing and digital drawing to be something like 6:4.

For example, one of the difficult expressions to be drawn in digital is subtle blurring, which we used to express by using a brush technique and paint bleed in analog, for drawing things such as clouds, to allow them to have softness and emotion.

It was difficult to replicate this analog blurring effect by adjusting the settings of brushes with Photoshop at that time.

When we participated in the TV animation series Moribito: Guardian of the Spirit, we noticed that we can make a similar expression by the combination of some tools of the latest version of Photoshop and Corel Painter at that time. So, we said, “Let’s try the whole project this way”, and this became the opportunity to move completely to digital production. This means that overcoming the difficulty of drawing natural objects as intended was the biggest obstacle in moving to digital production 100%.

On the other hand, we could draw solid things well and emotionally with Photoshop from the beginning of our challenge in drawing digitally. It actually requires a lot of skill to draw gradation evenly with poster color and brush on paper. So, for objects, which have a smooth surface, it is easier to draw with Photoshop than paper.

The background art of Eden of the East (2009) gave me a strong impression and a new feeling, which is different from analog drawing, because they had the sharpness thanks to digital drawing and were integrated with a texture using a wide brush and well-balanced noise. How did you establish that unique style of drawing with what kind of intention and process?

I talked with the director Kenji Kamiyama when Eden of the East came up, “What kind of drawings shall we have next?” as we had a so-called realistic style of drawing for the TV animation series Ghost in the Shell: Stand Alone Complex and Moribito: Guardian of the Spirit.

It was decided that Chika Umino, a comic artist, would be the character designer of Eden of the East. We wondered, “What kind of drawings would match the characters drawn by her?” Everyone could come up with a so-called “watercolor style” background art, which is used for animations based on girls’ comics in the Japanese animation industry. So we talked to try the totally opposite direction.

There is an illustrator whose name is Eizin Suzuki who are known by everyone in our generation in Japan. Around the time when I was a student in Junior High School, he was drawing a cover image every week for an information magazine about FM radio programs titled “FM STATION”. I personally liked those illustrations very much.

His work has very bright colors, but surprisingly realistic. He quite often drew sceneries of California in his works. He is the person who has drawn the American landscapes that we liked when we were students. And the opening scene of Eden of the East was in Washington. Then, I suggested Director Kamiyama about my idea, “How about visuals like Eizin’s illustrations?”

It could be the opposite of the watercolor style if we draw backgrounds by using an Eizin-style color tone. We couldn’t use it as background animation art for practical purposes and needed to arrange it to make it fit with the animation. But we have know-how from the American-comic style illustration used for 009-1, so we decided to give it a try with that concept.

Another reason is that there were a lot of TV animation series at the time so that we wanted to have the look of illustrations that stay in the audience’s mind to instantly understand “Oh, this is from Eden of the East!” when they changed channels on TV.

With those in my mind, the artistic style of Eden of the East came to be.

Actually, I had once tried to draw Eizin-style illustrations when I was still drawing background art with paper and paints in my 20s. It took a lot of effort to paint evenly and beautifully as well as creating outlines thinly and smoothly in black with a brush to make them looks like Eizin’s style. Then, when we were discussing about the visuals of Eden of the East, I thought that this way of expression works better with digital drawing and now is the time to realize it. So, it was the first work that can be benefited most from digital drawing, not paints. 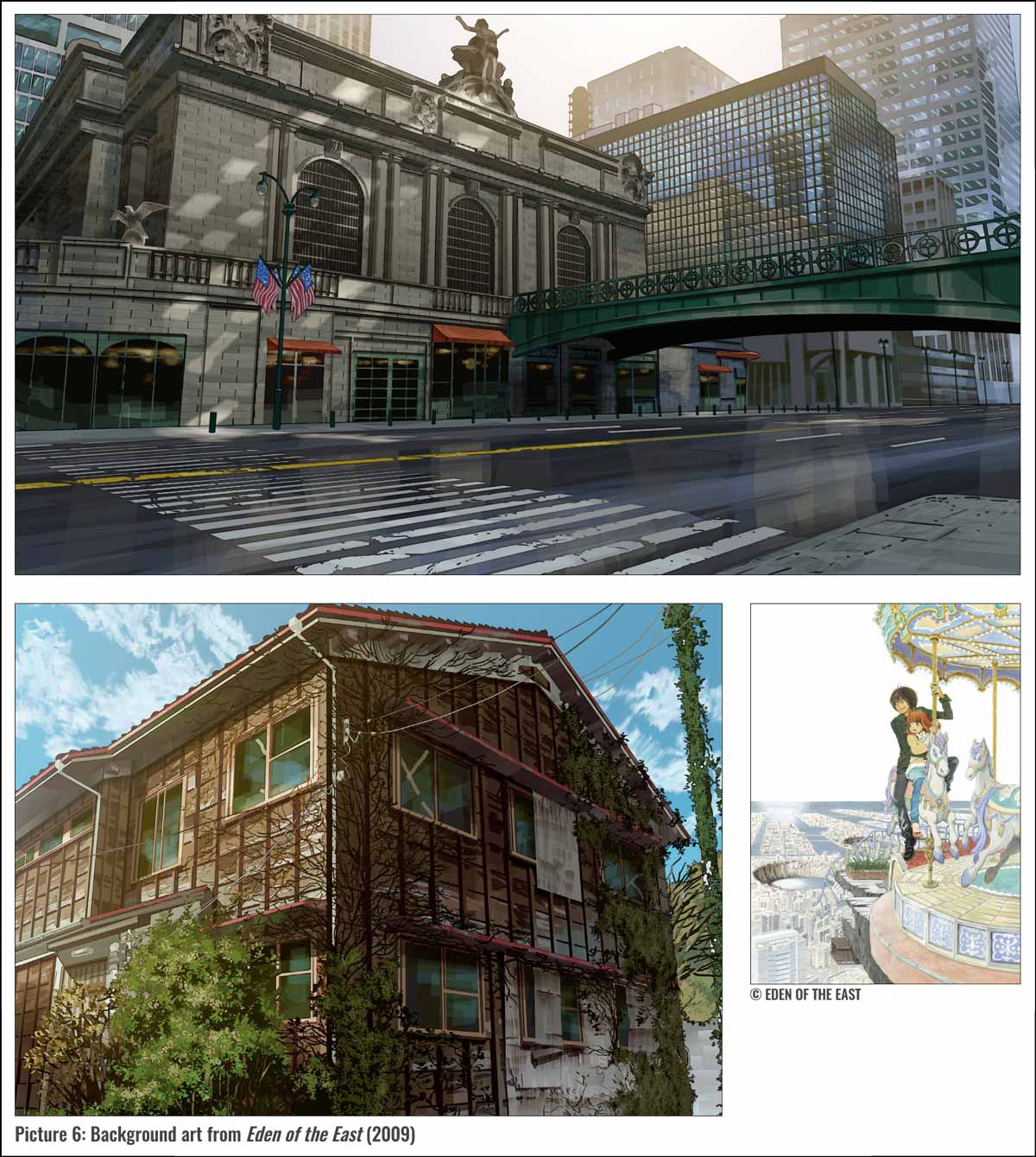 Could you let me know the characteristics of background art in Japanese animation and how it established?

I think one of the characteristics is the graphical realism that is different from live-action. If we look at this from the global perspective, animation can possibly be categorized into either animation for family and children, or very artistic animation. But I think Japanese animation did not fall into either category and developed in its own way.

What I am going to talk about is what I personally feel from seeing many works for a long time rather than something I studied. In the early age of Japanese animation, background art was drawn with a so-called watercolor technique. At a certain time, it was probably creators who introduced a way to create scenes and layouts from the perspective through a camera lens, which is used in live action films. This means that Japanese animation started to become more conscious about the ideas of lens, angle of view, and exposure when they create the visuals. In my personal view, since then, the visuals in Japanese animation started to have its own unique reality.

What I mean is that Japanese animation creators started to consciously layout each scenes as in, for example, this cut will be shot with a wider lens and the next cut will telephotographed. Of course, they then started caring about exposure as a next step. Although the background art of animation were painted with local color, which was called “normal” in the Japanese animation industry until that point, they started expressing the change in light and darkness depending on the environment, unlike painting everything with local color. In summary, it is essentially the concept of exposure in shooting with a camera.

I am personally thinking that the proactive challenge in making new visual expressions have been contributing to the shape of the realistic visuals of Japanese animation. Having said that, it has been 30 years since such visuals were made, so I suppose these techniques are taken for granted for a certain generation as this kind of technique is used in game and movies, not only animations.

The first time that I saw a telephotographed shot is the first scene of The Castle of Cagliostro (1979).

I see. So drawing layouts being conscious with camera lens started with animation movies and then introduced into TV series. Does this mean that this became the common feature in Japanese animation works?