Chayé and Han started working on a new project titled Calamity, A Childhood of Martha Jane Cannary. Chayé explains, “It’s a story about a girl that will grow up to be Calamity Jane. Calamity Jane is a very famous American character. She was dressed with men’s clothing, and went to saloons to drink with men, where it was forbidden for all women. She was a real cowboy, knew how to ride horses, and how to herd cattle. It’s very famous in France and in the USA. We’re going to do the childhood of her, when she was in a wagon trail. It’s with wheels and horses, and you have several wagons one after the other going to Oregon, to the west. She’s a pioneer. The idea is to show how she invents her own character. Based on that, she was just a normal girl like the others, but suddenly her father is injured. She had to ride and she had to take care of her siblings, that’s the idea. It’s a very nice story and character. We are actually writing the story now with the same scriptwriter from the Long Way North focus team Fabrice de Costil.”

Chayé develops the story further in a way described by the French term “dispositif” that is used by French philosopher Michel Foucault. “It’s nearly like a machinery for a scenery or device. It means that we need Martha Jane to be ashamed. It is not by just creating one or two sequences, but to build a system that will make her ashamed.”

Chayé also gets together with others to talk about devices, targets and objectives. “Like we need her to be in that state at that moment and we need to build something. I know that when I talk with Liane-Cho, he will have plenty of different ideas and invent plenty of different things to push. It’s all for Martha Jane Canary, we want to talk about her story in a way that she does. She is a girl, but would put on trousers and act like a boy. She would not be accepted for that. We want to question that problem, why a girl with trousers, why was she not accepted? Was she a girl, was she a boy? Why people are reacting so strongly to that? That’s the reason why we have some state to go through with her. We have to invent some situation, where it’s funny and when it’s sad. At one point she will cut her hair, because if she goes for a fight with a young boy, the boy can just grab her by the hair and pull her into the mud and win the fight. She goes back to her wagon to cut her hair very quickly, then she goes back to the fight and wins it. After that device, at one point we have an idea, and suddenly we can write dialogues and situations just appear quickly. After that we just throw it away. So it’s building, rebuilding, collapsing, rebuilding, collapsing, rebuilding, something like that.”

Regarding the team and structure for the project, Chayé and Han are clear that they want to keep the same structure as much as possible. “We are not rebuilding every time on a different pipeline and different graphic style. We’d like to build something with the same team. The idea is to make this movie with the same team and the same sort of conditions that Long Way North had, to be able to hire the same people as much as possible”, says Chayé.

Their plan is to use Flash, but improve and learn from their experience. Han says, “We try to correct all the mistakes from the past and make it better, but actually use the same base. It’s the story that makes all the movies so different. I think that’s the project we tried to do. We are very happy that we can start the project. At the beginning, Rémi wanted to be a nurse and stop animation after the movie. I hope it’s going to be a great adventure. We just hope that it won’t take 10 years to make it!” They also hope that their international success with Long Way North helps them with financing. 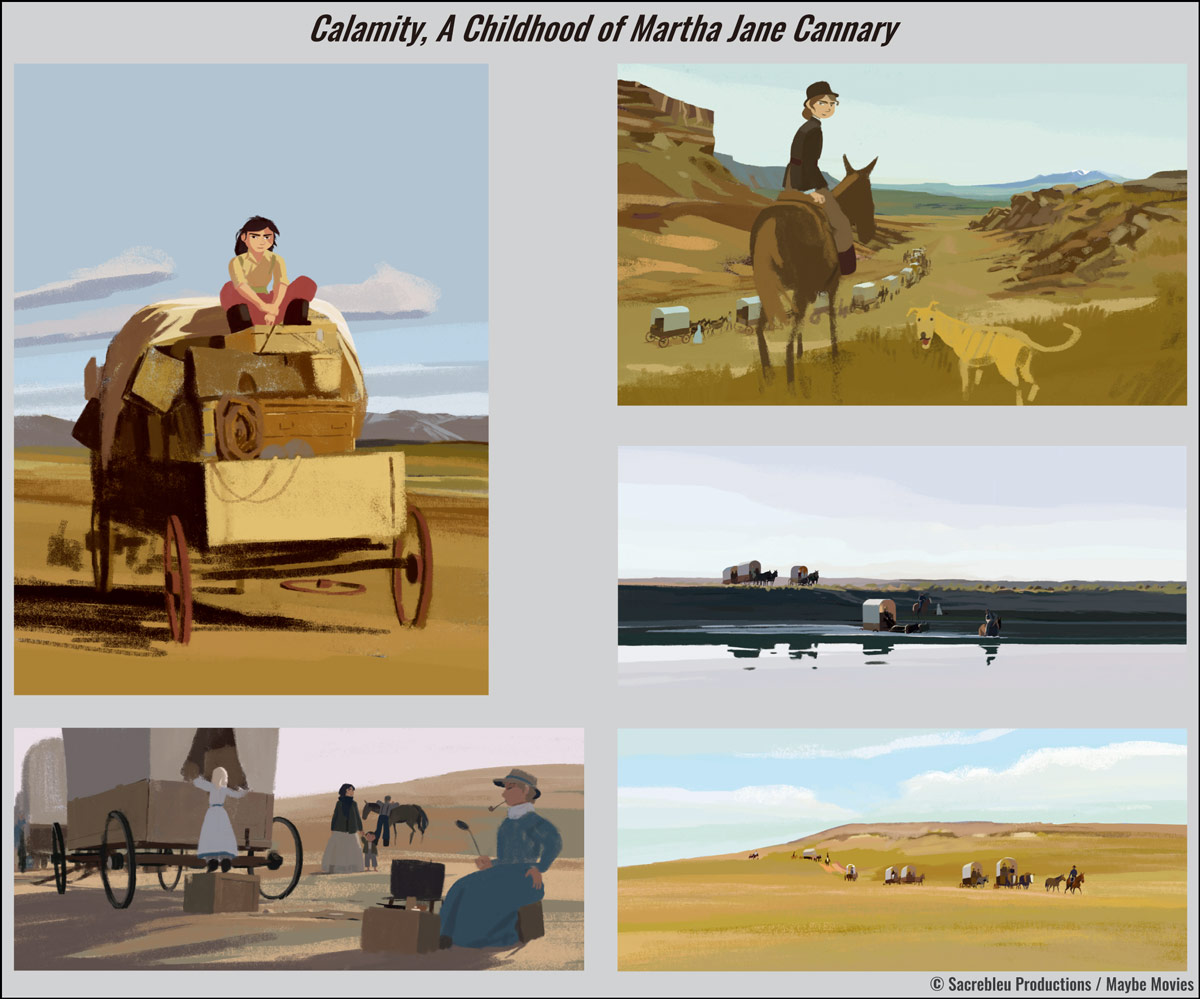 What it Takes to be Creative, and Messages to Emerging Artists

We asked Chayé and Han how they keep their creativity. For Chayé, it’s sketches, a lot of reading, and seeing movies.

For Han, it is a little bit of a different story. It is hard to motivate himself when he could tell that project would not be going in the right direction. He says, “For some time until Rémi starts his new movie, you have to eat, so you have to work on different other projects that are sometimes not as motivating. You still do the best you can, but it’s still very hard. The danger is when you get bitter of the business, because you know that no matter what I do, it’s going to be bad. It can kill your creativity. You become more automatic: ‘just do the recipe that I know, and that’s it’. That’s why it’s very hard to keep this motivation sometimes.”

Now, he is happy that Chayé starts his new project and thinks that refreshing yourself is important, like watching a lot of movies and living a good life. “I think Takahata said that ‘animation or cinema is how to express life, but how can you express life, if you don’t have a life yourself?’ That is why it’s very important to experience, and to live. The emotion you get from life becomes inspiration that you put into movies. That’s why it’s very important to observe and to feel.”

Their passion for drawing is the drive for them to continue animation. For Chayé, drawing is a way to interpret reality. “Simplify it to the core, and it’s the reason I like it. It’s so powerful.” Han adds, “You can cheat to communicate the emotion you want. Of course, it has to be good drawings, and also, we know how to do it. We basically started our career in 2D, and then why change to another technique? Something to learn again. But I think we also believe in the warmth of 2D animation”.

Chayé describes the attractive points of 2D animation as a direct interpretation. “It goes through your interpretation. When you deliver a drawing, and you deliver something that you have seen, and that you go only through the eyes of the character, and the impressions. It’s not the machine that creates it. I used to do 3D animation, but you can have the power of painting with 2D. You are able to put emotion into the sky, and you will feel the emotion through the way it’s painted. You have the tools of the painting and you have the tools of the cinema”.

Han uses examples from Long Way North to elaborate what they mean. “When you see the background or character, there’s such a simplicity in the shapes. So simple, but at the same time, it says a lot. I don’t know if it would be that easy to do that in 3D, for example, to have such a simple character, and a simple background. It would take so much time to put the warmth of 2D into a 3D process. With 2D, you just have to draw and paint, and that’s it. I guess it’s less complicated”.

Han also warns of the recent trend of people saying 2D animation is old-fashioned. He thinks it is more to do with the marketing. The general public are more exposed to 3D animation than 2D animation, due to the way 3D animation is marketed. This does not mean that people do not like 2D animation. It is a matter of communication.

Lastly, we asked them whether they could give some messages to young and emerging artists for their careers.

Han leaves a message, “I would say that animation, like every artistic technique or craft, takes a lot of time. It takes a lot of time and a lot of work to do. Also, it’s not only about drawing, but it’s also how to feel and to observe. Some people are so focused on technique, which I can understand, but I think it’s very important to understand that the reason we are doing this job is for an audience. It’s very important that we have ideas. Always try to find ideas and the right way to create emotion. For students, I know that we want to impress our friends, and other students, to be the best animator, the best of all. At certain points, it’s very important not only to focus on that, but also how to communicate emotion to move the people. That’s something that students shouldn’t forget. If you’re too focused on technique, then that’s a colder artist and a cold technician. I think it’s very important, as Rémi said, to do your movies or tell stories, but also do your job in a way of creating emotion, which is laugh or cry or whatever. Just aim towards the audience. And finally, practice, a lot of practice”.