Music plays an important role in the animation. It communicates the right emotions through music. Chayé decided to work with Jonathan Morali, who is the singer and composer for a French pop music group named Syd Matters.

“Very often, for a one-and-a-half-hour movie, you generally have something like one-hour-and-ten-minute music. For us it’s 25 minutes of music only. It’s a very short amount of music in the movie. The music is given really musical sequences with a clip of running or travelling, that sort of thing. We have very little music because it’s a movie based in Russia during the 19th Century. I didn’t want to have something similar to 19th Century music, Russian music, that sort of thing. I wanted to have contemporary pop music to give a feeling of modernity in the movie.”

“Basically, it’s very simple to work with Jonathan. I gave him the animatic. Very often we already have music by Syd Matters in the animatic. It was a good tip for him. Sometimes he will do very simple music with his own instruments, and after that he will ask musicians to do the complementary music. It’s really, really easy to work with him, definitely. The song design was very important, too. We had a big element of song design. The song design team had a huge amount of work, and they had to recreate a lot more, the boats, the storm, and the icepack. It was a lot of ambience, and they did very nice work.”

We asked what was the most difficult and enjoyable part throughout the journey to Chayé and Han.

He moves on to the moment he enjoyed most by showing photographs of the team (Picture 10).

“The best moment was probably what you can see here, when it was in the studio. I have some very nice photographs here made by one of our animators. That was the team. Stefan, the graphics supervisor, the artists team, and animators. For me, that was the best moment, when everyone is working together. It was a really good ambience, very nice people, very focused and very dedicated to the work. Very easy to work with. I remember the summer. That summer was especially really nice. The doors were open, and we were having parties at the studio and had a really good time. That was really cool.”

Han says that his most enjoyable moment was also his worst moment at the same time.

“It’s funny, because I have to explain that it was so enjoyable to work with this project and all the people there. It was also so difficult because it caused us so much work, pressure, and things to do. This is why it’s funny because when I stopped work I said ‘Never again, it was too much!’ But right now I’m actually ready to work again on Rémi’s next project! It’s the funniest thing. I would say my whole production was the most enjoyable moment and also the most painful.”

For Han, the difficulty added up when he had to supervise three different teams, for three months, at the same time. The biggest team was under his supervision. There were animators, assistant animators (they call them ‘animation drawers’), and the Danish team under him. “It was crazy and difficult but at the same time it was less stressful when everything was flowing great”. 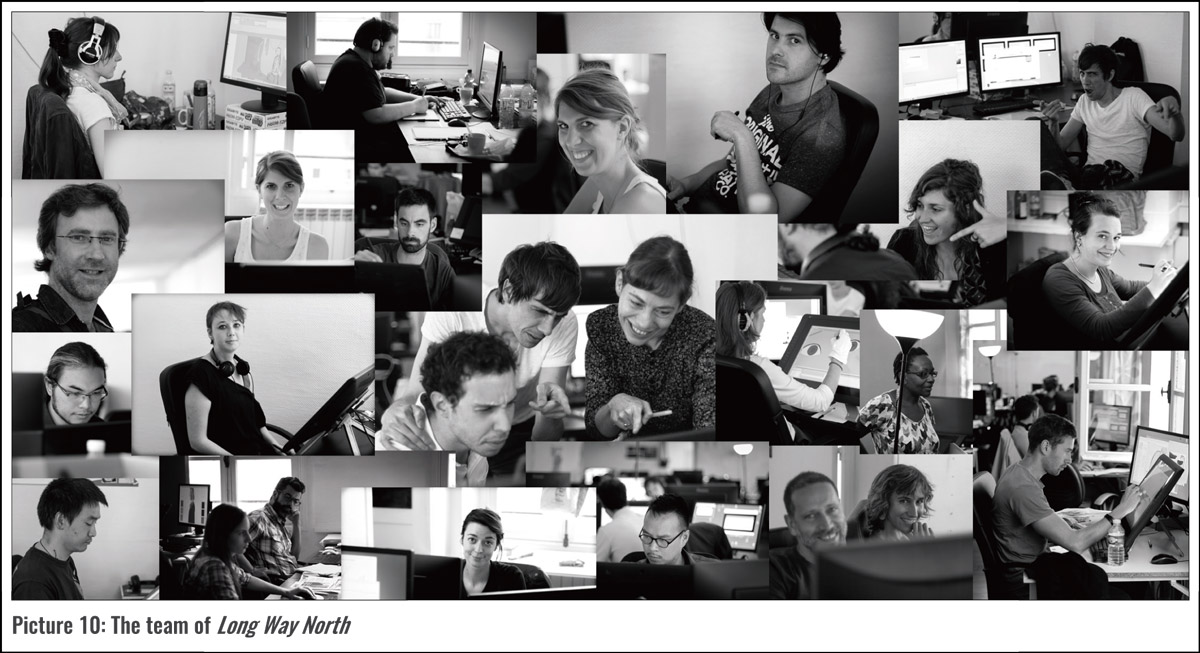 Trips for Screening the Film

After the film completed, they had trips to screen their film in various places. At one point, they made it to the USA and visited Pixar, and LAIKA in Portland, Oregon. They were, first of all, amazed with the size of the studios. They say that their entire movie had about 180 people at the end credits and their studio is about 40 people which is much smaller compared to the size of studios with 2,000 to 4,000 people. They were also astonished and impressed with the environment that American studios had, such as pools, gym rooms and screening rooms.

Chayé describes his experience, “For me it was like ‘bah!’ It’s very strange because I’m used to the size of European animation studios. I’ve been working in it for 20 years, and I only know that sort of size of building, which is very friendly, and very easy. For me it was very, very strange to go there. Especially Pixar. The studio in Portland is more human-sized.”

Chayé was impressed with the stop motion facility at LAIKA. They had a chance to have a sneak peek of Kubo and the Two String and were amazed with the beautiful art and craft.

Han says, “I would say the same as Rémi when I saw the studios. I stayed two weeks so I could visit Disney, Dreamworks and Paramount. When I visited Dreamworks, it’s crazy, it’s almost like a resort. It’s like a city that you go to during your vacation or holidays. You see what I mean? You see all this food out for free, it’s just ‘wow’, it’s paradise. But at the same time, it’s too huge. When I see this kind of thing, it’s too much. Of course, I really like it when we stay, almost like a family team. There’s so many people, and when they work on a project, they’re just a little piece of it. Most of the time, they have been thrown out because sometimes, projects have to be cancelled. Sometimes they have to re-write or whatever. It was very attractive at the beginning, and I said ‘oh, I will spend three months there, for fun‘ but then of course, for me, I wouldn’t be happy, personally, to be in this studio.”

Han recalls his experience of screening Long Way North at Pixar, Dreamworks and LAIKA as amazing and very positive. They showed their film to Pete Docter and Ronnie del Carmen, the directors of Inside Out, and received very positive feedback. It was the same in Dreamworks, and they had a great opportunity to talk with the creators and famous animators there. At LAIKA, they had a chance to show the film to the director of The Boxtrolls. They talked with him as well, and his impression was very positive.

Han says that the impression they received for the film in Japan was similar to the ones in the USA, although the USA and Japan have a different culture. He had a chance to talk with Ryuichi Yagi, one of the juries at The Tokyo Anime Award Festival 2016 held in late March 2016 in Japan when they won the Competition Grand Prize. Han was very humbled and pleased with an impressive speech given by Yagi during the award ceremony and his impression of the film was very positive. He also enjoyed talking with Japanese animators and directors including Isao Takahata, the director of Grave of the Fireflies, and Toshiyuki Inoue who got him into the animation industry.

After the award ceremony, Han had a chance to visit Production I.G in Tokyo. He was stunned by a huge map of Tokyo, indicating different locations with a lot of pins. All the pins show addresses of all the freelance animators that they are working with. “It was crazy to see every address on the map, and in the main entrance of Production I.G, there is a cabinet with a pigeon hole, which has a door. A freelance animator doesn’t have to go inside the studio actually, just go to the entrance, open the door, take the scene, put something back, close, and go home. It’s just ‘wow!’ There are also all the notes from the animation director and things like that. It’s such a huge organisation, it was crazy”.

There was also a screening event of Long Way North as the award winning film at The Tokyo Anime Award Festival 2016 on 28th July in Tokyo. The director Isao Takahata appeared as a guest speaker and made a speech. He mentioned that he hopes that the Japanese animation industry will make more animations like Long Way North with a message that would mean more to your life than just entertainment, although he does not watch recent Japanese animations, so a lot of his words should be taken with a pinch of salt.

Impressions of the Film Around the World

Long Way North has been shown around the globe. Han thinks that the impressions of the film from professionals are all quite similar. “I think they all liked it. Even if they don’t like the story, they at least liked the graphics, the imagery. Even if they don’t like the graphics, the imagery, they liked the story. Basically, they all liked it”. He is also happy to see that a general audience enjoys their film. He saw a Vlog of two kids being interviewed for a magazine at TIFF (Toronto International Film Festival), and those kids had enjoyed seeing the film. “The film is quite universal, which is very nice and unique. It’s for all audiences to enjoy more, not only for kids but also for a lot of adults”.