The Important Role of a Supervisor

A supervisor is a core of the film’s production process to maintain the overall quality. Their role requires a lot of different responsibilities. Han says that it is very important as a supervisor to interpret what the director wants in terms of the mood, and check every scene, including small details, whether it follows the director’s intentions before showing the director. The supervisor serves as the first wall between animators and the director.

Chayé says that Han contributed to the film more than that by describing him as “the guardian of the character”. Han had sensitivity and paid attention to every single detail to make sure that it is the right movement for the characters. Chayé explains, “Liane-Cho knows how the character will act, how they will move. It’s a very intuitive and very sensitive way of ‘is it him, is it not him?’ and ‘is it her, is it not her?’ For example, he animated the character adjusting her own hair. Is it too girly or not too girly? You will find the balance for the character. He knew her very well because he had access to the whole story. He knew from where she went and to where she was going. He was in charge of controlling every gesture, every acting of every character that will fit in the progression of the character, in the character itself.”

Han adds, “My role is actually to ensure homogeneity. Because of the budget, I have to find a way to make things economical. I have to communicate it to the team as well. In this movie, it was quite special because I was supervising the posing, the animation, and the animation drawings themselves. I could sometimes control the whole process, and sometimes I could anticipate the problem that would happen on the next stage, and try to make the right corrections on things. I sometimes had to correct the animation, but directly in the clean-up. This is because I had this overview of everything. I was also doing storyboards so I know that the mood and the expression have to be like that. For example, in moments Sacha has to communicate this emotion. After that I showed to Rémi for approval and Rémi gave some corrections and he communicates with the team. It was more or less functioning like that.” 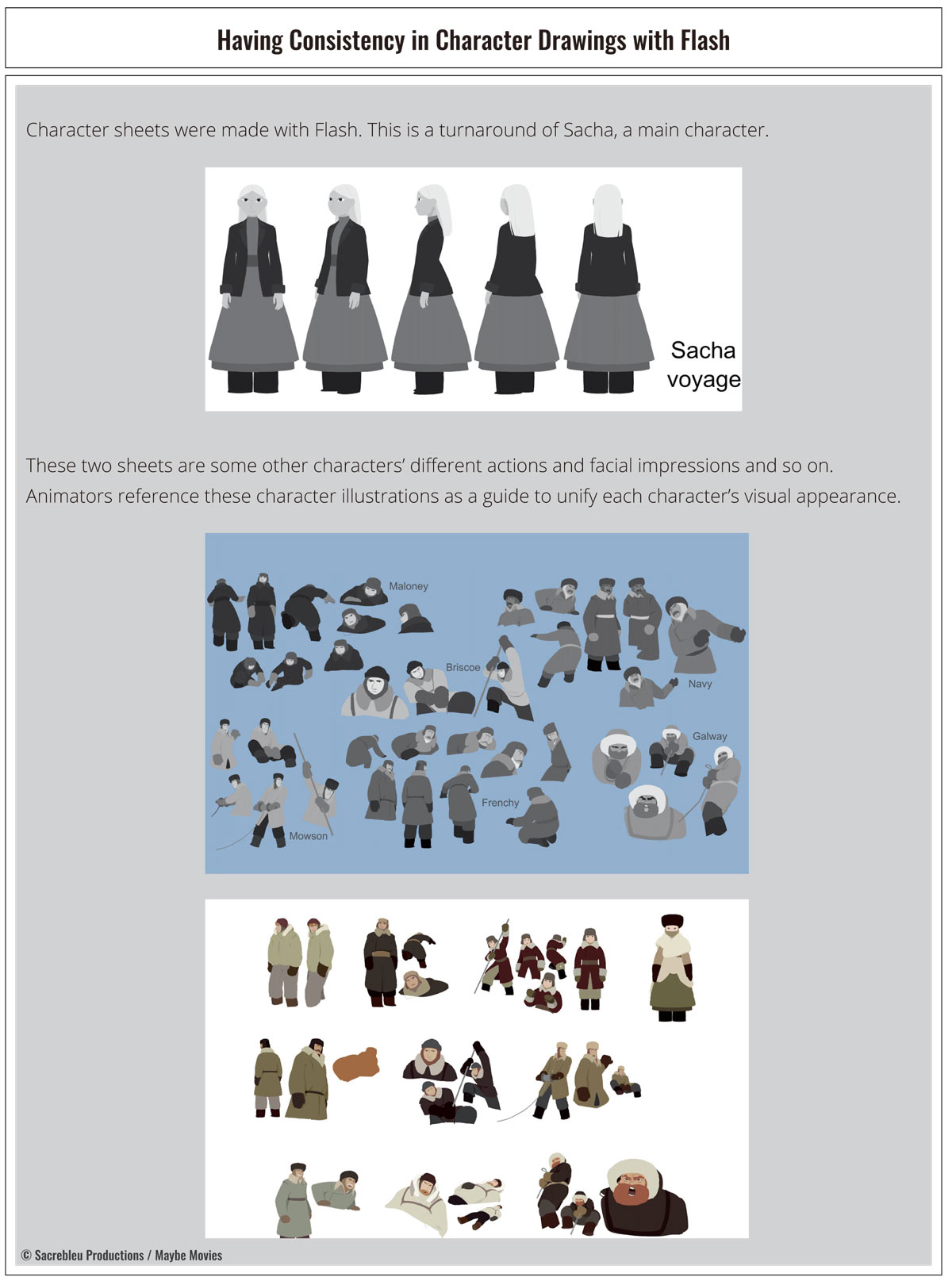 Both Chayé and Han say that it is all about the emotions in the storytelling, and that is what they cared about the most. They made sure that the characters communicated the right emotions to the audience. To achieve this, Han says that he talked with the team a lot. “I was listening to their ideas if they had suggestions, and we had briefings with Henri (producer), and try to find the ideas.” He continues, “We couldn’t fail in the emotions of the storytelling. It had to be the right storytelling, emotion, and rhythm, and that’s the most important. Some animation geeks care about the drawings, but the average audience are more focused on the emotions of storytelling and rhythm, rather than ‘her eyes are not exactly on model’ or whatever. We focused more on what’s important for the audience.”

Han recalls his conversation with Toshiyuki Inoue, one of the juries at the Tokyo Animation Award held in March 2016 and a well-respected animator in Japan, and Inoue’s comment shows what they tried to achieve was successful. Inoue asked Han, “How could you have so much consistency in the movie? There is no off moment or whatever”. Han says, “Firstly, there are off moments but it’s just that he didn’t see it (laughs). It is because he is in the movie. I think it’s because we tried so hard to make the emotion and rhythm right, that he forgets about the off moments… He was more into the flow of the movie.”

Han points out that simplified characters makes it harder to keep consistency. “Simple doesn’t mean easy to draw, actually. Being simplified means that it is also even harder because you have to make it very right. Toshiyuki Inoue was very impressed and said that he often had to correct. In my case, I worked hard on the acting and the performance, and people who are watching the movie could forget about the small technical issues. They were just into the movie and I think that is a very good and unique feature. I was very honoured by the comment by Toshiyuki Inoue and it was a great complement from him.”

In Long Way North, the actions of the characters and background scenes matches the story. Han explains that it is because of the storytelling. “I think it’s really the storyboard that creates the action for us. The storyboard tells us things such as how you place the camera and how the character will appear on camera, all these kind of things. It was more about creating a dynamic, and not the animation itself.” Chayé agrees with Han that it was probably more about storytelling than impressive animation.

To deal with the difficulty in animating action scenes, they had a scale of one to four determining the level of difficulty in animating each scene. For them, emotional scenes were given higher points in terms of difficulty. Chayé explains, “We had different levels of difficulty for each scene and we were deciding with Han the level of each scene. For us, if it’s somebody running or somebody doing an action scene, it would be a one or two, the lowest level of difficulty. For example, at the end of the movie when Katch is looking at the horizon and sees that the boat is not here and everything. Suddenly he is panicked, and he looks at Sacha with full of fear and disappointment (Picture 9). This scene had the highest difficulty level, like four. We wanted the emotions to be exact and to be right. That was the way we deal with scenes of varying difficulties. Action versus emotion, and the rhythm of the movie was what we tried to make tense and to stretch it as much as possible. We wanted people to be inside the story.”

Chayé recalls his conversation with one of the animators on complex staging to make it better and he believes that input from the animator is indispensable. “Remember, some very good animators give a lot of good input for staging. For example, we had intricate scenes with a lot of characters. There is a wreckage in the icepack, and the whole crew of 12 people were there. I remember that Nicola, who worked with Liane-Cho on the whole sequence, had a lot of input because the storyboard was unclear. We had a lot of problems in editing it, there were dialogues that had to be redefined at the very last minute. The whole thing was a little bit fragile and the animator worked mainly on staging and it was a really, really nice input.”

Building a Talented Team, Bounded with a Great Story

A creative team is essential for a successful project. We asked how they could gather talent for the best team. Both Chayé and Han say that it is networking. They also work on different film projects, and this helps them build a network of talent. Chayé says, “In the beginning I knew several people, and after that, I knew mainly the others that people brought in. Liane-Cho brought in a lot of people he knew. I didn’t know them at first. For example, Liane-Cho advised me to go to him for the color artist, that sort of thing.”

Han adds, “The more people you hire, they also have connections and they can introduce some other talent, it’s really like that. I mean we all work in different studios, we meet together again and make friends. I was in Gobelins, so I know my classmates and I also know a class above or under me or so at the same time. We know each other. After work we would just have some drinks and get drunk together, and make friends. And then, we know ‘Okay, this is a friend. I know I can trust him and I should show him my project’.”

Chayé compares his creative team as to a crew on a boat. “Very often, I make a comparison with the sailors who go for like six months on a boat. They have to go through storms, bad weather and that sort of thing. They have to live together for a while. You need to have some people that you know will react well if there is a storm. It’s very important that they need to be dynamic and good. They need to know how to work in a team.”

Han says that it is very hard to have the right people, and they were lucky to have a great team for Long Way North. “We had the right people most of the time. People were really motivated, enjoyed the project, and liked to work on it. That’s why they gave a lot of themselves and got involved. The good thing with Long Way North is that they wanted to show off their talents. They worked for themselves. They knew that there was a financial issue but still agreed to do their best because they really enjoyed and committed to the project. They did not think about themselves. They thought about the movie. ‘We wanted to work on this great movie, and make it as great as possible’.”

Henri Magalon, one of the producers for Long Way North, describes his role to bring the right people on board. “It’s also a love for Rémi’s personality. I think that he’s quite generous with everybody. Among the producers, we had a good talk about what we needed to do. We were very open-minded. My personal involvement with the film started in the middle of the project. I spent three years with Rémi. My main goal in life, and in this movie in particular, was to have a great story. With the right story, everybody knows why we are here and what we have to say in the film. That really bonds people together. When the story is not perfect, that’s when the team goes wild and no-one knows why we do this and the character does that.”

Han agrees that sometimes a director could be distant from the rest of the team. For Long Way North, Chayé was close. “Most of the time, the whole team were having lunch all together with the director Rémi and talking. There was a huge connection between the team and the director. It helps so much in the relationship. When the team respects and loves the director, they all work together to help him and the movie.”

Magalon continues, “Rémi was not afraid to meet people and to talk. Some directors hide themselves in their office while they try to figure out what they are trying to do. Regarding this point, Rémi was really generous and willing to talk. He knew what he didn’t want and what he wanted. That was one of the great things we had. We had a limited budget, so we had to rent an open space. This actually turned out well. It was a good way of seeing that Rémi was there with the team and very accessible. People didn’t want to disturb him because he was talking to each one of them all the time, and it’s great chemistry for the team.”