Here are our two special long interviews with Guillaume “RUN” Renard and Shojiro Nishimi, which uncovers the story behind the film Mutafukaz and make you deep-dive into the Mutafukaz world. RUN is the author of the original comic series Mutafukaz, which has sold over 135,000 copies, and is also the director of the film Mutafukaz. Shojiro Nishimi is the co-director and the lead animator. He is a famous Japanese animator and director known for spectacular action scenes he has created. One of his world renowned works is the character design and animation direction of a STUDIO4°C’s film Tekkonkinkreet (2006).

Interview with the director and author Guillaume Renard 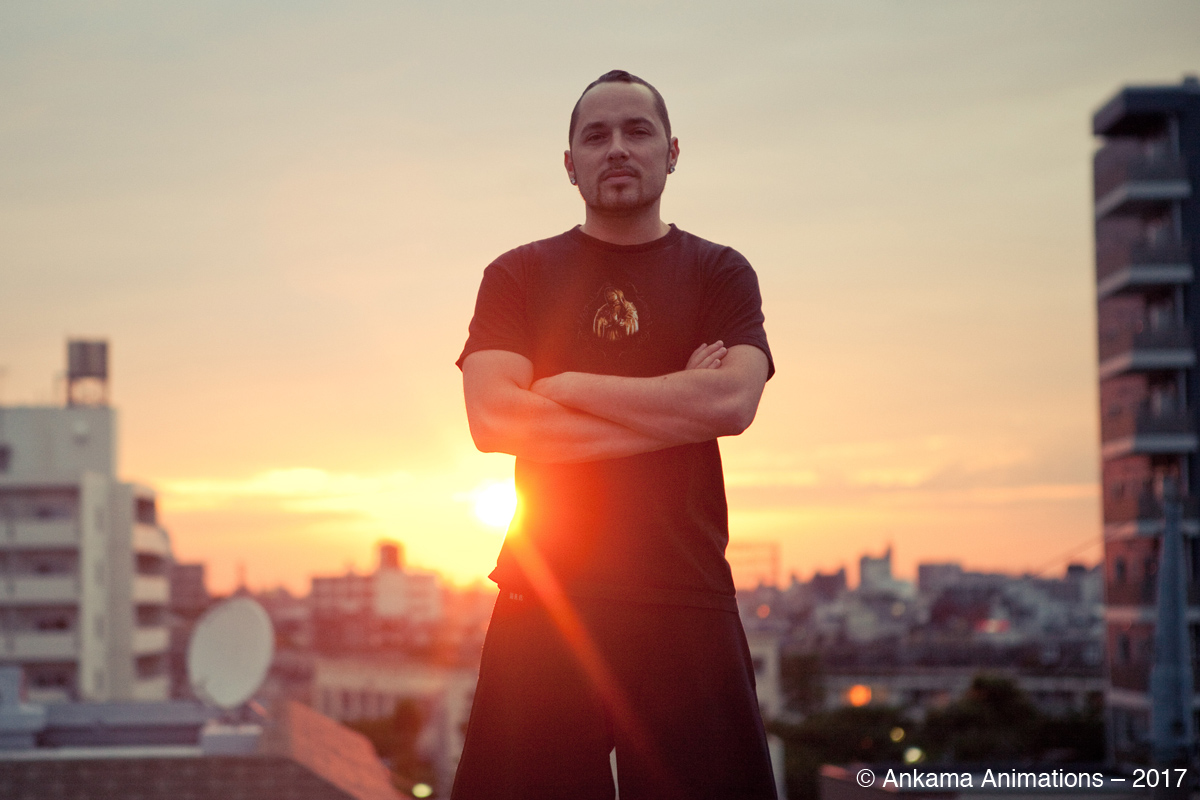 Animationweek (AW): Why and how did you decide to adapt your comic to an animated feature?

Guillaume Renard (GR): I’ve always loved animation, and in 2003, long before the comic books, I’ve created a short film called Operation Blackhead, which laid the groundwork for the Mutafukaz universe. So, when the opportunity to create a full-length feature film with a cult animation studio presented itself several years later, I didn’t hesitate. Anthony met Mrs. Tanaka from STUDIO4°C, and he presented a few of our comic book projects to her. Anthony has always been open to cross-media experiences, and it just so happens that Mutafukaz was what was closest to the studio’s DNA. A few weeks later, we all gathered around a table to discuss the feasibility of the project to adapt Mutafukaz. STUDIO4°C was already a guarantee of quality, so I knew that the project was in good hands.

GR: I left the directing to Nishimi San. He was the top guy in the field. Most of all, my role was to respect the universe, the scenery and the characters’ personalities. I also had to find a few production ideas that would work with the script I had written. I did some very basic work on a storyboard. Strictly speaking, the animation part was down to Nishimi San. Then, I threw myself into the post-production, where Nishimi San gave me a certain leeway: the sound design, the music and the various graphical additions.

AW: Where did the story, characters, and universe of Mutafukaz originally come from?

GR: It’s a very long story. I wrote my first Mutafukaz comic strip in 1997. At the time, it was already about creating a universe that resembled everything I liked – even diametrically opposite things – while remaining consistent and relevant: film noir, 1950’s science fiction, Lucha Libre, Hip-Hop and gang culture. Over the course of the years, the universe became more refined, and everything became clearer to me. Mutafukaz is a mass of pop culture mixed in a gigantic cocktail shaker. 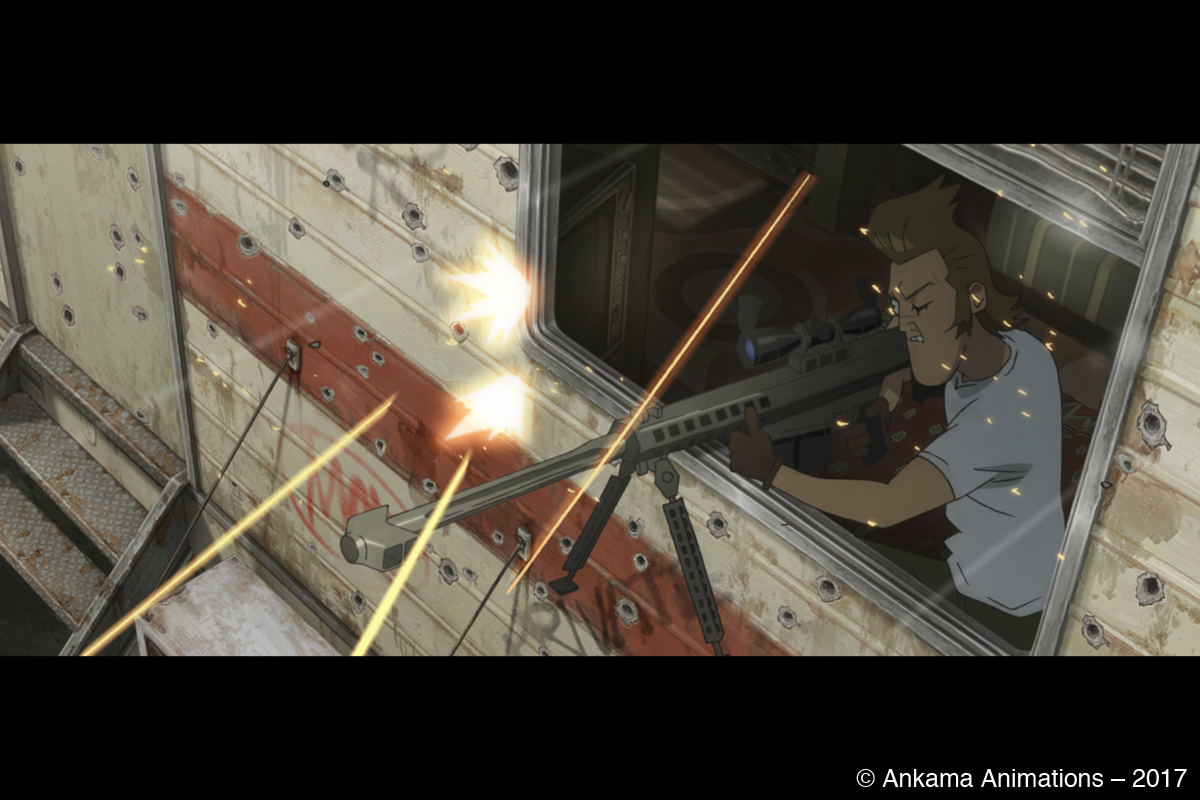 AW: How did you adapt your story of the original comic series to the story for the film?

GR: It’s a question of focussing 600 pages of the comic book into a film that’s an hour and a half long. It’s not easy. In comic books, there are many situations with many offshoots, and a huge number of characters are dealt with. For the film, I decided to concentrate on the backbone of the main story so that everything flowed and was accessible, despite the prolific universe. What story does the Mutafukaz comic tell if you remove all of the outer layers? A story about three loser friends faced with adversity. That’s what the film’s about. You can find many scenes from the comic in the film, of course, but also reinterpretations of certain parts and a rearranged environment. In the end, the comic books and the film complement each other and coexist perfectly. And one important thing: you don’t need to have read or seen one to understand the other. The two media each stand on their own two feet.

AW: This film was co-produced with a Japanese studio STUDIO4°C. How did the two production teams get together to work?

GR: The main part of the production was done at STUDIO4°C. There was a lot of work involving pre-production, many exchanges, and diverse references, so that Nishimi San was completely immersed in the universe (most of the references were completely foreign to him). It was a big challenge, but it was also very informative. I learned a tremendous amount alongside them. They’re people who are open, intelligent and curious about new visual experiences. I went to Japan several times throughout the year for an overall review of the situation with Nishimi San and the team leaders. Besides that, we had meetings over Skype, and validation was done over the internet. Once the images were completed, I tackled the post-production head on. The sound is just as important as the image.

AW: Could you please let us know your favourite character and scene in the film and why?

GR: I’m very fond of all of the characters in the film – even the worst ones. My favourite scene is still the motorway chase, because it’s fun, dramatic, and the music carries us along with the characters towards this crazy, headlong rush. But one scene from the film really moves me: when Luna holds Angelino’s hand, I feel all of the trauma from his childhood. And also the final shot, which I find both dramatic and poetic (one of STUDIO4°C ‘s trademarks). 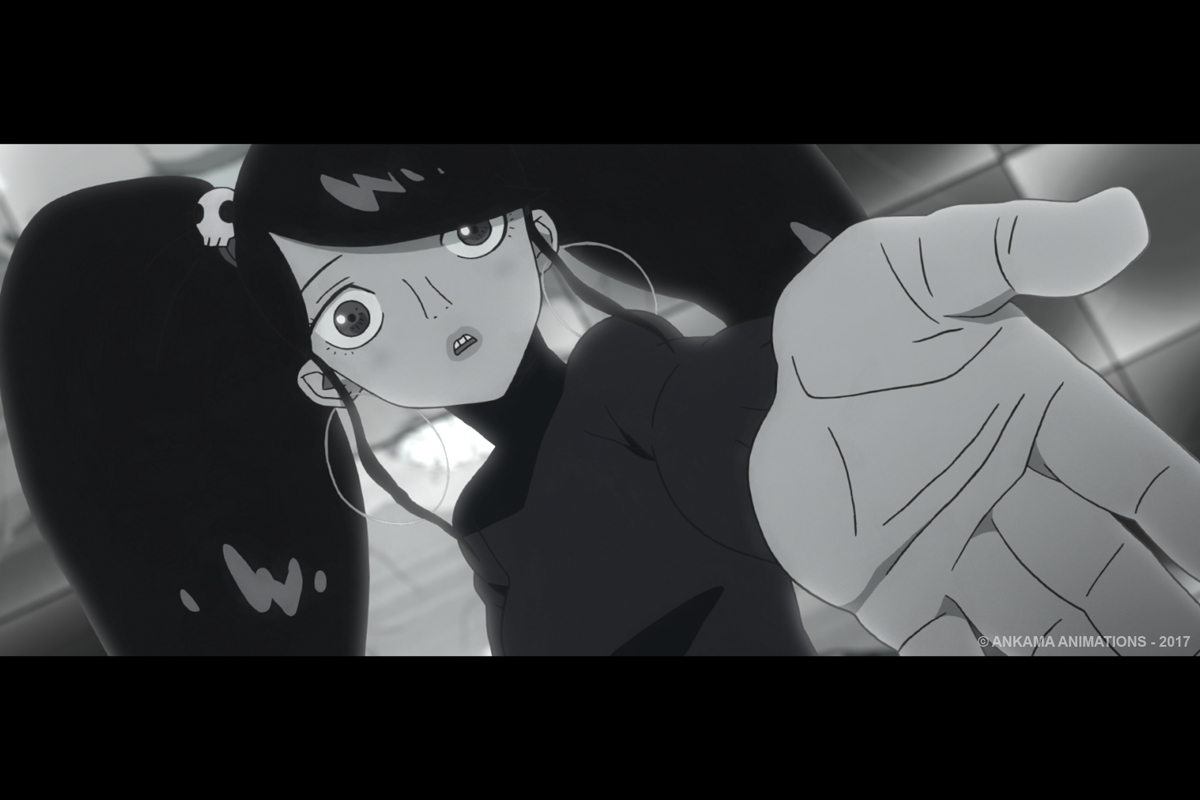 AW: Could you please tell us about music? How did you design the music and how did you communicate with the composer to share your image?

GR: There was some very organic directing. I knew exactly what type of score I wanted. The universe is highly mixed, and I also wanted that to be shown visually, through a few touches of film noir music, in a very modern continuum. To do so, I called on two composers who didn’t know each other: the Toxic Avenger, from the French electro scene, and Guillaume Houzé, with a more classic approach in terms of cinematography. I wanted them both to work together in order to mix their universes. I directed them with a few key words in order to inject some positive energy each time, and as they both work on instincts, there was a good dynamic. We recorded one part of the music with an orchestra in Paris. I’m really pleased with the film’s score.

AW: What message or experience did you want to deliver to the audience through this film?

GR: By way of this film about friendship, firmly focussed on action, I ask questions about the different fears of the modern world: terrorism, ecological threats, the worrying rise of conspiracy theories and the motivation towards radicalisation of young people who have become disillusioned. Each person will find their own answers.