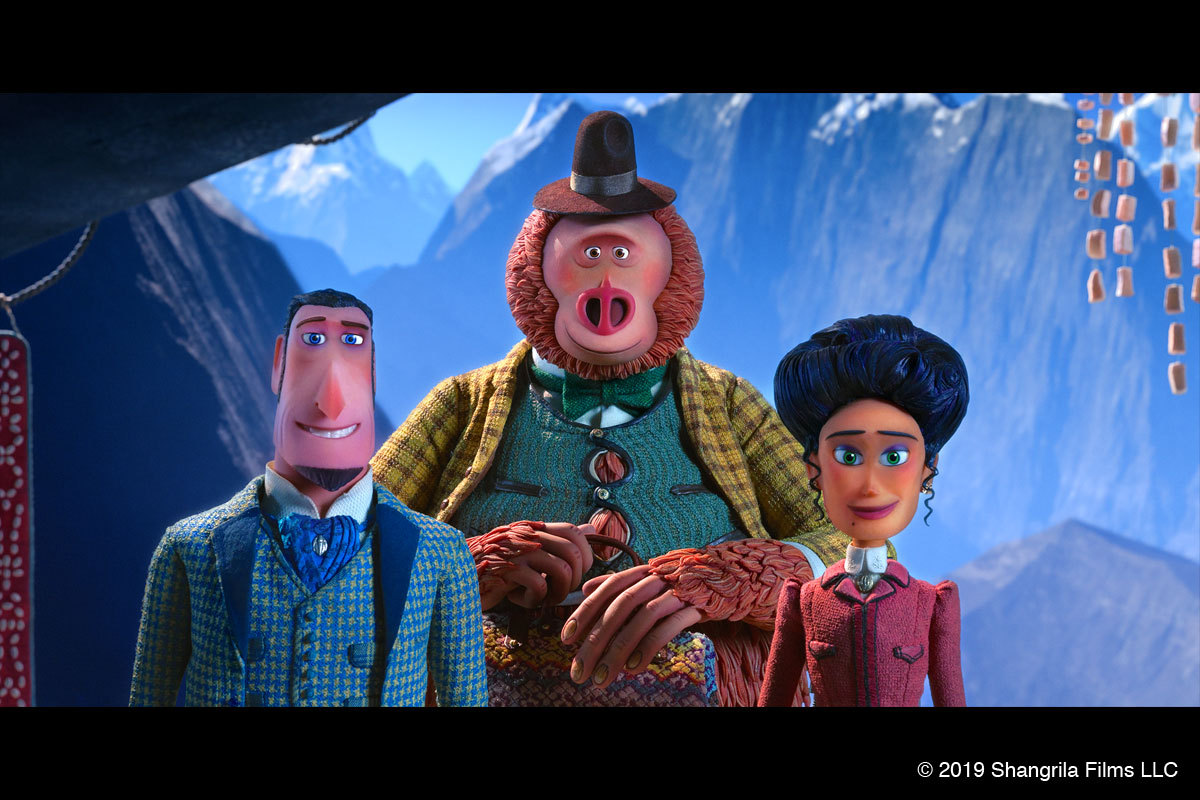 AW: Moving onto the action and the camera work, especially during the scenes on the ship, is quite incredible. In terms of storyboarding and shooting stop motion, what was the toughest challenge in accomplishing those scenes? Am I taking you back to a dark place?

Chris Butler:  The whole thing was tricky! I didn’t suffer as much as the animators did, let’s put it that way, because all that ship movement was done with the camera, rather than the set. We didn’t move any sets. So, when Sir Lionel was running on the wall or when any character is off balance, the animator is entirely creating that on a still set, which is mind blowing. They devised a template system so that they would know where the horizon was but even so, you’re frame-by-frame emulating imbalance on something that’s not moving, and I think they did a fantastic job. They created this really dynamic and rich, kind of like a camera movement script. And the way stop motion works, you will do a camera test for a shot first, and I’ll see that in the edit, and I’ll give notes long before you animate.

So, we constructed a rhythm of movement through the whole scene. We did storyboard it to death. Because for me, that’s where I’m most comfortable, coming from storyboarding and because you don’t get anything for free in animation, you have to know exactly what you’re doing. You don’t get coverage. You don’t get to move the camera mid shot because it’s not working. You storyboard exactly as you want it, so you’ll know exactly what you’re shooting. And you make the movie several times; the first time you make it, it’s all storyboards. A big action sequence like that was a big thing to take on. I was very influenced by early Steven Spielberg action sequences where there’s a real narrative to it. There’s a beginning, middle and end, and comedic beats and dramatic beats like Indiana Jones. You have to meticulously plan every beat of that.

AW: The environments were amazing as well, such as the Yeti’s temple in the Himalayas, can you talk a bit about the story behind the design of the film’s universe and especially the background art?

Chris Butler: I come from a background of design, so I had very specific ideas of what I wanted to create in this movie. I think a lot of that came off the back of finishing ParaNorman (2014) and wanting to do something that was just visually very different. What’s exciting to me about the studio (LAIKA) is that we don’t have a house style. Every movie is supposed to look different from the one that came before, so when you start one of these things, you can go anywhere.

At the very, very start, I put together a look book, where I’d pull images that I found interesting. And that’s what I would take to the production designer and have those initial first conversations. My look book was made up of National Geographic photos, it was drawings done for 101 Dalmatians, the Disney film, by Ken Anderson, drawings done by one of my favourite artists, Warwick Johnson Cadwell, and some of the art direction from The Thief and the Cobbler, and illustrations from the art director of The Thief and the Cobbler, Eric Le Cain. A big thing for me on this was symmetry and patterning. Symmetry, because ParaNorman was so asymmetric that I wanted to do the opposite, and patterning because I felt emboldened by what we’ve done before, and I wanted a lot of look. In the past, I tried to kind of go for something maybe a little more sparse, less cluttered, but I wanted to clutter, and I wanted pattern on pattern on pattern, I wanted dense patterning. The Victorians themselves went nuts about pattern; wallpapers, bricks, tiles. We have this tendency to think of Victorians as black and white, and you know this Jack the Ripper fog, but the truth is that they loved rich colour. They loved ostentation, and so I wanted to get into that as well.

Nelson Lowry, the production designer, and I would sit down and just really talk about those influences and then it’s his job to try and make sense of it all. And I think he leapt at the opportunity to do something that was radically different from what we’ve done at the studio before. And I think that is the colour aspect of it. Because even though all our movies are different, they tended to be darker. And I don’t mean necessarily tone, although that’s true, but just palette wise. ParaNorman takes place at night. Kubo and the Two Strings (2016) takes place a lot at night. The Boxtrolls (2014) takes place under the ground, you know, there’s a lot of dark and I wanted to step out the shadows and into the light and when I pitched this to the heads of department, I think I said I wanted it to be a kaleidoscopic travelogue; what we’re aiming for is if David Lean made Around the World in 80 Days, starring Laurel and Hardy.

AW: And just on that, I think LAIKA continues to raise the bar in the visual quality of stop motion. Were there any new technical challenges that went into making this film?

Chris Butler: I think probably the biggest challenge was just the scale of it. Definitely the most ambitious thing we’ve ever done. Just in terms of the story alone, we don’t really return to many locations in the plot, they’re travelling around the world. And all those locations have to be built from scratch, and I really went for it in the script, and nobody stopped me! As an example, at the start of the journey, the character dynamics, these characters are not getting along. They are butting heads. And so, I wanted the mise-en-scène to reflect that in that they are literally on shaky ground.

So, a lot of their conversations are on a ship that’s moving, or on a stagecoach that’s rattling. I’m very impressed with myself, I’m like, ‘oh, look at me and my mise-en-scène!’ And then someone’s actually got to build the thing. I wanted tassels on the interior of the coach, and they all had to move, and they did that. And then counter to that, when the characters start to come together as a group, I could have set that conversation in a room, but instead I wanted it to be the most beautiful backdrop for this conversation so I put them on the back of an elephant in the Indian jungle. And again, nobody stopped me!

I think it’s your responsibility as a director in this medium, I think you should, we should be able to tell any kind of story, but I still think it’s your responsibility if you work in animation to take advantage of the medium. And that means things should be larger than life. We did do a few things that we hadn’t done before, such as with the facial animation. Previously, we’ve used a kit system where you create, thousands of shapes, and they exist in a library. And when you’re piecing together a performance, you are using effects from here, followed by a face from there, and you piece it together like a little jigsaw puzzle, and that served us really well. But I wanted the acting on this movie to go up a notch. I wanted a kind of sophistication and nuance to the facial performances that we haven’t achieved yet. And that meant every single one of our shots was bespoke. We threw away the kit system. Every single shot in this movie is a unique piece of animation. So, every set of faces is unique to that shot, and it’s 107,000 faces in the end. Again, ridiculous!

Another thing that we did that we’ve never done before was we used miniature puppets. I mean, I know everything is miniature, but some of the wide shots in the ice bridge sequence we had RP engineered miniature replicas, completely animatable of the characters hanging from the rope. We’ve never been able to do that before because the technology has not allowed us to create such detailed characters. Before they wouldn’t hold up on the big screen, but this was the first time we were able to do it and I think they fit in seamlessly you wouldn’t be able to spot in the movie that we’ve gone from a 13 inch puppet to a two inch puppet, you know? So, there’s a lot of stuff like that. 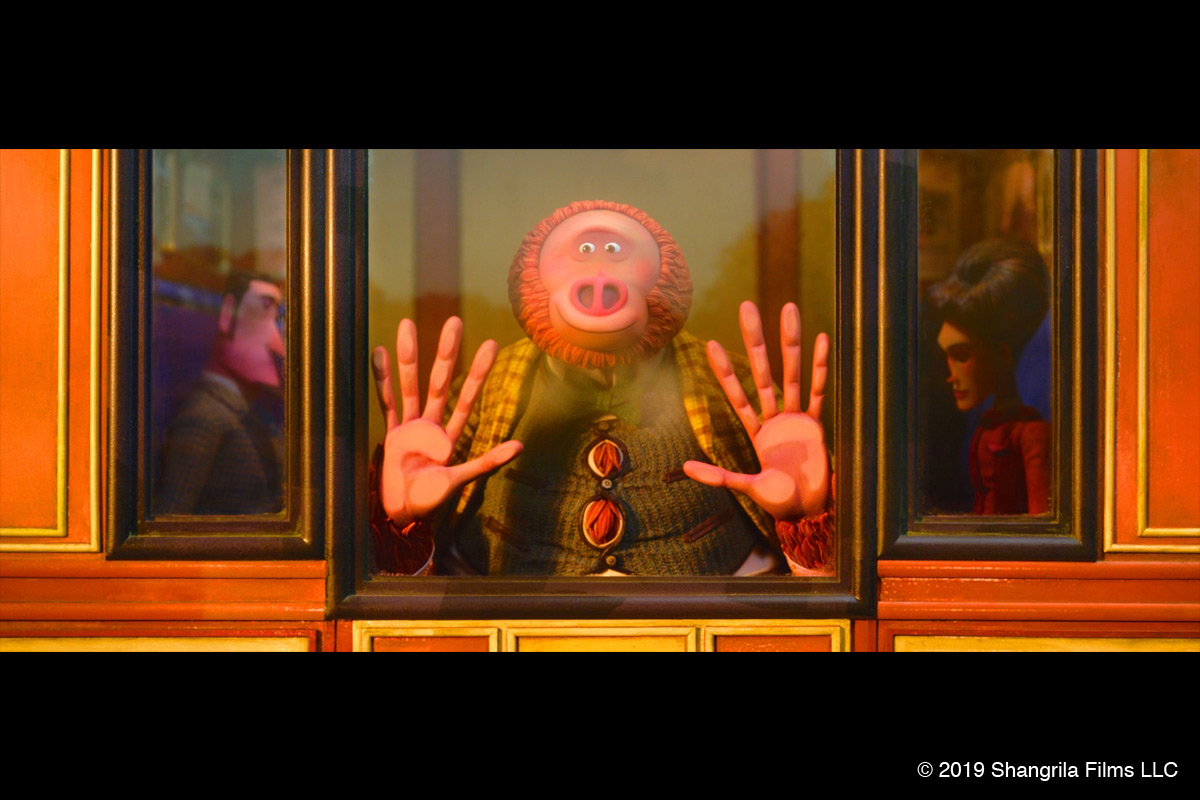 AW: And what was it like to work with Carter Burwell, the composer?

Chris Butler: He is one of my favourite composers, and every time I get to do one of these things I go to my list of favourites because why not? It was interesting because he wasn’t necessarily a natural choice for this kind of movie. He’d done animation before, with Anomalisa (2015), but for an action adventure movie, he was probably not the first choice for most people. And that’s kind of why I wanted him to do it. Because I’m always trying to think if LAIKA is going to do a big, bold adventure score, how can we make it different? And you get someone like Carter Burwell, and even he said it was a challenge for him because that’s not a world that he lives in, but his version of that is so beautiful. It was a real thrill to witness him at work and in the recording studio at Abbey Road so what’s not to like?

AW: You’ve just been nominated for Best Motion Picture – Animated, at the 2020 Golden Globes, alongside the likes of Frozen 2 and How to Train Your Dragon: The Hidden World. What does that nomination mean to you?

Chris Butler: Oh, it’s brilliant. I am thrilled. I think when you first start on one of these projects, you know, it takes five years to make and you’re not thinking at all about award season for publicity or release even, you are just thinking about making the movie. It’s a real honour, I think, to be acknowledged by your peers, particularly because the movie did well critically, but not in terms of box office, and I think what this gives us is renewed attention. And I think it’s an acknowledgement that we did something special, so it means a lot and I’m absolutely honoured.