AW: What kind of animation do you like to create in your studio in the future?

CK: We’re actually writing a feature on our own meaning we are not co-producing for the very first time, so we don’t take somebody else’s story and help finance. It’s a really exciting project and our partner in Canada is writing and developing it as we speak. There will be lots to decide especially the visuals however we also have to choose the other partners in a not too distant future. So yes still a bit far away but will be a big challenge to create an own IP surely the pressure is on mainly from oneself. Still it is a nice thing to start doing because now we feel we have the experience. After being involved in several films co-producing we think we are in a good position now trying to create something from scratch. When we started it was hard for us to understand how things were done exactly but after following the process and working closely together with these great talents, being part of those films, we think we’re now mature enough to do our own film for the first time.

CK: We’ll still continue doing co-productions like Song of the Sea and Long Way North. I can show you another one that we have started on called Miles (∗6). Again a different style from the pervious 2 films. This is a film that I myself am very excited about. I think the story goes in a completely new direction. Jumping to that after two films we’ve done, it will be a very fun journey. The director is very famous in France. Her name is Rébecca Dautremer and she is one of the best-selling children’s book illustrators in France and this will be her first film. Everybody knows her so it will be very exciting for people to see her first movie.

∗6: You can see the teaser of Miles on Superprod’s website (http://www.superprod.net/en/cinema/animation/development/14/miles) 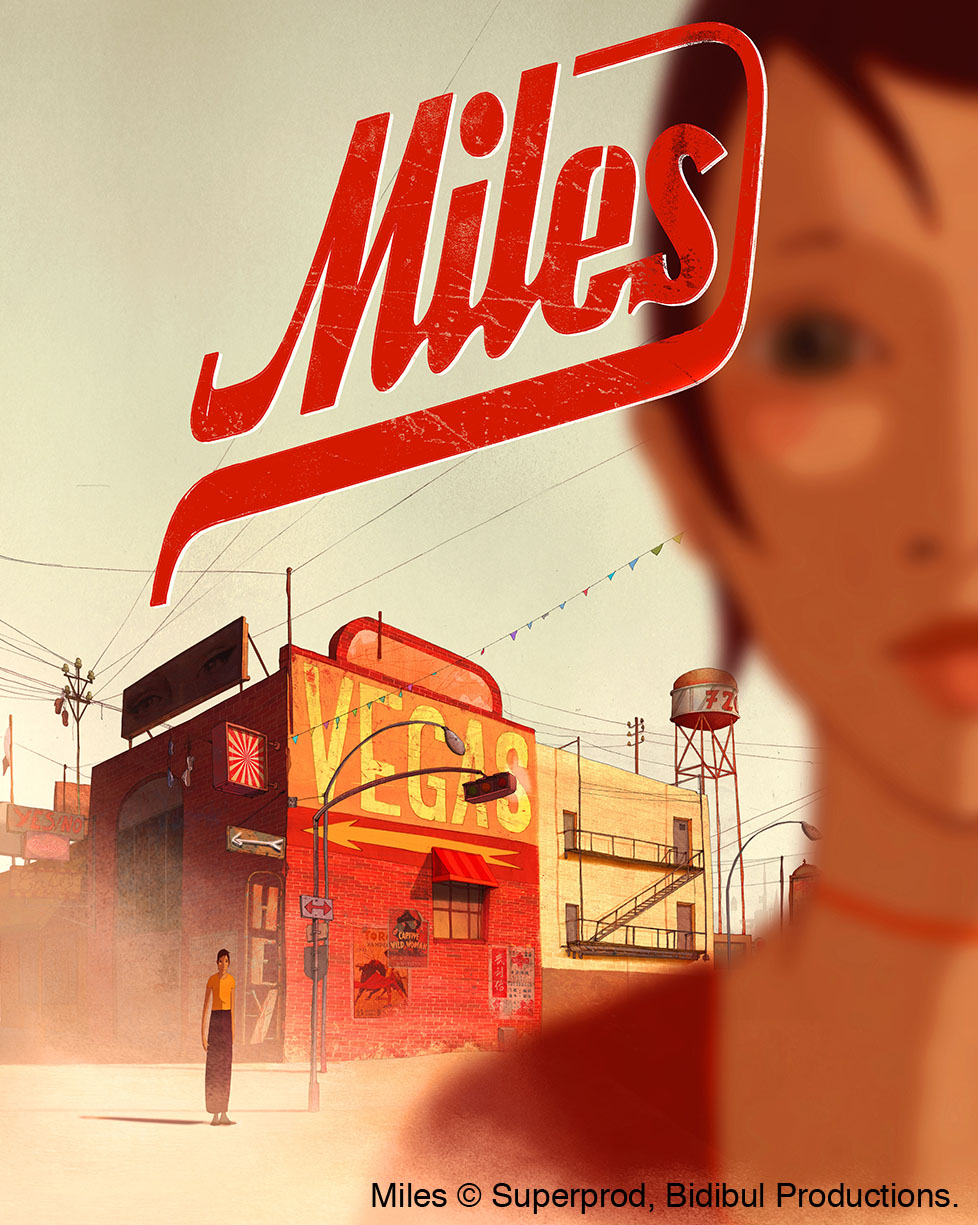 AW: By watching the teaser of Miles, I can feel that all the action synchronised with music well and everyone is very active and it’s actually very smooth.

CK: The characters are still done in 2D but some of the layout elements are 3D. They wanted more active camera moves. We’ll probably start this film sometime next year hopefully. Again it can be difficult to give an exact starting date as you remember putting together the finance for these films can take a while. But yes that’s one of our future co-productions.

AW: Wow. We are looking forward to the next film.

Future vision of the studio

AW: What is the hope or plan of development of your studio as an owner? 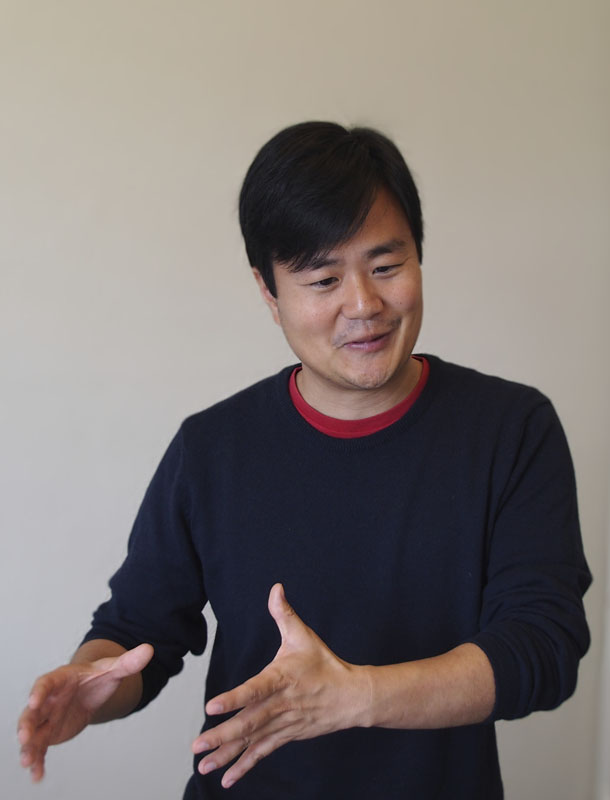 CK: Definitely continue to do what we like to do. There are two things. We had a conversation the other day about how big we want to be as a studio and I don’t see us right now being too big. Ideally I’d like us to be about 30 people but I would never prefer anything above 50 because I’ve been to studios where you feel like an alien and you hardly know anybody, which can make it hard to focus on just the one thing. Not that I don’t respect big studio set ups it just takes a huge commitment to administrate on a daily basis. But I would like to focus on one thing, like one film at the time, so we can do our very best making the best possible product. If we had to do five films, you have to prioritise and then you give less and it’s not so satisfying for me at least. I don’t know how everybody else thinks. Some people could produce 5 films or more per year. That’s great. But if I did that many, I can’t do them all that well and I couldn’t honestly tell people that I gave my 100% to all of them. I think you can only focus on that much at the same time and then you have to hire somebody else to take over on some of them, which can work fine but then it’s not me any more, then it’s somebody else handling those other films. So I kind of enjoy being a small studio focusing on the one task at hand. Giving it your full attention and as long as that’s the job I’m happy.

Sometimes you get offers which can be hard to refuse so you don’t know how it’s going to be in the future but at the moment that’s the studio we would like to have. Because all the other things for me is not so important, I never did this to get wealthy or to find my fortune. Then I think I would have gone with a different trade than animation, like stock exchange or whatever. I did this for the passion of what you saw and hopefully that is transparent through the work we do. So, for me it’s about the project. If I don’t have that great project to wake up to every morning there is no meaning to why I am doing it.

I guess that’s my indicator, to find great material that I would like to watch myself. I don’t think everybody necessarily wants to see what they do, sorry but I know a few. Of course I understand if some people have a company where they have to feed and take care of 200/300 employees. Sometimes they can’t be so picky about what they take in. I totally understand. If that’s the business you run and that’s what you like, that’s fine. We have a much smaller business and then focus on each job as they come along. I think that’s the heart in our company and I like the fact that we’re not more people. You just saw the room. We know everybody and that means that there is not this big hierarchy when you come to work. If there are 2,000 people, you can’t even meet the manager. I like that we can meet everybody and it’s a very calm and relaxing place to be. That’s the kind of place I would like to work in. Also people feel more responsible for what they do. Taking special pride in their job feeling much more appreciated because you are not just one out of a million. That’s nice because then your work suddenly means a lot and you can let them know each day. If I have 200 people to manage, it’s hard to know all the time what’s going on in the studio. I think these are some of the values that we really appreciate. It’s a bit more relaxing and allows a different way of working. Our studio is located in a small town as well creating a less busier atmosphere.

AW: Do you have any general advice for people who want to work for or be a part of animation industry?

CK: Besides having a passion for animation, which we all share, that’s one thing, but you also have to have a passion for that particular job you do to excel in it. I think for an animator it’s a different passion besides enjoying the film and the artwork. The passion for me at least, as a producer, is to network with people because that’s my biggest job. It’s my job to go out there, find new projects and people who want to support and being part of it all. I have to talk to a lot of different people every day and not being afraid of being rejected. If you’re an animator, you have to focus on the characters in each scene and the acting and sit and really go into that space, which can be very personal. This is a completely different job but we work the same film.

So, I think you need to find that space where you are particular passionate and that’s not something you learn. You may learn to appreciate it but I think most people know what space they’re not comfortable in and what space inspires them. I think it’s all about finding the space where you feel at home. Here’s the thing I realised: You can always do your job but you can’t do a great job if you’re not comfortable.

AW: Yeah, it does make sense.

CK: If I talk to people and have to convince them to be part of the film, I talk about these films like they are my children. If I don’t talk with inspiration or if they feel that I don’t care anyway, why should they care? If I had to put on a mask to explain projects that I don’t particular enjoy myself, oh that would be hard. I think people can feel when you are not genuine. We advance because at the end of the day we care deeply about the work and the creation.

So, it really depends on where you’re coming from and in animation there are so many jobs, from directing to project managing to supervising. As a Supervisor you have to care a lot about every single animator and how they work. Some are very good at acting scenes, some at action scenes, or some thrive when they get many characters at once. You have to figure this out as a Supervisor. So you have to like challenging each one individually because we’re all different and not robots. Everybody has strengths and weaknesses. As a supervisor, I think your most important job is to find out what everybody individually really jumps at. Also you get interrupted every day by animators who need your feedback, meaning you will have to quickly jump to a new scene, focus changing all the time. In comparison to an Animator, you don’t necessarily need to be a great people’s person. You just have to deliver scenes that are emotionally engaging and telling the story and being able to tolerate changes when your scene is not working.

For me it’s very interesting to look at all these different jobs that we have even in our small studio. I think this is amazing when people with different skill sets are completely depending and trusting each other creating something together. It’s like writing stories. When we start writing scripts for movies, we sometimes feel that the script is not right somehow. It can be a character, location or something else that is not serving the story. But we all work closely together giving our feedback until we get it right and it can take years to get right but at least your are not alone. We are all in this together to serve the story as best as possible.