“We basically started with that film”

CK: I’ve known Tomm Moore and the team in Ireland for a long time. When I first graduated, my first real job was to work for them in Cartoon Saloon. I worked as a production manager for them for almost two years, from 2006 when they did their first feature film and series. We kept in touch for all the years after my return to Denmark.

My partner (Frederik Villumsen) came to Ireland years later on an internship before he even had a company. Frederik is younger than me, so we didn’t study or go to school together, there is a 7-year difference between me and him. It was his first internship from the school (The Animation Workshop) and he got a bachelor degree afterwards. He met Tomm and asked him about his next film which was Song of the Sea. Frederik said he was planning to set up a studio in Denmark and asked Tomm whether he would be interested in co-producing with us. Tomm said, “yes, sure, if you can find the money we can talk about it” because Frederik was just an intern asking him, it was probably a very strange question to get. He came back to me and we actually got some money and then we went back to Tomm. Tomm was like “really?” and that was the way we became partners. 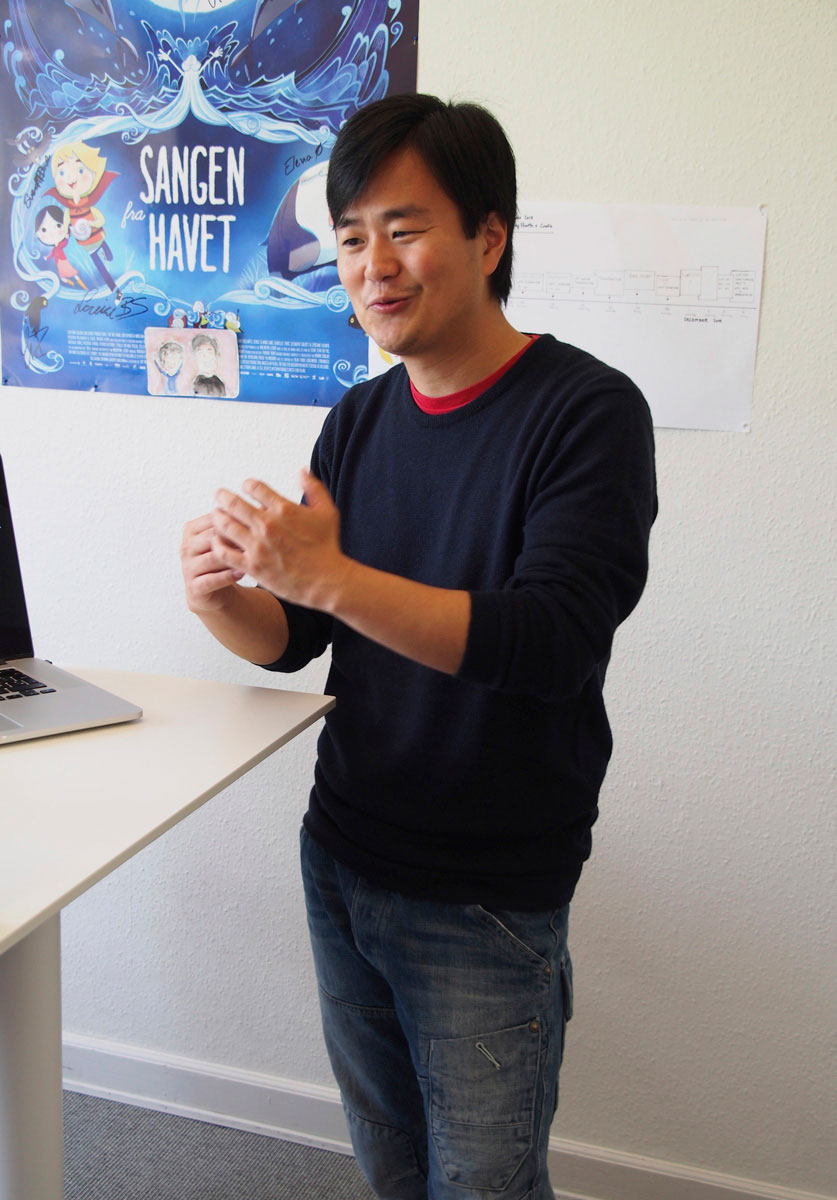 AW: When did the project start and what was your studio role in the project in a little bit more detail?

CK: Besides financing on the Danish side and securing distribution for Denmark and Sweden, we would do 35 minutes of all the animation, we also did clean up of characters. Rough animation and clean-up was our part. It was a quite a lot because Song of the Sea had quite the number of characters.

Everything is animated on 1s. We animated every single frame, 24 frames per second for 35 minutes of the film. It was a lot of drawings. Many series animate on fours, sixes or even eights, depending on the style. We animated on 1s and 2s, so it was 24 drawings for one second. It was quite a big challenge because we had to do it all in nine or ten months. It’s kind of hard. In the beginning you always think you’ll be fine because there’s time. Actually, you have to animate 6-8 seconds per week per animator. Some scenes are harder than others of course. Some scenes have five characters running around and sometimes the waves had to be animated on top of that because there is obviously a lot of water in Song of the Sea. Just water can be a whole week of work and you haven’t done any of the characters. The challenge was to look at all the elements in such a short time and plan it, so that we didn’t go too much over budget. It was a nice experience because this is how you learn. Song of the Sea was the first big production for us. At that time, the company was just two years old, no, maybe just one year and a half, after it’s start up. The first job was to finance the film. It also takes time before we could get into production. We basically started with that film.

AW: I heard that staff for Song of the Sea were gathered from 5 different countries.

CK: Yes, Cartoon Saloon in Ireland co-produced with 4 countries in total. So 5 all together. And here’s how things work in Europe compared to America. In America, you pitch an idea and if the Studio likes it they say, “OK, we’ll take it”. They have the finance to do that, so you can basically start right away. In Europe, we don’t have the same money behind the films if you just go to one country. One country and you can only get this much, and some people say “OK, we’ll do it for this money”, but we wanted a higher quality. It would be a shame if you can’t get the quality because you don’t have the money and you know how great it could have been. So we’ll see how much support we can get once we start inviting other countries who also want to do this film. For this production we ended up having Belgium, France, Luxembourg, Denmark, and Ireland as the main studio. 5 countries were putting together finance. The good thing was that we were the first country to get our finance in place. So we could be a part of the first meetings. We had a memorable meeting in Ireland with the Irish and Luxembourg and Belgium came and France was the last one to come. Combining the financing and we almost got the budget we wanted, I mean you can always dream of more. 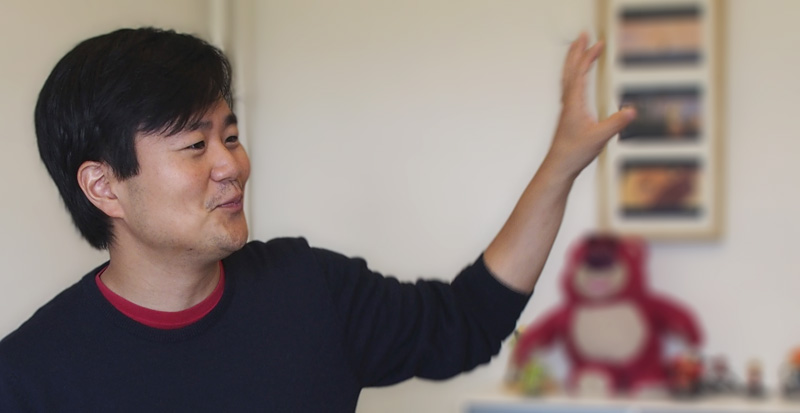 CK: One thing I learned from this process is that we don’t do the same job. We divided the jobs. It was an Irish film. They did the story for the film in Ireland with an Irish writer. The story was developed there. Basically they did all the pre-production in Ireland. Ireland did parts of the backgrounds, and designed all the characters, how they look like, all the voice casting and Art Direction is done in Ireland so we know how the film is going to look like, and even some of the animation was completed there. When we start working, we only had one or two animation tests based on the designs done in Ireland. And then, we and Luxembourg did animation because one studio could not take the whole thing because it was too much work. We could have done it but it would take much longer to produce and cost more money. That was not something the film funds agreed on. So we had to split it. Belgium studio took care of compositing and effects, like colouring, shading and texturing which you can see in the final film, and our French partner took care of the deals and distribution. They did the music rights and contracts. I think it was a nice way to co-produce (Figure 1). Not all co-productions in my experience have clear set-ups. I think you need to be fully aware with the outmost precision for this to work. If we were taking on distribution, I would not be comfortable with that because that is not what we are good at. I think it is important to look at what you can do well and offer your expertise in the exact field of which your interest is. If you can’t make that commitment, it would be good not to be involved because your partners expect 110% from you the same as we do. It’s important to do a good job for each film because the business is so small. If you fail in doing the job, they don’t want to work with you again. If I want to do animation, I have to keep doing a good job.

CK: I was thinking whether I could show you something that allows you to follow the process. Early on the film, Belgium was testing the waves to see how they would move. Based on these references, we animated them. We got the animatic from Ireland. It does not really move a lot. You can follow the story line but you can’t really follow the waves. Song of the Sea has so many different kinds of water animation. It’s a story which takes place under and beside the water so it was challenging.

Before all of this starts, Cartoon Saloon in Ireland made a teaser for show. It was five years ago. They had to do something to show and attract, co-producers/investors. It basically gives you an idea of the overall look although it did not exactly end up like that in the final movie. You always have to do it to make sure that everybody knows what style and feel we are aiming towards. Also for people who finance us won’t have to worry about this. If you just look at the script, it could be anything. They want to see how it looks like. Of course, you can’t afford a lot at such an early stage but nevertheless it’s important to show these things. It is how we show to people what the movie would eventually look like. We do these, to show the character, colours and lighting, but also how it Animates. I especially like the water sequence because it has great colours.

AW: Has each studio contributed to the colours in the film?

CK: No, it is done by Ireland and Belgium in collaboration. They share all of these before we started. So we could have an idea how it would all come together. It would be very hard to draw just relying on character descriptions without knowing lights and shades. It’s good to see where the light is coming from. This helps animators too. They can imagine the feeling of the shot. These are the mood boards for the designs (Picture 5-8). These all give you ideas of shadow and light. The lighting in the film is exactly the same as in the mood boards.

We did like the concept art made as a booklet. Each page show illustrations of the film and how we wanted it to be. This is again before the film got made. This was to convince the film financiers that this would be a really beautiful film. This is the character design line up (Picture 9). Now it’s fun to look at and these are the reasons why the final film looks the way it does.

This is the Character Line Up with a clean line (Picture 10). We have a guideline of how each character looks. All these references came to animators and they know how to draw and clean up the lines.

AW: How much staff did you have to animate this ﬁlm?

CK: I think we had about 16 people in total. Not everybody was hired at the same time. In the beginning of a project, there is always a lot of delay. If you have a full crew from the beginning of the film, half of them usually don’t have any work and we have to pay them anyway, also for these people it would be a long and boring day because they don’t do anything. We hired only half of the people to begin with, and in two months into production we hired the rest of the team. That helped us a lot because everybody was always busy and we didn’t waste any of the budget. The problem is if you burn the money too fast, it is the producer’s responsibility. People of course still expect you to do what you promised to do. You are responsible for the cash flow. Some studios went under because they failed to plan the production right and this is very difficult especially in the beginning. It’s unfortunate if the money is not used in the right way. So we spent a lot of time planning how to do this.