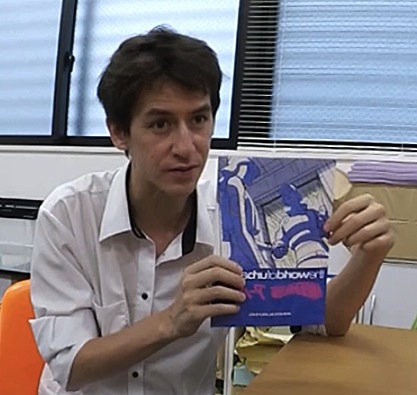 EM: Okay. Our speciality is mainly about 2D animation. Most of the projects, which we’ve done, are about 2D animations. We did key frames and character designs. We worked for Japanese projects, European projects, and any project abroad that we could. Currently it depends on our schedule, the budget, and the style whether we accept the project. We really want to make high quality projects. If someone comes and asks us, “We don’t have money. We want it quick and good quality,” maybe it’s not the right fit.

AW: Do you want to talk about a project?

*16: Urbance is an animation project on Kickstarter

Its project page on Kickstarter: https://www.kickstarter.com/projects/2088672139/urbance

EM: We also worked on commercials, did some movies, and musical clips. We also have some connections with games and did some designs for an application on the iPhone and iPad. There is an App that we didn’t make the animation for but we did localisation. It was a Japanese App from a friend of mine and it’s a very interesting App called Afureko! AR(Video 4). You can dub a character, which you choose in an animation through the App. I mean, you can replace the character’s voice with your own voice. You can try to train by yourself to be a voice actor.

Fun part of the job

AW: What do you find is the most interesting and fun part of your job when you work for animation?

EM: Okay, the problem is that I should be producer but I always like drawing. Most of the time people tell me, “Eddie, stop drawing. You should help your project.” Of course I do this but I really like to draw. It’s really hard for me to lead the company without drawings, but sometimes you have to be serious and do the things that need to be done.

AW: It’s really all about drawing for you, like back when you were a kid and you were drawing in mathematics class.

EM: Yes, when I have time then I take my pen and start to draw but I have to switch between the roles.

Being a producer and an animator

AW: What kind of difficulties did you face in your job and how did you overcome them?

EM: Most important thing is that I need to learn how to be a good producer. This is something I didn’t really learn at school in GOBELINS. Maybe they should have a course on producing, it could be interesting.

AW: I think they have one now, for the last few years. They have a producing line but it’s very separated. It’s not for animators.

EM: If they could teach more about producing, it could be interesting for animators. Now I have both roles. When I talk to a producer, now I understand better how the company is working and what I can ask or not because I’m a producer. When I talk to some producer as a freelance animator, I can understand better producer’s concern. A simple example is the schedule. A producer will always tell you that there is no time. In fact, there is time but he wants to control the schedule. That’s something that I try to learn by myself because when I have time, I give all the time to animators but I shouldn’t. I should tell them that it’s shorter to have a kind of time cushion. It is because so many animators don’t always respect the time, but for me, I like to give a lot of time to animators. This is just a simple example. There are many like that.

AW: Could we ask you about the vision you have about the future of your studio? What kind of animation would you like to create? You said high quality. Do you have any ideas?

EM: When we are working for clients, we try to provide the best quality we can. We have many ideas, of course. The goal is to make our own projects. Maybe if we can make a movie and if it can be seen in Japan and around the world, I would be really really happy. At the moment, my objective is to make money to make our own projects and then find a great producer, a great investor or sponsor to invest to make something bigger and stronger.

AW: What is the hope or plan of development of your studio? Do you want them to get bigger, or would you like to stay with this size and hire freelancers?

EM: I plan to get a little bit bigger. At the moment, we have very few people and most people working with us are freelancers so we really want to hire people as soon as we can and if I can, keep them. It is almost two years since we started. There are many artists who we meet in the studio or work with. I would like to keep most of them, not all, but most of them. It requires some funds. That’s why I plan to find a great project and hire them and to create the best team possible.

Having a mixed talent team

EM: I just want to add something, it’s that when I said, “team”, that is not only Japanese people but it’s Japanese people and people abroad so it’s a mixed team. I will insist on the fact that Yapiko Animation is not a company working only with one type of animators but that it stays really international. We want the skills of everybody, not only one type of people, that’s why we have an office in Paris also. 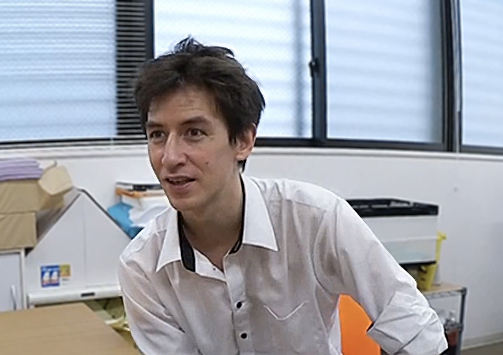 AW: You mean that for 2D animations, you use not only traditional paper animation but also Flash® or other types, doesn’t it?

EM: I think that we are the only company who use every type, G pen, hand drawing, and Flash® and so on. Recently, for example, on Urbance, we had some animators who asked for hand drawings using G pens, some others were using Flash®. We managed all those techniques together because at the end, all is numeric on the computer so it’s not difficult. We just have to scan in the paper animations.

AW: I didn’t know you could mix 2D techniques within the same project.

EM: It’s faster to make it all by CG, but there are some good animators in Japan who don’t know anything about CG. They don’t really want to learn so they want to stay on paper. If you do it all by CG, there are some good animators whom you can’t work with and it’s a waste of talent. If you can still work with paper, then you can hire them and have their experiences.

Important things to be a good animator

AW: Do you have any general advice for those who want to work for animation?

EM: It’s what I said before, “motivation and time.” It’s time consuming to make animation. If you’re not patient, it’s not for you. Patience is really important because you will work hours and hours for a few seconds of moving characters. But when it moves at the end, you are very proud and it gives you great satisfaction.

AW: Are there any projects you would like to mention or promote or you can share with our readers? You talked about Urbance, but is there anything else?

EM: Sure. There is a project that we plan to launch very soon. It’s called Plume (Picture 3 and 4). This is a project that we expect to launch on KickStarter. It’s done by a European artist and will be adapted by Japanese animators, and we want to make a pilot film first and then we will see what we can do with it. At the moment we are thinking about a TV series.

AW: The Plume project, it’s for an international audience, are looking for sponsors from France or America? I think that a French TV channel could be interested in it.

EM: Yes, exactly, that’s something we are looking for. We can’t wait to make the pilot to show everybody how amazing it can be! There are some other projects. There is another called Iron Vandetta. It’s more for the Japanese market, so maybe we have to prospect a Japanese company for sponsorship.

Easy to work with other studios in Japan

AW: If possible, could you let us know any studios, which are attracting your attention with interesting projects? Are there any studios you would like to work with in the future?

EM: Actually, we are working with pH studio (*17). It’s a compositing studio but we also have a partnership with Studio Colorido (*18). It’s a young studio with really young talented animators in Japan. Most of them are working on CG.

EM: It’s Flash®. What really interesting in Japan is that it’s really open to any studios. It’s really easy to work with any studios so I don’t have a specific studio in my mind, which I want to work with. It depends on the project. If it’s realistic animation, I will maybe ask Production IG (*19). If it’s more cartoonish, I will ask some more cartoon animation studio like Trigger (*20) or something like maybe GAINAX (*21). It depends on their schedule because they are really busy too. It could be another studio where the name is less known but there are so many possibilities in Japan to work with different studios. It’s more difficult in France.

AW: Yes. In France I feel there is a little bit of competition.

AW: In Japan I feel they are all collaborative. They work together and there is no feeling of being betrayed or something. It’s friendlier, like a big family.

EM: Yes, exactly. But I will say that 80% of animators in Japan are freelance so it’s not in the interest of companies to close their doors. If they are closed, they will lose freelance workers and it’s not good for the companies because Japanese companies lack of animators and they need animators. They need to be open to working with other companies; otherwise they won’t survive.