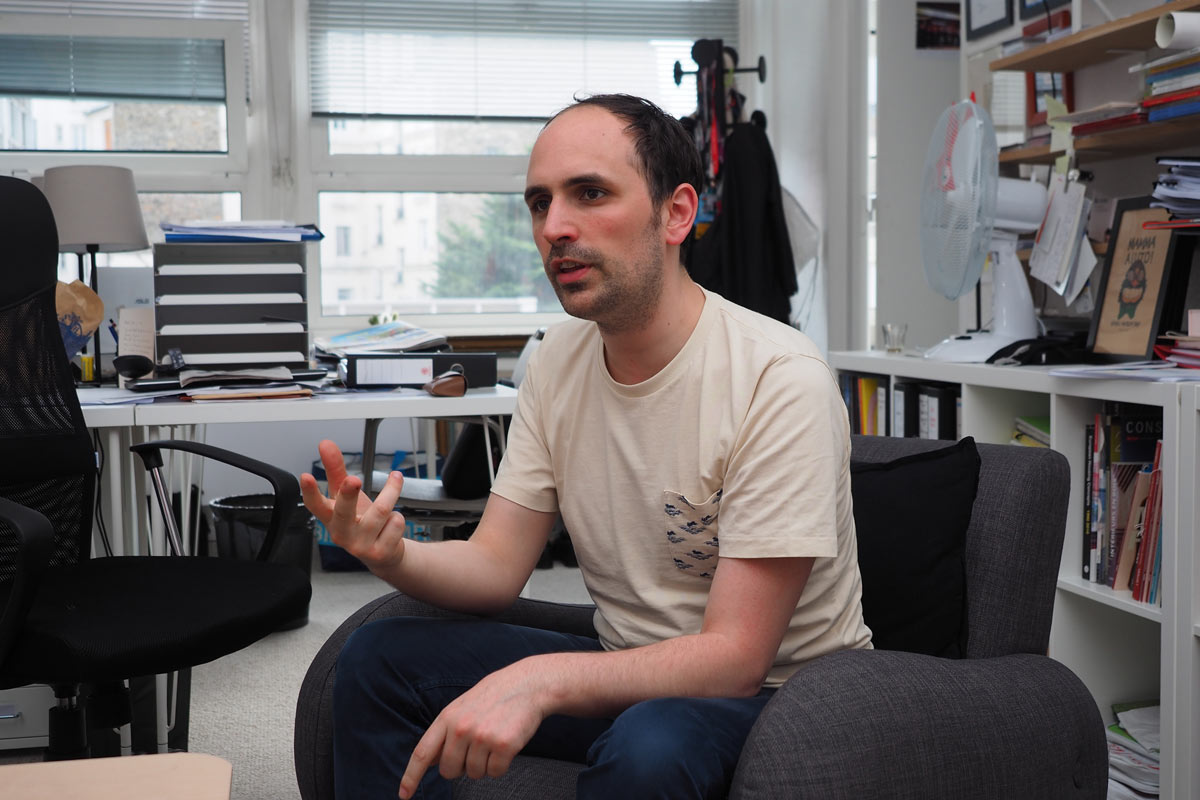 Developing the right visuals while keeping the original vision

The visuals of Ernest and Célestine resemble watercolor-style paintings with a lot of texture. Renner says, “We have to find the right balance and the right mix. So, we tried to keep the spontaneity of the drawings as something that felt rough, but also not so rough that it’s shaking everywhere. We get the family of Gabrielle Vincent to sometimes check if it was looking okay.”

The Big Bad Fox and other tales…

After having success with Ernest and Célestine, Brunner had a chance to read a comic that Renner was drawing.

Brunner recalls his first impression when he started reading it, “It was so funny and a huge pleasure to read the book that I immediately thought that we must make something with these books for theatre or television. I proposed to Benjamin to make an adaptation of this book, but a self-adaptation, as it was a nonsense to propose to another director about adapting the book”. The project started to take shape. 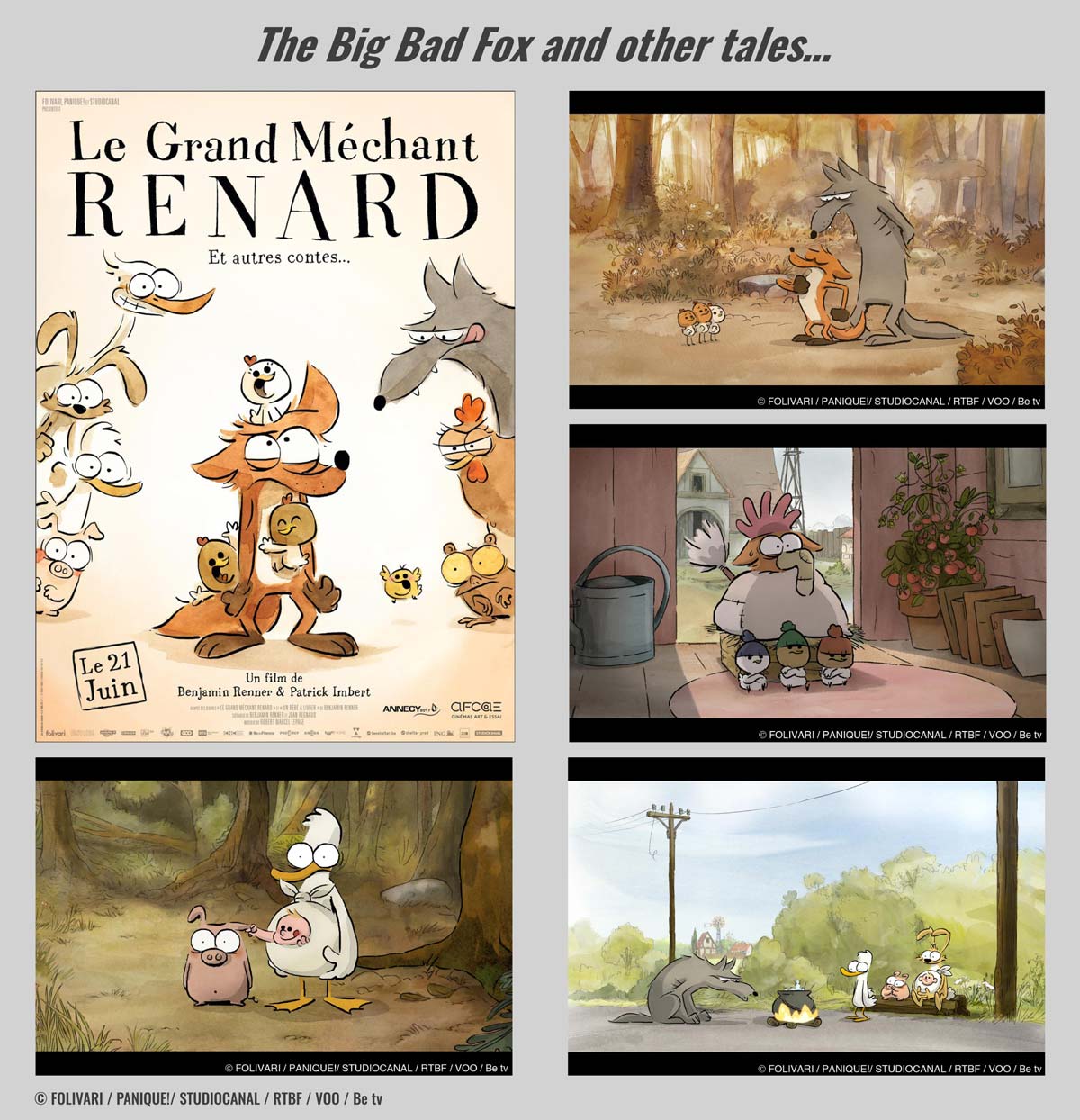 The origin of the animal characters

One of the attractive points of The Big Bad Fox and Other Tales… is having lovely and enjoyable animal characters.

Renner explains that his fascination with the animal characters comes from his young age. “In France, we have a very famous author, like in 16th century, I’m not sure, but she was always telling tales about animals, like the crow, the fox, and the story of a rat and a lion, and I really loved the stories. I always loved those little stories because they told a lot of things about humans, but with animals, so I think when you use animals to tell something about humans, it always feels true because it’s animals, it’s like a tale and feel like it’s connecting with the others. And when I directed Ernest and Célestine, I already had the idea of The Big Bad Fox and Other Tales…, but it helped me a lot to make connections between Ernest and Célestine and The Big Bad Fox and Other Tales…, even if it is not obvious. I know I wouldn’t have made the same graphic novel had I not made Ernest and Célestine.”

The initial idea of the story goes back to the time when Renner was very young, like around 6 years old. One day, he visited a farm and there were eggs ready to hatch. He wanted to see the eggs hatch, but his father told him not to stay there because the little baby chickens will think Renner is the mother when they see him first. Renner thought that he’s not yet ready to be mother.

This little story stayed in his mind and kept wondering: “How is that possible? What would happen if I had to raise those chicks? Would I have to teach them to be a chicken or would they learn how to be like me?”

After Ernest and Célestine, he thought it may be the right time to finally create the story, and started drawing a graphic novel. He says that animating the story was in his mind, but he wanted to make a story quickly rather than taking five years to develop.

There are a lot of funny stories in The Big Bad Fox and Other Tales…. Renner describes that coming up with these ideas was a very abstract process. “I was inspired by my three nephews who are much like the chicks, in the way they act, how they are very grumpy, and everything about them, so I thought out in the book how to express what I felt with them. As I do that, I just drew sketches and I drew a lot, lot, lot, until I have an idea that makes me laugh, then I try it that way, I find out it’s not very funny, so I try another way, until I have an idea that’s funny. It’s almost like acting, improvising in theatres, except it’s in drawing. Making lots of scenes and sketches is the key.”

“I always wait until I have a completed first draft to show people, so they can have the complete experience when they discover the story”, Renner says. By doing that, he gathered a lot of feedback for The Big Bad Fox and Other Tales…. He thinks about it, and keeps it or redraws it when necessary.

His drawing style of this work came to him naturally, as it was the style that he had for years. What was difficult for him was explaining how to animate to his team. He gives an example: “When you draw a fox for the animation, it is obvious in my head how he would look from a certain angle, but it is not for others. I have to find a way to express that to the team, so that they can draw it right.”

The Big Bad Fox and Other Tales… is full of fun action and movement. Each animator is key in bringing the animation to this level. Renner explains that an animator is just like an actor who is good at sensitive scenes or action scenes. “It is almost like a casting actor for each sequence. You’re not going to ask Woody Allen to play in an action film. For animation, each animator is working on the same characters. You have to ask them to do the right things.”

“For example, the little chicken in The Big Bad Fox and Other Tales… is only done by one. He was really good in making that. We don’t know why.”

Music and voices matching the story

Music for The Big Bad Fox and Other Tales… is produced by a Canadian producer. Renner says, “I can’t play instruments and I don’t listen to much music, so I don’t have knowledge of music, so I completely trust him.” He composed music based on the storyboard and animation that Renner sent. He tried to propose a lot of compositions and they discussed to find the right music. For example, Renner says, “During the whole process of production, we discussed things like: ‘Here, I think it should be more intense’, or ‘I think there is too much music here. You should put more like this’. I like to let people express themselves, and I don’t want to be the kind-of composer.”

Another major part of animation is finding the right voice. Voice decides the funniness of the scene in addition to the animation. Renner says, “You have to be sure it’s going to be funny, even when you just listen with no pictures. If you’re laughing, half of the job is done.”

When Renner starts working on the drawing, the first thing he does is to think of the voice. He draws a lot of poses just to explain exactly what he wants. “For example, if on a sentence at some point in the story I’m already convinced that I want the character to look like he’s saying something like ‘yeah I’m not sure about that’, I’m drawing this pose so that the animators knows that he has to do that. I don’t want to just have animators connect the dots, I really want them to be able to express themselves, so we try to find the right animators and try to give them the exact kind of scene that they are good at making.”

They developed some guidelines, and after that, Renner explains to the chief animator, Patrick, every detail he wants to have, and Patrick tries to achieve everything possible. They discuss the capability and practicality of it and found a common ground. 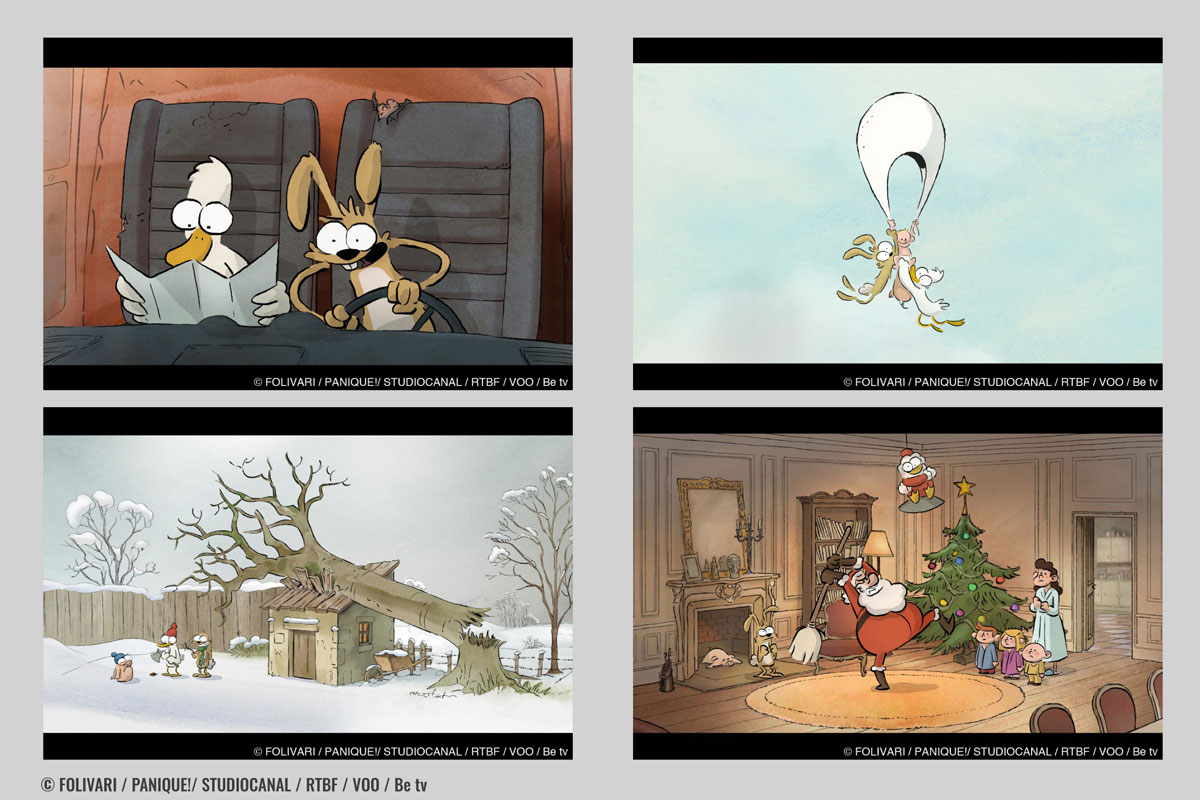